UConn has a split personality. On the one hand, it’s a modern University with a top tier basketball program known the world over. On the other hand, it’s an agricultural school at heart; located in a very rural setting with a very pronounced farm feel. Students are constantly reminded of the aggie aspect of the school when they eat in the dining halls… that ice cream they’re eating? It’s made right here. 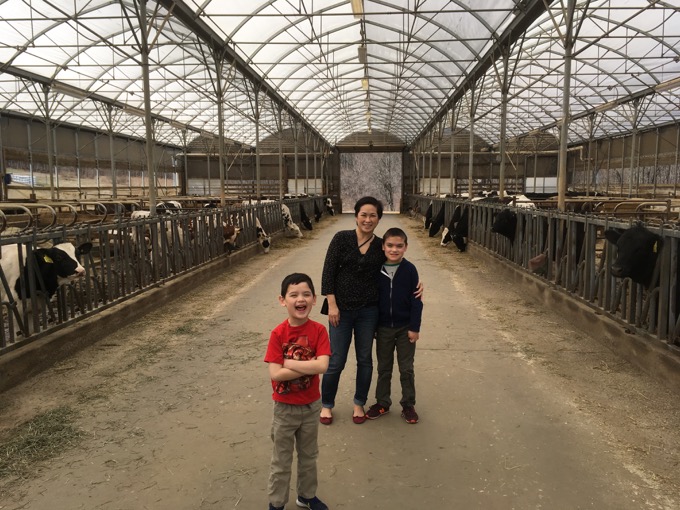 This, and the other larger format are from 2015 or so.

Now, of course I realize this isn’t unique to UConn and tons of other schools have their own creameries. But not in Connecticut, and that’s all we care about on this website. If you visit Storrs, you’ll invariably stop for some of the best ice cream in the state at The Dairy Bar. If you do – and you really should – be sure to pick up some of their cheese as well. I did, and it was delicious. 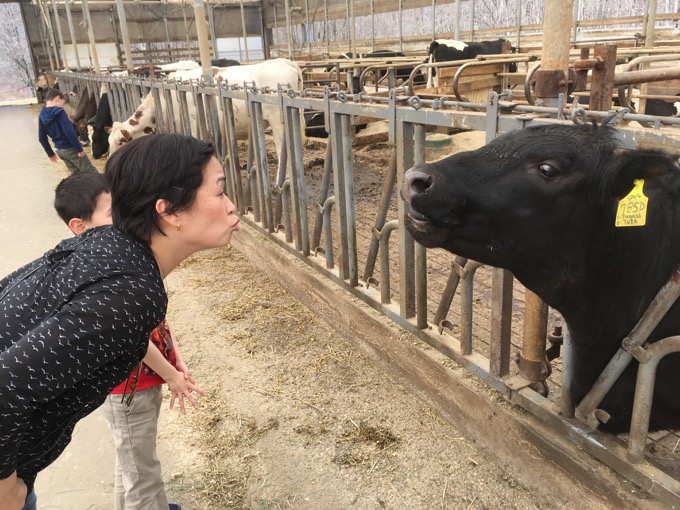 The UConn Dairy Bar, or Dairy Product Salesroom as it was originally named, opened sometime between 1953 and 1954 to sell dairy products that were manufactured by the Creamery. The Creamery had been used exclusively for teaching and research. A 1917 UConn Course Catalog refers to the Creamery and describes courses taught in Dairy Husbandry such as Milk Testing and Separation, Milk Production, Ice Cream Making, and Butter and Cheese Making. The retail facility now features a red, white, and black color scheme, ice cream parlor-style chairs and tables, several bar stools taken from the old location, and an observation window for viewing the ice cream making process. The Animal Science building is named after George Cleveland White who served as a Professor of Dairy Husbandry at UConn from 1914 to 1944. He taught Milk Production, Cattle Judging, Animal Nutrition, and Herd Improvement classes. 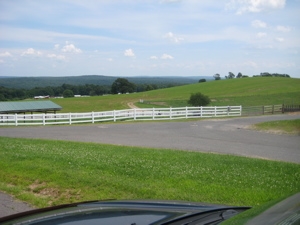 While at the dairy bar, there are little signs and brochures encouraging you to check out the animal barns as well. While the Dairy Bar is situated amongst the animal science academic buildings, there exists a nice loop around Horsebarn Hill to tour. So, of course, that’s what we did.

Well, Damian and I did – a couple months after we visited purely for the ice cream with Hoang. We ate a picnic lunch outside the dairy bar, denied ourselves ice cream and checked out the animals as well. The school provides a brochure called “Follow the Animal Trail: A children’s guide to the animals at UConn’s Storrs campus.” 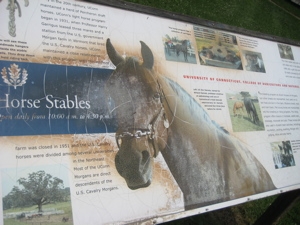 Our first stop was at the horse stables. About 85 horses live in UConn’s Lorentzon Stables and other barns on Horsebarn Hill. Most of the horses are Morgans, Thoroughbreds or Quarter Horses and they are used for educational purposes, riding lessons and polo games. Polo games? Pshaw. I’m sure they just mess around…

All the places we went are open every single day of the year from 10AM until 4PM for visitors to simply walk around and do whatever they want to do. Which is nice when you have a Damian with you. Trust me. 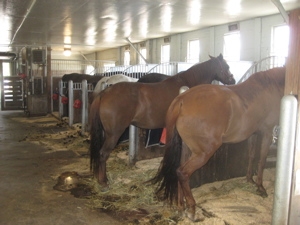 Two students were grooming a couple of horses outside the stables when we arrived and pretty much ignored us. Damian wanted to pet the horse (of course – no matter than they are HUGE) so I asked the girl, “Can he pet her butt?” She laughed at me and essentially thought I was an idiot. What I meant was I’d have held him up to pat the horse’s flank and call it a day. But we didn’t and entered the stables. 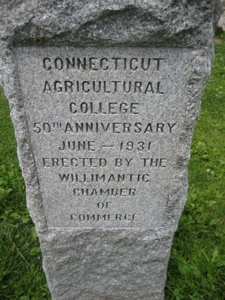 Here, Damian could have walked right under a horse and hit it in its belly. He could have jammed his arm down a horse’s throat or stood on his head in a large pile of excrement. I was pretty surprised by the lack of safety precautions. I’m sure some negligent parent will allow their dumb kid to mess with some horse someday and… you know the rest. There was some more stuff about equestrian teams and that silly ol’ polo team again on the walls here as well. 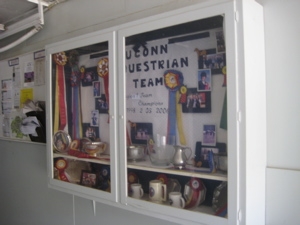 We left and watched the horses grazing and being groomed a bit more. They really are beautiful animals. Random fact: US Calvary horses were all Morgans from a the Morgan farm in Vermont. Back in the 30’s and 40’s, UConn’s president was friends with the Morgans and got a couple horses for the school. The Morgan farm (and US Calvary program) closed in 1951 and UConn got a bunch of the Morgans. Those there today are direct descendants from original US Calvary horses. Cool, huh?

Ever notice that horse women are all a bit weird? They are. But I may have spotted one of the coolest… ever. Here she is, eating a subway sandwich of some sort, watching her horse: 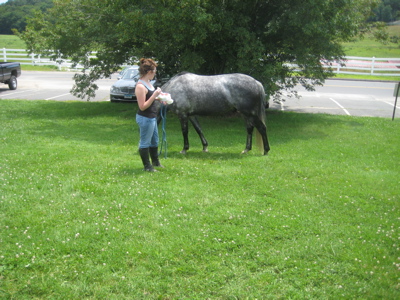 Hm. What’s so great about her? Let me zoom in on her triceps tattoo… 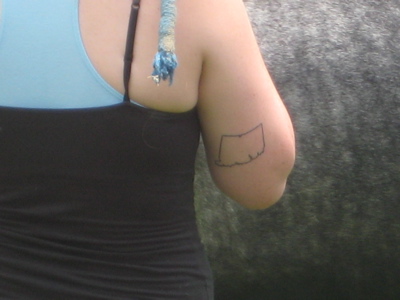 Swoon. She even has the Southwick Jog!

Before moving on, we checked out a mom horse with her foal. Damian ran right up to the horse and touched her nose. That kid is crazy, I’m telling you. (Or I am, I guess.)

After a brief stop at a picnic spot, Damian wanted to go into a red building. I was sure it was locked and he’d have a tantrum, but appeased him and we crossed the road. This was the Horsebarn Hill arena…Whatever that is. 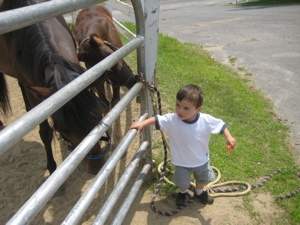 We entered and there is a room full of horse stuff and horse people stuff and more horse stuff. There’s even a picture of several horse posteriors. There was another door and it was dark behind it, but we pushed onward. We opened the door and – Whoa!

A giant horse arena thing. Was this here when I was in school? No – It was built in 2001. At 120 by 220 feet, UConn’s arena is one of the largest and newest in the country. The year-old arena includes a heated lounge, dressing rooms and an office. That’s nice. But polo? 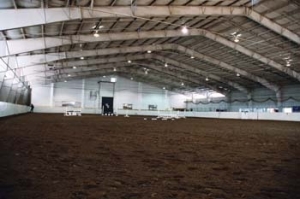 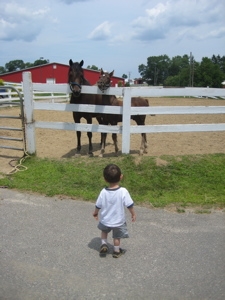 Still, that’s pretty cool. I’m not versed in polo and it seems pretty silly to me, but I’m not rich so what do I know? There’s even video of one of their 2008 National Championship:

That was my surprise for the day. Next time some Dukie or Pitt or Syracuse fan starts an argument about the Huskies, I’ll smugly ask them how their polo team is doing. There is a nice picnic spot across the road from the arena and another horse stable. I had no idea UConn had so many horses. 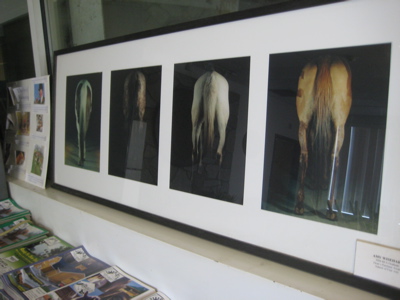 We drove past the sheep and pigs as those buildings didn’t look too inviting. (I think the pigs are closed to visitors anyway.) It was shortly after 1PM at this point, so I drove up the steep hill to the Frances E. Osborne Kellogg Dairy Center. Daily milkings are done around this time and I thought it would be cool to see where the anticipated ice cream came from. 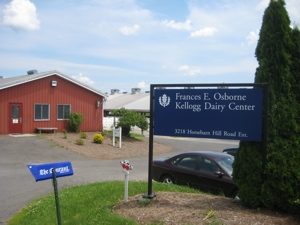 The Kellogg Dairy Center was only built in 1991 so it’s a modern free-stall facility and milking parlor. Approximately 100 Holstein and Jersey cows are milked 3 times a day here, every day of the year. The milking is done using a milking machine and each cow squirts out about 10-11 gallons of milk per day. Phew. 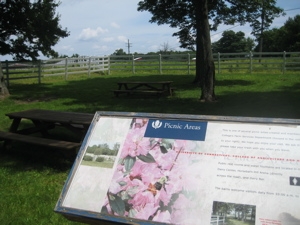 Damian and I entered the lobby and enjoyed a few small exhibits (UConn’s dairy history, milk bottles, milking technology through the years) and then walked down along the cows about to be milked. None seemed to be in the “parlor,” so we went outside and found the calves. Awwww, there were about 10 little calves here and Damian was able to pat them on their heads. 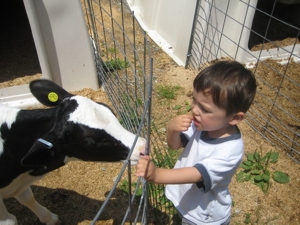 And they were able to suckle on his arm. I guess his little arm is about the size of a milk-swollen teat. That calf latched on and gave him a good tug. Instead of freaking out like a normal kid, our little Damian just laughed and laughed and wanted some more. I wasn’t so enthused. 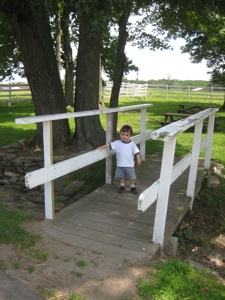 Apparently we were going to miss the milking, but we did go into another cow barn and Damian enjoyed walking right up to various cows. I had to restrain him from getting on his knees to taste a salt lick. That was my cue to move on. 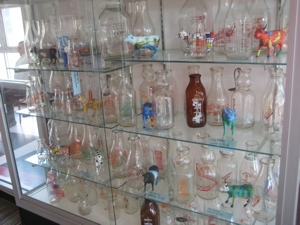 The chicken houses are next to the Dairy Center, but it’s not open to visitors. Hidden from us all are over 1000 chickens – mostly bantams and Leghorns, with some Buff Cochins and Old English Game Bantams thrown in. The chicken houses were signed as “Historic Poultry Houses” for some reason; my guess is that they are old and torturously hot, but I’m just guessing. I should also mention we skipped the 40-strong flock of sheep as well. 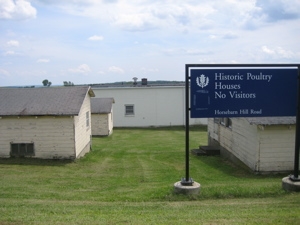 We hopped back into the car (a more mobile family could walk the entire Horsebarn loop; it’s a little over a mile I’d guess) and drove down to see… More cows! These were the beef cattle – mostly Black Angus and Herefords. Again, Damian was allowed to run rampant into the pens with the 1500 pound beasts. I chased after him and scooped him up quickly- just in time to see this: 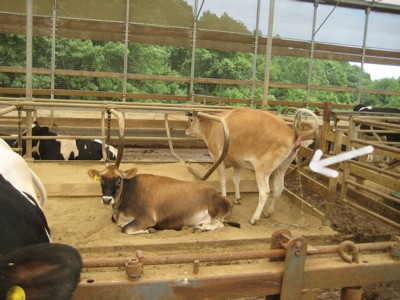 Which Damian got a big kick out of: 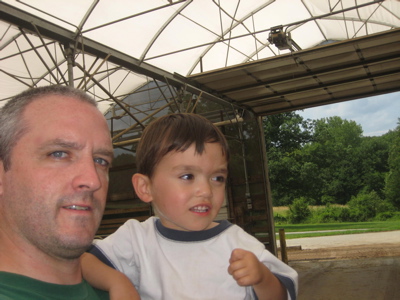 (That’s him signing “potty” and laughing.)

Several years later, Damian still loves the cows… perhaps a bit too much: 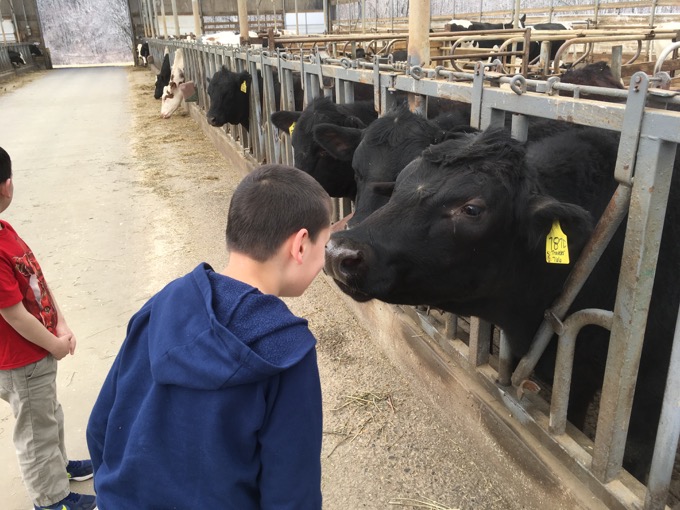 Ahhh, good stuff. These cows were pretty comfortable in their shaded tent-like building and they of course graze the hill. The cows here are not given any growth hormones or anything and are pretty much grass-fed. I don’t know if/where they sell their beef though. And frankly, I don’t really care since I don’t eat the stuff.

We were all done with the UConn Animal barns after an hour or so, but Damian felt like joining a nice family. He simply walked over to them, plunked himself down in front of the two moms and just smiled. He posed for some pictures and tried to get the little girl to run around with him, but she wasn’t into it. 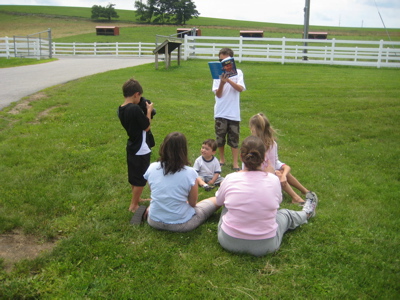 After a few minutes he leapt up, yelled out “DA!” (“done”) and walked away. My kid cracks me up sometimes.

We went back up to the Dairy Bar but there was a line of people 20-deep and Damian was hitting the wall. So we saved ourselves 1000 calories each and hit the road. All in all, visiting the Dairy Bar and Animal Barns up in Storrs is always a good – and free – bet. Plus, they are open 365 days per year.

During our full family visit, we did walk a lot more, including running to the top of Horsebarn Hill. I believe we’ve now done everything we can do with the UConn Agricultural School. 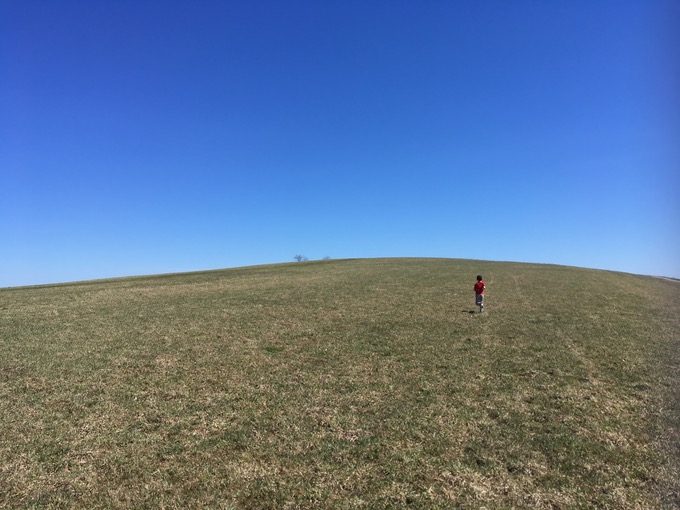 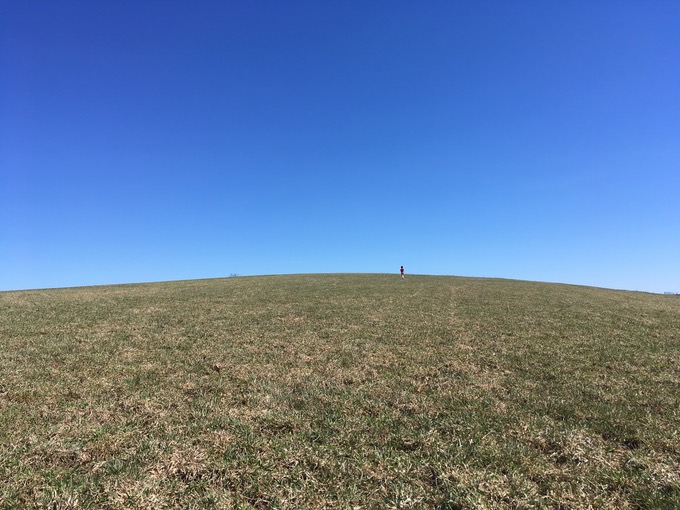