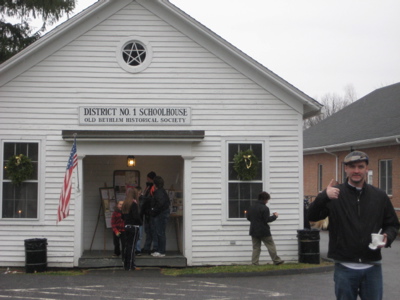 (The use of the word “Bethlem” commemorates the original spelling from the 1700.)

Hoang, Damian and I drove out to Bethlehem on a cold and snowy Saturday to enjoy the Christmas Town Festival. Bethlehem is a rather unique little burg and you can read all about our Christmassy adventures here. And aside from the historical society museum, there is also a Connecticut Landmarks property (the Bellamy-Ferriday House) which happens to be the site of the first theological school in the country (CTMQ report here). 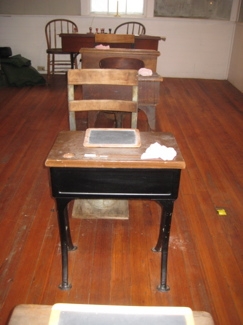 After getting our bearings in the midst of the rather low-key Christmas Town Festival, Hoang and Damian warmed up with some chicken noodle soup in one of the buildings selling crafts while I surveyed the outdoor scene. I was, of course, immediately drawn to the little schoolhouse right in the center of all the hubbub. I entered… And immediately qualified this place as a museum unto itself. (Later, I found references to it as a museum – one that is only open to the general public once per year, during the festival we happened to be enjoying. We’re awesome.) 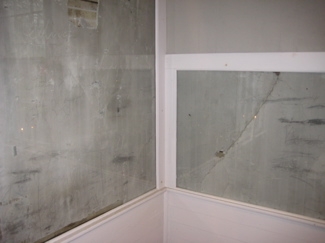 The room was blazing hot; probably around ninety degrees which really wasn’t all that bad considering the chill outside. With a docent average age of 80 or so, I guess I shouldn’t be surprised. But man, it was h-o-t hot hot hot. No need to take off my coat though, after all, this was only a one-room museum by virtue of its one-room schoolhouse-ness.

A quick look inside revealed nothing new or different when compared to the other restored schoolhouses that dot the state. But a closer inspection of the signs and after a few chats with the helpful women inside highlighted some really cool stuff. Notably, the restoration efforts have uncovered several different pieces of graffiti from over one hundred years ago. Stuff like a line marking the height of Flossie Box in 1896. 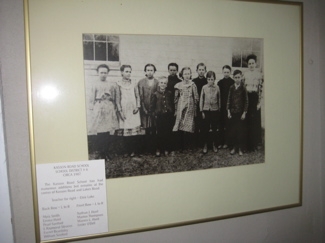 Not only that, but also a long ago grammar lesson that was never erased. A 1995 New York Times article highlighted some of these things, and I’m about to highlight those highlights for you. While I think it’s pretty cool that the Times felt this little school house in this little town warranted a puff piece, I’m not really sure why. But then again, I’m the guy blogging about 700 museums in Connecticut, so I’ll shut-up on that subject.

Flossie Box wrote her name on the wall of her classroom along with Florence and Albert and Melvin and Margaret. It was Sept. 12, 1892, and the children were students in District No. 1 schoolhouse in the center of Bethlehem. Four years later the school was modernized and the walls, covered with children’s names and chalkboards bearing English and mathematics assignments, were covered over with wood lathing.

There they remained while the building went through a series of uses. In 1914, Bethlehem’s nine schoolhouses were consolidated into the Legion Hall. In 1926, a new four room elementary school was built on East street. In the meantime, the town library established itself in the little clapboard schoolhouse that had served District No. 1. The attic and storage space were filled with school books, library books, maps and pictures of the Presidents. Then in 1968 the library moved into a new structure, and the Episcopal Church took over the building, using it for their summer fair and other events.

It was in 1991 that the Old Bethlem Historical Society made the decision to invest $1 in the purchase of the 1865 schoolhouse, did invest and then began to figure out how best to set about restoration… Volunteers started restoration in a spurt of energy, said Douglas Tolles, current president of the Historical Society, “but when we uncovered that graffiti we quickly slowed down and tried to preserve as much as we could.” They also uncovered pencil marks indicating the height of both Flossie Box and Raymond Thompson on Dec 18, 1896. 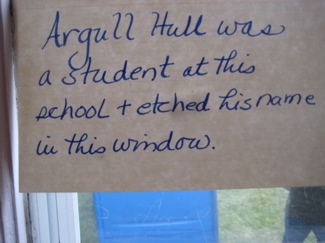 … Behind lathing. in the attic, volunteers discovered one strap-on ice skate, and two pairs of rubber overshoes, one made by the Goodyear Shoe Company of Naugatuck, patented 1868. Also under the 1896 wood walls was horsehair plaster from the original construction.

Nowadays, last century’s graffiti is displayed under glass and copies of original attendance records from that schoolhouse sit on the teacher’s desk. “Some kids would miss entire terms,” Mr. Tolles said. “It was just too hard to get here in the winter if you lived far out of town, or farmers’ children missed the summer term.”

Argull Hull, who started the Argull Hull Fund for the First Church of Bethlehem, United Church of Christ, etched his name into a pane of glass at the old schoolhouse… 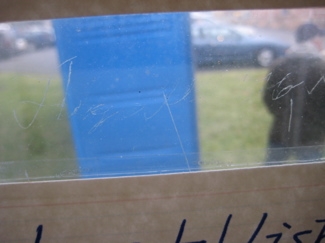 It was while I was trying to get a good picture of Argull’s etching that one of the women approached me and launched into some Bethlehellanea. (At least that’s what I’d call it if I lived there.) This Argull Hull character turned out to be quite an important and rich businessman who, as you just read, started the first Church of Bethlehem. I’m not sure, but I think there is still a fund in his name there.

While I poked around, some of the docents and guessed discussed which of the two churches they attend in town and why and for how long. Geeze, you’d think here in Bethlehem they’d all know each other’s business! 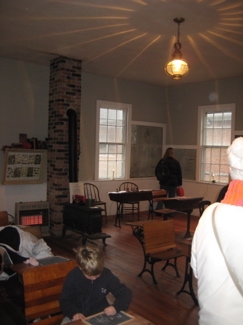 I poked around some more and was definitely impressed with the restoration efforts here. The glass over the original horsehair plaster is really unique and the preserved blackboards and graffiti is not something I’d seen before in my previous museum visits. Also, the schoolroom itself does not try to be anything but what it is – a preserved one room schoolhouse. Appointed simply with desks, a wood stove, books and some tables – oh wait, there’s another weaving wheel thing! I can’ t get enough of them!

I was fortunate to happen upon this museum on it’s one open day of the year (though I believe you can make an appointment, if you’re so inclined), but regardless of that initial excitement, the museum is darn interesting on its own. 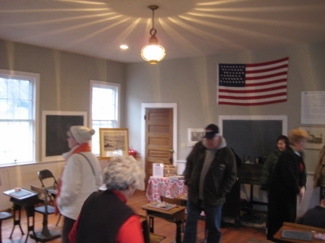