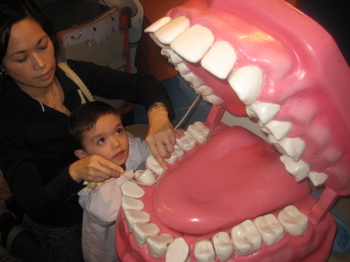 Go to enough children’s museums and they all start running together in your memory. Of course, I can’t imagine many people would go to every children’s museum in the state, so in reality, there’s nothing wrong with that. Especially if they are all relatively good – which they are.

“Children’s” is a weird word when you say it enough times.

A few stand out though and the reasons are sometimes barely discernible. Hoang really liked Stepping Stones; perhaps more than most of the other ones we’ve been to and I don’t really remember quite why. It was more spacious than some others and for whatever reason, Damian seemed more engaged than usual. This was odd because we visited during the museum’s birthday party – and it was packed. (It was also free, which is our favorite time of year.) 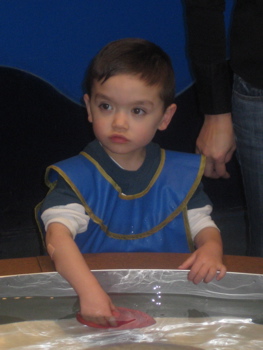 One reason (though certainly not Hoang’s) this place is great is because it stands right next to two other museums, both having nothing at all to do with Stepping Stones or each other. There’s the Center for Contemporary Printmaking (CTMQ Visit here) and the incredible looking Lockwood-Matthews Mansion. Not to mention the many other museum and great places to eat just down the road in SoNo. With kids, you can’t go wrong with this place and the aquarium a mile or so away (CTMQ Visit here).

I want to note at the outset here that Stepping Stones has gone through a rather impressive renovation/expansion since our visit, so I cannot say if anything we experienced is the same these days. I can only assume that the museum is bigger and better though, which is probably reason enough for us to revisit someday… which I’m sure we’ll do with child number two on the way.

We made the drive to Norwalk during a monsoon. No, it was more like a hurricane. Sideways heavy rain and gale force winds. As if that was going to stop us from a FREE museum day?! Puh-leeze. Unfortunately, it did stop a lot of other people a little later on in the day. The following news story is a little creepy because after Stepping Stones, we went up to Westport and then north to Weston in the mid to late afternoon. While driving up route 57 to the incomparable Weston Woods (a href=”https://www.ctmq.org/?page_id=13780″>CTMQ Visit here), trees were down all over the place and our visit to the campus there was marred by a rain so hard it was almost blinding. Yes, people died:

Just adding a little flavor to the story with that news clip, that’s all. It was a right miserable day to say the least. And so, what’s the best thing to do after getting soaked in the parking lot? Head straight to the water activities! 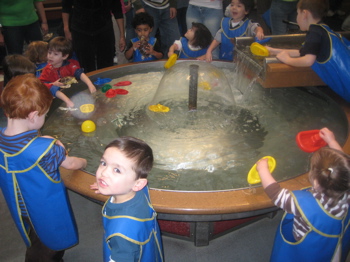 You know what’s crazy? Perusing the Stepping Stones website, I don’t see that they still have all this water fun on, ahem, tap. Perhaps it was part of their pledge as part of their upgrade: “Our new museum is designed to use 25% less electricity and 30% less water! than a standard building.” Actually, I seen now that it has been incorporated into the new “Energy Lab,” which sounds a tad more interesting than just the water stuff. Check it out – your kids can learn where uranium comes from!

“All-new and all-awesome, Energy Lab is a wet, wild and wonderful way for children to learn about the science of energy. As they use their boundless energy to explore the million-dollar exhibit, they’ll find a “working lab” that inspires a natural curiosity to imagine and invent.” 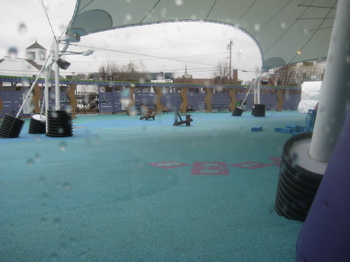 I know I overuse the word “awesome,” but we post-ironic bloggers have license to do that. Museums don’t. Anyway, Damian (as we’d expect) LOVED the water lab stuff. He even tolerated the little waterproof smock we slapped on him. Behind the Energy Lab area is something called Tot Town which looked like a blast. We didn’t venture in because Damian is such a big boy now, but it looked really engaging for the little kids.

Outside is the Celebration Courtyard which is huge and looks like it hosts a ton of fun stuff. I’m sure the museum had a few outdoor things planned on their birthday, but that wasn’t happening during our visit. There are a lot of things to do out there, when the world isn’t ending. 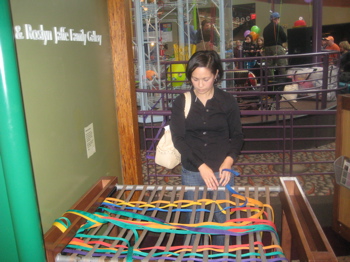 I sure as heck know Damian’s favorite would be their “sleek new 14-foot bubble exhibit that not only showcases the art and science of bubbles, but it’s also the place where tots are always welcome to “pop in and play.” That may be reason enough to revisit soon.

There is a gallery central to the museum where all sorts of performances take place. During our visit, a band was rocking out kid-friendly tunes. Since Damian can’t handle such noise, we scurried through that area and settled into the next exhibit area. This sort of bummed me out.

Proven to stop everybody from 1 to 101 in their tracks, the absolutely mesmerizing ColorCoaster is a 27-foot kinetic sculpture designed by artist George Rhoads. The museum’s only permanent exhibit, the ColorCoaster is a non-stop giant 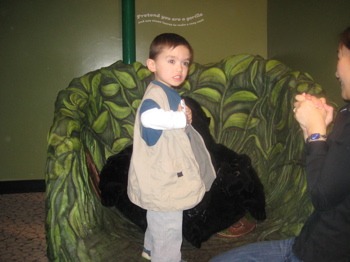 mechanical toy that uses energy, motion, gravity, color and light as it spins, whirs, fascinates and delights onlookers of all ages!

And so, we moved on into a Rainforest exhibit area. Even after struggling to get Damian to leave the water area, we quickly came to realize that Stepping Stones knows what they’re doing when it comes to engaging little kids. Damian is oftentimes daunted by crowds and loudness. But the activities and hands-on stuff here superceded anything else.

We watched on eggshells as Damian encountered situations that we felt might precipitate a meltdown. But nope! He never seemed to mind – which was rather amazing. As you’ll see in the pictures, he even allowed us to put different outfits onto him throughout our visit. 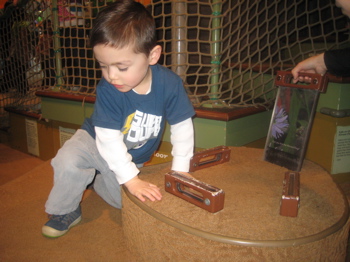 And know this: Damian does NOT let you put random outfits onto him. Ever. (Granted, each one lasted for less than a minute, but the pictures can lead us to believe otherwise.)

The exhibits were great for a couple reasons: They all seemed to be in working order, none were overly whizz-bangy, and they all had cross-age appeal. While Damian had fun with some of the younger activities, older kids could read about the plight of the rain forests and what the loss of their biodiversity could mean. While Damian tunneled through a worm tunnel, older kids got to learn how worms tilled the soil and reduced compost to usable fertilizer.

Several museums sort of miss this point. To me, it’s an obvious one but often hard to execute. Stepping Stones nailed it.

The rainforest area was cool. Heck, they even went for the realism of scat: 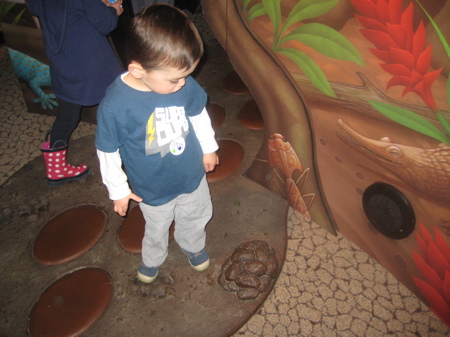 And who knows, maybe you’ll get to check it out no matter where you live: Created by Stepping Stones Museum for Children in conjunction with the Rainforest Alliance, The Nature Conservancy and Project Learning Tree. Rainforest Adventure begins a national tour in May 2011. 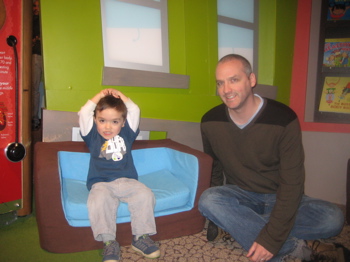 And check this out – perhaps we WILL return this summer (2011) to see this exhibit: access/ABILITY is a highly engaging and interactive exhibit promoting disability awareness. It celebrates the different capabilities in all of us, dispelling myths and encouraging open questioning and curiosity. [Note: We did return! And it was good.]

As a special needs parent, this is just excellent. I love stuff where Damian can be Damian and I don’t care a whit. “Hey people, this is Damian! Who wants to learn about Smith-Magenis Syndrome!”

(Just in case you do right now.)

After the rain forest area, we moved over to Healthyville. Healthyville rules. Not overly preachy, not overly technical, but certainly not dumbed down or useless, it was (again) spot on. 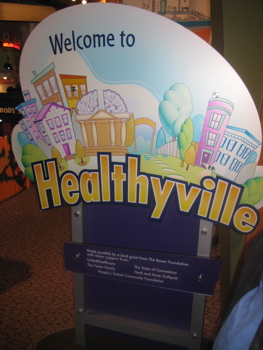 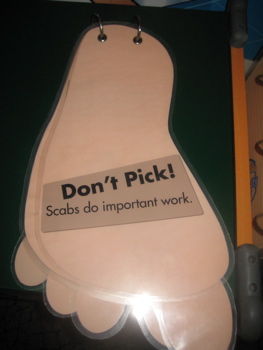 Healthyville is over 50 hands-on activities—nearly a dozen computer games, six main attractions, a real TV studio and countless opportunities to help children learn more about their bodies and their health. 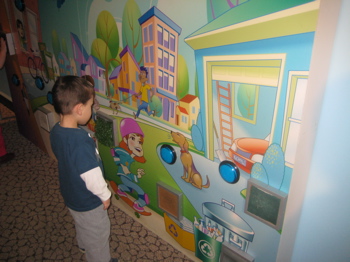 We loved Healthyville. It was more expansive than any other similar exhibit we’ve seen around the state and not as technically imposing as the one at the CT Science Center. And it had a nice amount of “gross”stuff for little boys to devour (scabs!) as well as more “acceptable” fair like why flossing is a good thing.

Stepping Stones also had a nice and large green screen video area. Certainly not the first one we’ve encountered, but probably the largest and – get this! – it was in good working order. Damian LOVES stuff like this where he can react and see himself on a video screen. He even did his little dance for everyone to see, but I have somehow lost that wonderful video of the event. Instead, you get this weird floating head picture and nothing more. 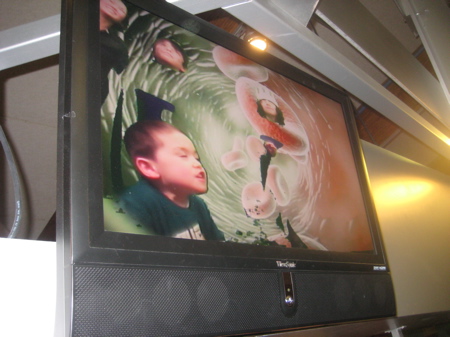 (Kids could wear green felt smocks to “hide” everything but their heads, so they could float with the platelets through the blood vessels.) I especially enjoy Hoang’s stretched out face in the upper left. 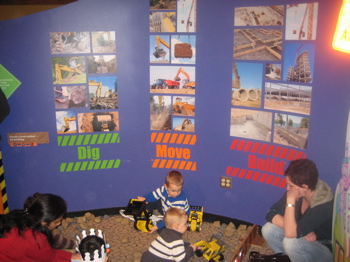 From there, it was over to the exhibit called “Build It!” Build It! allows children to explore architectural design and construction—from the ground up!. At this point, Damian was slowing downa bit and wasn’t really too keen on a bunch of the activities so we sort of rushed through the area. But the other kids all appeared to be having a grand old time building stuff and learning about the different properties of various materials. I think I spent a good 7 minutes here by myself, as Hoang was off with Damian at the bathroom.

They were in the bathroom in order to wash Damian’s hands to prepare for the birthday cupcake. Unfortunately, the line was too long for a kid like mine to wait patiently, so we never made it anywhere near the cupcakes. Instead, Damian felt the need to play in the water area a little while longer, which we did, just before leaving. 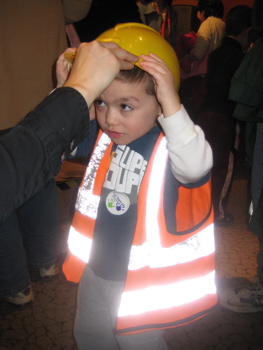 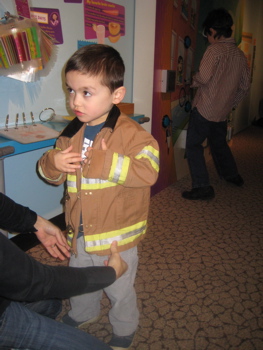 As I’ve mentioned, Steppping Stones has more to offer now than when we visited. There’s a science lab, a light lab and a multimedia gallery. Damian would love the latter two areas, that’s for sure.

I may go on record saying Stepping Stones is the best children’s museum when all is said and done – especially with their recent improvements and expansion. Plus, I imagine it’s even more fun when it’s not free and therefore is less crowded. 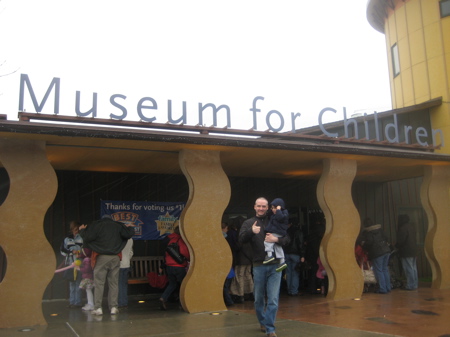 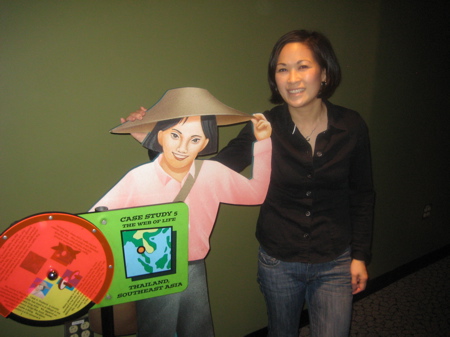