There we were, driving up Route 44 out to the Quiet Corner and the Pomfret Audubon Society. We also made a side trip down to Sharpe Hill Vineyard (Old visit here) to begin our 2009 Wine Tour – hitting 14 vineyards and getting our passport stamped to win a 2 week trip to Spain. As I sped through Coventry, we passed a blue Wine Tour sign that I knew wasn’t there on any of my numerous previous trips through here. “Uah!” I said as the sign blurred by. “A winery in Coventry?! That’s new.” 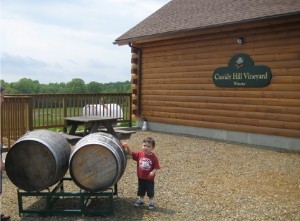 Indeed it is… 2009 was the first year Cassidy Hill became part of the Passport Program. This was later confirmed at Sharpe Hill upon receiving our 2009 Passports and seeing the new vineyard listed. A visit was planned a week henceforth… Which was now. To the vineyard!

The road to the vineyard is a dead end street through rural suburbia, if such a thing exists. Once at the end of the road, we found ourselves at the top of a modest hill overlooking a little valley and some hills beyond. As with most Connecticut wineries, there’s a huge house off in the distance, a barn, and a tasting area. Cassidy Hill’s tasting room is very new, very rustic, very clean and quite large. 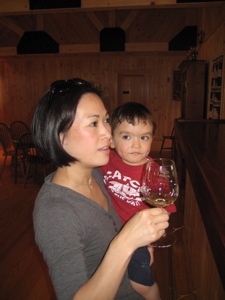 From the CT Department of Agriculture site:

The winery is a magnificent log structure which reflects the skill of Connecticut builders and complements Coventry’s rural character. The vineyard, formally a dairy farm, sits atop Cassidy Hill and provides beautiful views of the countryside.

After being attacked by a friendly black lab, we all went inside the wooden structure, still smelling of fresh cut pine. We ordered up our tasting and sidled up to the comically high bar. Something went awry with the building plans, because poor 5’3″ Hoang could barely peer over the structure. But the Cassidy Hill folks aren’t carpenters, they’re wine makers. [December 2012: This has been rectified.] 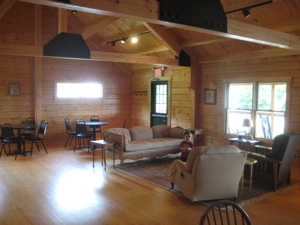 We enjoyed six wines for five bucks and the cool guy working there perhaps gave us an extra splash here and there. He was very friendly and knowledgeable about the wines and really seemed to enjoy his job. Another plus: He was totally honest about things like how he, like us, hates oaked chardonnays and was proud to have us enjoy Cassidy Hill’s non-oaked chard.

It was quite good. In fact, it hardly tasted like a chardonnay at all, as it was crisp and light and citrusy. They could lie to know-nothings like us and market this wine as a blend of chard and sauvignon blanc I think. The surprises continued. 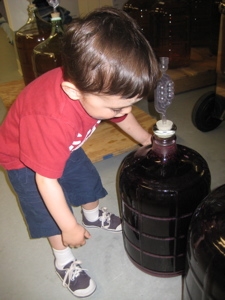 All of our state’s wineries produce a wine from Seyval Blanc grapes, as they seem to grow the best in our climate. Cassidy Hill has two blends called “Summer Breeze” and “Breezy Hill.” Summer Breeze has a sweet aroma of strawberries but here’s the key: It doesn’t overwhelm the palate with sickly sweet fruit flavor. It’s light and crisp and the strawberry flavor is NOT overpowering. I actually mildly enjoyed it – the very rare fruity wine I’ve sort of liked.

Breezy hill is a light summer wine with grapefruit notes. I love grapefruit notes in wine – like a lot of the New Zealand whites. At that point, we were given the “classic chardonnay” which IS aged in oak barrels, but again, these guys do it right. Sure it was buttery and had oak hints, but it wasn’t like drinking a tree. Again, this may be the first oaked chard we both didn’t hate. 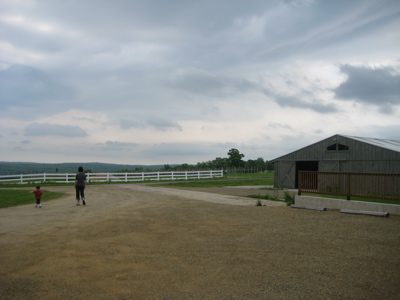 I really like this picture. (From the Cassidy Hill parking lot.)

While Damian explored the joint eating the complimentary pretzels, we moved on to the reds. Only two are made here (thus far) and both are pretty good. The “Grandview” is made from Chambourcin grapes and is a bold, bold wine. Very big, very rich – and very good. According to our guide, it was still a little young and could stand another year to bottle age, but it was fine for our novice palates.

Lastly, we downed their Cabernet Sauvignon which was again pretty good – and very classic. It did win a medal at the Big E last year, so wine people rather like it as well. We purchased a bottle of the Breezy Hill, not only because it was good, but also because we were in a good mood due to Damian being good and our host being so personable. 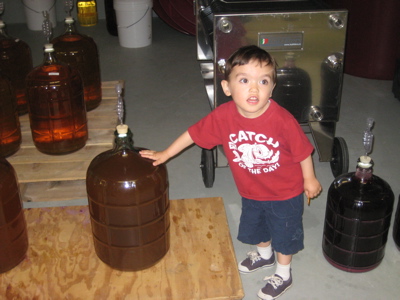 On our way out to the car, we were invited to check out the actual wine production area by a guy who a) noticed me taking pictures and b) wanted to procrastinate rather than working the vines. We gladly accepted the invitation and were led to the ground level wine making area.

It was pristine. Everything looked brand new and Hoang really seemed to enjoy learning about the process. She harbors fantasies of owning a vineyard someday (at her summer home, I suppose, since she harbors stronger fantasies of living in a big city. But then there’s the dream of living in Provence… So I guess if we live in Nice – or Barcelona will do I suppose – all this could come true. Benefactors welcome.) 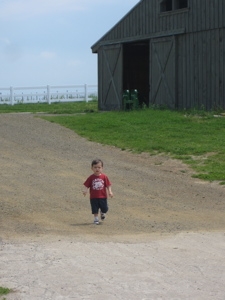 Cassidy Hill is definitely a small operation. We were told that upon early retirement from a local insurance giant, the owner’s wife asked if they could buy a house with a view. (Check.) Then they started making wine for themselves and friends and now a few years down the road, they are a player in the Connecticut winery game, such as it is.

Hoang remarked that she liked every single wine here, which is rare no matter how storied or acclaimed a winery is. Damian had a great time as well, which always make the day so much better. 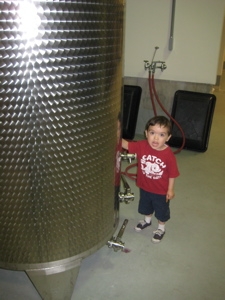