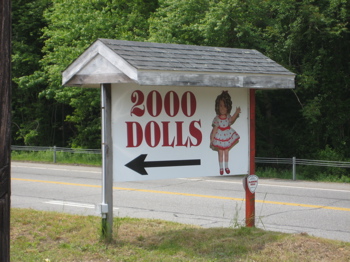 These are the museum visits I love. My journey to get inside this place was a multi-year, nearly quit-upon saga. Folks, you know I’m here for you. You know I fight the good museum fight and will constantly and consistently do my darnedest to provide the world the most comprehensive reports of every museum and museum-like entity in the great state of Connecticut. It’s what I do.

And if my 169th museum, located in a tiny dilapidated little strip of mostly empty storefronts down in good ol’ Preston doesn’t prove that to you, then I don’t know what will. 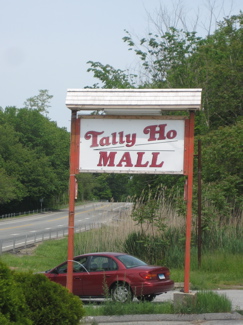 I forget when I first became aware of this place. I know it was while driving past once, down Route 2 on my way somewhere beyond Preston – I think it may date all the way back to one of my very first all day jaunts with EdHill. I do remember driving by the Tally-Ho Mall once – and as you can see from the pictures, the word “mall” is quite the stretch – and noticing the doll shop’s existence with the descriptor, “& Museum.” For me, finding gems like this while on the road is the equivalent of a hole-in-one for golfers. Alas, it wasn’t open that day but of course I made a note of it. 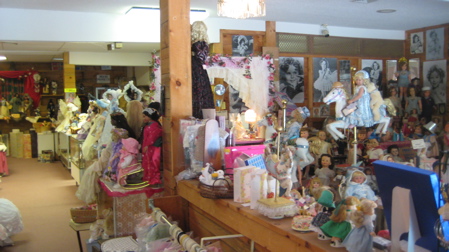 Perhaps a half a year later, I found myself on Route 2 heading through Preston again with the plan to stop in. Now, I recall being a bit hesitant since, y’know, this is a doll shop and I’m not exactly a typical doll shop customer. Throw in my need to snap pictures and a solo visit would have been a bit awkward to say the least. (Recall with me, if you will, a previous doll museum visit with EdHill up in Coventry.) But… the shop was closed. 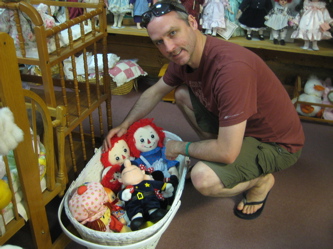 The next year, 2008, on my way somewhere with Hoang (I think the Foxwoods casino for an anniversary overnight), we drove by yet again only to find it closed. Another time I had called ahead and after 15 rings, a woman picked up and sounded very put-out about the potentiality of being open during what I had learned are the shop’s opening hours. For whatever reason, I never made it to the shop/museum that day and probably really bummed her out. 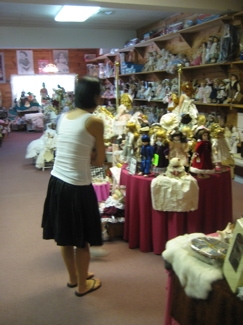 Then the stars aligned. Everything was a go for the much-anticipated trip to the Young at Heart Doll Shop and Museum. It would definitely be open. It was a Saturday between May and December. We’d be there between 10 and 4. I would have Hoang and Damian with me as distractions/reasons to be there. I was, in a word, excited. 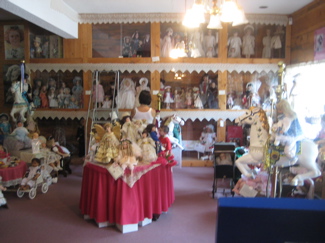 Over the years, Young at Heart has been a survivor. I can’t really recall any other stores in the “mall” in all my drive-by’s, but I’m sure there have been a few. I have no idea how much business this place does, nor if they even really need to do much as the elderly folks in the shop during our visit were of retirement age and I want to believe that this is merely a labor of love for them (as all the best museums in the state are). The whole operation appears to merely be one woman’s vast collection of over 2000 dolls. Oh sure, there are a few doll-related items like carriages and bassinets for dolls, but in the end, it’s just dolls. Two-freaking-thousand of ‘em.

That’s a lot of dolls. 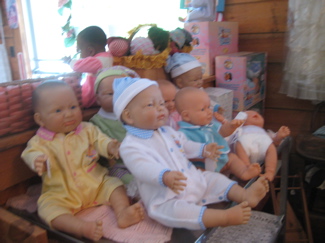 And since I know nothing about dolls, other than they are of course an evil race of oppressed minions hellbent on overtaking human society and becoming our slave-driving dead-eyed overlords, that is. But you knew that already, as I’ve had run-ins with their kind before; just check the creepy dolls tag on CTMQ.

Oh you better believe I kept close watch on Damian as he blithely walked among the enemy at the Young at Heart shop/museum. You just never know. 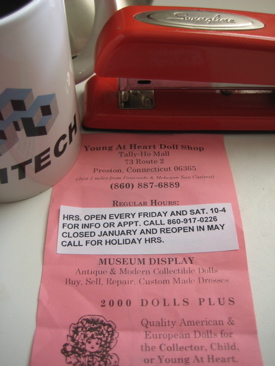 Okay, so why am I insisting that this place is a museum? First, the sign in the window says “Museum.” That’s the only way this place ever landed on my list. And even so, check out their pink brochure (available only at Young at Heart as best I can tell) – here, clearly, it says, “MUSEUM DISPLAY – Antique & Modern Collectible Dolls.” And brother, you better believe that that qualifies in my book. Even disregarding all that, this place has over 2000 dolls! 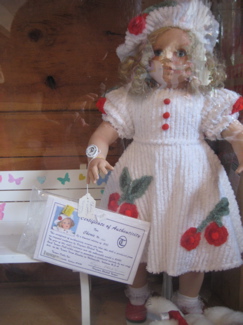 Don’t even argue with me. Or I’ll begin to suspect you’re in cahoots with them… The dolls.

The shop/museum is quite large for what it is. It’s also very well organized and while it certainly has that “old stuff” smell, it’s clean and easy to navigate. I’m also sure that the displays are set in such a way as to make sense to doll people, but I wouldn’t know. 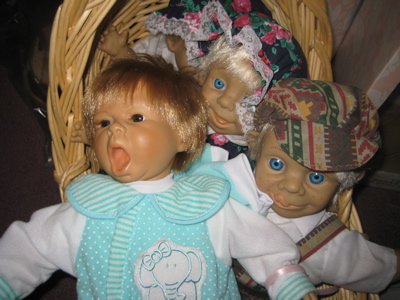 As I’ve mentioned from time to time, I’m not a collector of anything. I don’t understand collecting old things and the market for such things, not to mention all the high-quality forgeries and nonsense these days, is just odd to me. Be it baseball cards, autographs, Star Wars stuff or dolls… It’s all the same to me. Like, remember when all those 40-something cat ladies you know went on a Beanie Baby binge? And how they paid 100 bucks for some dumb 5 dollar bear? And how they convinced themselves that it would be worth 500 bucks by now? Where are they now?

Or how my sister insisted on having every variation of Cabbage Patch Kid when she was young? (Note: She got them all too, being the favorite child and all.) A boy, a girl, a preemie and yes, even a Koosa. Not to mention fifty of the little mini ones. Anyway, Karin – this is for you: 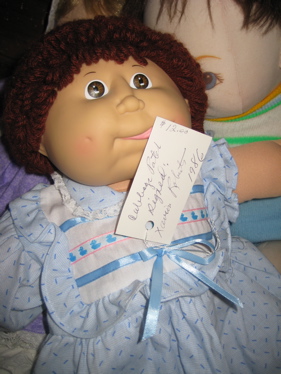 Can’t read it? It is a “signed” Cabbage Patch Kid from 1986 (signed by Xavier Roberts, the genius who invented these things) for… drumroll please… TWELVE DOLLARS. That’s hilarious to me.

Anyway, Young at Heart does have a ton of much older and better made and historically important dolls. They specialize in Shirley Temple dolls and that’s what they trumpet the most. She’s on the big sign out by the road. Even more impressive, someone pencil drew an incredible sketch of her on the window sign. It’s a bit tough to see, but I love the effort: 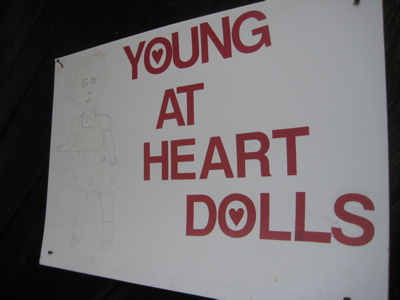 She’s even wearing the polka-dot dress associated with her on both signs. Many Temple-inspired products were manufactured and released during the 1930s. Ideal Toy and Novelty Company in New York City negotiated a license for dolls with the company’s first doll wearing the polka-dot dress from the movie, Stand Up and Cheer!. Shirley Temple dolls realized $45 million in sales before 1941, which to me, is just plum crazy money for that time. 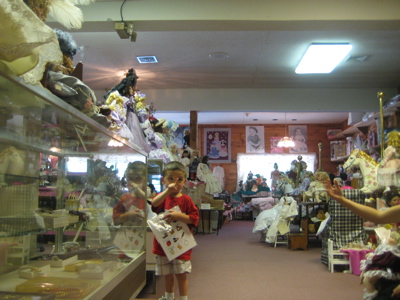 Damian tells Hoang to wait one minute… He had to be sure that her arm to the right was hers and not a disembodied doll arm come to life for the purposes of scooping out his brain.

She was an incredibly cute and (I’ll assume) talented kid. Hey, did you know she’s still alive? You did? I didn’t… But did you know she was the US ambassador to Czechoslovakia in the early 1990’s? No you didn’t. Unfortunately, I didn’t even notice that I was supposed to be seeking out the Shirley Temple stuff at the museum, for I never even got a picture of a Shirley Temple doll! You can see her headshots in the background in a few of my pictures, but nothing more. For shame. 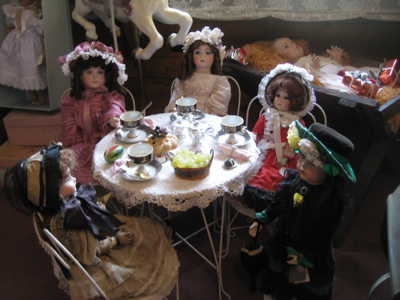 Just an innocent afternoon tea scene? Or an evil seance to raise the dead (behind, in the manger)

I hardly got any good pictures at all, for like I said, I felt weird and didn’t want to use the flash at all. The less questions the better from doll people is what I always say. Let alone the chance that the flash would wake them from their catatonic state and begin the first phase of their attack. I didn’t want to take any chances. 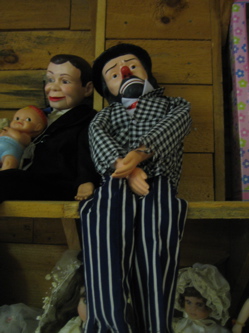 Since this place isn’t your typical museum, I wasn’t afforded the chance to learn about the dolls. So I’ll relay what I can gather from the pink brochure: They have quality Amerian and European dolls for the collector, child or young at heart. (Awww.) They have an extensive selection of quality porcelain creations. (Creations? And you want to argue with me about the doll plot when they use words like “creations?”) They claim to be eastern Connecticut’s largest selection, which makes me very curious as to what looms out in western Connecticut. I’ve not heard of any doll collection west of Coventry, which is not west at all. And I know of the Lyman Museum’s doll collection down in New London as well, but again, nothing out west. My work is never done. 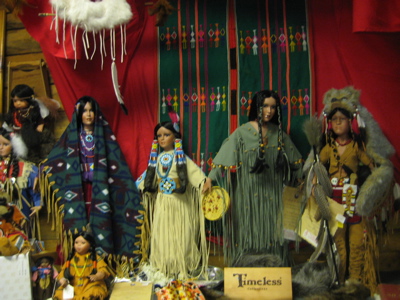 Like these guys don’t have a reason to come back to life and kill us all.

I cannot WAIT to see what Google searches land on this page! Doll collectors who’ll get mad at me and creepy people interested in the impending Doll Uprising.

As you can tell, not only have I had fun writing this page, but we had fun visiting Young at Heart. Really, we did. The collection is impressive to say the least and the woman who kept an eye on us (most likely to be sure Damian didn’t mess anything up) was a doll herself and quite endearing. 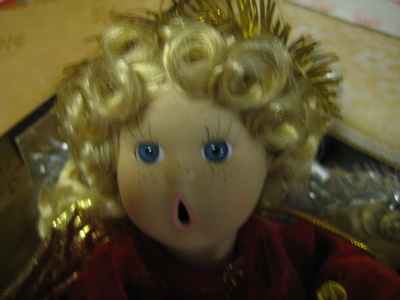 Sometimes I wish I could take this blog in more adult directions. 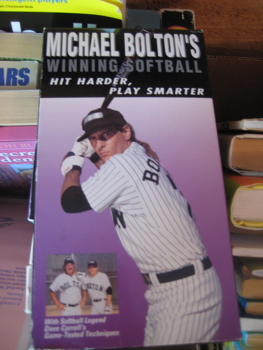 Oh yeah. This was for sale there too. Sorry, I’m suffering from ridiculous overload.

So next time you’re driving down Route 2 (Not 2A like smart people on their way to the casinos) and you pass the crummy old Tally Ho Mall, stop in and say hello. Unless you’re too afraid… Mwuh huh huh huhhhhhhhhh….

Or if they’re closed. 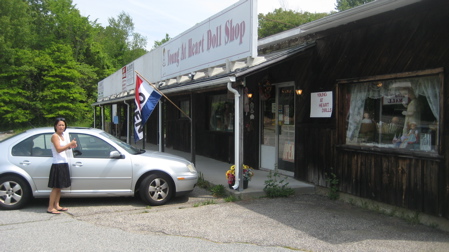