There were four galleries that make up the Arts Council of Greater New Haven Galleries back when I started this website. They were the Sumner McKnight Crosby Jr. Gallery, Gallery 195, The Parachute Factory, and Haskins Laboratories Gallery. As is often the case with these small, fleeting places, I’m pretty sure they’ve all disappeared or moved or changed names or something. I only had the chance to get to one of them, and I’ve no idea why you’re interested in it, but here you are.

I’m going to be brutally honest with you right off the bat: I don’t really have much of a recollection about my quick visit to the Sumner McKnight Crosby Jr. Gallery and I have no information on any of the artists featured. I went in the morning of my 2010 full-on CTMQ day around central Connecticut. At the time, I wasn’t really clear on how the various art galleries around New Haven would fit into my site or really, how the various art galleries around New Haven viewed themselves. 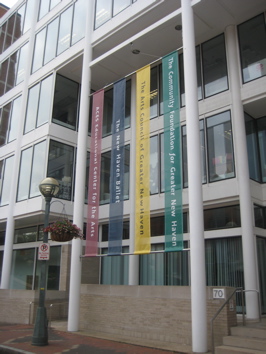 In case you were wondering, the Sumner McKnight Crosby Jr. Gallery features regional artists in group and thematic shows. You may have noticed that the visiting hours mirror business hours. That’s because this “gallery” is actually, very literally, IN the offices of the Arts Council. I had no idea that this was the case when I bumbled up into it and was suddenly in the middle of a bunch of women in cubicles. 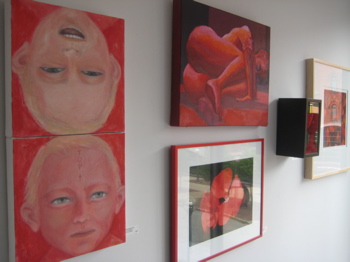 Someone asked me what I was doing and I responded, cool as could be, “I’m here to check out the art gallery.” Instead of derision, I was warmly welcomed and shown where the exhibit’s pieces could be found. “There are some here at Jenny’s desk, a few more back by Sandy, and don’t mind the meeting going on in that room, just go in as there are a few pieces in there.” Or something like that.

It was weird. Especially when you consider that I took all the pictures you see here. All on the down low. Yeah, I’ve become pretty slick with the secretive camera work. I visited during an exhibition called Red Alert. 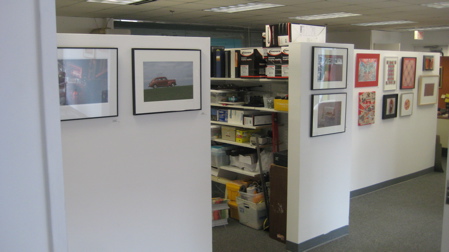 Cubicle walls with people at work

That exhibition of works showed a variety of media and in a departure from previous members shows, the Arts Council introduced a theme, Red Alert, that was to be interpreted by participating member artists on multiple levels.

As the exhibition said, “the color red can evoke power, danger, luck, love, and countless other associations. ‘Red Alert’ can represent a warning or signal and can be interpreted literally or metaphorically.”

Ah, artist-talk. You just gotta love it. But I guess they have a point and as you can see from my pictures, the artists certainly varied in their interpretations of whatever Red Alert means. The first thing I think of is, of course, Kool DJ Red Alert – one of the most important dj’s of all time.

Alas, I didn’t see any images of the legend on display in New Haven. For shame. There were some pretty cool things on the walls though – things that interested me for sure. Though again, I was walking among people at work! This gallery visit was definitely not in my comfort zone.

You could say I was on, um, red alert. 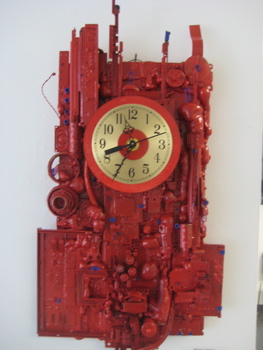 Wishing to know more about this Sumner McKnight Crosby, Jr. person, I poked around the Intertubes and found at that there’s a retirement age race car driver named Sumner McKnight with a win percentage of about 2 percent.

But then I found a whole bunch of stuff on a Sumner McKnight Crosby with art and New Haven (Yale) ties. But was this the gallery’s namesake or did he have a son (Jr.) who funded this place? I do not know, but the stuff about the non-Jr. guy is pretty fascinating.

Medievalist architectural historian; principle scholar of St-Denis and chair of the Department of Art History, Yale University, 1947-1953. Crosby attended Phillips Academy, Andover, Massachusetts before entering Yale University. At Yale the lectures of Marcel Aubert and Henri Focillon persuaded him to study art history. As a graduate student, he became fascinated with the abbey church of Saint-Denis, both as a school of manuscript illumination and as the birthplace of the gothic art form. It was a subject which would occupy his research energies the rest of his life. His studies included time at the Ecole des Chartres. He married Sarah Rathbone Townsend, in 1935. His Ph. D.1937 thesis from Yale, written under Focillon, reviewed the twelfth-century church and investigated the early plans of the crypt and stylistic differences of the capitals… 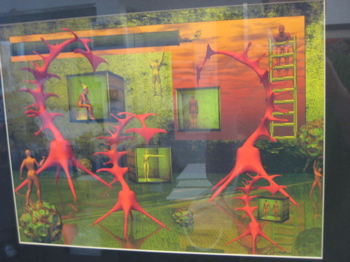 Ok, that was really boring. But we’re in deep now so might as well keep going. It ends with a bang.

Crosby focused essentially on only one monument in art history, the abbey church of St. Denis, where gothic architecture was born.

In Crosby’s view, the inception of the Gothic style at Saint-Denis stemmed from the governing principle of unity which brought about a new synthesis. That unifying concept, informing and integrating the architecture, sculpture, stained glass, mosaics and designs for precious objects, resulted in absolute clarity of form and expression. Three articles written in 1963, 1965, and 1966 explored the influences that converged at Saint-Denis under Suger’s patronage and gave birth to the new style.

Crosby doubted Suger was the single creative intelligence behind Saint-Denis, as conventional wisdom maintained. Crosby posited the existence of skilled masons as designators of the sophisticated designs of the church. Crosby’s narrow focus as an art historian was criticized by others in the discipline. 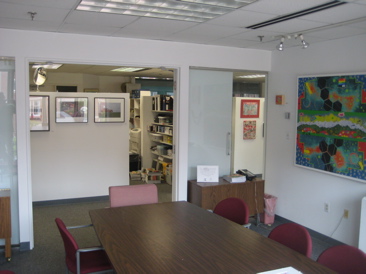