I’ve come to love Stonington. I really like its sea-faring (and therefore, seafood) roots. It’s not all snobby like some of the shore towns to the west, but it certainly could be, because it’s just as pretty as any other town along the Sound in Connecticut. 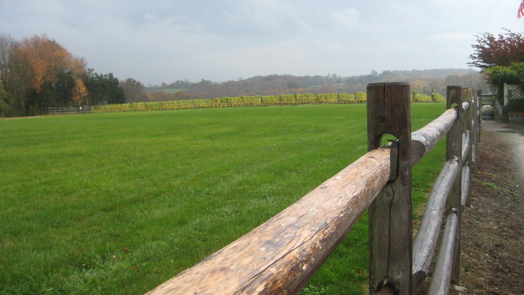 Visiting a classic New England town on one of these dreary autumn days has always held a romance with me for some reason. Hoang hates them – “Everything’s decaying and dying and signaling the long, cold winter,” she says. While that may be true, I find a peacefulness in them and the way the fall colors pop against the gray skies has always been really cool for me. 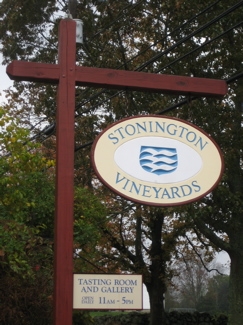 Regardless, we both agree it’s an ideal type of day for a long road trip out to the farthest southeastern reaches of the state. And with only a few winery visits to go before completing our 14 required for the Passport program in 2009, we happily hit the road.

Our visit to BF Clyde’s was great, but it wasn’t going to help us win a trip to Spain. (CTMQ Notes: We didn’t end up winning the trip to Spain. Again.) So we drove over to the vineyard and were immediately struck by the long white crushed pebble driveway across a sweeping hill covered in grape vines. Beautiful. 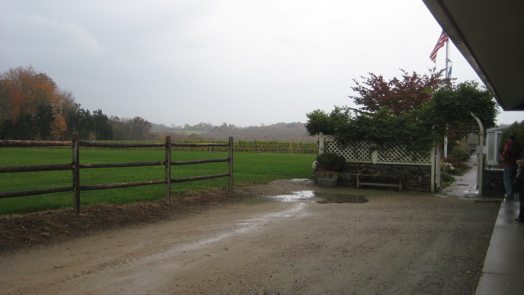 At this point, it’s only fair to mention how good the Stonington Vineyards website is. Certainly one of the best of the wineries in the state. It sure makes my “job” easier here… And it’s also the reason this page will be longer than other winery pages… Stonington offers up two bits of learnin’ that I never knew before, as you’ll read.

We entered to a mostly empty, but very large and open, tasting room and got down to business while Damian ran around like a nut. I forget how much we paid, but I do recall this being (I think) the most expensive tasting in the state. Hoang and I shared one tasting (I think it was 10 bucks) like we sometimes do, simply because one of us has to tend to Damian while the other tastes. It works and we’re pretty adept at the process by now. 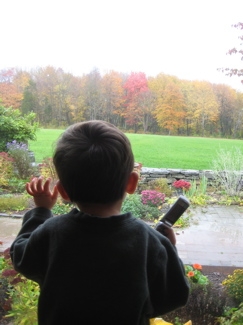 I’m sure I don’t have to tell you, much of what follows is from their website…

Stonington Vineyards is one of the older wineries in Connecticut. The vineyards are situated on south-sloping, well-drained glacial soils. The proximity to the Atlantic Ocean provides a maritime microclimate not unlike the Bordeaux with a long and relatively cool growing season; perfect for growing Chardonnay and Cabernet Franc.

Stonington Vineyards was established by Nick and Happy Smith in 1987, when purchasing 58 acres in the Stonington Uplands on which wine grapes had been planted earlier in the decade. The winery was constructed in 1988/89 incorporating the latest in winemaking technology and the traditional methods of barrel fermentation. From the start, Mike McAndrew has been the Winemaker, garnering the reputation for producing quality, European-style table wines that have won numerous awards over the years. They produce about 5,500 cases of wine annually, the vast majority of which are sold from the winery; the balance to high-end restaurants and fine wine shops throughout Connecticut. 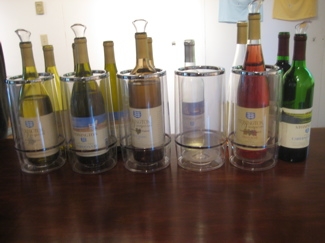 Stonington is best known for its barrel fermented Chardonnays and its proprietary blends Seaport White and Triad Rose. They also produce, as varietals, Vidal Blanc, Reisling and Cabernet Franc. At harvest, all of Stonington’s vineyards are hand-picked to optimize quality. Stonington has approximately 6 ½ acres of Chardonnay and 3 ½ acres of Cabernet Franc.

Apparently this area along the coast is very special for wine growing… Something called the Southeastern New England Appellation. I had no idea… 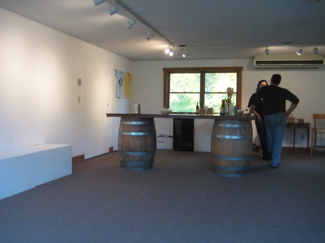 In 1985, the Bureau of Alcohol, Tobacco, and Firearms (BATF), the federal agency responsible for regulating wineries, approved an application to establish the first viticultural district in the Eastern United States. Each appellation must demonstrate commonly basic soil and climatic characteristics for the area, (defined as “terrior” or “microclimate”).

The Southern New England appellation starts in the west, from East Haven, Connecticut and comprises a narrow band of shoreline east to the Connecticut – Rhode Island border; continuing eastward to include all of the Rhode Island coastline; the southeast coast of Massachusetts, including Cape Cod and the islands of Martha’s Vineyard and Nantucket. This area has similar soils ) loam over glacial alluviums/till), growing days, annual rainfall and stable seasonal temperature gradients that are strongly influenced by the ocean waters.

Winter temperatures, at Stonington, are much milder than those found just miles inland, and conversely, summer temperatures are lower – averaging 76 degrees. This results in a long, cool, consistent growing season.

Hm. Interesting. There is a Southern New England Coastal wine trail with a passport program too – but it only has RI and MA wineries on the list. (See here)

The vineyard’s website also gives a primer on how to taste wine. It’s never too late to learn about something we’ve been doing for years. The instructions, of course, contain some silliness like this:

Swirl the wine in your glass by rotating your wrist. This takes a little practice. Most people have trouble at first because they are moving their entire arm to swirl the glass. The key is in the wrist. Rotate the wrist while holding the rest of the arm still. The swirling of the glass releases the wine’s aromas to the top edge of the glass.

I’ll bet I can swirl the dang glass with some arm action and be just fine.

While we were tasting, Damian found a local real estate circular and picked out a small summer cottage for us to purchase: 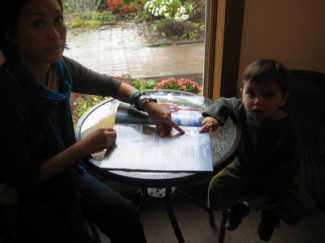 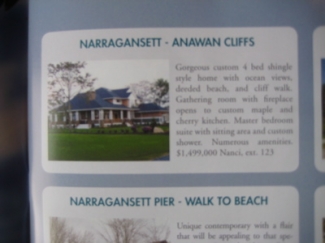 Consider it done, son, consider it done. On to the wines! The vineyard’s website has a rather in-depth explanation of their particular wine-making process. It all sounds rather impressive and important, what with words like “Tonnelleries” and “malo-lactic” and “sur-lee.”

As per usual, we started with the whites and worked our way up to their one red. As you’ll see, we didn’t get to taste too many wines for our money. But they were all good, even the oaked Chard – something we both usually do not like. Here, though the chardonnay is aged in oak barrels, it wasn’t too oaky.

2008 Vidal Blanc: Fermented in Stainless tanks & aged in neutral oak barrels for 8 months. This fully dry wine, with its crisp citrus finish is sure to complement fish & seafood cuisine. I ended up buying a bottle of this as it was delicious. Definitely a lemon undertone to this, which I thought was unique enough to have at home.

2006 Sheer Chardonnay: Sheer = pure or complete, best describes our new ‘barrel-free’ style of Chardonnay in which we’ve allowed the unmasked flavor of this noble grape to stand alone, bringing forth an uncommon wine with subtle flavors of ripe apple, mineral and yeast. We both liked this one. 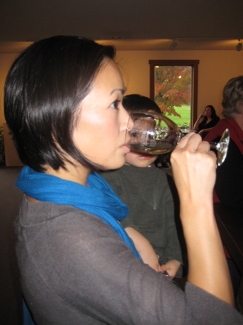 2008 Chardonnay: Classically barrel-fermented and aged in oak cooperage for up to one year. The wine shows a crisp clean-appley character with a subtle vanilla nose. This is an award-winning wine.

2007 Cabernet Franc: Abundant forward aromas of dark berries and currants with hints of tobacco and leather, a backbone of soft tannins and a clean lingering finish.

I’ll never stop finding it funny when vinters think “tobacco and leather” sound appetizing. Anyway, that was it! We braved the rain outside and drove a short way up to the nearby Jonathan Edwards Winery.