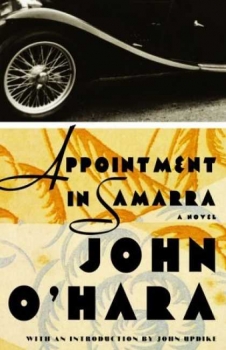 After suffering through the worst book I’ve ever read (To the Lighthouse), I was determined to immediately pick up another, vastly different and hopefully much better book with which to purge my brain of anything Virginia Woolfy. I was also under the gun (as it were) to get in at least one more Modern Library Top 100 book this year and the calendar had ticked into December.

Ahhhh, John O’Hara to the rescue. Added bonus: Introduction by John Updike! Alright, a couple of real men writing about a real man story with some real boozing, some gangsters and some infidelitiy! Let’s get crackin’.

The title of the book comes from a tale attributed to Somerset Maugham (reprinted on the first page of my edition.) In the paragraph, the servant of a merchant in Baghdad sees Death in the marketplace, is sure she’s coming for him, and asks permission to go hide from her in the town of Samarra. The merchant agrees, but then goes to the marketplace himself to have some words with Death about how she treated his servant. Death denies having threatened the man, “I was astonished to see him in Baghdad, for I have an appointment with him tonight in Samarra.”

Read that last paragraph again. It’ll mess with your head for a moment. Then think about what it means for the next 250 pages – it means that you know someone’s gonna die. Despite the book’s sprawling character base, it centers around one self-destructive man, a Mr. Julian English. So it becomes apparently pretty quickly that Julian will die before the book’s end. However, it’s the how of his demise that is left a mystery.

Now, I’ve read several reviews of the book and every one mentions Julian’s death. Still, I feel like it sort of gives away the ending even though the title/blurb alludes to it up front. Anyway, O’Hara is among the second tier of great American writers. He was most prolific with short stories and magazine articles, but his books were best sellers and caused a sensation. Some have called him “the real Fitzgerald” and no lesser writer than Hemingway praised him with, ““If you want to read a book by a man who knows exactly what he is writing about and has written it marvelously well, read Appointment in Samarra.”

I only included that quote for the use of hobbledehoy. (It means an awkward adolescent boy and I shall like to revive its usage.) Appointment is most definitely a period book; full of early 30’s slang. But the book isn’t vulgar in the least; oh sure, there are some thinly veiled sexual encounters, but nothing is overt at all. In fact, O’Hara uses a literary technique wherein he never really describes the “big” events in the story. Not the actual action of Julian throwing a highball in Harry Reid’s face (from which he receives a nasty black eye) and not Julian’s adulterous dalliance with the local crime boss’ girl-on-the side (right in front of his wife). 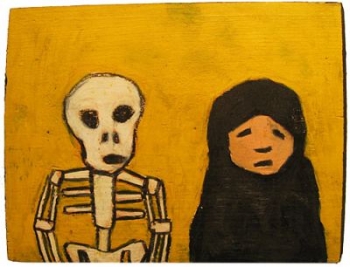 Samarra is about one man’s descent into despair. Julian goes crazy, for lack of a better term, over the course of two days. He submarines his business, alienates his friends, screws over his creditors and his liquor supplier and treats his wife like absolute garbage. Oh, and he manages to remain drunk for almost the entire duration of the story.

This is a fast 250 pages and crazy enough, it’s a fun read. On the surface, the story of Julian’s downfall is purely entertaining. However, in the context of the Depression-era, it’s interesting to contrast it to some of the more popular Jazz Age tales of Fitzgerald and others. Julian is the son of class and privilege; wealth was simply “always there” for him and with the economy tanking, his world began to fall apart.

New influences began to dominate the wealthy class in the early 30’s. Notably, poor people working hard and winding up poor themselves. Is this what led Julian into his outbursts? Certainly his wife Caroline didn’t deserve anything he did to her. Was it her standing up for herself finally that did it – after all, her own mother was clear about how Caroline should just be quiet and deal with her husband’s cheating and drinking and violent ways. Yes, the world was changing back then and the protected WASP ruling class was showing some cracks.

The last lines of the story allude to the fact that Julian’s one true friend, Lute Fleigler, would take over the lucrative business now that Julian was gone. Lute… who treated his wife as an equal and who got to where he was through hard work and respect. Indeed, the world was changing… And that was a good thing.