If you’re really into National Historic Landmarks of Connecticut and you’re going through all 60+ one-by-one, settle in; for this is merely the first of 9 in New Haven. To put that in perspective, New Haven represents but 0.6% of Connecticut’s 169 towns. And yet, a full 15% of our National Historic Landmarks are in New Haven! (Statistics: The only field of math where you can show whatever you want to show!) 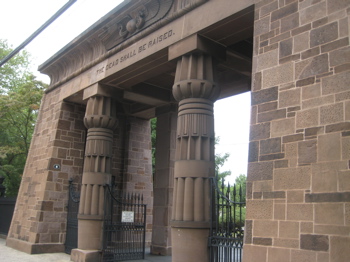 Why is that? Yale helps, as 6 of them are either Yale buildings, on the Yale campus or tangentially related to Yale somehow. And Yale is old. And Yale has had many, many important and influential graduates over its long history. I guess that’s the only answer then. But while the Grove Street Cemetery abuts some of Yale’s campus, it’s not one of the six I’m attributing to the school. But it’s certainly one of the most interesting of the New Haven Nine.

First off, the cemetery warrants two other CTMQ pages; one for its placement on the CT Freedom Trail and another for its tour and for being the first chartered burial ground in the United States. Impressive to say the least. 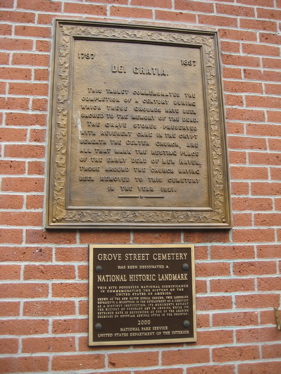 For the purposes of this page, I merely parked illegally on Grove Street and snapped a few shots of the entry gate and chapel house. I do plan on doing the full-scale tour someday, don’t you worry.

For now, I’ll just grab some blurbs from the Grove Street website and call it a Nationally Historic day.

While proceeding down Grove Street, the outside boundary of New Haven’s “original nine squares,” one encounters an open area in pleasant contrast with the commotion of a busy city and a large university: the Grove Street Cemetery, officially called the New Haven Burying Ground. Should one venture further down Grove Street he would find some view of the area possible through a wrought iron fence; further on, to the intersection of High Street, would place him in front of the massive Egyptian Revival Gates to the cemetery designed by Henry Austin.

Lured inside by the aura of tranquility sensed from without, the visitor finds immediately before him the Chapel designed according to the strictest tenets of Victorian decorum with its gilded butterfly which, to the Greeks, symbolized the flight of the soul. Behind the Chapel, and to either side, stretches the cemetery proper: its rigid grid of avenues and paths softened by well-groomed trees and shrubs, and named after such living things as Spruce, Sycamore, Myrtle and Ivy. The cemetery, established in 1796, is perhaps the oldest in the nation with this type of layout. 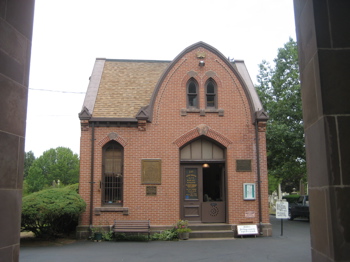 In 1997 the Department of the Interior added the Grove Street Cemetery to the National Register of Historic Places. Three years later the Department declared the cemetery a National Historic Landmark, the first cemetery so designated in New England, because “this site possesses national significance in commemorating the history of the United States of America.”

Specifically the cemetery “represents a mile-stone in the development of a cemetery as a distinct institution. Its monuments reflect the history of funerary art in America while its entrance gate is recognized as one of the leading examples of Egyptian Revival style in the country.”

Now I’m not sure how much Egyptian Revival style exists in the US, but it’s nice to know one of the best examples, even if it’s just a gate, is in New Haven.