Having been to 240 museums so far in Connecticut, it stands to reason that I’ve met some really interesting and talented people. I can add sculptor Denis Curtiss to that growing – but distinctive! – list. I can’t remember exactly when I became aware of his Sculpturedale outdoor studio, but I do recall excitedly Googling it and adding it to my list of museums. 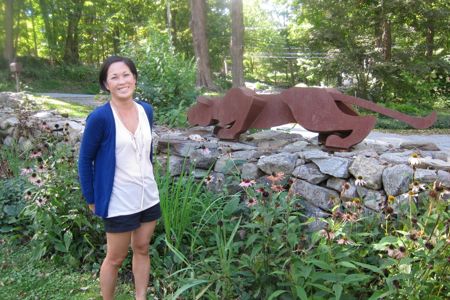 Every time I drove by his steel menagerie I would think to myself that I really need to stop by someday and give it the proper CTMQ treatment. Of course, I had no idea what that meant, but I figured I’d want Damian there. And then we had Calvin and so I waited another year for him to reach an age where he’d enjoy it too.

At least as much as 17-month-olds can enjoy large metal sculpture. And 478 month olds who hate squirrels as well: 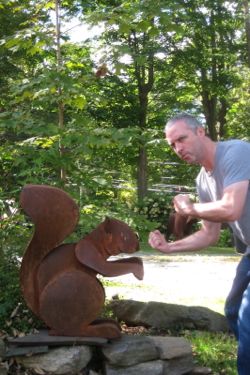 As you can see from my pictures, both of them had a grand ol’ time playfully exploring Denis’s well-maintained work – but I have a few important things to say before we go on…

Some words of wisdom before you decide to visit Sculpturedale:

While it’s sort of “always open,” this is the home of Denis and his wife. Respect that. I contacted them ahead of my visit and told them what time we’d arrive and that we’d have two little kids in tow. You should do this as well – and besides, it will allow for you to have a chat with Denis which I highly recommend. Do NOT visit if your kids are unruly, disrespectful and/or unable to follow directives like, “Come here,” “Stay here” and most importantly, “Don’t touch/climb on/push that.” 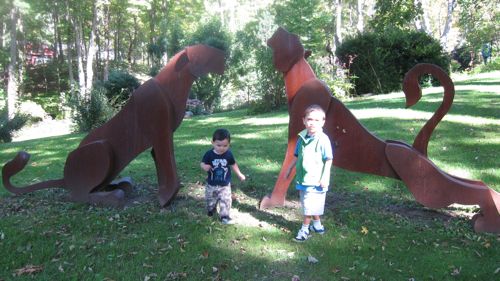 That last one is very important and while Denis is too kind and respectful to yell at negligent parents when their kids threaten to knock over a $10,000 steel giraffe, I have no problem doing so. You know who you are: Keep heading north on route 7 and let your dirtball kids jump in the water at Kent Falls if they feel the need to do something against the rules.

Now that that’s out of the way, we can get going with our visit. 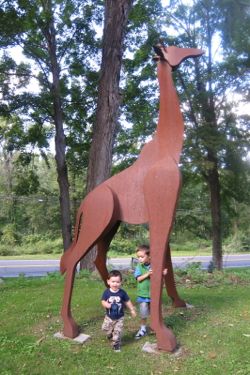 After a stop at the White Silo Winery down in Sherman, we had a nice lunch in Kent and then drove up Route 7 to Sculpturedale. Upon arrival, Denis greeted us (and probably quietly assessed the danger our kids posed.) I immediately took a liking to him as he was fun with the boys and very welcoming to his property.

I suppose some of you are wondering just what the heck Sculpturedale is. Sorry, I was taking you for granted. No, it’s not really a museum but it definitely is an outdoor sculpture gallery. All the works here were made by Denis himself in his studio which is on the grounds as well. 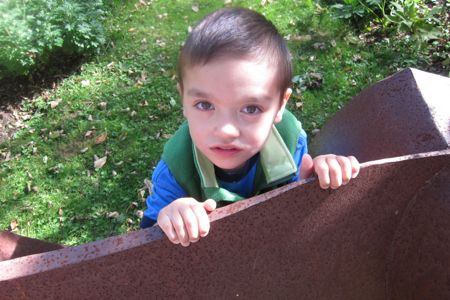 Denis is a renowned metal-worker who is retired from teaching art “around the world” according to his site. His pieces can be found everywhere from Andy Williams’ theater in Branson, Missouri to a city park in Lincoln, Nebraska. Each piece is made thusly:

Sheets of flat metal are cut, then welded into triangulated shapes that assemble to a unique cubist sculpture that is extremely strong. Never static, the animals are in a state of movement: horses prance or rear, goats leap, cats pounce, elephants trumpet, roosters stomp. They each have a personality and a name. 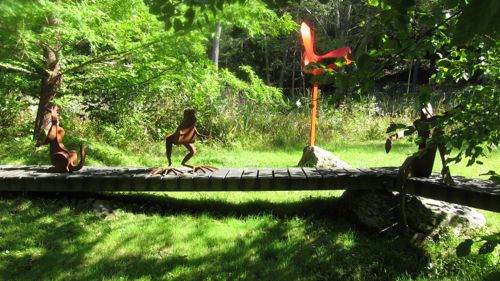 The Sculpturedale website says that walking around the property is like going on a safari. Indeed it is, especially with kids in tow. I’m always amazed at the developing human brain and how little kids Calvin’s age recognize dogs whether they are cartoon or real or St. Bernard or dachshund – or cubist metal work in Kent, Connecticut. It’s pretty crazy when you stop to think about it.

I really like Denis’s work. I like the fact that his steel animals are both rigid and fluid at the same time. His weld spots are seamless and clearly the work of a master. We stayed close to Damian and Calvin (before we heard anything about unruly children) and they enjoyed finding the more “hidden” sculptures.

At one point, Calvin found this doggie and while it looks like he’s giving a cute smiley wave, he was actually enjoying slapping his hand down on it. 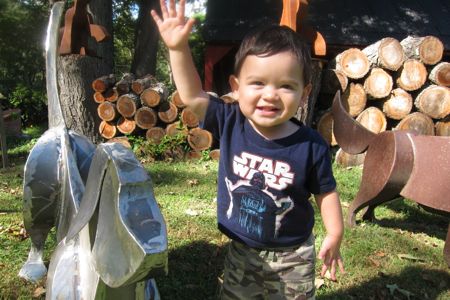 “You probably don’t want him doing that,” intoned Denis. “I just finished that piece this morning and the haven’t fully sanded down the edges.”

In other words, it could have sliced open Calvin’s little baby hands. Of course, the fault lies with us, not Denis. Actually, it lies with Calvin, right? Who thinks it’s fun to slap metal doggies?

As the boys cavorted, Hoang hung back with Denis and they talked a bit about his process and how he got to where he is today. Actually, Denis apparently asked Hoang who I was and she told him about CTMQ. He seemed only mildly interested in my nonsense, which was fine by me.

But before long, as we strolled past frogs and Airedales and pigs, Denis and I were chatting about some of the local sites. 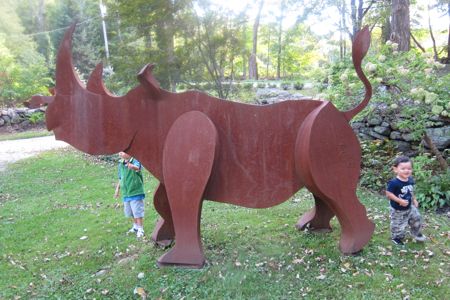 On the Appalachian Trail: “I had a guy, a thru-hiker, who had stopped into Kent and had seen some of my pieces downtown there come by. His trail name was Rhino and I had a rhino in the yard. He loved it. 2 months later he was back with a truck and a check.”

On Kent Falls State Park, which abuts his property: “I used to let people park here and walk through my woods to the park. I’ve stopped doing that though because I got tired of picking up their trash. But you guys can do it if you want.” 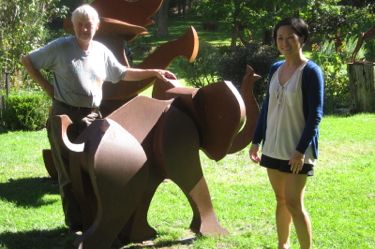 Aww, thanks Denis! By the way, I can think of worse backyards than Kent Falls. He continued, I love walking back in the woods and going to see the falls when I want to. Seriously, that has to be pretty great.

On the Eric Sloane Museum: “You haven’t been there? What’s wrong with you? It’s absolutely great and they have others stuff there too that your boys would like. You have to go there. Why haven’t you gone there yet?” 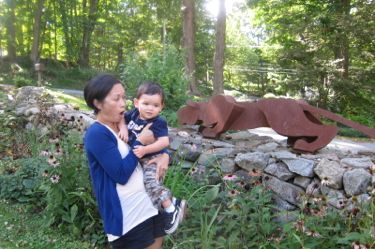 On the thing about negligent parents: “I’ve had to limit visits. I don’t know what it is, but the worst visitors here are young mothers. They just don’t care anymore and they let their kids run wild and climb on the sculptures and try to push them over. I’ve had to request them to control their children and they’ve then gotten upset at me! I’m only trying to protect their kids and they think I’m stepping on their toes. No more young mothers with their kids here. They are awful.”

On my complimenting his welds: “That’s sort of the point.”

On my boys: “They are good kids. They listen to you and respect you. You and they are welcome back anytime.”

On Damian’s special needs: “Oh he’s doing great. He doesn’t need to talk as much as others because he is so expressive. Just look at him! He’s having a ball! He’s doing great and he’ll turn out great.”

On Damian’s iPad: “You like your Etch-A-Sketch? Me too.” 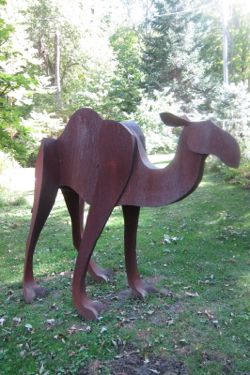 On Litchfield County being overrun by Manhattan millionaires: “Oh, they’ll all be gone in a few weeks and we’ll get to enjoy ourselves again until May.”

On his rescued Airedales: “They are loud and territorial and will bark like crazy when you go near the house.” 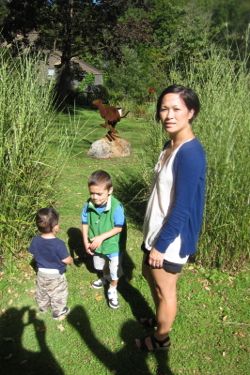 Denis’s wife is also an artist – but of a different sort. From what I gathered, she makes doggie stuff; mostly Airedale wooden cut outs and cutesy paintings and stuff. I’m not into that stuff.

But I am into giant metal African animal sculpture. I would totally buy one of these things if I had the proper property on which to display it (which would mean I could drop $5K on a stalking panther for my awesome Trex Deck). I would enjoy it year round – even in winter.

I mention that because Denis seems to be almost defensive about his art in winter on his site:

Winter is when outdoor sculpture really makes an impact. Though spring and summer is when you are out in the garden amongst plants and sculpture, large pieces of art can be enjoyed from a distance through your home’s windows year round. Contrasting with the bright snow, the warm brown of the naturally finished steel becomes an even more attractive focus of your property during the house-bound winter months.

Catch that? The “warm brown of the naturally finished steel.” Most people call that “rust.”

I love Sculpturedale and I love Denis Curtiss. 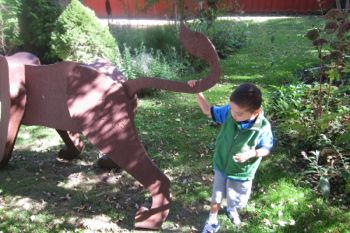