What’s the dealio with this place? D’Elia is the dealio, that’s what. Oh what a tool I am. 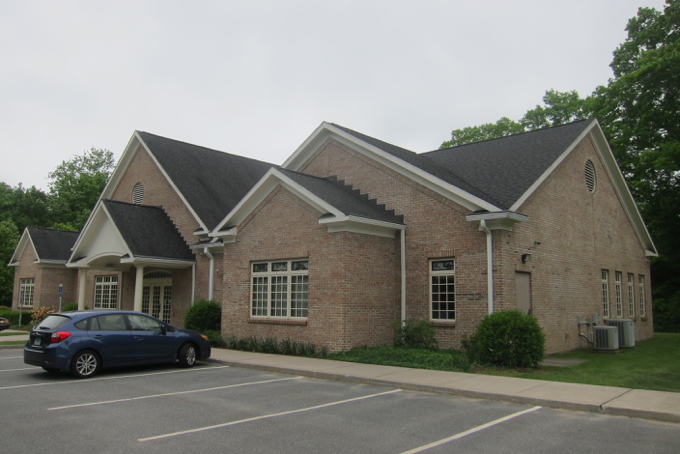 Here we are again, at a little museum devoted to the singular passion of one man. My favorite type of museum. The kind of museum that makes this whole crazy decades-long CTMQ project worthwhile, fun, and yes, exciting. 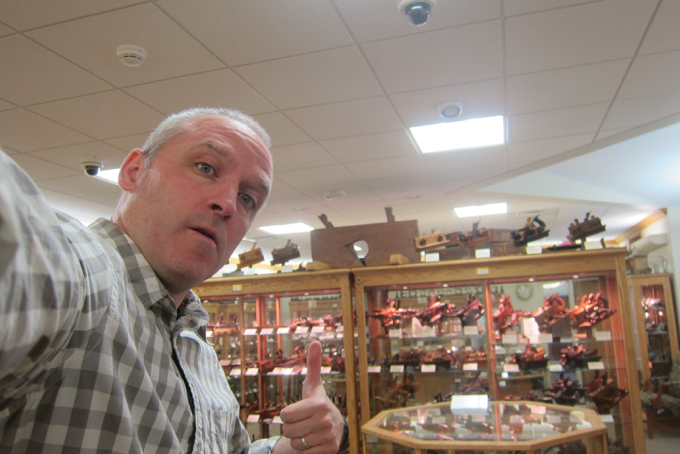 Which… is crazy. And as crazy as that is, you’re reading a page written by a guy who makes it his life’s hobby to visit the hundreds of museums like this around the Constitution state. (Which of course makes me crazier. I accept that.)

With museums like this, one must reach out to the proprietor to set up an appointment to visit. I did exactly that and arrived right on time to find Mr. D’Elia eagerly waiting my arrival. Andy is an older gentleman, forced to use assistance to walk around. His mind and wit, however, were as sharp as a tack during my time with him. I’m not sure exactly what I was expecting, but if it was a room full of antique woodworking hand planes, then I was satisfied. 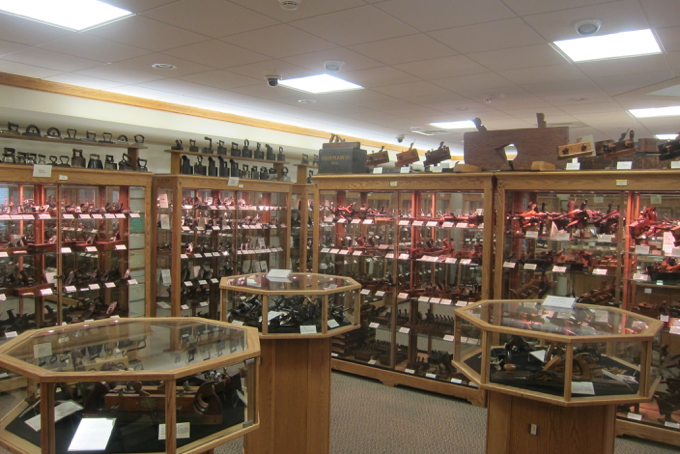 Andy’s extensive collection has many examples of patented transitional planes from 1820 to 1940 featuring inventors such as Knowles, Holly, Loughborough, L. Bailey, Rodier, Worrall, and many other rare inventors. All of the antique planes were acquired by Andrew D’Elia over the last 35 years. The collection consists of rare Stanley, Sargent, Connecticut plane makers, and a number of Dutch and English planes.

Also on display is a collection of rare 18th century wooden planemakers such as F. Nicholson, Chelor, I. Nicholson, I. Jones, Jo. Fuller, Jn. Tower, and others. 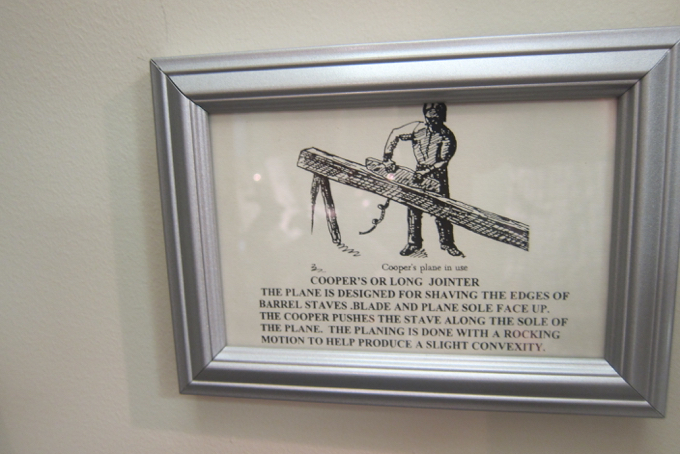 I’m sure this all means something to the people this interests, but man… that is a very specific subset of the human population. I’m not the handiest dude around, and you won’t find me in the woodshop on weekends making cabinetry or whatever, so I know I’m not in that subset. But I visit tons of museums housing collections of things that don’t particularly interest me. 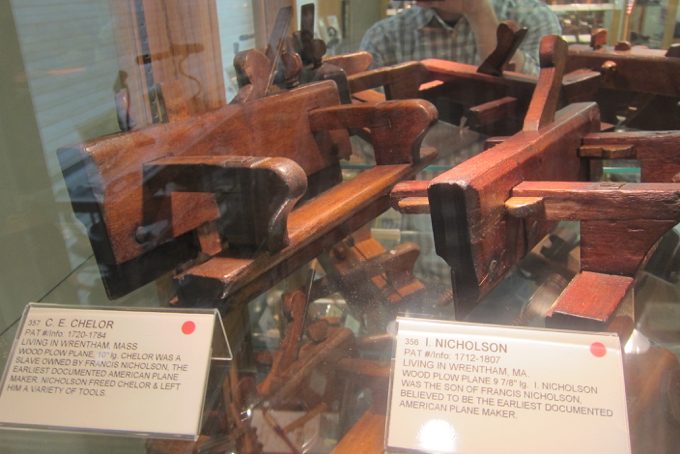 And that’s hardly the point. This interests Andy. It’s his obsession. To spend time with people like Andy in his 1,000 square foot museum that bears his name – and to hear his passion for planes and encyclopedic knowledge of them and their history is a singular experience. My man really, really loves antique woodworking hand planes. The collection of patented planes is probably the most ever assembled in one place. A number of the patented planes are represented in great depth. 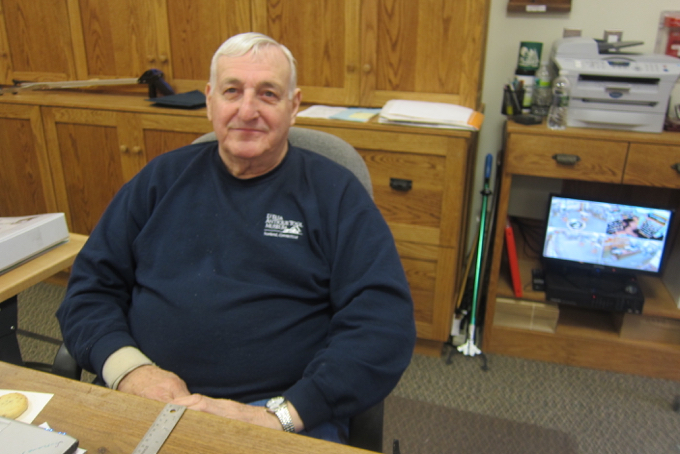 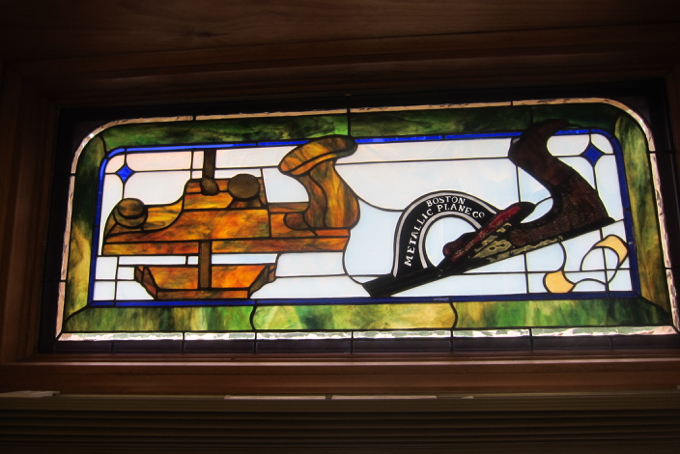 He has written a book about the things and he gave me a copy of the five-pound hardcover, full-color, high quality, handsomely bound tome. The 340-page book is… all about antique woodworking hand planes. It’s more or less a catalogue of them, each plane professionally modeled, photographed, and described. I… I… didn’t exactly read it. But I did leaf through it and, well, it’s the museum in book form. 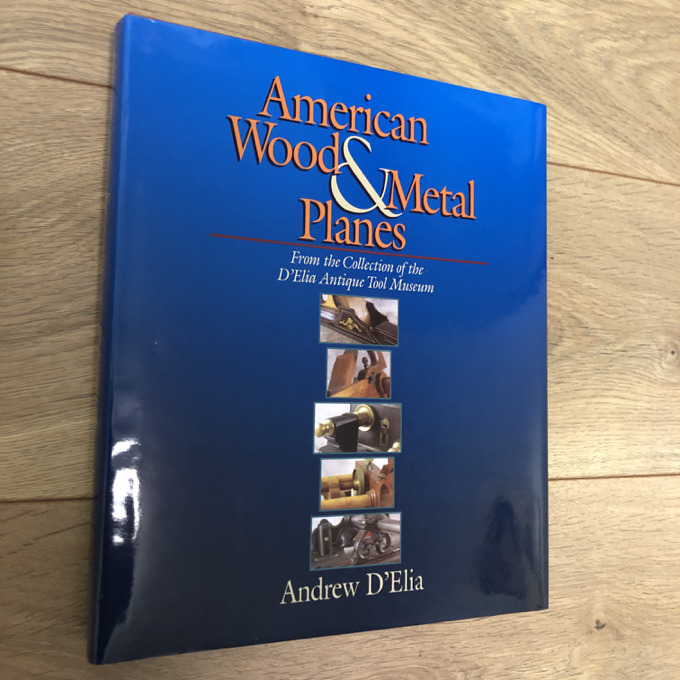 Which is cool. If someone wants to see Andy’s collection but can’t quite make it to Scotland, Connecticut, one can purchase a copy. In fact, if you’re reading this and want to come pick up my copy from West Hartford or Windsor, let me know and it’s yours. (I’m not paying to ship the thing. It’s heavy.)

Andy D’Elia founded the D’Elia Foundation that helped fund the new library for Scotland. The deal was that he’d get 1/7th of the space for his museum. (D’Elia made his money from Atlantic Packaging, the Norwich business he owned for decades.) The story of how the collection came to be is kind of cute. It’s also a cautionary tale – this sort of thing could happen to any of us. 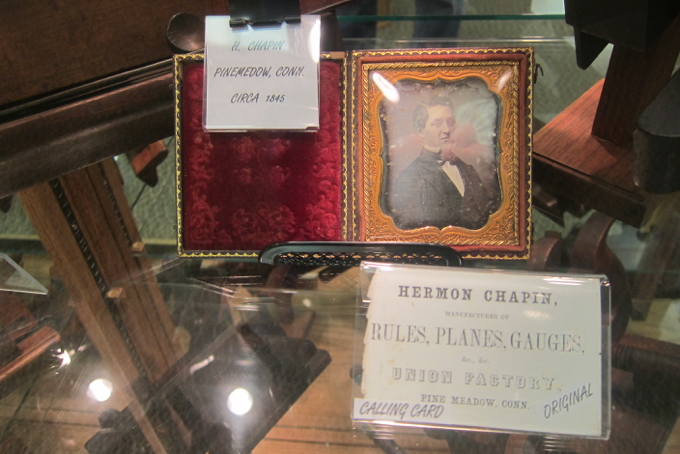 I mean, say you’re a guy in 2006 that thought it would be “funny” to visit the “handful” of Connecticut museums and “blog” about them. 13 years and thousands of website pages later… here I am. As for Andy, he was helping to restore an old colonial in New Hampshire with some centuries old crown molding.

One room needed a new piece, and Andy decided the only way to recreate it was to purchase an 18th century crown molding plane. So he found an old E.B. Jackson one at an auction for $35… which is estimated to be worth over $1,000 today. (My website is… not worth that.) From that first purchase, Andy was afflicted with the bug. He went bonkers on eBay, at auctions, and through tool-collecting groups. Before he knew it, he had a massive collection of antique woodworking hand planes. Obviously. 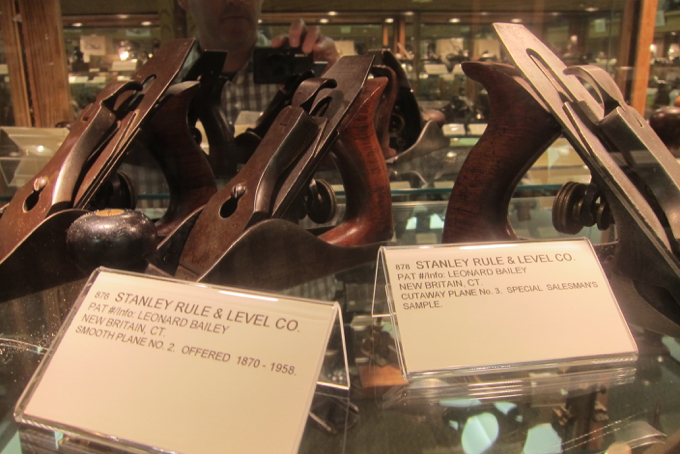 His only problem was he no longer had anywhere to store the collection, and no one could appreciate it. Museums that were interested were too small and would relegate his babies to storage. Voila, the Foundation was born. Since the Foundation owns the planes, they can’t be sold and the collection can’t be broken up. Even though (most likely) you and I don’t necessarily appreciate this whole thing, tool collectors do travel from far and wide to see the collection and to talk shop with Andy. 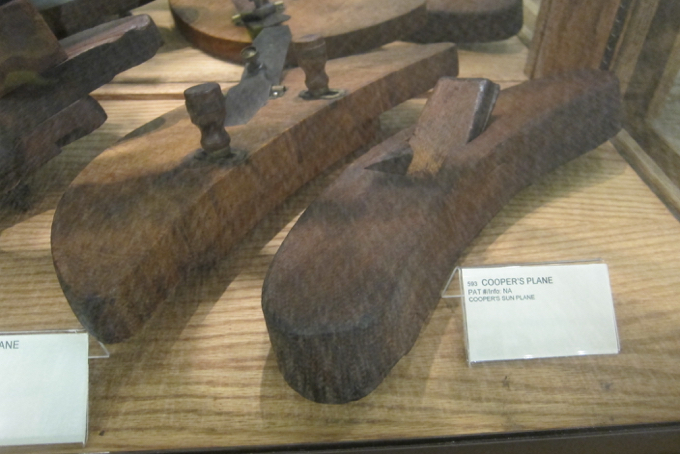 Andy said that almost all single guys that come here are serious collectors and know about planes. So I was the outlier. A single guy taking pictures who had no real interest in any of it. My interest lies more with Andy and what makes him tick. Sure, he has the tools and carrying case that once belonged to Louis Rodier. See, I have no clue who Louis Rodier is, but those other guys surely do.

The rare planes from makers such as Francis and John Nicholson and Cesar Chelor get some guys all weepy. Delia says his collection is not an obsession, but a mere responsibility to preserve a part of history he feels is very important. (It’s an obsession. Clearly.) 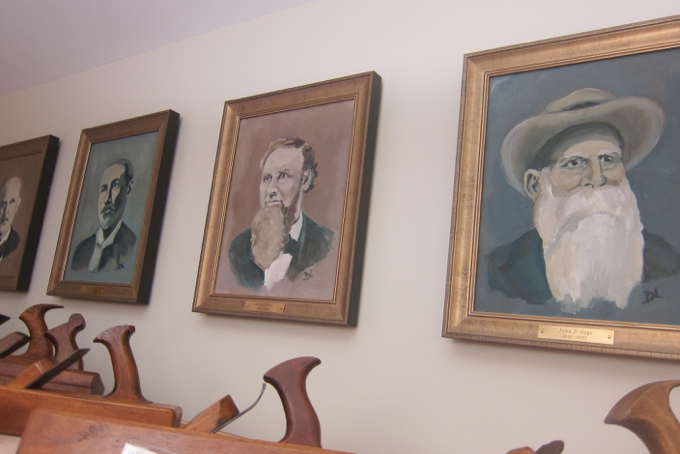 My absolute favorite thing about this museum is Andy’s rating system. Wait, back up. I love his organization and ability to display a billion (est.) planes in a small room in an organized and navigable way. (There are actually over 1,000 planes on display in over 20 oak cases with glass doors and shelves.) A lot of thought has gone into this place. But as I was saying, Andy’s devised a rating system for the planes, and it’s beautiful: 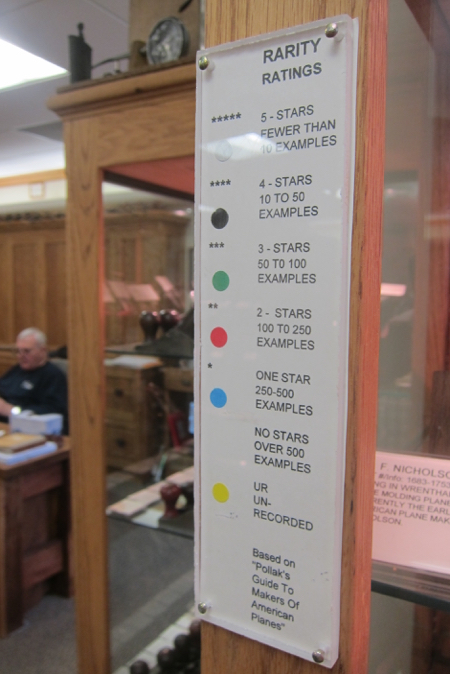 Andy provides visitors to his free museum a tool guide, which lists every dang plane and its location. Love it. 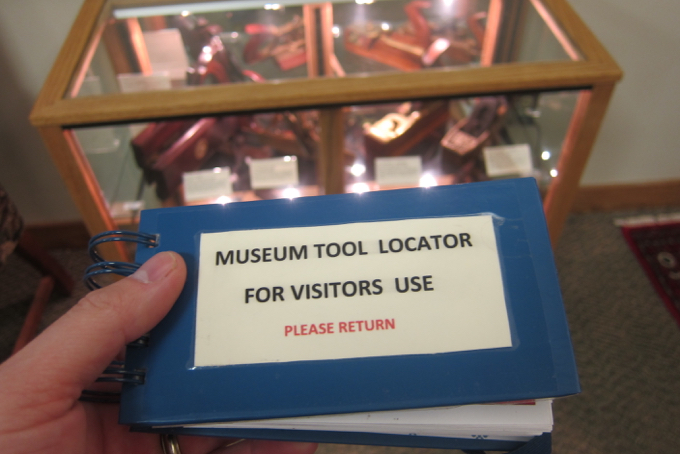 I mentioned there is another collection here of non-planes. That would be the sad iron collection of one Mrs. Anna Mae D’Elia, presumably Andy’s wife. The conversations they must have. (I’m reminded of when my wife and I both worked at Aetna. My god, we must have bored our friends to tears talking about work back then.) 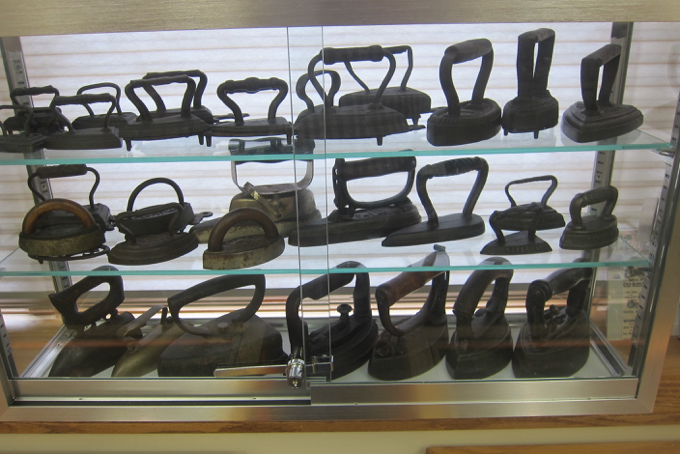 And there you go! The D’Elia Antique Tool Museum of Scotland, Connecticut. Just plane nuts. 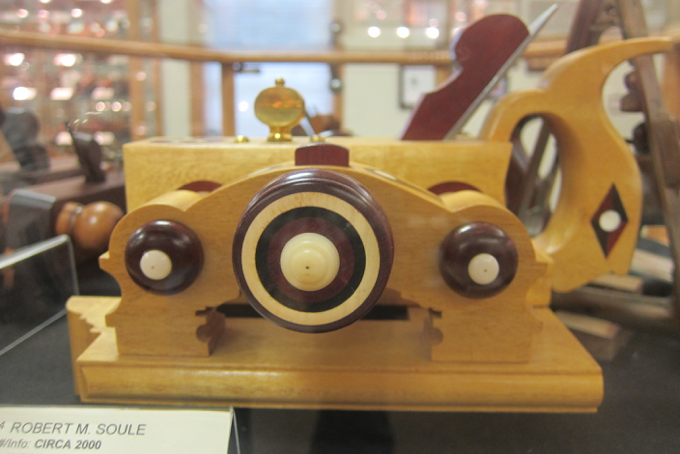