A Singing Raisin, a Green Blob of Talking Clay, and a CelebriDuck Enter a Museum…
Cheshire (Google Maps location)
September 6, 2014

[I have stolen two pictures – the good ones – from BuzzFeed for this page, because I didn’t know these museum existed within the larger museum until after I visited.]

CTMQ’s visit to the Barker Museum

In one sense, this will be the lamest and laziest museum page you’ll ever read on this here website. In another, it may be the most enlightening into how my brain works and how the most oft-asked question of me – “How many museums are there in Connecticut? – can never be answered with precision or confidence. 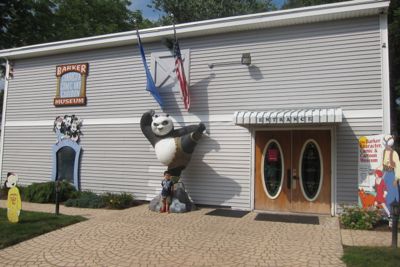 Heck, even though this is the 277th I’ve visited in Connecticut, not everyone would agree that I’ve been to 277 museums at this point.

I think I have good arguments for my “system,” and I think I have been to enough places around Connecticut to feel good about it. But since this question comes up every time I’m on a radio show or podcast or whatever, I’m going to use this page to discuss why this issue is actually an issue.

And probably only me.

And now that I think about it, my system contains enough arbitrariness as to make it not much better than the next guy’s system.

Let’s look at this page. Three museums you’ve never heard of – and all in Connecticut. But if this is three museums, why in the world have I rolled them up into one page? And have I ever done this before? 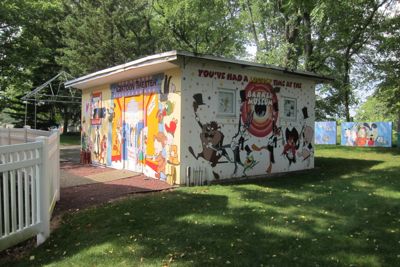 First question first: Because these three “museums” are all housed under the roof of the Barker Character Comic and Cartoon Museum in Cheshire. There is no specific signage for these “museums” within the museum, although I did double check with them. Here is their response:

Yes, the Barker Museum is still the only official home of the Celebriducks, and one of the official Gumby and California Raisins museums.

Ok. I think you see how they don’t warrant three separate museum pages now. I also have almost no pictures of these hallowed museums because the Barker Museum disallows pictures.

The Barker Character Comic and Cartoon Museum has a separate Art Gallery too, but I’ve rolled that into the same page as the museum proper. I could go on and on – you don’t want to get me going with Boothe Memorial Park or the Simsbury collection of history museums. It gets a little crazy.

But I’ve used this page to explain just how crazy it gets for us list-obsessed people. The Barker Character Comic and Cartoon Museum could be ONE museum visit on CTMQ, or FIVE. I have, I think wisely, chosen to make it TWO.

Of these three silly museums, this one is the most “important.” So to speak. For it is the only official CelebriDucks Museum in the world! Since you probably have no clue what CelebriDucks are…

According to a Barker Museum video, they are “Dedicated to putting an end to mediocre bathing.” 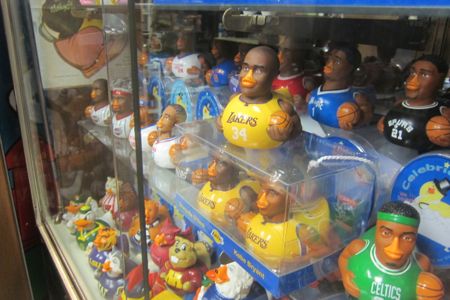 CelebriDucks is the original creator of the first ever collectible celebrity rubber ducks of the greatest icons of film, music, athletics, and history. We have produced CelebriDucks for the NBA, Major League Baseball, the NHL, NASCAR, NCAA Collegiate Mascots, and also people such as KISS, Elvis Presley, The Blues Brothers, The Wizard of Oz, Mr. T, Shakespeare, Betty Boop, and many others.

The Barkers still own and operate a company (right behind the museum) that makes promotion all that promotional “stuff” you see everywhere. Called Barker Specialty Company, I’m guessing the Barkers have had a relationship with the guy who owns CelebriDucks (which began as promotional tchotchkes) and somehow got the company to send the Barkers every single duck they’ve ever produced.

Which, I guess, is pretty cool. Here’s the (main) museum talking about the Celebriducks Museum:

In a close partnership with CelebriDucks creator, Craig Wolfe, the Barker family is proud to present the only location where you can see every CelebriDuck that has been introduced over the years, whether long retired or newly released. The Museum displays hundreds of ducks from the worlds of Entertainment, Sports and Personalities.

I saw a case of the ducks and took the one picture of them you see above – of the NBA player CelebriDucks. And I only took that because they had a Sixer, Allen Iverson, featured prominently. Suffice it to say, the CelebriDucks Museum, housed in the Barker Character Comic and Cartoon Museum, has a ton more CelebriDucks.

But I think we all agree it’s not necessary for me to return to check it out in greater detail.

Actually, I did return later. Because of the changed photo policy. So maybe I will revisit this page and add pictures someday. 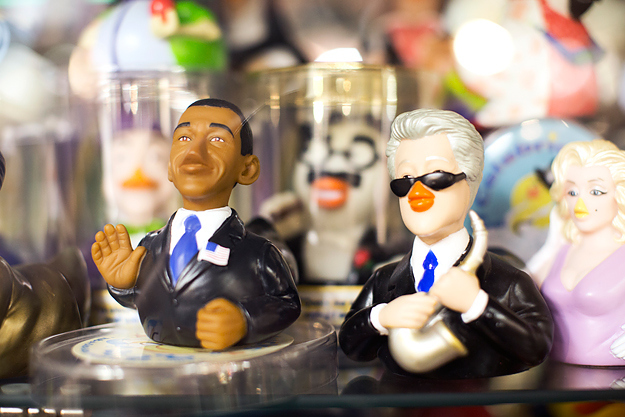 If you thought my information on the CelebriDucks Museum was lacking, I can really disappoint you here.

‘Cause I’ve got nothin’. Like, nothing at all regarding “one of the official California Raisins Museums” in the country. Fortunately for us all, the Barker Museum has a bit about this museum within a museum.

Barker Character, Comic & Cartoon Museum has one of the finest California Raisins collections in the world. The award winning commercial campaign, created in 1986 for the California Raisin Advisory Board, featured four raisins singing “I Heard It Through the Grapevine“. The commercial was an instant hit, resulting in a torrent of collectible merchandise, most of which is on display in the Museum.

The commercials were produced by Vinton Studios using the stop motion technique known as claymation. As their popularity grew, the commercials featured the voices of Ray Charles and Michael Jackson. The Museum’s collection features actual claymation models of Michael Jackson and the four raisin musicians, who were eventually given the names A.C. (vocals), Beebop (drums), Stretch (bass), and Red (guitar/piano). The Hardees restaurant chain produced the most collected California Raisins merchandise, in the form of small, non-poseable California Raisins figures. 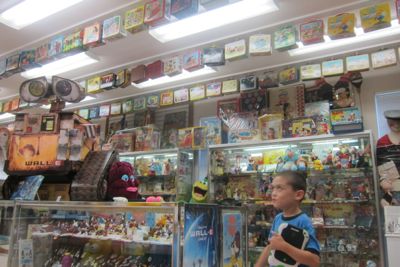 Okay. There you are. I walked right past this whole “museum,” because there are 10,000 other more interesting things at the Barker Museum.

Now that we’ve reached the last museum within the museum, I can admit that I have less than nothing on Gumby.

But hey, they say this “museum” exists, so here you have it.

Interestingly, Gumby has been around far, far longer (he made his first appearance in 1955) than the other two museum within the museum subjects. There are tons of other museums around the world that feature Gumby. The Raisins have only been around since the 1980’s and CelebriDucks even less. 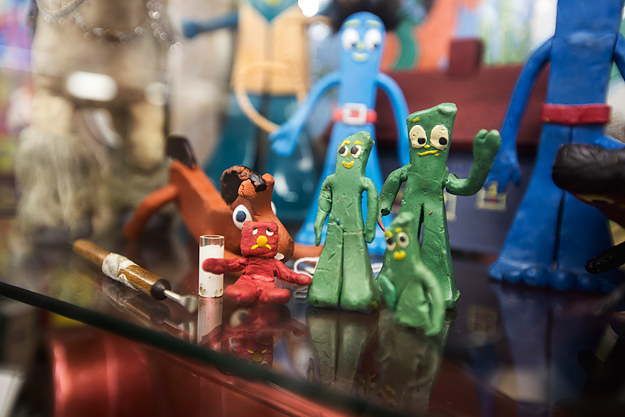 Buzzfeed photo! This platicene Gumby is a REAL Gumby that was REALLY used in the TV show!

Okay, I’m not sure how that’s interesting – or why I’m making this page any longer than I need to.

The Barker Museum is awesome – like, truly awesome almost in a literal sense. It’s incredible. The fact that they include these three museums within themselves is more of an interesting footnote than anything.

But CTMQ is stupidly inclusive and thorough, so now we have this “museum visit” page for three museums that I didn’t know I’d visited.