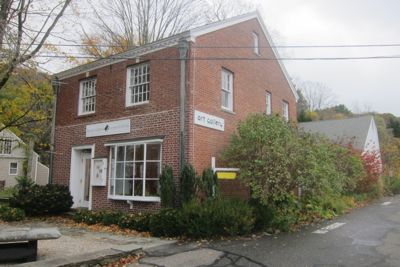 And the Washington Art Association building.

I’d been to various parts of Washington several times over the years and always found it quite beautiful. The Steep Rock Association’s properties provide some of the best hiking in the state. The drives down route 47 through town is stunning; in the fall? Impossibly stunning.

But I’d never really poked around Washington Depot before. It fulfills every overwrought platitude bestowed upon small New England towns ever uttered. 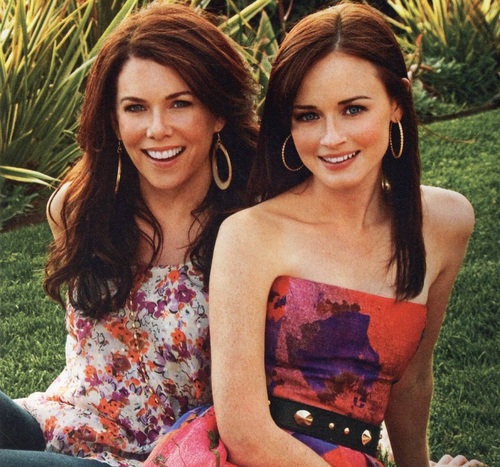 I’ve never seen “Gilmore Girls,” but I’ve always known that its creator was inspired by Washington. The Mayflower Inn is south of Washington Depot, over in the just as cute/quaint/adorable Washington Green section of town – and, for the record, it is so absurdly expensive as to be alien to me. Anyway, here’s what that show’s creator had to say about Washington:

The show is set in the fictional town of Stars Hollow, Connecticut. Amy Sherman-Palladino, the show’s creator, drew inspiration for Stars Hollow while she made a trip to Washington, Connecticut where she stayed at the Mayflower Inn, which she found beautiful. She was amazed at how the people of the town knew each other very well and by the next morning of her stay she had written the pilot’s dialogue. She explained: “If I can make people feel this much of what I felt walking around this fairy town, I thought that would be wonderful. […] At the time I was there, it was beautiful, it was magical, and it was feeling of warmth and small-town camaraderie. 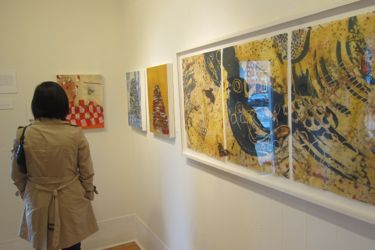 Nailed it. While Hoang and I walked around the little “town” around the Art Association, people smiled at us and said hello. They wished us to have nice days. The worker at the bookstore was just as happy to greet us as she was to say goodbye (without having bought a thing). The car repair garage looks like it’s from a model train layout.

You get the point.

And so it was with these happy thoughts that we entered the Art Association building, situated at the end of “town” near the cute post office and the adorable state police building (which houses one officer, apparently.)

We were not greeted warmly. No one gave us a smile. Hm.

But then I realized, we had entered the art world, and such niceties here would be unacceptable. (And let’s be honest, with my need for pictures, I was quite happy to be left alone.) 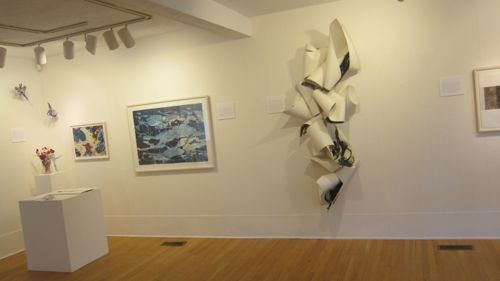 The Washington Art Association was established in 1952 by a group of local artists who were seeking ways to nurture creative life in and around Litchfield County. Their goals were to promote greater understanding and appreciation of art, and to encourage and facilitate the study, creation, and exhibition of art.

The high caliber of exhibitions for which the Washington Art Association is known was established early on, with celebrated artists such as Alexander Calder, Andre Masson and Yves Tanguy participating in early shows.

Since its founding, the Washington Art Association has staged more than 450 exhibitions.

Impressive. Their first home (and all its art) was washed away in the 1955 flood. But they’ve been in this building since rebuilding back then, with an addition added in the 1980’s. The staid brick building is somewhat incongruous with the open, well-lit, and airy interior. 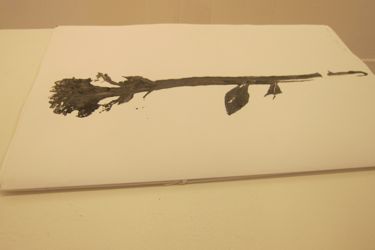 The exhibition during our visit was Off On Tangents: Unique Techniques in Print On and Off the Wall. It doesn’t appear that this place keeps any sort of permanent display up at all times. I’ll spare you the arty explanation of the “theory” behind the exhibit and just say, “16 artists work with print media in every imaginable form and the museum shows them to us. Some are on the wall, some are not.”

(If you’re concerned, here’s the type of stuff about the exhibit I’m sparing you from: “Whereas Amos combines carborundum techniques in uniquely printed rice paper surfaces, the prints are varied in their substrates; often free flowing and unframed or sometimes adhered to canvas or heavier paper. They mesmerize us with their interplay of visual references – primitive and Aboriginal/ technological and cartographic – their playful dalliances delight!”) 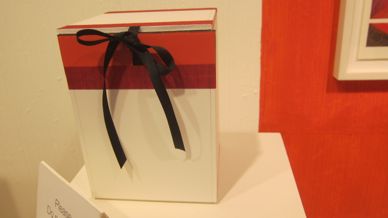 I’ve never really been a big fan of print work. I mean, I appreciate it and all, but it rarely strikes me as something I’d want to own. That was the case for much of what was on display during our visit. This holds especially true for a lot of the “off the wall” stuff, like, oh, let’s say these boxes above. 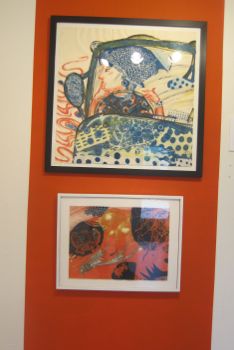 They’re just boxes. Yet, at the same time, the airplanes you see in another picture on this page, I felt were pretty cool. So that’s the thing with art – for the most part, it’s very subjective. And as a very casual observer of art, who tends to have certain like and dislikes, my opinions of this stuff should be more or less ignored.

And besides, the exhibit we experienced will be completely different from whatever it is you’ll see in Washington, because this one left the building a few days after our visit.

So that brings me to this piece, by [artist’s name redacted], about which my lovely wife noted, “Calvin* could do that.” 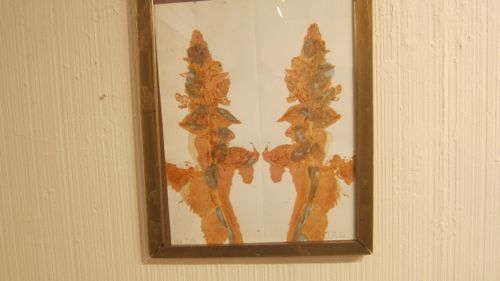 *Calvin is our three-year-old son.

Of course, Calvin didn’t do that, which is the point of art. (Nor did Calvin command the $850 this piece was selling for.)

Of course, there were several pieces I very much enjoyed. Like Catherine Mosley’s Dot Flash Dash – which was a huge collage grouping of abstract printed papers on boards, totaling up to about 16 square feet. I totally dug this. And I like much of her work. 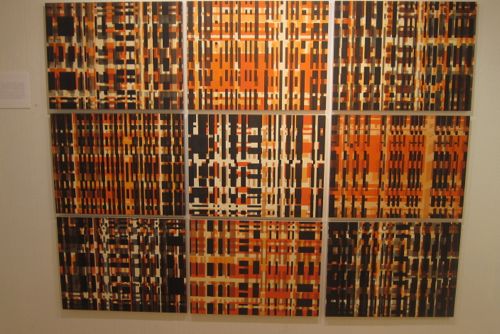 And then there was Liz Dexheimer’s Koi Pond stuff, which I found beautiful. Here’s some more of her stuff. As it turns out, Ms. Dexheimer lives in Washington and if her works weren’t in the $2600 range, I’d love to hang one of her pieces in my house.

But my favorite pieces of the exhibit, hands down, were those by John Davis, an artist from Nova Scotia. His pieces were just excellent; the more I stared at them, the more cool, and downright creepy (in a good way) things and faces I saw. I can’t find any web presence for this artist though… so artistic of him. 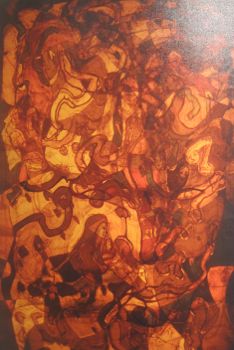 As Hoang and I made our way through the exhibit, some other women who worked there appeared and disappeared through various doors. One of them gave me a nice smile, so I’m sure she had a talking to about that. The woman at the desk in the front never – not once – even glanced our way. Kudos to her for keeping it art-world real. 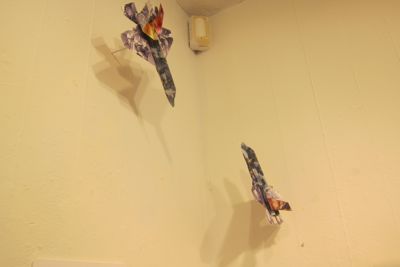 Perhaps it was our decidedly West Hartford accoutrements. I mean… Levis jeans for me?! A Subaru Outback?! Banana stinkin’ Republic?! It’s a wonder we even got through the door.

I kid, I kid. Washington has a lot of money, sure, and the grocery store across the street that locals refer to as “Tiffany’s,” but it has a decidedly pastoral Litchfield County air about it. The people ARE truly nice, and I know that the women at the Art Association are lovely. It’s not like either of us made any gesture of politeness towards them.

This space is nice, and really, if you ever find yourself in Washington Depot, I encourage you to stop in. A rich history, an impressive resume of exhibitors, and probably very nice staff will make it worth your while. 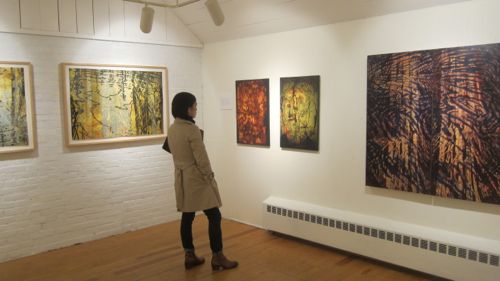 Upon leaving, we both admired this stone bench, sculpted to look as comfortable as a bed. Hoang loved this thing. Through my diligent research, I believe this was created by local (Bethlehem) artist/sculptor Mark Mennin. He makes bed-like sculptures that are “about bonding a real body to an earth material. It becomes a tidier way of rolling around in the mud” and a way to feel how soft our bodies are next to something that “can feel deceptively soft and look deceptively soft,” but is dense and hard. Stone provides the “challenge of making something fresh and contemporary and relevant out of something that has more history than any other material.”

(He had an outdoor exhibition in Washington a few years ago, so I’m thinking this was received then.)

Do you think when finishes a piece he sings, “Byyyy Mennin!” 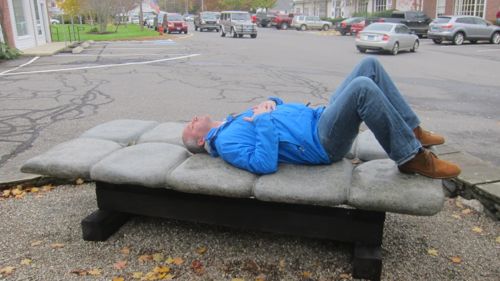