Herman Melville… Nathaniel Hawthorne… Stephen Crane… Emily Dickinson… Me. Perhaps not – but Mt. Greylock has inspired me to write this report, which, althought not quite “Moby Dick,” it will have to suffice. I mention these authors because they all lived, at one time or another, pretty close to Greylock. I had originally planned to check out a few of their homes, but then I remembered how boring that actually is. 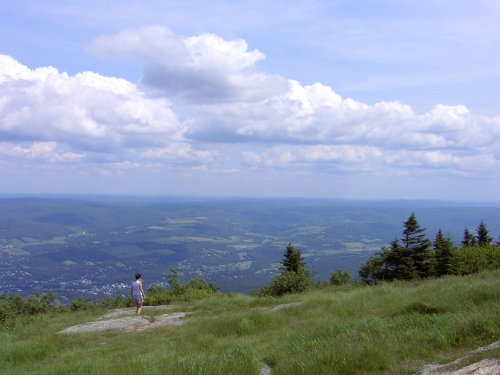 In an effort to begin breaking Hoang’s boots in for “the big one” come late August, we decided to start getting out as much as possible on weekends for some decent hikes. The first of these excursions was this trip to Mt. Greylock, in extreme northwestern Massachusetts. When we left base camp (New Britain, CT), Hoang was a bit under the weather but was insistent we follow through on the plans. So we trundled into the trusty (ahem) Mitusbishi Galant and made our way north towards our quarry up 1-91. The day was beautiful, if not a bit too warm (pushing 90 degrees, but not too humid) and as we arrived two hours later in artsy North Adams for a pit stop, I tried to figure out which approach trail we should take. Of the several options, Hoang was not shy about voting for the shortest route I could find.

Of course, the shortest option would have been to simply drive to the top without breaking a sweat. (Although that’s not true, seeing how the Galant has a. No air conditioner and b. none of my faith that it would actually make the climb successfully causing me to, of course, sweat even more.) But neither of our egos or legs would stand for that. We ain’t no suckers. So we drove down parallel to the east side of the mountain, south to Adams and searched in vain for the turnoff road to the trailhead. Before we knew it, we had overshot the road I was looking for by a couple of miles but as a result, we got to check out another portion of the Appalachian Trail. We followed it in my car through a little enclave of starter homes in Cheshire and noticed it went through some backyards. I’ve always thought that would be really cool. Hoang disagrees for some reason.

We consulted a better map with the local back roads on it and found our way to the trailhead I was looking for: Gould Trail off of West Mountain Road. The little parking lot afforded a nice view of the challenge that awaited us and with some words of ecouragement, we headed through the small meadow and into the woods. That was the easy part… We quickly came to realize that the shortest route also meant the steepest route. Immediately the trail began to rise sharply, essentially heading straight up the side of the mountain to the ridge that supposedly supplied the vision of the great whale’s back for Melville’s most famous work. Quickly, the heat became a factor as we were both effusing buckets of sweat. I could see the sickness written on Hoang’s face, but she trudged on with nary a complaint. Along the way we crossed a stream with clear, freezing cold water and Hoang had her first experience with one of the simplest, most otherworldly pleasures of hiking: splashing fresh mountain water on your face and neck. It’s something I’ve certainly never taken for granted.

The Gould Trail does not mess around, but I’m glad we chose that route as it gave a decent taste of what we’ll be facing in the White Mountains in August. I kept up the encouraging banter as we made our way to the ridgeline and met up with the AT. I finally heard some traffic and knew we were close to the road to the summit. We emerged from the woods onto the asphalt and were suddenly plunged into a thriving day-tripper hotspot with traffic and lazy New Englanders. The sudden “crowd” gave us the adrenalin boost to help step up our pace a little bit. (We’d seen only one other person on our chosen trail up until this point.) From here, it was only a quick half-mile or so (still climbing, mind you) jaunt up the ridge north to the summit and all its attendant tourist accoutrements. 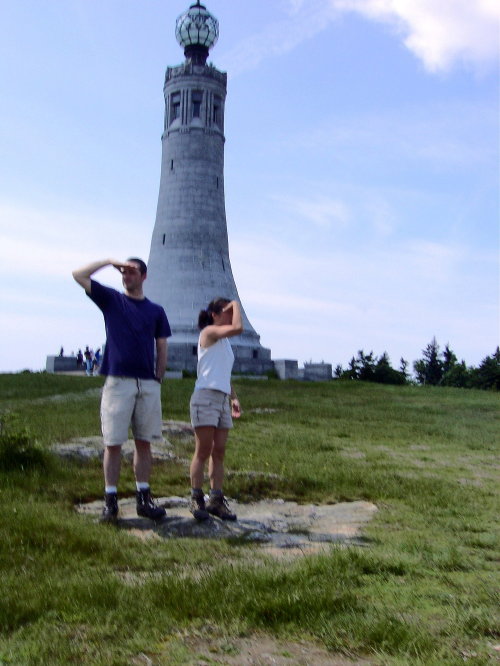 I always get a chuckle out of the AT… It goes up and down every possible mountain but seems to always just miss the actual summits. Mt. Greylock is no exception as we left the trail to head up the last 100 feet to the tower, which marks the summit. I was very proud of my fiancee and we agreed that the views were well worth the effort. Here I was, taking in the view of the valleys to the east, with the towns of Adams and North Adams down below – all the while hearing locals who drove up confust which town was which, which direction they were even looking, which mountain in the distance were which, and where Vermont would happen to be. Man, it was all I could do to keep my mouth shut about their geographic ignorance… But I did, believe it or not. I mean, this one family lived in Adams and drove right up the mountain and couldn’t figure out that they were overlooking their own town! Oh well.

There was one rather interesting family up there which was ripe for dissecting. Using our uncanny observational powers, we deduced they were real live Mohawk Indians. The young men were sporting authentic mohawks and they didn’t wear any chain wallets or have tattoos. The elder women were also in some traditional garb and they were talking about the power of the mountain and the beauty of nature. I wanted a picture, but would have felt like an idiot taking it. Eventually we got a park ranger to snap our picture, bought a Popsicle at the lodge, took a bathroom break, and began the descent.

In better spirits now, and fueled by frozen sugar water, we flew down the mountain much faster than I thought we would. We noticed no one else was coming up our chosen route (are we the only fools who have opted for the “straight up” Gould Trail approach?) and got to the car in about 45 minutes. Once safe and sound, Hoang assessed her blisters: Nothing serious, and I began the 2-hour drive home. The irony is that I got lazy and only wore liner socks, which, despite the thousands of miles logged in my boots, resulted in a couple small, open blisters. Hoang only wore hiking socks with no liners. [Update: About a month later we set off for a long day hike on the AT in Connecticut and Hoang, following my lead from this trip, only wore liner socks with her brand new boots. I didn’t notice until a mile up the trail after she complained that my duct tape and moleskin trick wasn’t working. While disappointed we couldn’t hike, I welled up with emotion at the thought that she was just mimicking my dumbass from the Greylock trip.] 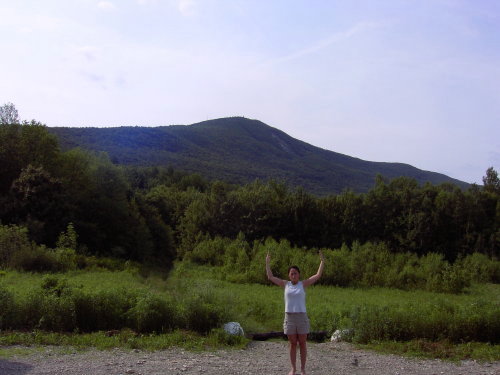 On the way home, we passed the famous Tanglewood concert place and several chic-chic towns in Western Mass. I found that the Route 7 to the Mass Pike route choice is about a half hour quicker depending on the traffic. Plus, who knew there were moneyed people in western Massachusetts? We stopped at a high-end food store in Lenox to procure some dinner and ended up spending way too much money on some marlin (never had it before), fresh corn, sauvignon blanc, and fruit torte. Once on the Mass Pike, I once again marveled at the big sign (near the AT crossing) stating that it marks the highest point on I-90. Fascinating stuff. And I always marvel at the fact that the state pays a cadre of toll takers on this stretch even though it’s free – that is, anyone traveling east from the New York border gets a ticket, which clearly spells out that it’s free until just past the I-84 intersection, and then has to “pay” a real live toll taker nothing upon exiting. I will never figure that one out.

Once back in New Britain, we boiled the corn, made some potatoes and just as the fish was done, the power went out leaving us to eat and reflect on the day’s journey in the dark, hot, third floor apartment while keeping a vigilant eye on our cars which, cloaked in darkness, were ripe for stealing.