This cool little planetarium ignited a heated debate in my house. I mentioned that I would be including it as a museum visit for this website, and my wife roundly chastised me for that. 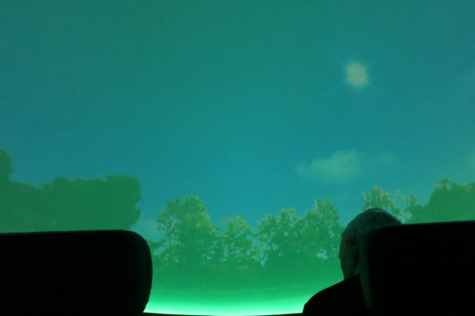 “It’s a planetarium. It’s not a museum.”
“I know. But I will still include it on my museum list.”
“Wait. So those 300 museum visits we just celebrated aren’t all museums?”
“Of course not! I’m very upfront about that, but I can also defend it.”

And it’s true – I can! To anyone other than my wife.

“I just read about the GEHMS Planetarium and the word museum was never mentioned. Not once.” 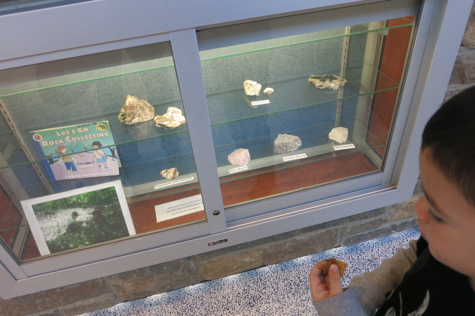 Sigh. Look, I know this isn’t a museum, but really… do I need a separate section somewhere on this site for “planetariums and only planetariums without museums associated with them somehow, of which there are very few?”

No, I don’t. But I have created a new tag for non-museum museums like this: Not Really a Museum Museums. Go ahead and click it to see the others. Seriously – you’ll see there are some very worthy places that aren’t true museums.

Are our two aquariums museums? Yes, right? The Beinecke Library at Yale? Beardsley Zoo? Flamig Farm? The Beckley Furnace? I-Park? In my world, they all are. 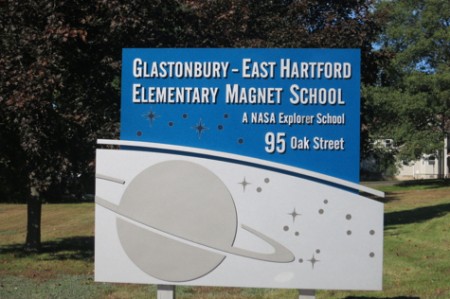 And so is the Glastonbury-East Hartford Magnet School Planetarium. So there.

Even if it’s not.

What it indisputably is, is cool. Really, really cool. In short, it’s a small, brand new, planetarium at a magnet school for K-5 kids. The planetarium is open to the public fairly often and offers a constantly changing array of programs. I’m only really interested in the space programs for kids and not the “laser rock shows” they do. 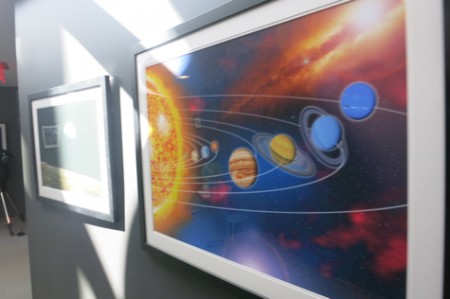 Also? GEHMS is “a NASA Explorer School.” This means that in addition to having a focus on science, students there get to “learn from astronauts, rocket scientists, and engineers.” Who knows who funds these CREC magnet school things, but most are pretty great schools. In addition to a few science/animal displays, the main hallway contains a floor depicting a scaled version of our solar system. 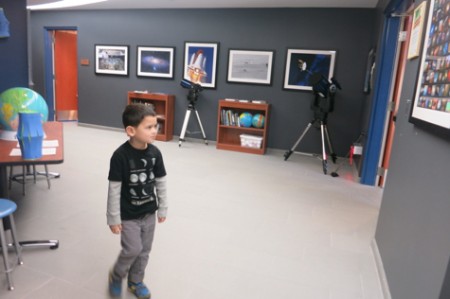 (I had bought tickets for Damian, but it was mutually decided that this wouldn’t be the best thing for him. And in retrospect, that was a smart decision. No way he would have lasted the hour and who knows what would have happened… Note to self: I should contact the planetarium and ask if they’d do a once-per-year special needs show like some movie theaters do.)

Calvin and I enjoyed a short show produced by Sesame Street wherein Elmo, Big Bird, and some Chinese character showed us the Big Dipper, Polaris, and the moon. It was pretty good, but it paled in comparison to the planetariums own production. 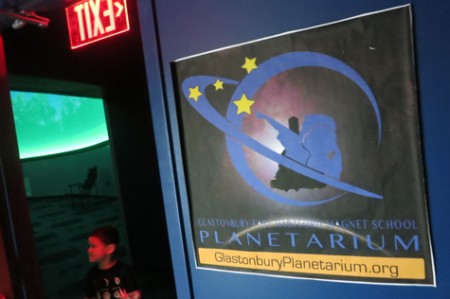 Before we get to that, go read what my friend Courant writer Peter Marteka wrote about this place in 2013.

In that article he wrote that Jason Archer had been hired as the planetarium director. If that name sounds familiar to your CT museum nerds, it’s because he was the floor program director at the CT Science Center for its first few years, and then worked at the New England Air Museum. I met him for an article I wrote for Museum Magazine back in the day. 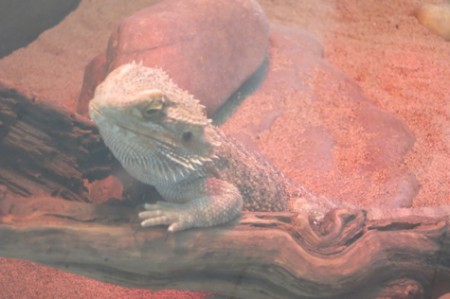 Just a Bearded Dragon in a hallway display

The guy LOVES space and I’m sure he brings some great ideas to this little place.

Anyway, the quality of the projection on the half-dome screen here is excellent. The sort-of 3-D effect of flying through space is top notch. An lovely woman next to us complained of motion sickness throughout the shows. Seriously. 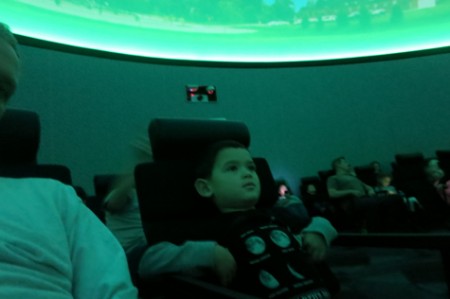 If I have a criticism, it’s merely that the chairs in the small theater aren’t reclining chairs. They are angled, so it’s fine, but you aren’t exactly looking “up” necessarily. But the thing is, this place is for kids and kids don’t care; they just spin around as needed to see the “sky” or whatever behind their heads. And that’s fine.

For the last half-hour, a staffer manned the computer and we discussed the night sky. What was cool about this was that the projected sky was, literally, the sky from the GEHMS parking lot. The digital photography included the soccer fields, the school building, the trees outside – and the sky exactly as it is from this location.

She could select any time of day or night, any day of the year. Oh look, there’s Saturn on the western horizon at dusk! “Who wants to go to Saturn?” 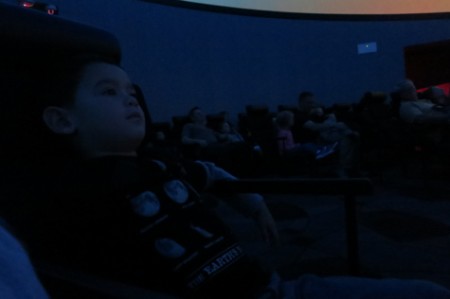 Of course we all did, so she typed in “Fly to Saturn” or whatever, and away we went. Past the moon, the sun fading into space, on to the ringed planet. It was rad.

After the spin around Saturn, we learned a bit about some constellations. Upon learning that Pegasus is really just a square with some stars trailing off of it, Calvin exclaimed, “That’s not a horse. That’s a square. That’s dumb.” 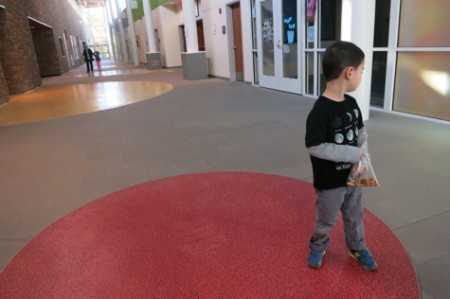 I love my kid.

We took a trip to Jupiter and its moon, Io, as well. Io has volcanism, and when the staffer asked the crown what we thought the black spots all over Io were, no one knew. I whispered “volcanoes” to Calvin, who blurted out, “VOLCANOES!” like he knew it all along. 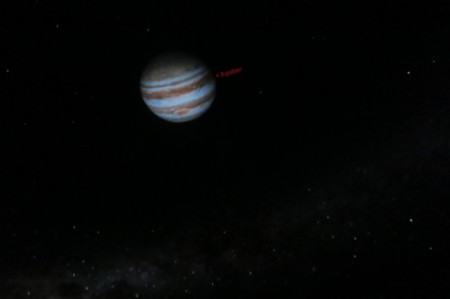 I shake my head at my kid.

There really is nothing better than watching your child’s excitement as he learns stuff. Calvin loved the experience at the planetarium and had a million questions for me afterwards.

He also was quite adamant about his “need” for a telescope for Christmas. “A Batman LEGO set and a telescope, pleeeease?”

Can’t really say no to that. 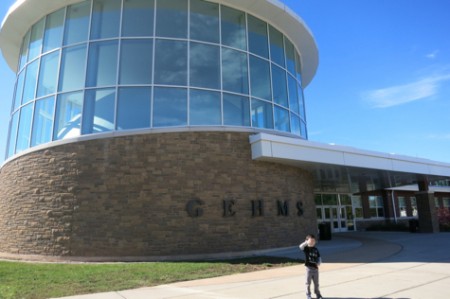