I’m proud of CTMQ. It took me a while to get to this point (a few years), but I’m here. I now accept your praise. 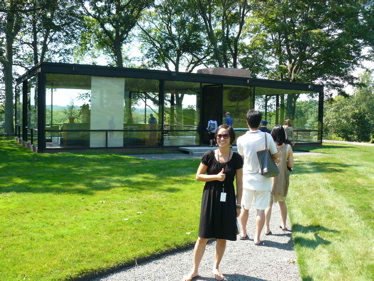 I’m also proud of my wife, Hoang. And this post is sort of the culmination of our “cosmic connection” if there is such a thing – which there’s not, but some people like to pretend. I’ll explain: Four years before we met, Hoang worked with Bruce Clouette with some outfit called Historic Research Consultants, Inc. Somehow, they were tasked with preparing the official National Historic Landmark Nomination form for Philip Johnson’s Glass House.

(Bruce is a traditionalist through and through, whereas Hoang is a straight up modernist. I like to think she influenced her boss – Bruce – to take on the project.)

That’s right, my beautiful and talented wife helped get one of the very, very few mid-century modern buildings its well-deserved NHL status! Such a beautiful woman… Such a beautiful house… Such a beautiful story. In fact, her photographs (and hand-written captions) are now part of the official federal National Park Service archives (see links below). Swoon. 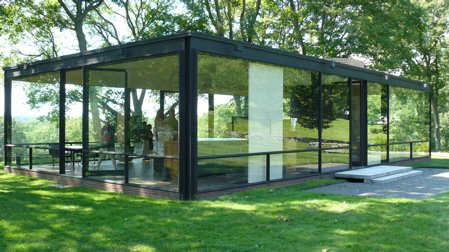 Fast forward a few years and we got married at a museum – the Webb-Deane-Stevens Museum in Old Wethersfield – before I ever thought I’d become a museum blogger. By the way, the Webb House and the Deane house are also both NHL’s. And we were wed before I’d even ever really visited more than a couple CT museums. (Hey, it was pretty cheap, nearby, outdoor/indoor, and pretty…) 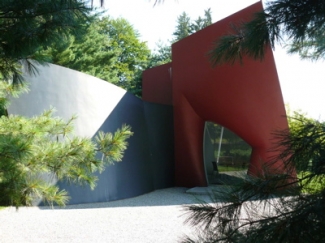 Fast forward to 2009 and we finally got to visit the Glass House property during a long and excellent tour (CTMQ Visit here). Over the years, Hoang has taught me a lot about modern architecture (She went to school for it) and I gained an appreciation for it. In fact, I’ve come to drool over the best of it, and we recently came *this close* to buying a really cool modern in West Hartford. (Hoang is still upset about that.)

Technically speaking, the Glass House is a “district” rather than just a house. That’s because there are actually 16 very different and significant buildings, structures and objects over Johnson’s 47 acres. 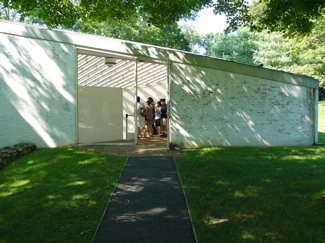 The centerpiece of the estate is the Glass House and its associated brick Guest House, both built in 1949 to serve as Johnson’s weekend residence. Sited on the edge of the bluff, the Glass House is a simple rectangular prism, 32 feet by 56 feet in plan, with a height of 10.5 feet. The house’s walls consist entirely of 18-feet-wide floor-to-ceiling plate-glass sheets secured between black-painted steel piers. Stock H-beams anchored the glass with angle brackets. An off-center cylindrical mass of brick, which has a fireplace on one side and the entrance to the bathroom inside the cylinder on the other, protrudes through the top of the flat roof. The foundation is a brick platform with a slab for frost footing.

My wife helped write that! The NHL form goes on, but I wanted to highlight my favorite part: With ventilation from all four sides the whole house is one room and cooking odors disappear almost immediately. Six spotlights above provide light, and a rubber mat on the floor behind the counter simplifies the mopping-up activities.

I don’t know why, but that made me chuckle. 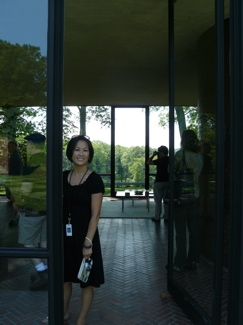 I wanted to point out a couple of the other structures on the property. Like the pond pavilion: In 1962, Johnson built his Pavilion, a precast concrete construction of open colonnades that seems to float in the small pond near the western edge of the property. It was assembled in one day. Measuring about 32 feet square overall, the Pavilion’s symmetrical four-armed plan is placed over a system of water channels and a pool that originally contained small water jets. Spouts in the curbing around the roof empty into the pool, creating waterfalls when it rains. Although from a distance the Pavilion appears to be a full-size building, its scale, said to have been based on the dwarfs quarters in the Ducal Palace at Mantua, is about two-thirds of what would be comfortable for a person of normal stature.

There’s also the art gallery built into the side of a hill, the sun-filled sculpture gallery, the Gehry-inspired Visitor’s Center that never became operational (the neighbors didn’t want the traffic) and several other artistic buildings and structures that span 50 years of Johnson’s visionary ideas.

This was his playground. Here in New Canaan, Johnson experimented and had a grand old time designing and building somewhat silly buildings – but all had a purpose and far, far more intellect than some people understand. 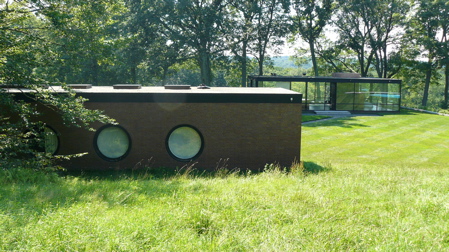 I’m very happy the Glass House has been recognized as a National Historic Landmark. I’m happier still we can now visit and come to understand what it’s all about. I suggest you do the same.