Not the Woodcock You Thought
Wilton/Ridgefield (Google Maps location)
June 27, 2017

I just spent too much time comparing maps to determine if the actual Woodcock Nature Center building sits in Wilton or Ridgefield. It is in Wilton for those of you playing along, but the Center’s property and trails do extend up into Ridgefield. 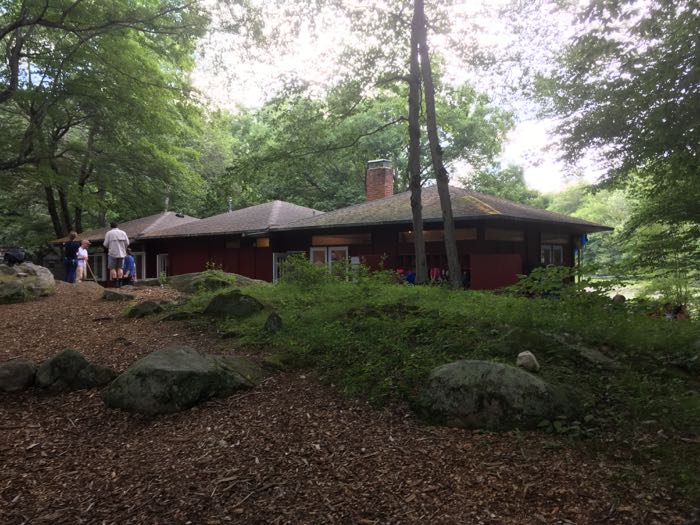 I mention this mostly because someone recently gave me grief for not including Wickham Park on my East Hartford Town Guide, even though 90% of the park, including the nature center, gardens, and trails are all in Manchester. So, to the person who cares… yes, some of Woodcock’s land is in Ridgefield.

But it doesn’t really matter because the Woodcock Nature Center is located on a large tract of land owned by the State of Connecticut. The land was acquired by the State over a period of about 15 years for the purpose of flood control following the devastating effects of the 1955 floods. (A dam now protects the area. Everyone in Wilton is safe. I mean… it’s Wilton after all.) 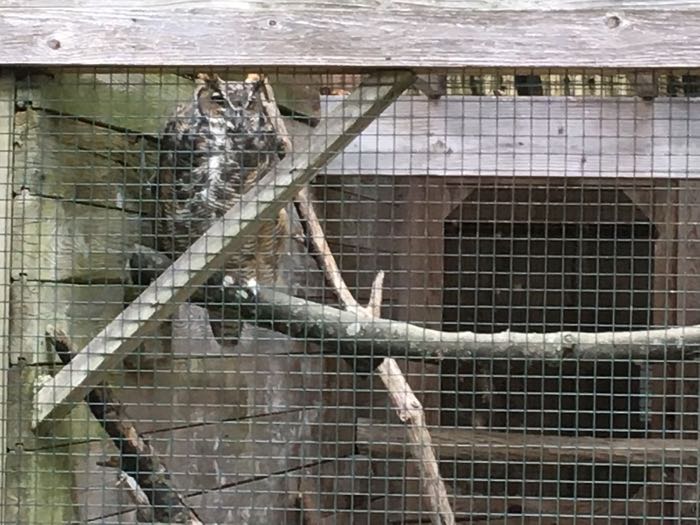 This page is merely about the Nature Center itself, and not the trails on the property. That’s just how I do things around here, whether it makes sense or not. (Also, I had Damian with me in the midst of a long day out in southwestern Connecticut, and there was just no way he was going on a walk in the woods at this point. I’ll be back here someday to hike.) 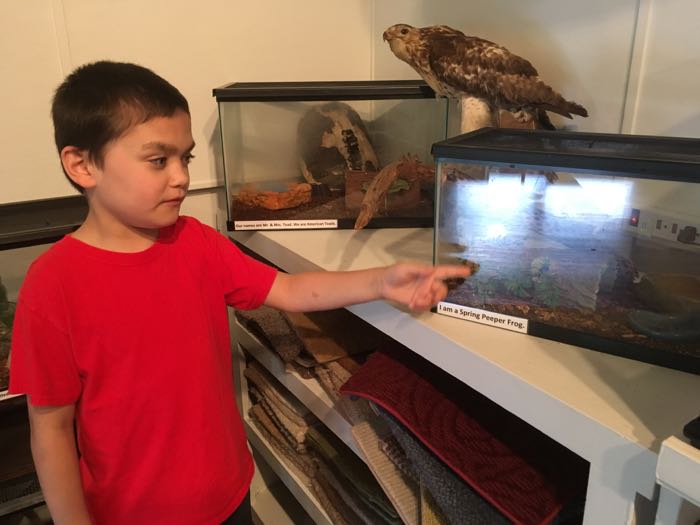 I’m about to blow your mind. Are you sitting down? Good.

We all assume, of course, the Woodcock Nature Center is named after the woodcock. Woodcocks are totally dorky looking birds and their habitat includes Easton: 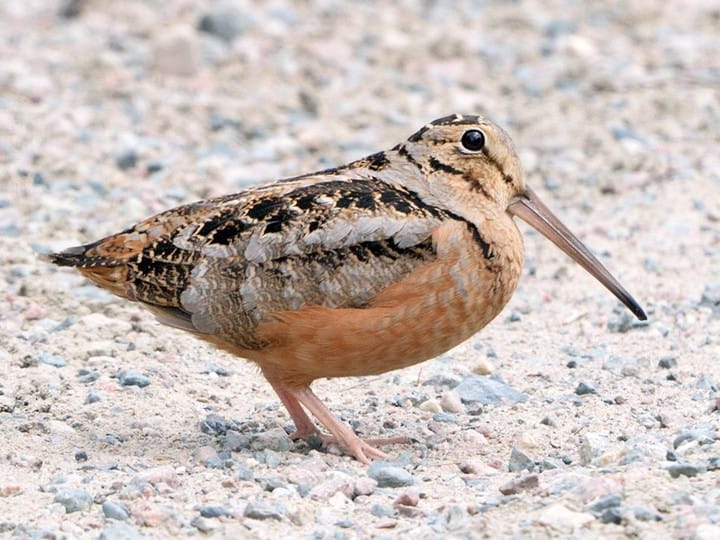 Anyway, we’ve all assumed wrong. In 1969, Ridgefield First Selectman J. Mortimer Woodcock arranged to lease 140 acres of the property along Spectacle Creek in Wilton and Ridgefield (130 acres in Wilton) for a nature center, and in 1972 the Woodcock Nature Center was opened.

Are you KIDDING ME? J. Mortimer Woodcock? I can’t believe that. Seriously.

The Preserve is a haven for aquatic life and a remarkable variety of birds. Along our trails you’ll find historic stone walls and stands of old maple, beech, oak and hickory trees. Boardwalks allow rare access through part of the rich, abundant wetlands nestled in the woods. In these graceful surroundings, young and old can experience the rich, renewing world of nature. 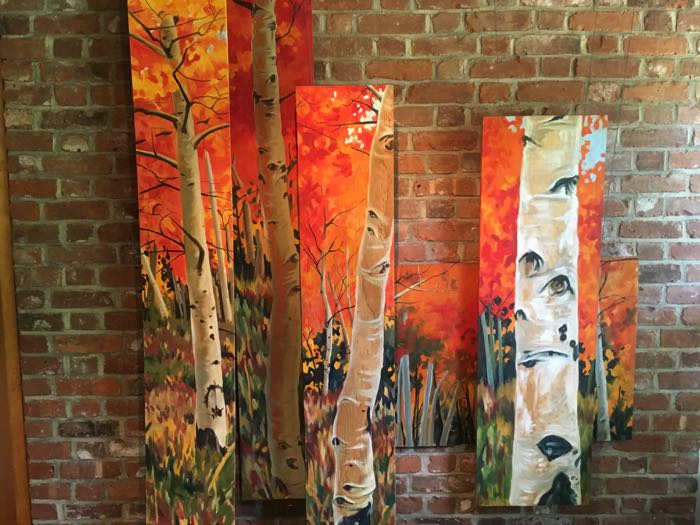 “The Preserve is a haven for aquatic life and a remarkable variety of birds.” Even woodcocks. Okay, I’ll let it go. I arrived here with Damian and got kind of caught up in a summer camp transition. Kids were coming and going all over the place, with buses and mom’s picking up in their BMW SUV’s and whatnot.

So we avoided the main building at first and walked over to the outdoor aviary. I think these birds might live in Ridgefield and the main Center is in Wilton. Regardless, Woodcock cares for several non-releasable birds of prey here. The usual suspects like a Great Horned Owl, a Barred Owl, red-tailed hawk… Not to diminish how awesome owls and raptors are. I will always enjoy seeing them. 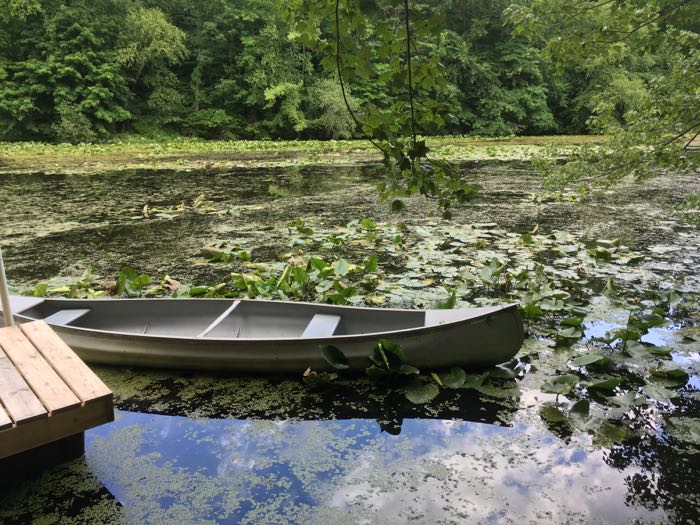 And their homes here are quite nice and I can tell you that the great horned owl was named Hooty.

As the kids were clearing out, we checked out the Woodcock Teaching Pavilion. This is definitely in Ridgefield and not Wilton. You know you want to see it, so here it is: 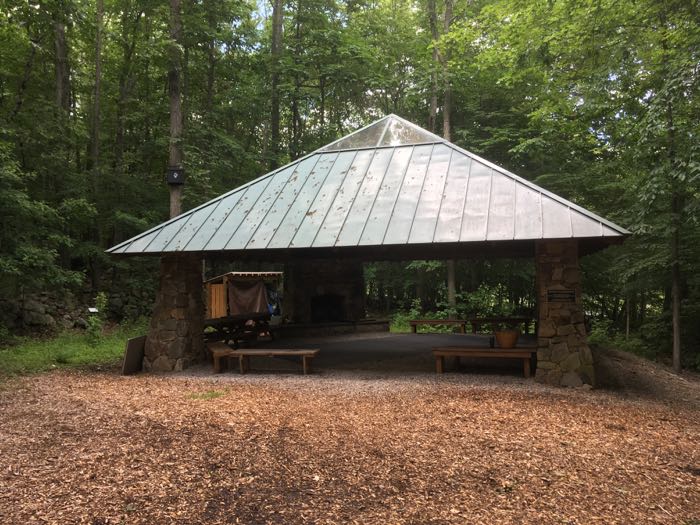 We could now enter the main building without too many people milling about, so we went for it. The nature center houses around 30 reptiles and amphibians here. This isn’t the largest nature center collection of animals, but it’s clean and those animals they do have are generally pretty cool.

I just couldn’t get past the names. It’s like my own sons named some of these… 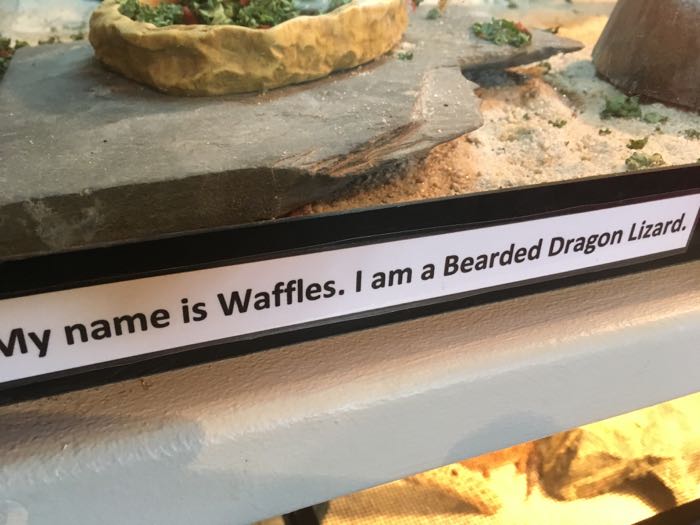 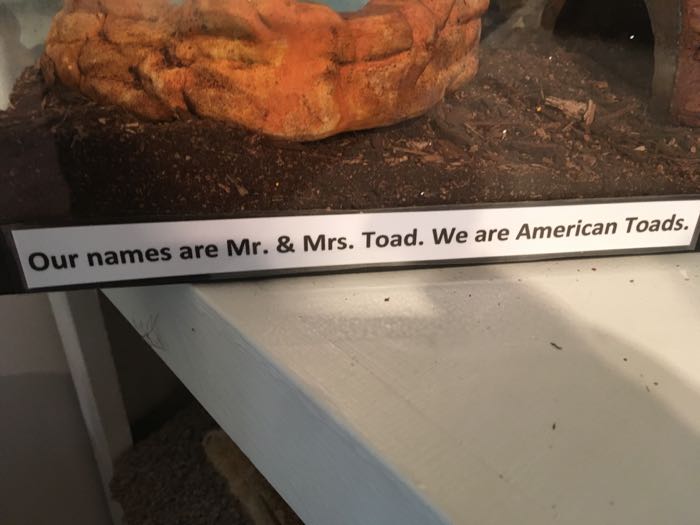 And Damian, who isn’t the most imaginative child, would totally name toads “Toad.”

We wandered around looking at each reptile and amphibian. There are the usual stuffed birds and New England mammals here as well. As with a lot of these smaller nature centers, the live animals are just a small reason to go. In other words, I’m not encouraging my fellow West Hartford residents to pack their kids up to drive to the Wilton/Ridgefield line to find the Woodcock Nature Center.

Let me handle that. 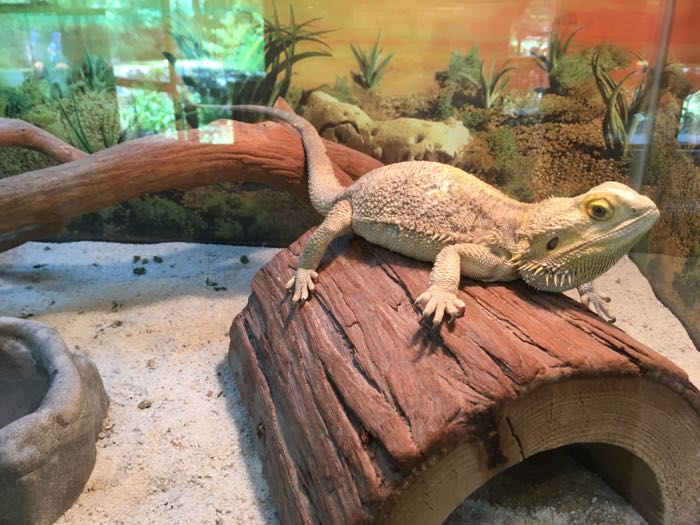 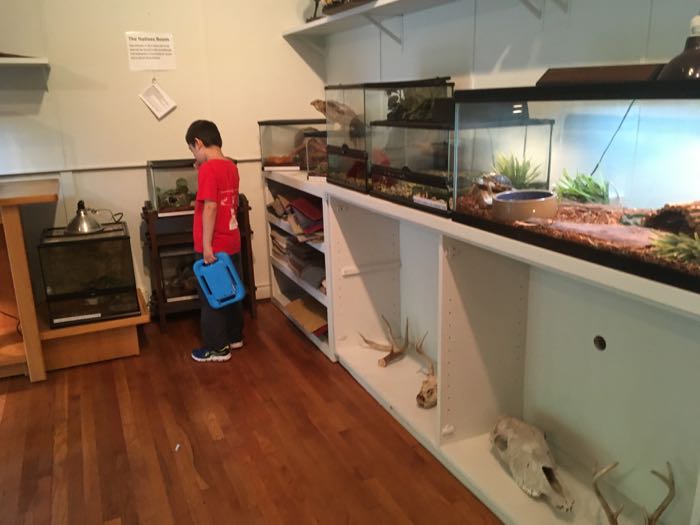 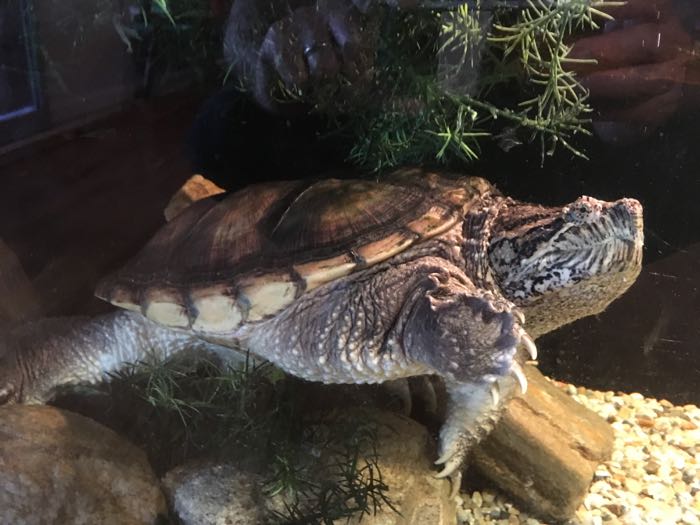 We went out the back door to look at the lack and found Sweeney’s Rock. This is a chunk of granite near the lake named in honor of a guy named Sweeney who served at Woodcock’s treasurer and president for many years. It’s not the most impressive rock. 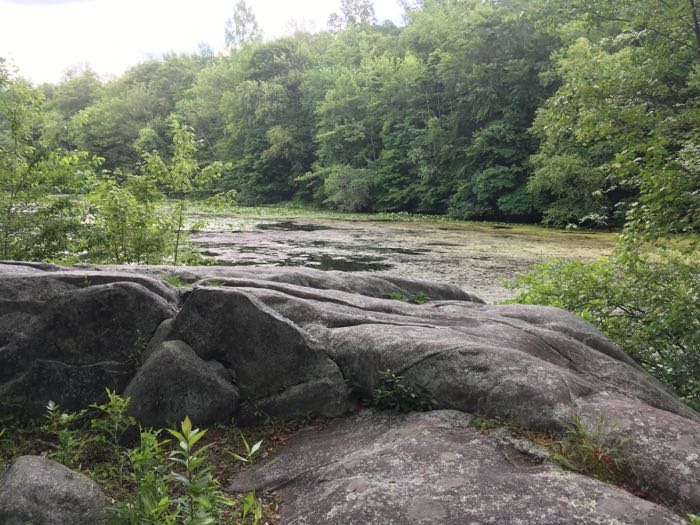 After the lake, Damian and I circled back through the center, out the front, and to the car. The funny thing (to me) about this place is that I’d driven by it several times before finally stopping in with Damian. I guess that’s not that funny.

As I wrote, I’ll be back to hike the trails here someday. I can see you on the edge of your seats! 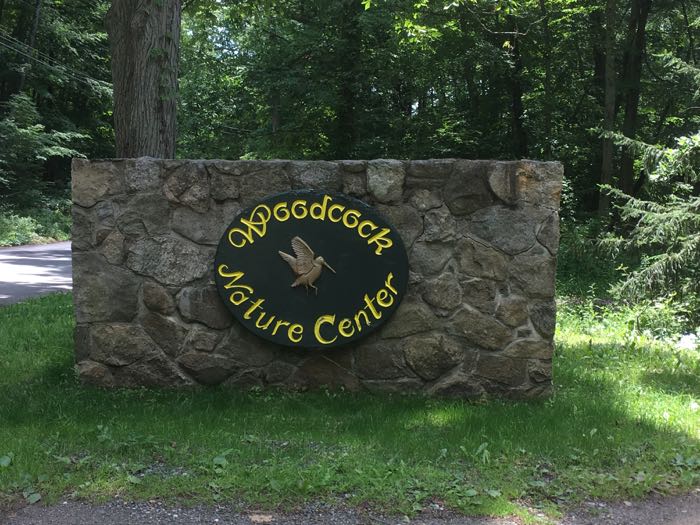