As I make my way through everything there is to do in Connecticut, I am faced with the fact that there are often things in towns that don’t warrant their own CTMQ page but should still be highlighted. This is Harwinton: Various and Sundry.

Harwinton was the eighth Connecticut town I’ve “completed.” I try to always remember to use scare quotes, because rarely is a town truly complete. For instance, there’s always the chance that the town will get a brewery someday, because every town gets a brewery eventually. And who knows what else. 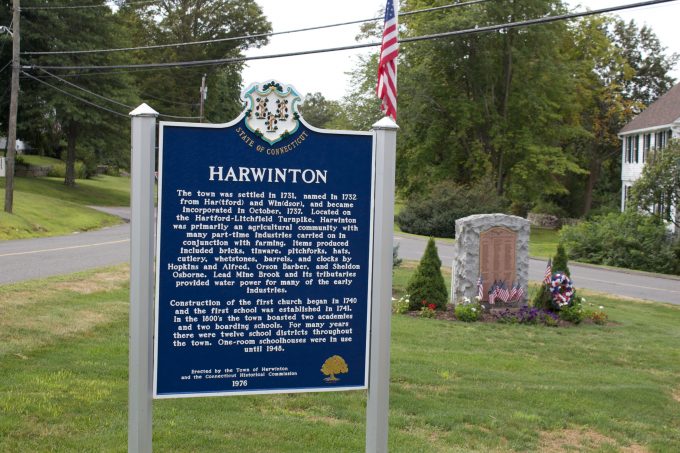 Of course you aren’t all ga-ga over Harwinton, but why not? After all, not every town can boast in its 2017 promotional brochure (link gone) that:

Harwinton’s Recreation Area, at 122 Litchfield Road, has been ranked as one of the best hiking and swimming areas for dogs in the state.

No source on that claim, but I’ve no reason to doubt it. I’ve also no reason to think many other towns would print such a claim in their promotional brochures.

But there is one thing Harwinton seems especially proud of: its name. The more you read about the town on the town’s various sites and stuff, the more you’ll see the claim that Harwinton, Connecticut is the only place in the world named Harwinton.

I find this particularly odd because I would guess several Connecticut towns can make this claim. I’ll throw out Old Lyme for one. Anyway, let’s learn about the name… because everyone gets its derivation wrong.

This info comes from the town’s historical society.

Back in the 1680s when the Colony of Connecticut was worried that its charter might be taken away by the British government, and that the “Western Lands” (now most of Litchfield County) might be lost, the entire northwest corner of Connecticut was given to the Hartford and Windsor “Plantations” for safekeeping. When the threat had finally passed and the General Assembly asked to have the land back, Hartford and Windsor refused! They claimed ownership because the land had been given to them.

[You can read the full entry at the link just above] 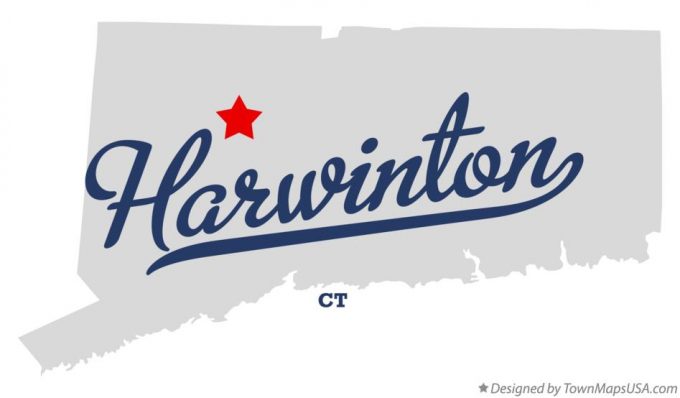 By agreement Hartford became sole owner of “East Harwinton” and Windsor the owner of the “West Harwinton.” The common boundary for the two half townships was a reserved straight North and South ten rod (165′) wide “highway.” It ran down the middle of the town and would contain the theoretical North and South Roads, running border to border.

When the Town’s settlement began in 1732, the two halves were put back together in anticipation of eventually being declared a “Township” by a vote of the Colonial Assembly. During 1737 this approval was finally given by that legislative body and the first Town Meeting was held. The name of the new town-to-be must easily have fallen into place. The more than thirty square mile area known to be Hartford and Windsor’s town (Har-Win-Ton) logically became “Harwinton,” “ton” being old English for “town” as used in the town names of Canton, Burlington, Farmington, Stonington, Newington and other municipalities.

Okay, so now we know where the name came from. But why can’t anyone pronounce it correctly?! I would guess 80% of the time I hear the town mentioned, it’s “HarwINGton.” As the same essay on the town’s name says:

One of the most unsettling things that native Harwintonians hear is having the town referred to as “Harwington”. I guess because we are in close proximity to Torrington, people assume we are “Harwington”. We are “HARWINTON” and here is the only location in the world that you will find this unique town name right here in Litchfield County! The best way to get on the good side of our natives is to refer to the town the proper way. That way you will definitely start off on the right foot.

Of course, pure native Harwintonians reserve the right to refer to “our” town, using our best old New England accent as simply “HAR-TEN”

I can’t say I’ve heard the “HAR-TEN” pronunciation, but it wouldn’t surprise me. After all, I married a woman who grew up in “New Brih’in” and I grew up in Delaware near “Philelphia” and “Ballmore.”

My friend Peter Marteka sent me a note the other day from Cornwall and wondered why more towns don’t have sign boxes. I’m sure there are more, but I can only think of Cornwall and Harwinton.

Harwinton’s is at a poorly sighted intersection where I’m sure people crash all the time. If only because they are gawking at the beautiful sign box. 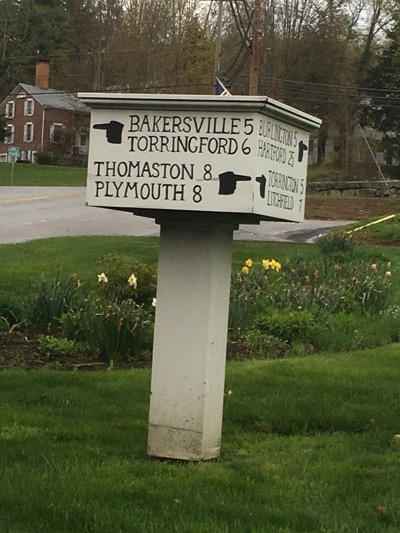 So what’s up with this thing?

This sign box, at least the one that is currently at the intersection of Rt. 4 and South Road and the previous generations of sign-boxes and sign-posts, date all the way back to nearly the arrival of the town’s original proprietors. Originally simply a post, the box design came along much later. It not only provided directions to travelers passing through to the neighboring towns but also provided a means for the town’s government to post legal notices in a centrally located public location. Actually, it was documented that there were a few of these located throughout the town.

Raymond Bentley believed that the style, featuring a large wooden box attached to the top of a four-sided post, might just be the only one of its kind in the State.

I agree that this is probably likely technically true. They should put this on the brochure right under the dog thing. 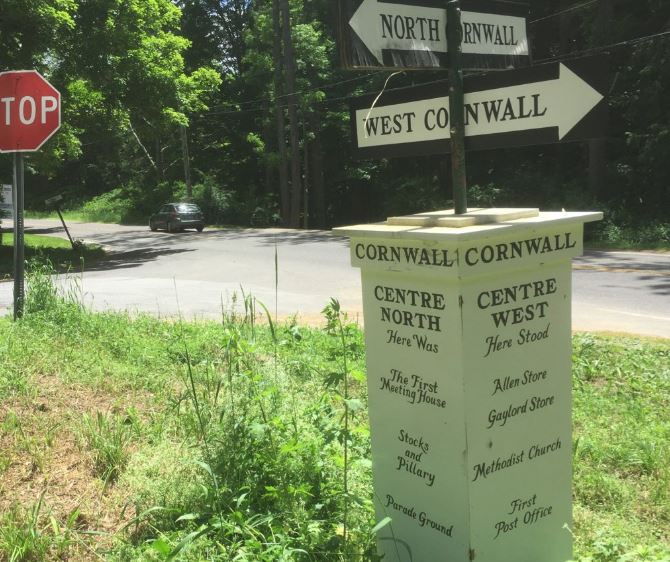 Lewis Smith, during one of his four terms as the town’s probate judge. designed this sign-box sometime between 1844 and 1860. He planned the design so that the legal notices attached to the post would stay somewhat protected from the elements by the overhang of the box.

With no method of modern communications, it was the town’s practice to post legal notices on a number of these boxes throughout the town to let the residents know what legal matters were pending. Even as late as the 1950s, I can remember notices stapled to the post.

The Harwinton Historical Society now maintains the sign-box. In 2006 a new one was constructed replacing the one that a wayward motorcyclist destroyed in 2006. The previous sign-box, installed in 1984, replaced the more modern one constructed by students from the Lewis S Mills Industrial Arts Class, which incorporated metal letters and arrows to point the way.

There I was, winding down after a full morning of Harwinton hiking, exiting the town’s municipal buildings area… when I passed some large stone structures with a bunch of signage. 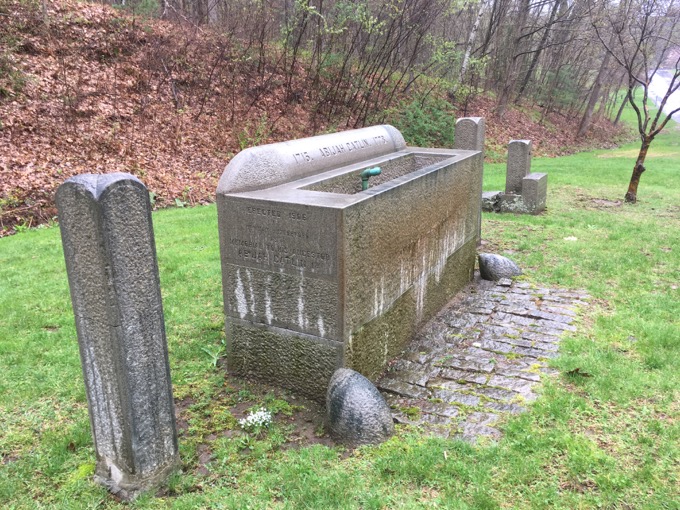 And I’m glad I did. I had never seen one of these things before, let alone a town highlighting it so prominently. I wonder how many people stop to read these signs… in the rain no less.

It is interesting enough to warrant a page on Connecticut History, so I guess I’m not the only person who wanted to learn about it. 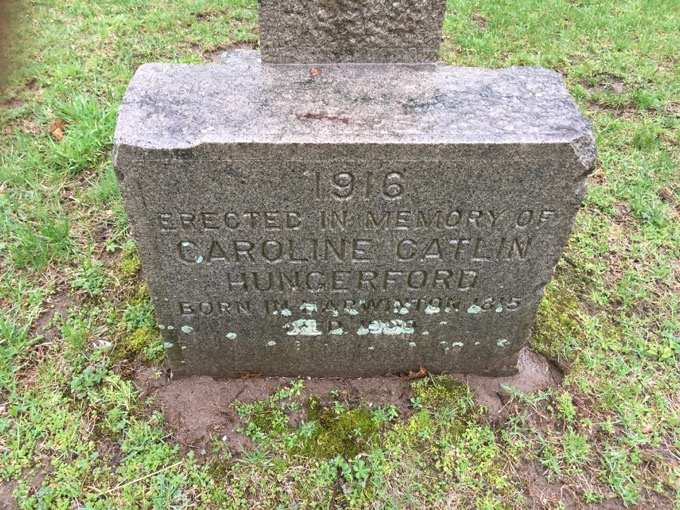 The Harwinton water trough stands as a memorial to the European settlers of this part of town and to the development of the Burlington Road/Harmony Hill Road Historic District area. Harwinton was originally Hartford and Windsor’s Town, a tribute to the original emigrants who settled it.

Among those first European settlers was Major Abijah Catlin (1715-1778), who was given a land grant here in 1738. While there is considerable debate about whether Abijah ever moved to Harwinton, his family maintained homes and businesses in this area for five generations. His son, Abijah Jr., operated a store and an inn at the crossroads of Route 4 and Harmony Hill Road. Here, in 1780, Catlin served refreshments to George Washington, the Marquis de Lafayette, and General Henry Knox. One of his descendants, George Catlin, was educated at the Litchfield Law School and served in the United States Congress.

Somewhat akin to today’s gas stations, water troughs served as essential stops for those with horses and other animals in need of “refueling.” Early versions made of wood were not an uncommon sight in Harwinton. In the early 20th century, descendants of Abijah Catlin Sr. placed a much grander trough, made of granite, along Burlington Road to commemorate their ancestor and serve the community. It utilized a nearby spring and gravity to provide passing horses and oxen with a source of drinking water. It operated until the automobile’s popularity rendered it obsolete and also prompted the town to move it away from the heavily traveled and winding road for safe keeping. It now resides on Bentley Drive. 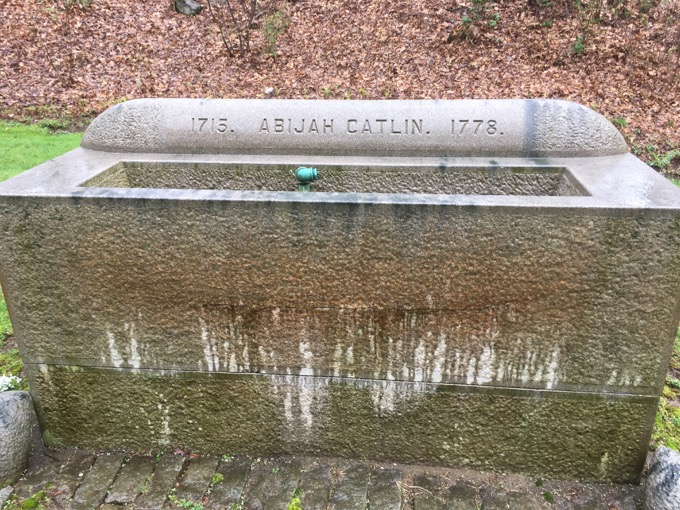 The Tunxis Trail edges into Harwinton near the Burlington border. The white-dot Tunxis mainly follows dirt roads and woods roads here – just west of Tory Den, one of the most notable features on the whole trail.

The white-dot write-up is here, and here’s a bit more about Tory Den from which I lifted the following.

First, a “Tory” was a Loyalist back in colonial days; that is, sell-outs who remained loyal to the British crown. There was a healthy pocket of these “America-before-it-was-called-America Haters” in the Burlington/Harwinton/Bristol area and one of them was Stephen Graves, a Harwinton farmer.

Actually, instead of me telling it, I’ll leave it up to the pros; The Sons of the American Revolution:

I must interject – here is where Graves was actually whipped (over in Harwinton, now along the Tunxis White Dot trail): 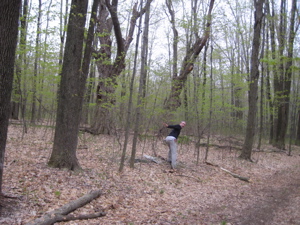 See how I’m whipping myself?

Anyway, back to the story…

When I read this stuff, I can’t help but wonder when it will all begin again with the way it’s going in this country…

Alright, that’s it from Harwinton.