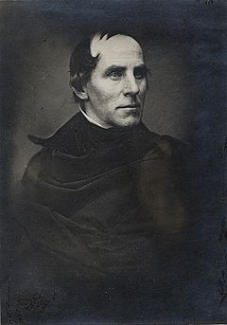 Many mountains in many lands are named for the profile they cut (Sleeping Giant, Indian Head), the contrasting conifers on the summit (Blackhead, Black Dome), their relationship to nearby peaks (Cannonballs, Twin Mountain, Little Jay) – on and on. Thomas Cole Mountain, again like many others, is named for a man. A man with a crazy 19th century combover but who also more-or-less started a mini artistic revolution in the United States.

Not bad for a goofy looking Brit.

But here’s the rub; the irony if you will: Thomas Cole Mountain, named for one of the most influential plein air landscape painters in American history, has no views and really has nothing remarkable about it at all. Heck, it probably was one of the last-named peaks in the Catskills and somewhat thought it would be a nice homage.

And it is! It’s just that for a guy who championed these mountains so well for so long and so publicly, you’d think he’d get a gosh dang view or something. More on Cole the man in a minute. Let’s get Cole the mountain out of the way first. 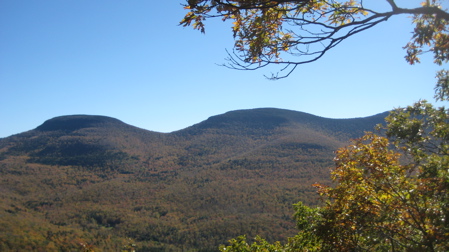 From across the valley, left to right: Blackhead, Black Dome and Thomas Cole behind the leaves

I was spending my morning doing sort of a ‘T’ hike up from the hollow in Maplecrest and bagging Blackhead (CTMQ hike here) and then Black Dome (CTMQ hike here) before tackling Thomas Cole. The day before, when I was 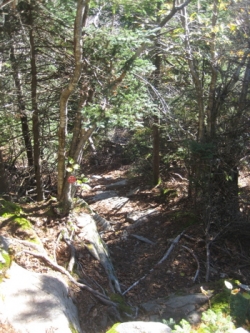 looking across the valley at these three peaks, I actually wondered if Cole was Cole because it was so close to the more obvious summit ot Black Dome. (These peakbagging lists have all sorts of rules about proximity to other peaks and such.)

I didn’t have any such concerns looking across the shallow col between Black Dome and Thomas Cole though; I was quite happy about the short hike with little elevation change. In fact, I never saw a 3500 foot sign, so that tells me the trails dips and climbs less than 440 feet. There were a few steep little sections down the Dome but I don’t really recall any going back up Cole, though I’m sure there were a few.

By the way, I’d been hiking for a few hours now on a perfect fall Saturday and had yet to see another hiker. I was shocked by that to say the least. The day prior, I’d only passed by ONE guy. Crazy. 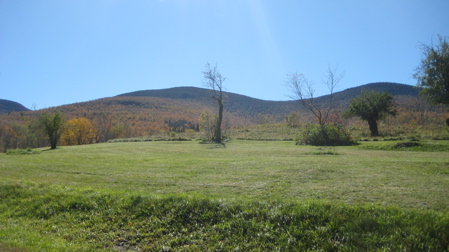 The true top of Cole is somewhat undefined. As I don’t have an altimeter or GPS, all I can do is scout around and hike back and forth along the trail across the summit, which is what I did. I determined that a 1.5 meter boulder just off the trail was the true summit. I couldn’t sort out a good picture of me ON the boulder, so instead my somewhat kooky summit shot is from the boulder.

Many people continue hiking west from here, which offers a few miles of gradual descent to the trailhead. I had to turn tail and head back up and over Black Dome before descending down to my car on Big Hollow Road – another reason I was very happy with the lack of elevation change between the two peaks. I took a longish break at the Black Dome overlook and then positively flew down the mountain to my car. I finally started passing fellow hikers on my descent, many of which did not look as though they would make it half way up these mountains. 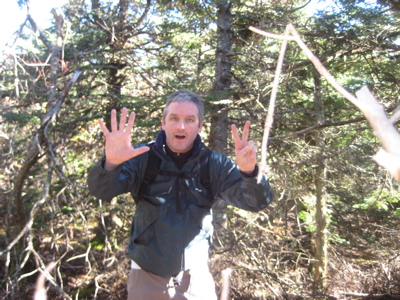 On a normal CTMQ museum post I’d write a whole bunch about Thomas Cole – but not here. You can follow the links to learn more about him. He’s interesting to me, though, because of his involvement in beginning The Hudson River School, which had major ties to Connecticut. The Wadsworth Athenaeum has the biggest Cole collection in the world – mostly because Daniel Wadsworth patronized Cole. Some good stuff below.