Preaching the Gospel of Beer
5 Churches Brewing, New Britain
May 2018

I have written many times that I’m an unapologetic fan of New Britain. I know that this surprises many people, and I’m always happy to explain. First and foremost, I spent a couple years there when I was dating my (now) wife who grew up in the city. 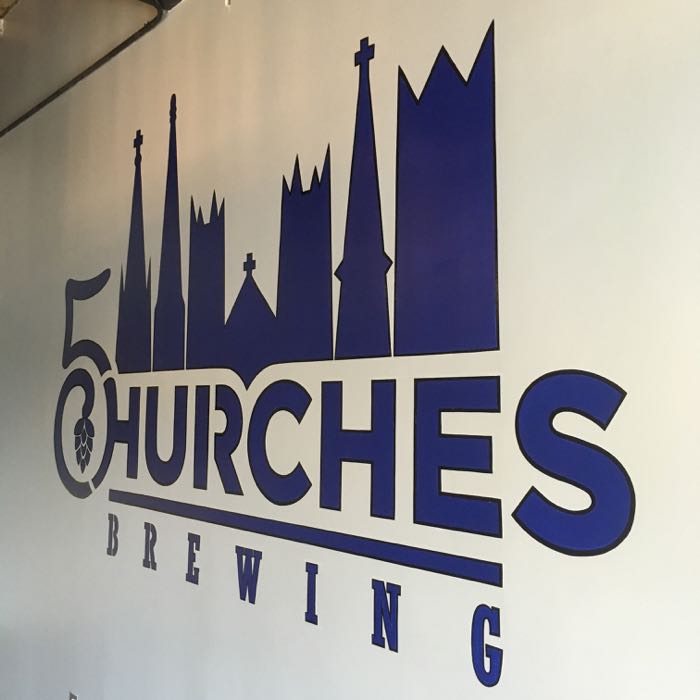 I still spend a lot of time there at my in-laws’ house. The city, in essence, took my in-laws in in 1975 when they arrived in America as refugees. Not Greenwich, not West Hartford… but New Britain. My wife and her four siblings matriculated through its hardscrabble public schools and all have found success in later careers. 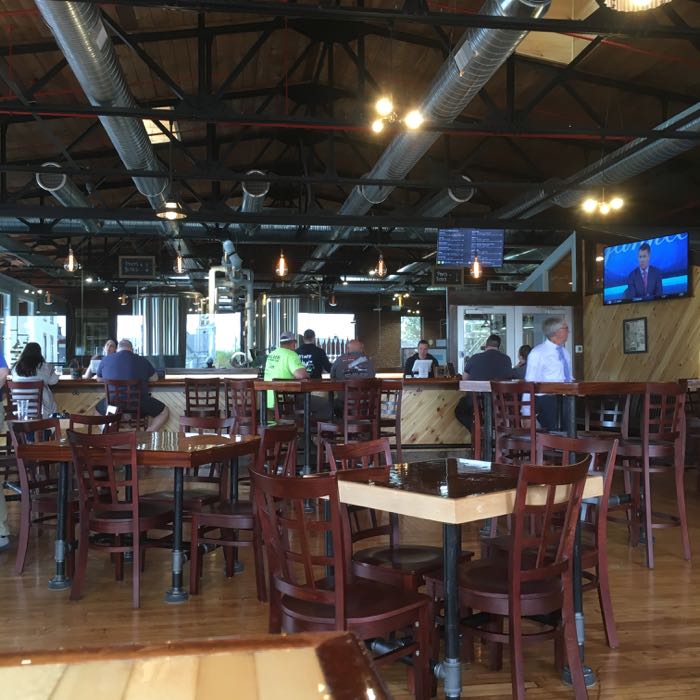 I love what the city has done to celebrate its unique cultural traits: Little Poland is one of the most interesting city blocks in the state. The New Britain Art Museum is one of the best around, and you have to feel for a town that has recently had its successful AA baseball team stolen from them. Not to mention having to survive the massive downscaling of Stanley Tools, the pride of the city. 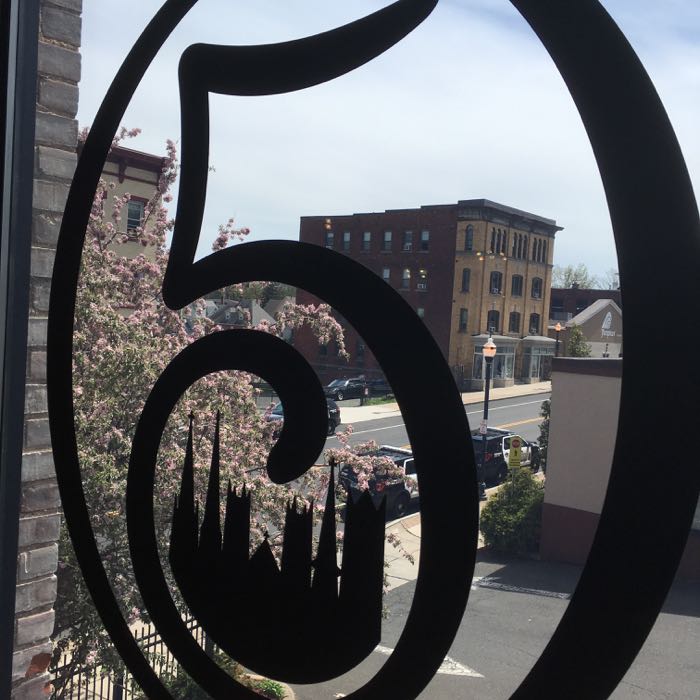 And then there’s Arch Street. Beleaguered Arch Street. Home to poverty and drugs. But that’s all gone now But perhaps that’s slowing changing now with the infusion of places like 5 Churches.

Back in the day… 2000-2001… Hoang and I used to walk, yes walk, from her place a half mile or so away to hit up Club Lido for last call. Club Lido is a dive bar with carpeting. Or at least it used to be carpeted. That used to bother the heck out of me, but for some reason drinking at 1:30 AM with a bunch of crackheads didn’t. 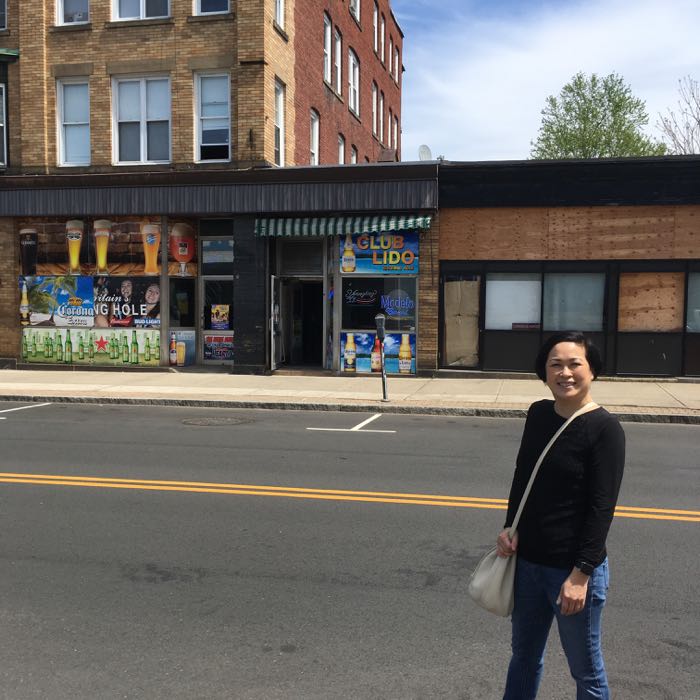 5 Churches is located directly across Arch Street from Club Lido – which is still in business, bless its heart. I wonder how many suburban interlopers close down 5 Churches and cross the street for some real New Britain flavor? More should.

Actually, 5 Churches should also be considered “real New Britain.” Two owner/brothers, or at least one of them, owns a transportation company based here… like, right next door “here.” As in Town & Country Transportation. The Lemnotis family has owned and operated small family businesses in New Britain since 1949, and they continue with this brewery. And they opted to put themselves right downtown on Arch Street; one of the few true downtown breweries in the state. 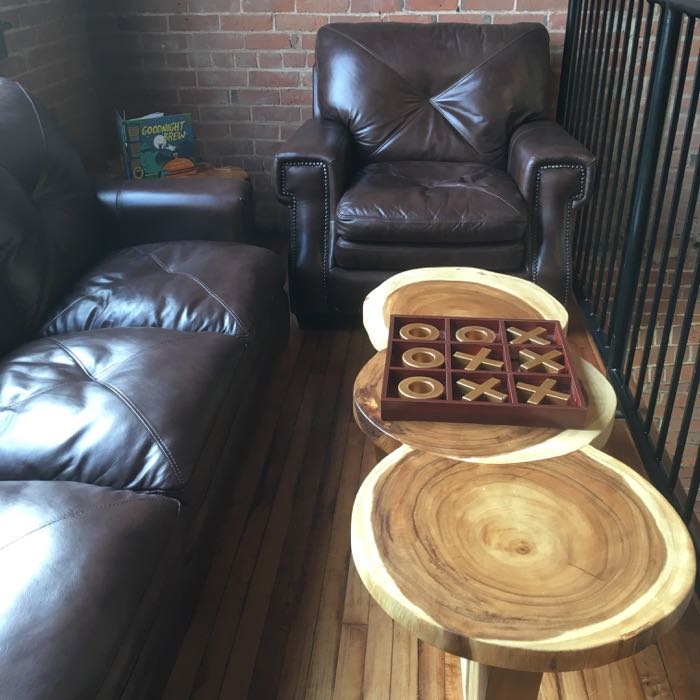 Based on its location, Hoang was an instant fan. That New Britski pride I mentioned burst forth as she chatted up the door guy. Yes, there’s a door guy. Being one of the only true downtown breweries in the state, I guess they need one. “I grew up here! This is great,” she effused.

Such a nice, positive change for the area. It just felt… right. Nothing could spoil the moment. Arch Street is changing. We peered out the window together to take it all in, looked across the street at the apartments, and – 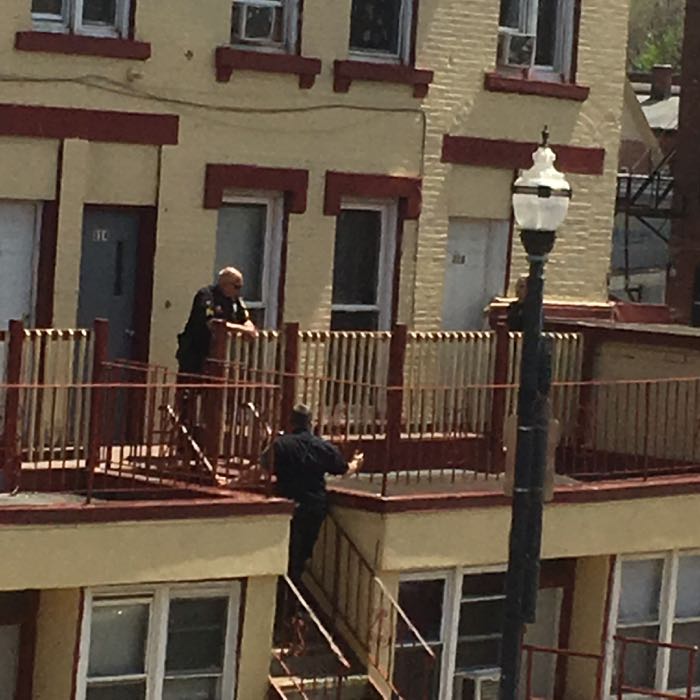 Goshdarnit, New Britain. Why you gotta be so New Britain? Yeah, so, there were a bunch of cops crawling all over the place looking for some bad guy. (They never found him according to our sleuthing.) Anyway…

The airy space is quite nice and very well put-together. It feels… classy. Just like all the businesses here were 60 years ago when the town was a legitimate hub. We ordered a brick oven pizza and giant pretzel of some sort. 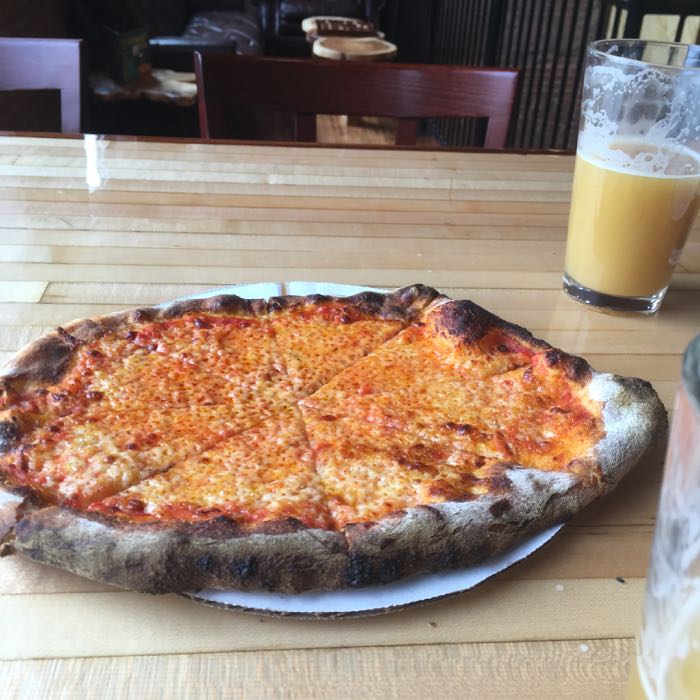 Perhaps it was the fact that we had an hour alone, unencumbered by our sons, but man, we were enjoying ourselves. The service was attentive and friendly. The vibe, even early in the day, was cool and comfortable. I was digging this place.

As we waited for the food, Hoang noted that the logo, a 5 with downtown New Bri’in’s five churches in silhouette, was really cool. I remembered an art project she did for photography class that centered on her hometown’s churches. Oh, yes, here it is. It was framed and hanging in our bedroom: 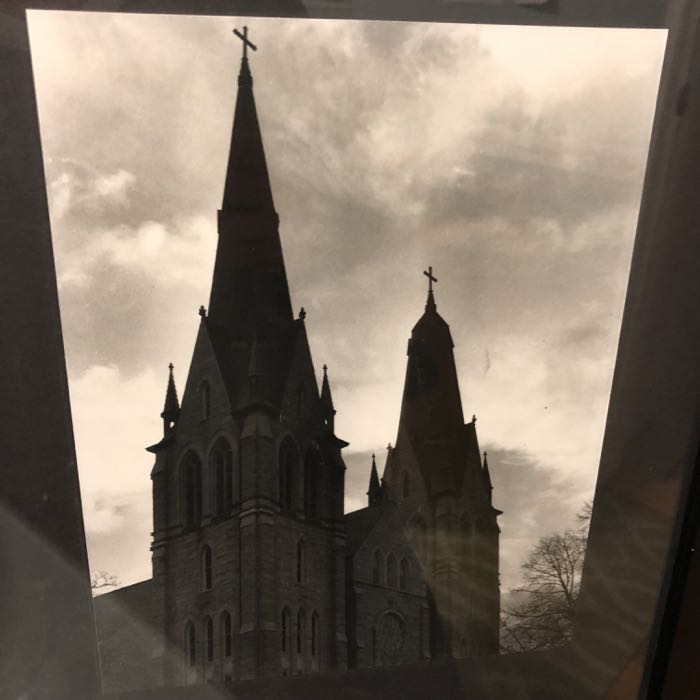 Sorry for the glare. That’s right, we have framed photos of New Britain churches in our bedroom. What of it?

The idea here is that you can see the city’s 5 churches from the brewery. Neat. And I’d love to bore you with more church facts, but holy crap this pizza is good. Like, really, really good. I had heard it was good, but now I know it’s good. Well done, 5 Churches!

The pretzel was pretty good, but the pizza here was the star of the food show. 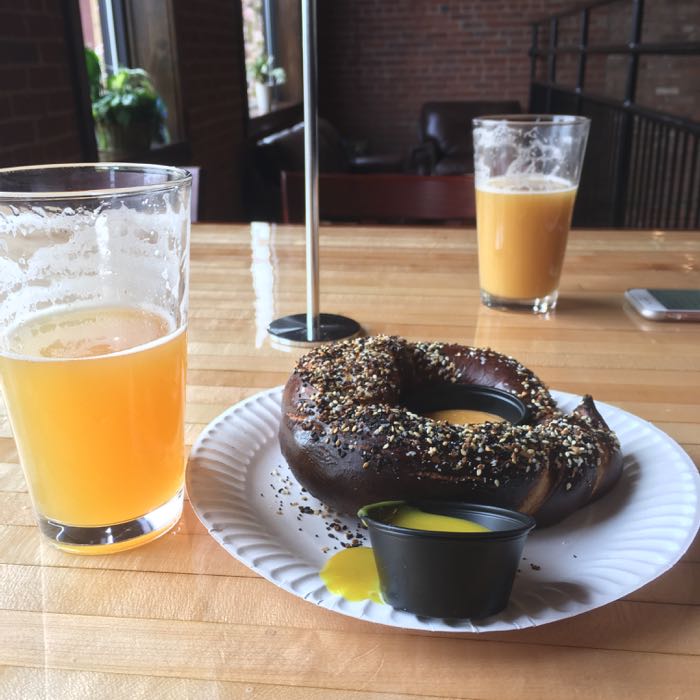 At this point you’re rightly wondering about the beer. It’s good. The head brewer, Austin Japs, has a strong pedigree; he cut his teeth at Hooker like so many in Connecticut and then getting hired on at Steady Habit to work with Jon Peterson. Until Jon Peterson was disappeared by the guy who bought Steady Habit which Austin wasn’t exactly expecting, so he got the flipflap out of there lickety split and landed at NEBCO. Then wound up here, in New Britain, running the show.

The life of the non-brewery owning brewer is hard. Despite brewing at 4 breweries in… two years? Maybe a little less? Austin is still young and from what I’ve heard, is “all-in” and constantly learning the craft to become better. Good. That’s what you need, and that’s what even the top brewers do. 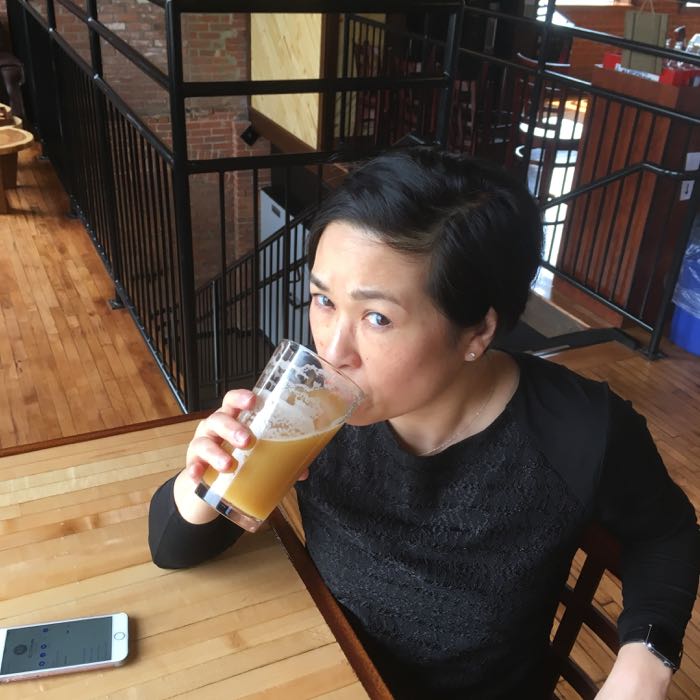 The NEIPA here probably appeals to many, but I’m just so tired of the style. Murky and viscous with a wholly unappealing appearance, it wasn’t for me. The lighter ales were on point though, and I very much enjoyed them. In fact, they were nearly perfect.

I also enjoy the beer name Pew-Pew – it speaks to the churches and it speaks to gamer nerds who can be heard “pew-pewing” each other while collecting Pokemon balls or whatever they do. Note: Massive crossover in the gamer and craft beer worlds. 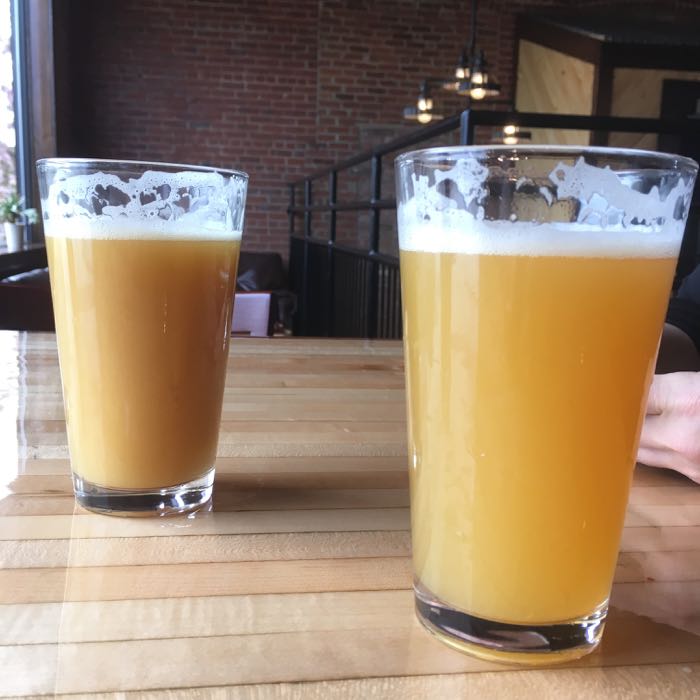 5 Churches does a line of gluten free beers for some reason and the pineapple one I tried was awful. I hated it; they call this line of fruit sodas with scant alcohol “Weerder” and … Hoang liked it. Avery’s soda has been a New Britain institution for decades. This tasted like something they’d make. 5 Churches does a guava one I think, which is perhaps the worst sounding “beer” (or beer) made in the state.

BUT, there’s a market for these things. Clearly, I’m married to someone in the market. I think you can be considered a designated driver and still drink 5 pints of this stuff. Look, props to the brewery for making these Weerders (the guava one has a solid 4 caps on Untappd) and I hope it helps them succeed. And props for recognizing that they are “weerd”. I’m glad I bought a pint and tried it… at least I have new found sympathy for the truly gluten-intolerant.

They live a hard life, man.

As for me, I just wanted simple pale ales to enjoy with my beautiful wife while she kicked back and soaked in the resurgence of the soon to be once again proud downtown area of Hard Hittin. 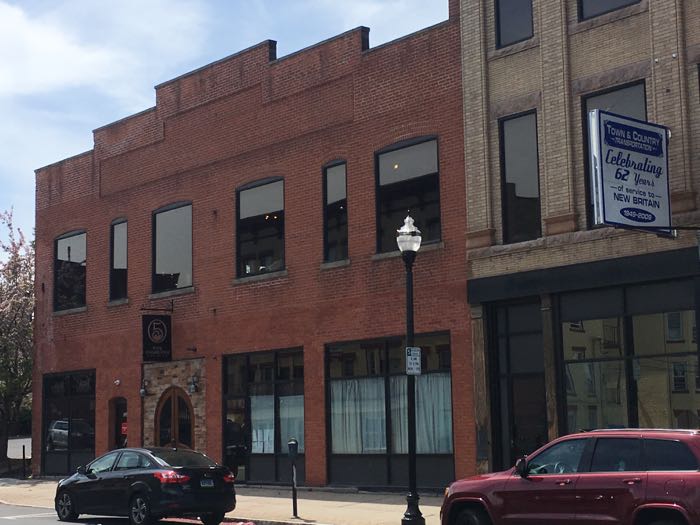