How Sweet It Is
Deborah Ann’s Sweet Shoppe, Ridgefield
August 27, 2012

You know how when you look at pictures of your kids when they were young and you get all wistful and misty eyed because they were just so cute and perfect and fun? But that if your spouse happens by and reminds you of the true situation surrounding the cute pictures, it almost always ruins the moment? 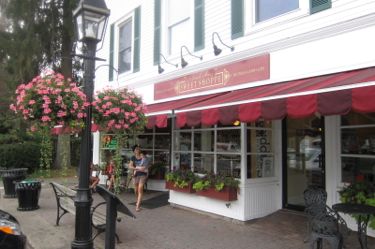 The day we went to Deborah Anne’s in Ridgefield was a long day. We had spent a week at the beach in Delaware and visiting my family and now we were on our way home in Connecticut. With the boys sleeping, I took a rather long detour over to Ridgefield. Those of you familiar with Ridgefield know that there is no easy way to get out there. In fact, it’s a complete pain in the butt to get through Wilton – though if you ever do it, be sure to make a stop by Wave Hill Bread, arguably the best bread bakery in the state. (Our visit here.) 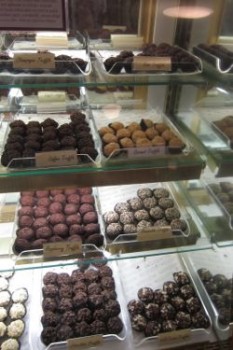 But lo! Deborah Ann’s is the promised land! It’s worth it to get out there!

That’s what I told Hoang anyway. As the boys awoke due to the winding roads and stoplights once in Ridgefield, they were cranky and whiney. This, in turn, made Hoang cranky. Eh, nothing a little chocolate and ice cream can’t cure, right?

(Deborah Ann’s makes its own ice cream as well as chocolates. So yes, there’s another page on CTMQ about their ice cream, here.)

We all got some (excellent) ice cream first and while we eat that, let’s turn to the CT Chocolate Trail to read what they have to say about this joint:

What happens when you get two Yale Law School graduates together in a room? Chocolate, of course! Tired of the corporate legal world in New York City, this sweet couple now serves a variety of homemade chocolates, ice cream and an array of candies to guests. From humble beginnings of just a few types of chocolates, they now produce 70 varieties, including chocolate-covered pretzels, granola and marshmallow caramel. The rear of the store, which was originally part of a bank, has 1,300 square feet of open kitchen, so customers can observe truffles being hand-rolled. 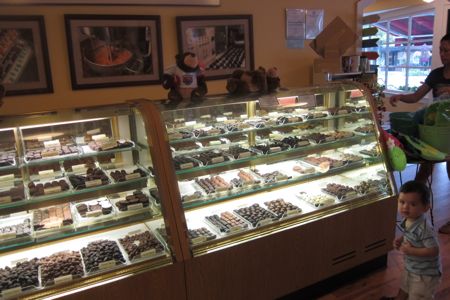 Look at Calvin in the bottom right here. Cracks me up.

That Yale part makes no sense, of course, but who cares. Calvin was a punk while eating his ice cream because apparently it’s a “thing” for 16-month olds to do EVERYTHING themselves, even when that thing is impossible. Like scooping his own ice cream with a flimsy plastic spoon.

Anyway, after the ice cream we moved over to the chocolate shop. It’s a large space (much, much larger than almost every other one on the Chocolate Trail) and includes a random little toy store type area, the glass cases full of their chocolates and then a large back room with non-Deborah Ann treats. They sell tons of classic candies here. 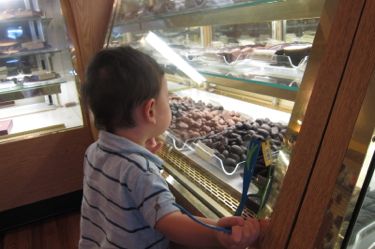 In fact, they make and sell something like 75 different bonbons, plus all sorts of truffles and barks and fudges and whatnot. There is a kitchen in the back where we saw chocolate being made, but I’ve also read that they have a plant in Brookfield as well. Doesn’t Bridgewater Chocolate make their treats in Brookfield too? Is Brookfield the chocolate capitol of Connecticut? 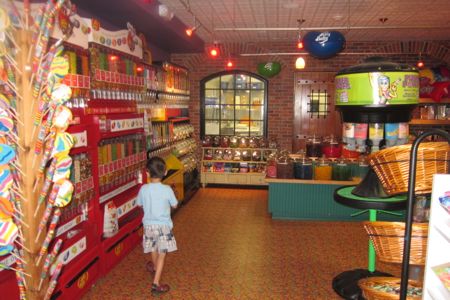 The boys had a great time here, trying to break various toys and doing their best to smear their faces and ice cream hands on the glass chocolate cases. And Hoang had a good time here as well, picking and choosing several types of bonbons and truffles to ease her transition back into the real Connecticut world of work and stress and stuff.

Deborah Ann’s is good for that, even if it’s a pain the butt to get to. 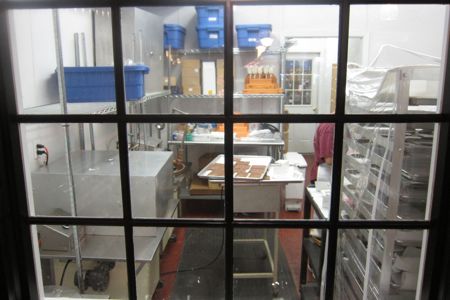 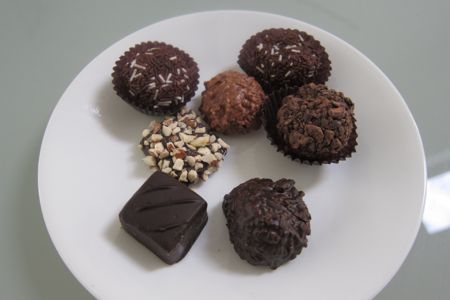 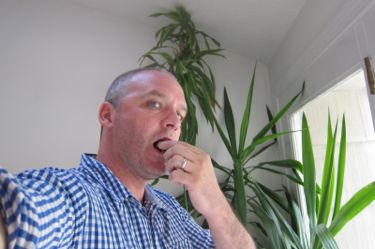