Update: Meigs Point has a brand new building, so a revisit is in order!

If you go to Hammonasset Beach just once a year, please visit this excellent nature center. If you go several times a year as we used to do, please make it a point to visit at least once. It really is one of the better nature center museums I’ve seen thus far in the state. Plus, it has the beach front location allowing for some different-than-the-usual flora and fauna. 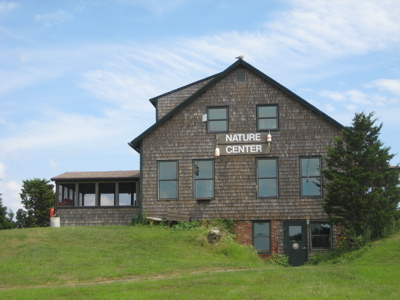 Hammonasset Beach is, of course, Connecticut’s largest beach and offers much more than melanoma. The Meigs Point Nature Center is one such thing and it’s great. You want to know what else is great? The CT DEP’s website explaining the geology of the Meigs Point area. It’s pretty impressive when you realize there are only a few rocks in the whole park and yet, the DEP was able to write a good deal about those few rocks. 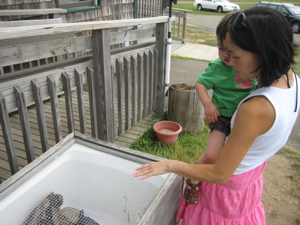 But we had Damian with us and the only interest he has in rocks is throwing them into creeks. So we went straight inside to the Nature Center. It was surprisingly crowded – both with visitors and with animals! 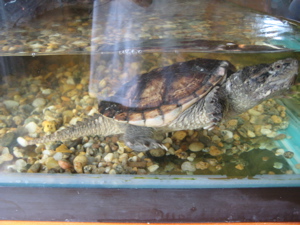 Meigs Point Nature Center is an exciting and vital environmental learning center open to all ages at Hammonasset Beach State Park, one of the most beautiful sites within the Connecticut State Park system. Many of the programs at the Nature Center are funded through donations from the Friends of Hammonasset.

The Nature Center is host to a variety of native animals, including: turtles, snakes, amphibians, crabs and fish. Most of the animals at the Nature Center are non-releasable because of previous injuries or for other reasons, and are very well cared for.

In season, there is a Touch Tank that allows some of the smaller wonders of the sea to be brought inside for up-close viewing and learning. The animals in the Touch Tank are rotated in regularly & then back into the Long Island Sound. 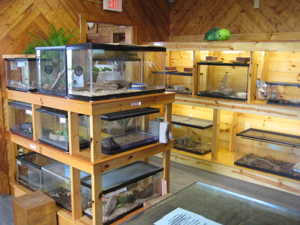 Really? Do people really care about salamanders and mummichogs in captivity? Injured or not? I do note their clause, “or for other reasons” which to me means, “or for other reasons like we caught them and you like seeing them in tanks so that’s how it goes.” And I’m glad; for there are a LOT of animals here.

Outside, there are a couple little nature trails and a butterfly garden. There is also something called a “Friendship Pond” but since we don’t want Damian to grow up to be a hippie, we steered clear of that. 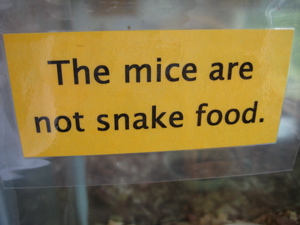 Once inside the main room, we noted the bank of computers and nice flat screen plasma television showing nature films. Consistently, for some reason, nature centers and Audubon Society museums have the best televisions. But aside from that, there were lots of cool displays about the local wildlife. 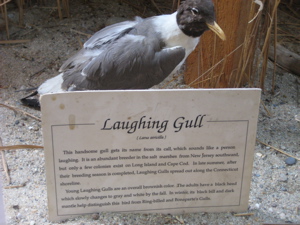 I was rather impressed with the level of the explanations on the accompanying signs. There was a great display discussing the problem of invasive species and what that means for Connecticut’s native plants and animals. There is an entire wall displaying the skulls from potential park denizens. Tides are explained and there was a wall with a wave-action-beach-creation display.

There is also a lot here regarding all the local bird species, which is something this park is well-known for. In fact, I picked up a handy “Birds of Hammonasset Checklist” and I’m blown away by the variety of birds that one may see here. Loons and grebes and ibises? Kestrels and coots and woodcocks? Oh my! And did you know that whip-poor-wills are in a family of birds called “goatsuckers?” 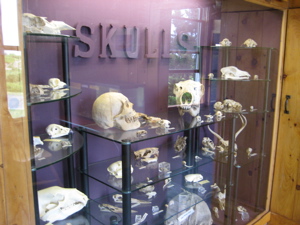 Hardly Chupacabra in shape or size, why is that? Because European farmers in times past thought the birds’ mouths were just the right size to latch onto a goat’s teat and suck out all its milk during the night. The family members’ habit of flying about at dusk and just before daylight added to their mysterious reputation. Cool. 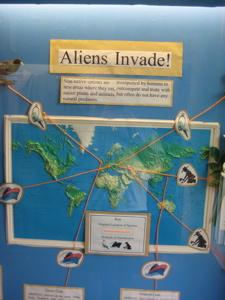 In the adjoining room, one finds a ton of aquariums. They are impressively clean and well-presented. In them, there are many kinds of snakes and turtles and crabs and such. Even Damian was digging it for the most part. 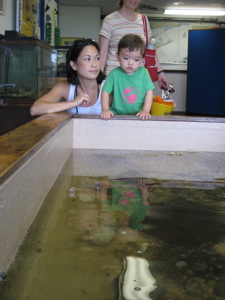 Downstairs is the aforementioned touch tank. It mostly contains the typical clams and starfish and harmless anemones. But Meigs Point ups the ante a bit with an interesting little fish with a habit of popping out of the water to say hello. I don’t know what kind of fish it is, but it looks a lot like an Oyster Cracker to me. But I can’t imagine it really is because they have rather powerful jaws and the thought of my son’s fist being mistaken for an oyster is crazy to me. 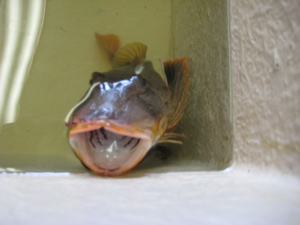 So if anything is lacking at this nature center, it’s a sign telling me what kind of fish that was. But something tells me the immensely brilliant CTMQ readership will weigh in to help me out. (They did; see comments below – it’s a sea robin)

Back upstairs and we noticed a very highly detailed large diorama of a local woodland. There was a bear in there, but it didn’t come out in our pictures… oh well. You know how we love us some bears.

Overall, Meigs Point is an excellent addition to your day at the beach. 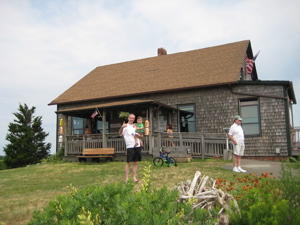