You Can’t Judge a Book – Or Building – By Its Cover
Middletown (Google Maps Location)
January 29, 2009 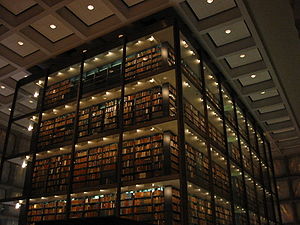 This is going to be annoying having to type Beinecke over and over throughout this post. Why can’t cool guys have cool last names like Wood? Whatever this place lacks in the naming department, it more than makes up for in the totally awesome department.

The Beinecke (seriously, I’m making a hot key for that right now) would be worth a visit even if I didn’t qualify it as a museum. The building itself is an amazing (some say horribly ugly) unique piece of architectural art. Architecture degreed Hoang found it ugly and monstrous… and I’d have to sort of agree. Yet, once you’re inside – that opinion invariably changes. 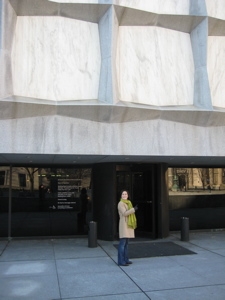 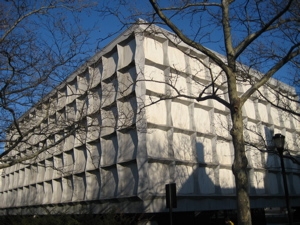 Wow, I just spent a long time here, reading up on the various collections. I’m blown away. I can’t possibly cull out the interesting stuff, because it’s all so darned interesting.

I confess… I love old books (I love old maps more, but for that I’ll have to go to UConn’s library). If I were rich and wanted to collect something (I’m not rich and find collecting things to be a silly pursuit), I think I’d collect rare and old books. And if I were rich, in love with collecting, and an international handsome thief with a wry wit and supermodel girlfriend – I’d start by stealing from the Beinecke. 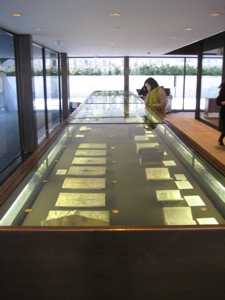 They have it all. Are you looking for various playing cards from antiquity? Like, Italian tarot cards from the 1455 – handpainted and gilded cards attributed to Bonifacio Bembo. The surviving sixty-seven cards are works of art, miniature medieval portraits. Or perhaps a pack of late Gothic Bohemian playing cards from about 16th century. Or an exceedingly rare Salvador Dali painted pack. This is all in the Cary Collection and it contains more than 2600 packs, 460 sheets, and 150 wood blocks for printing cards. My word.

Is music your thing? (If it is, be sure to get over to the Yale Collection of Musical Instruments like we did, here) Although the music collection is comparatively small, it’s rich with very rare (and sometimes unique) operas and music sheets. I can’t even begin to break it down, so check it out yourself. Ridiculous. 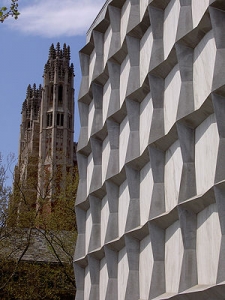 And then there are the books. Lots and lots of books. In fact, the Beinecke (opened in 1963) is one of the largest buildings in the world devoted entirely to rare books and manuscripts. The library has room in the central tower for 180,000 volumes and in the underground bookstacks for over 600,000 volumes; it now contains about 500,000 volumes and several million manuscripts.

The building and its endowment are the gift of a few Beinecke’s who were all Yalies from 1907-1910. Oh yeah, the building… I love it. It gets a lot of grief because, well, it’s pretty ugly. It’s especially jarring on campus because it’s right next to the Law School and amidst a slew of neo-Classical and neo-Gothic neighbors. But here’s the thing… It’s beautiful inside. 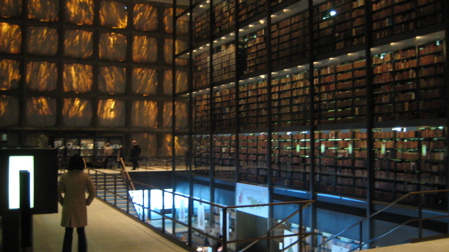 So as my title suggests, don’t judge this place by the outside; much like the old axiom about judging books by their covers. Though rest assured, MY book’s cover is going to be awesome. I’m thinking a chiseled marble sculpture of me in a museum. 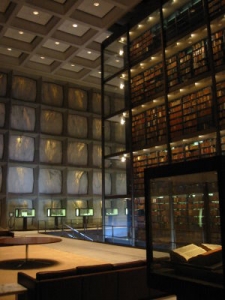 The building, of Vermont marble and granite, bronze and glass, was designed by Gordon Bunshaft, of the firm of Skidmore, Owings and Merrill; the George A. Fuller Construction Company was the general contractor. Work began on the building in 1960 and was completed in 1963. The white, gray-veined marble panes of the exterior are one and one-quarter inches thick and are framed by shaped light gray Vermont Woodbury granite. These marble panels filter light so that rare materials can be displayed without damage.

Upon entering, visitors see the glass tower of books that rises through the core of the building. Two stairways ascend on either side to the mezzanine level. Together with the entrance level, the mezzanine functions as a showcase for rotating exhibits that highlight the Beinecke’s rich collections. The Gutenberg Bible, the first Western book printed from movable type, and Audubon’s Birds of America are on permanent exhibition. 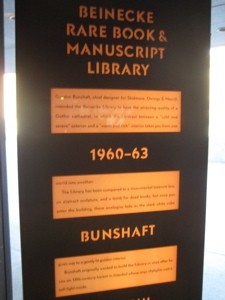 Hoang and I entered and were immediately struck by the serenity of the space. Of course, it’s a library so it’s quiet. Silent quiet. It’s almost haunting… Hauntingly beautiful as they say. The thin marble walls glow and seem to pulsate with passing clouds above. I loved it – especially after Hoang declared her distaste for the building. (This is when nerd couples like us get to use the “in your face” taunt.)

Because my pictures are as terrible as usual, I’m borrowing a couple from Wiki, which is perfectly fine to do. The non-permanent exhibit on display during our visit was really cool. Called “Book of Secrets: Alchemy and the European Imagination, 1500-2000,” it explored the pseudoscience from its beginnings to its uses in popular culture today. I’ll let them explain it in haughtier language:

“From Chaucer to Harry Potter, this exhibition explores the curious centrality of alchemy in the European imagination from the early days of print through the present. From the sixteenth century, books of alchemical secrets were published in almost every European language. Terms such as the philosopherâ€™s stone entered into the popular understanding in the world of Harry Potter as in that of the sixteenth-century magus. Alchemy was chemistry, practiced by the leading scientists of the period; it was also mystical, seen by thinkers as prominent as Isaac Newton to be the means to understand the source of life itself. Skeptics like Ben Jonson satirized it in plays; poets from John Donne to Ted Hughes adopted its imagery. The twentieth-century psychologist Carl Jung based his theory of the psyche on his analysis of alchemy. Above all, people wrote, read, and thought about alchemy from the early modern period through the present day.” 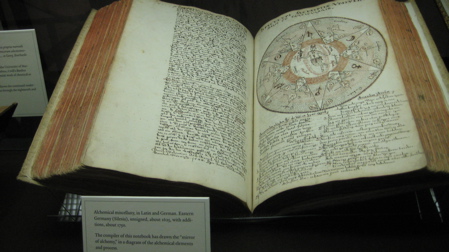 Some of the old books were amazingly detailed in both their script and the engravings and drawings in the margins. The basis of alchemy was based on the rudimentary understanding of cheimstry back in the day. As scientists gained knowledge and alchemy was dismissed, the evolution of it into a sort of mystical black art is interesting to learn about. And before you laugh, there are millions and millions of people today who believe in astrology and a 6,000 year old earth. 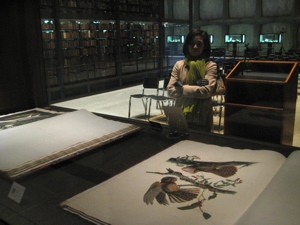 The alchemy stuff was all around, and the two permanent exhibits inhabit opposite corners. Audubon’s Bird’s of America displays were amazing. He apparently did these HUGE books (way bigger than the big ones on your granddad’s coffee table back in the day) with his signature beautiful bird paintings. I gawked.

As mentioned, there’s a Gutenberg Bible here as well… It’s funny that my parent had just spent a week out in Southern California and were bragging how they’d seen one at the Henry E. Huntington Library in San Marino. Too bad for them that what they saw was an imperfect bible. Ha! The Beinecke has one of only 5 perfect editions known to exist in the USA. (There are only 48 worldwide, both perfect and imperfect.) Note that stinkin’ Harvard got their paws on a perfect edition too… But Princeton settled for an imperfect. 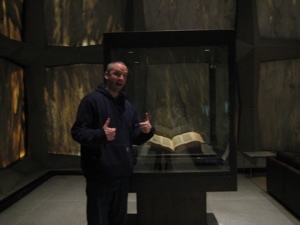 As we finished up, a little tour group of new or prospective students were doing their thing and the kids looked more bored than I am watching Elmo with my son for the 400th time. So I took a picture of a few of them just to annoy them for no particular reason: 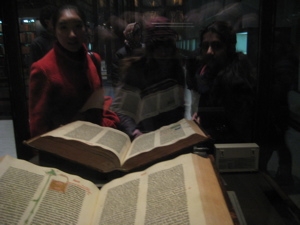 The big exhibit on display now is “Starry Messenger: Observing the Heavens in the Age of Galileo,” which looks pretty cool.

Lastly, the Beinecke is/was part of a great “museum” a Yale grad student created a decade ago. It is/was called the Urban Museum of Modern Architecture and is/was a cool idea. I keep using “is/was” because all these buildings still exist, only the brochure has disappeared. I hope to contact that grad student to get a copy of one, because I want to keep that “museum” alive. 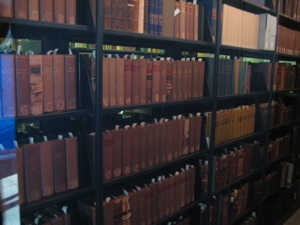 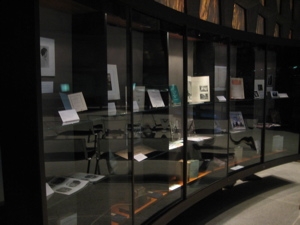