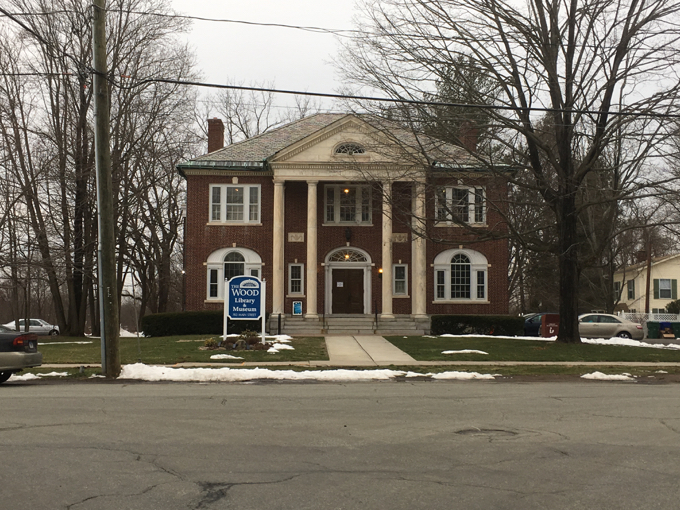 No, not the fact that a rarely open library has a museum that they advertise as a museum. What’s weird is going somewhere named the Wood Memorial. Seeing as though my last name is Wood and I’m not dead yet… And while my grandfather deserves a memorial, it wouldn’t be in South Windsor, Connecticut.

in 1926 William Wood chose Hartford architect William Marchant to design a Library as a memorial to his parents, Dr. William Wood and Mary Ellsworth Wood. From its dedication in 1928 until the early 70s, Wood served as the Town’s Public Library. In 1971, the Friends of Wood Memorial Library incorporated to oversee its operation as a privately funded library. Now, with the help of part-time staff members and a corps of dedicated volunteers, the library serves the public throughout the year. To honor Will Wood’s wish to provide a library as well as an environment for cultural, historical and scientific interests to flourish, a wide variety of activities are available. 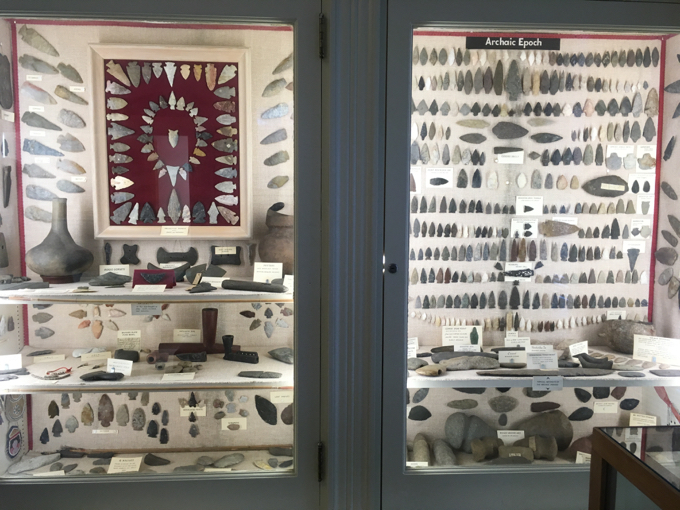 Some Native American artifacts on display

This little building now serves as a library, museum, archive repository, art gallery, cultural center, recital hall and meeting hall. It is certainly different. They describe the building as “… An architectural gem in a tranquil historic setting… filled with the serenity of an unhurried past.”

I’ve been to the Wood several times. My main visit for this page was in 2009, but I returned for their annual Gingerbread House Festival thing in 2015 and again for an opening reception for one of my favorite Connecticut artists, Kevin Van Aelst in early 2017. (This is also why some pictures are tiny – 2009 – and large – 2017.) 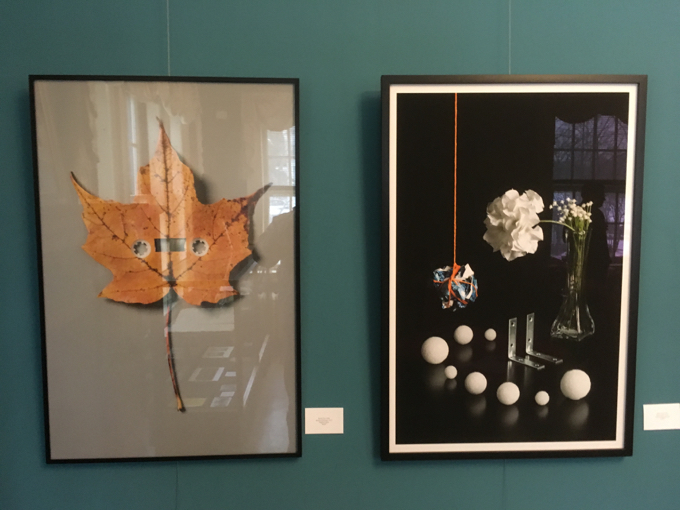 I was the lone visitor in 2009 and received a couple askance glances as I perused the various exhibits, but was left alone to do my dirty work.

Upon entering, I walked through the little library area to get my bearings. I quickly discerned that the museum exhibits were scattered about. The place has the feeling of an old home; curl up with a good book for a while, then go check out some mounted birds, return to your book, take in some art work, and so on. 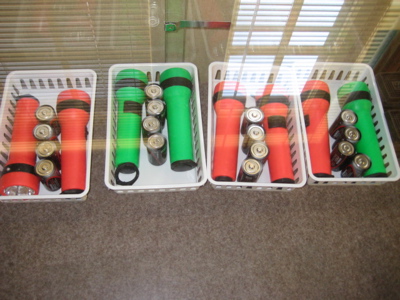 You have several eclectic choices to make. Says they:

The location of Wood Museum and Library at the head of the South Windsor meadows makes it a natural repository for two of its major collections: Indian Artifacts and Mounted Birds. From the mid-19th century on these meadows have been recognized as a prime area for both picking up relics of the past and for sighting birds, with some 240 species recorded. Other collections include: Period Furniture, Paintings, Quilts and several dozen old Cigar Boxes. 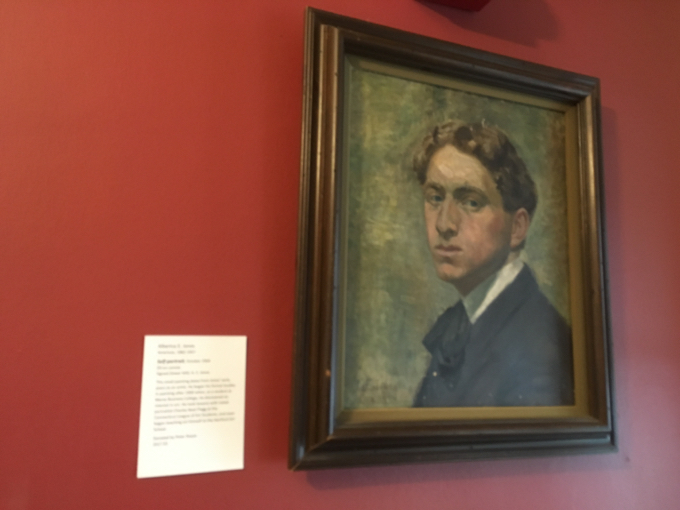 While I missed the cigar box collection somehow, tobacco farming was – and still is – a major part of what makes South Windsor (and other nearby towns) tick. In fact, you might recall my visit to the relatively close Luddy/Taylor Connecticut Valley Tobacco Museum. (Renamed the CT Valley Agricultural Museum in 2016.)

I first made my way to the back of the main museum space to a large meeting area. The deep blue walls set a mellow tone for the furniture collection along the walls. Highlights of their collection are the 18th century pieces done by Eliphalet Chapin, whose home and workshop were located just to the north of the library on the east side of the street. 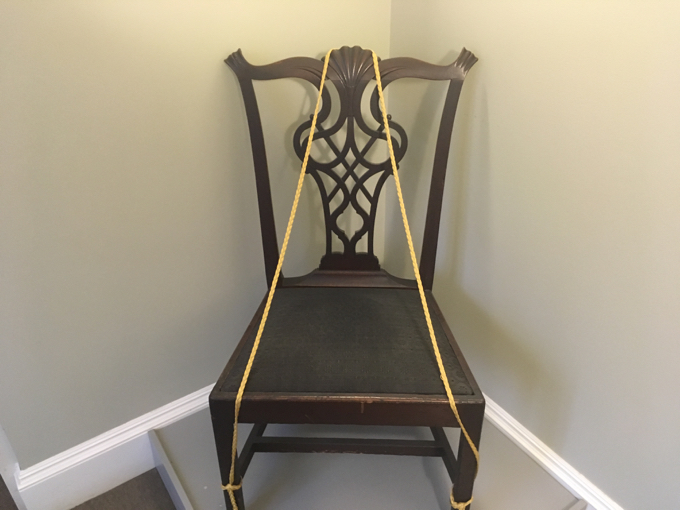 Two of the pieces, a ball and claw foot cherry drop-leaf table and a side chair are documented to have descended directly from the local families who purchased them. There is also a Chapin workshop highchest, a chest clearly made by a Chapin apprentice. Clearly.The collection also includes an earlier highchest dating from the 1740’s; an Empire mahogany card table; a Pier table attributed to Anthony Quervelle, Philadelphia, circa 1830; and several other pieces owned by early town residents. A pillar and scroll shelf clock made by local craftsman Eli Terry is on display.

There are several museums in Bristol, Waterbury and the Terryville section of Plymouth that pay homage to Terry. Heck, the town of Terryville is named after the guy – but those towns are 30 miles west of here, so what gives? I just looked it up and Eli Terry was born in East Windsor, but settled in Plymouth (later, Terryville) when he started making clocks. 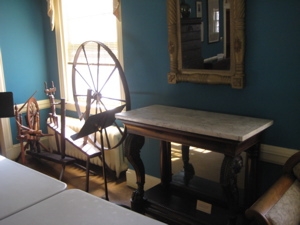 In a smallish room towards the front of the building I found the next collection: The Indian Artifacts. The museum actually has two major Indian Artifact collections on display. (Several smaller collections are housed in the archives.) In the second floor museum room I was in is the Ellsworth/Jennings/Sperry Collection, picked up on the flood plain in South Windsor, where several generations of one family farmed. These specimens are supplemented by ones from New York State, Ohio and Indiana where the collectors traveled. These 19th century additions from the mid-west are of legitimate interest to this collecton, as other finds in this same area of flood plain have included Adena and other mid-western materials as well as copper beads from Michigan. 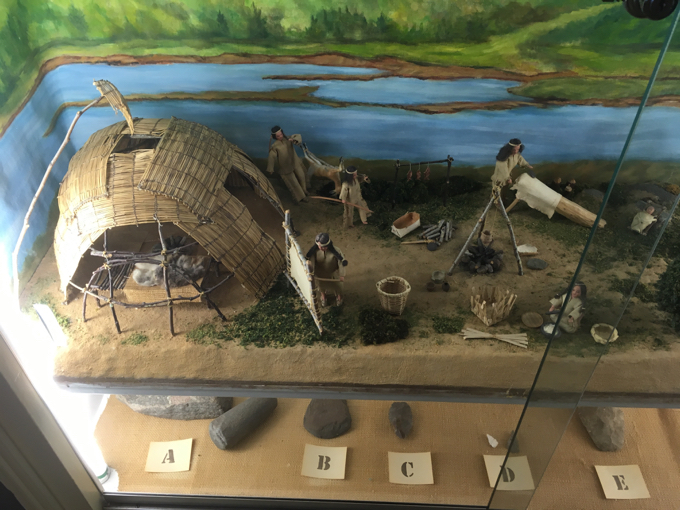 The collection ranges from fluted and bifurcate points of the late Paleo and early Archaic Periods, some 8000 years ago, to late Woodland tools from the time of European contact.

In one case, projectile points are arranged along time-lines, making the display an effective diagnostic tool, particularly for amateur collectors, who can drop in directly from the field to check their finds. The cases were laid out by Edith Vibert, the first volunteer librarian, who was also an avid student of Indian history and an amateur archaeologist. 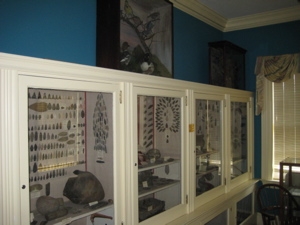 Points, pestles, knives, scrapers, hoes, axes, gorgets, bird stones (“atl-atl weights”) soapstone ware and pottery are also in the display. In the same small room are the mounted bird displays. There is some poetry in this; all those Indian weapons displayed next to a bunch of dead birds. Three collections of remarkably well-preserved birds to be precise. 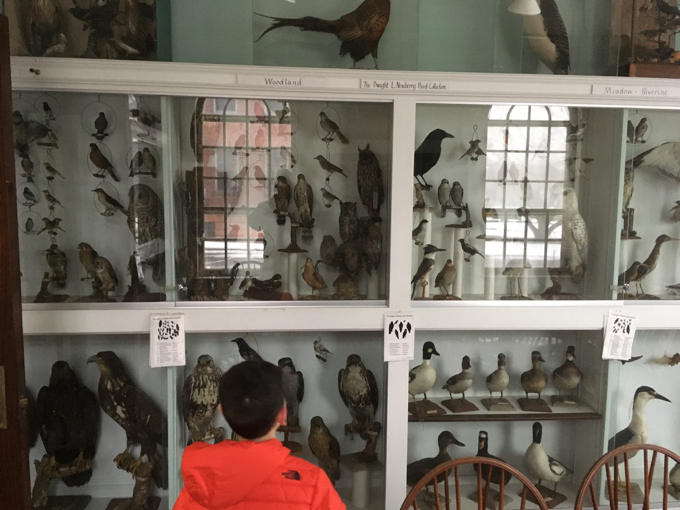 The Newbery Collection of some 117 specimens was mounted by Dwight Ellsworth Newbery (1870-1969) in the 1890’s, when he was a young man. The Newberry family owned the now renown “Station 43” site in the South Windsor meadows, which still attracts birders from near and far throughout the seasons. The collection includes a four-foot Great Blue Heron, bitterns, rails, warblers owls, ducks, hawks, eagles, and song birds, among others. Most of the species still use the local meadows as flyway or habitat. In addition, Newberry’s collection of birds’ eggs is on display. 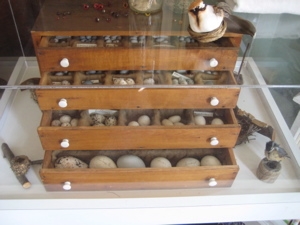 Oddly enough, this isn’t the only library in the state with a museum housing a collection of bird’s eggs. Check out my visit to the Plainville Library museum here. 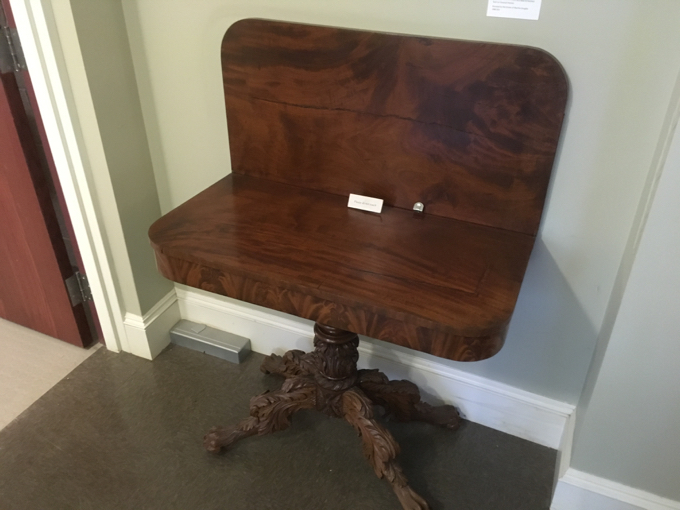 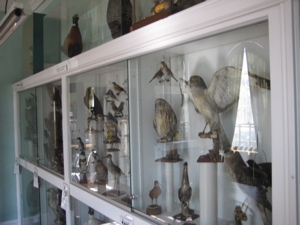 The Wood Collection was mounted in the mid 1800’s by Dr. William Wood, to whom the Library is dedicated. Although trained as a physician, Dr. Wood was a well-known ornithologist of his day, making considerable contributions to the science. Many articles on his observations of birds in the field were published in scientific journals and newspapers of the time. Some 1000 of his “study skins” are among those at the University of Connecticut at Storrs, still in use by today’s students. (Hey, I took Ornithology at UConn – and loved it. So thanks, Dr. Wood.) 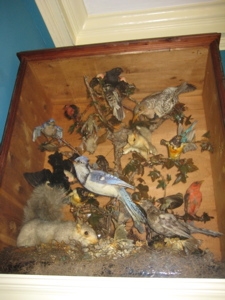 The Library and Museum also displays a bunch of paintings by moderately famous local artists. These include 13 watercolors and drawings by the Watson sisters of East Windsor Hill, Amelia Montague (1856 – 1934) and Edith Sarah (1861-1944). The sisters were well-known, successful artists in their day. Also, local post-impressionist Albertus Jones and Hudson River School artist Nellie Terry Bancroft have paintings here as well. 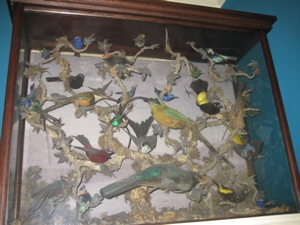 What would a local history museum be without a quilt? I’ve come to expect them and the Wood Memorial is no different. In fact, they have not one but THREE quilts on display. The Long Hill Missionary Circle’s Penny Square Friendship Quilt embroidered in the early 1890’s by women and girls (and a husband!) living in the Long Hill section of town. There’s also an 1894 Crazy Quilt! I know, right? Crazy! This quilt has an Odd Fellows emblem embroidered at its center spelling out Friendship – Love – Truth. It was won in a raffle at the Odd Fellows Convention in Chicago in 1895 by a delegate from Connecticut and later donated to library. 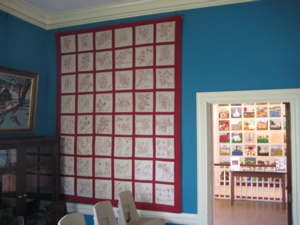 The granddaddy of them all is the town’s Bicentennial Quilt – This quilt was initiated and put together by the Wapping Community Church Women’s Spring Fair Committee in 1975/6, in celebration of the country’s bicentennial. The museum kindly provides a 14 page booklet describing each and every one of the 42 quilt squares; all representing something historically important in South Windsor. 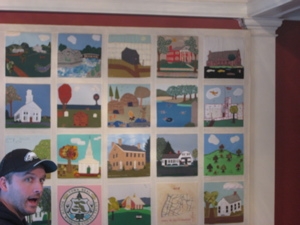 Randomly, the one above my head in the picture (since when do I ever wear a hat? Especially since a month prior the stupid Eagles lost to the stinkin’ Cardinals in the NFC Championships.) is of Molly Mohawk. You can barely see her (that’s her head bottom center). She was the first person to be buried in the Wapping Cemetery in 1766. Fascinating. 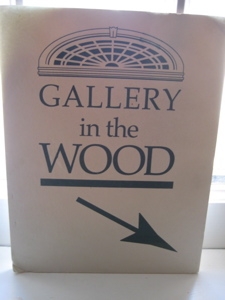 [Aside: Brandywine High School 1989, yours truly ran for student council vice president of my class with the slogan, “Who Would Make a Good VP? Steve Wood.” I lost. Which, upon reflection, was a darn good thing. I don’t think I’d have fit in at all with the student council crew with my platform of angsty indifference.] 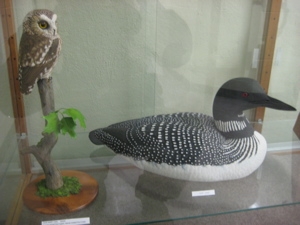 Anyway, there were a bunch of people milling about down there which hampered my courage to take pictures. The featured artist created bird sculptures (yes, more birds) which were extremely lifelike and really pretty cool. They were all on sale for prices like $2800 and such. Maybe next time. 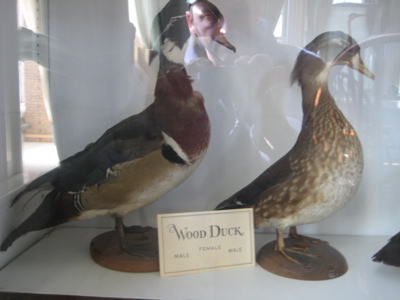