After six years of writing this, the pre-eminent website about all the things to do in this little state, I still find myself struggling to describe the state in a succinct way. But after visiting Arethusa Farm in Litchfield, I think I’ve stumbled upon one place that takes care of the stereotypical things outsiders could use to learn about Connecticut. 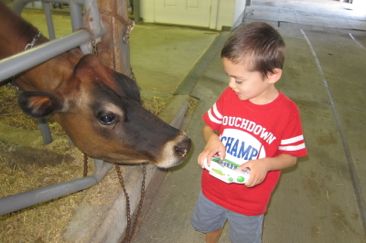 How about: “Nestled in the bucolic rolling Litchfield County hills, super rich fashion insider white guys operate a boutique dairy farm which once per year serves as backdrop for a semi-secret Manolo Blahnik sale for rich white women.”

Welcome to the Nutmeg State! Nailed it.

Except for one thing: The guys behind the Arethusa operation are incredibly nice and caring and didn’t seem to fit the uppity stereotype at all. They are, after all, dairy farmers. And Manolo Blahnik executives… But let’s start at the beginning and not dwell on the shoe thing. Because really, it has nothing at all to do with this award winning farm. 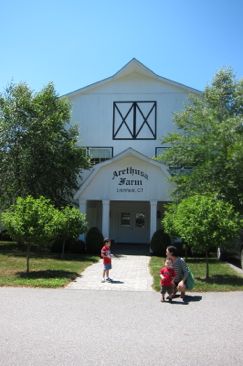 And let me pause a moment for those of you who won’t read this whole thing – Arethusa is a absolutely worth a visit. It’s the cleanest and nicest dairy operation you’ll ever visit in your life. Heck, they seem to employ a kid whose sole job is to constantly walk around and remove the poop. Seriously. These cows live better than some people you know.

I should also note that there are a ton of very good articles about this somewhat unique place. Articles in publications like the New York Times and Wall Street Journal, so if you want journalistic integrity, you can read them instead. But I have pictures.

Okay, about the name. Dating back to the mid 19th century, this place has been a farm and it’s been called Arethusa. Originally, that was the name of some Greek mythology thing – a nereid nymph who became a fountain. The name has been used for many things over the years from cruisers in the US Navy to waterfalls in New Hampshire to extremely rare orchids. 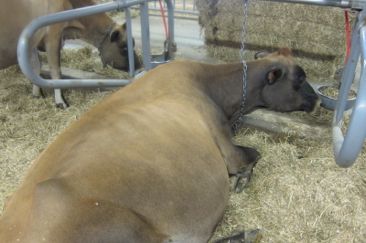 It’s that last one – the orchids – that gave name to this land. Apparently the Dragon’s Mouth orchid, Arethusa bulbosa used to proliferate on what is now Arethusa Farm. Oh well. They are ecologically suited to our low-lying bogs so maybe I’ll find one someday, even if some sources say they are extinct (they aren’t).

For 130 years the farm operated as a dairy farm, but couldn’t sustain itself through the Carter era and closed up shop in the face of Trickle Down economics in 1981. It was a horse farm for most of the next 2 decades. Enter George Malkemus (President of Manolo Blahnik’s company) and Anthony Yurgaitis (vice president), two New Yorkers who promised to save the open farmland and revive the name Arethusa.

Their “country home” in Litchfield is across the street and they didn’t want the horse farm to become a golf course. So they did what any multi-millionaire couple would do and bought the farm to protect their view. But then one of them decided he wanted to run a dairy operation. 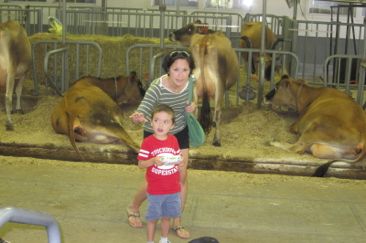 So they (again) did what any multi-millionaire couple would do and bought some purebred top-of-the-line Holsteins and Jerseys in 2001. Then they entered them in cow contests and found that they had the world’s greatest cow. Seriously: “The small herd of Holsteins & Jerseys from Connecticut brings home top honors from the most prestigious dairy show in the world. Their Holstein, Melanie was named Supreme Champion of World Dairy Expo in Wisconsin. Her Jersey herd mate, Veronica, was Reserve Supreme Champion.”

I think that’s all a bit weird, but hey, somecow’s gotta be the best, right?

Over the next decade, Malkemus and Yurgaitis bought a few hundred more cows and some more land and barns and became a full-fledged dairy farm. In 2006, good ol’ Veronica took home Supreme Champion honors from Wisconsin. The farm continued to win all sorts of prestigious awards – many of which can be seen by visitors along the walls. 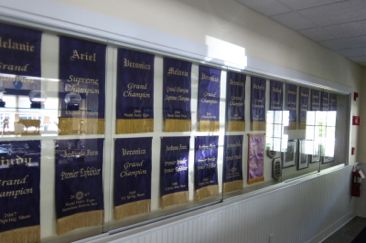 These guys are serious.

So if I have the story right, and I’ve pulled it together from several sources, they initially bought the land to protect their view and to block a golf course developer. Then one of them wanted a couple cows. They enjoyed the cows so they bought a herd. Then one said, “let’s try to sell this milk. It’s really good milk” and the other one said, “hold on, I’m at a fashion show in Caracao,” and then the other one said, “your reception is bad, you said, “it’s a go with cows?”

Or something close to that. Who cares, really, because now we are lucky to have the Manolo Blahnik boys selling us milk, yogurt, cheese and ice cream all made directly from their pampered cows. And when I say pampered, I’m not kidding. It’s all a bit ridiculous.

I mentioned above that the barn visitors walk through is impeccable. It is. If you notice, Hoang and Calvin are both wearing sandals – to a dairy farm! – and it was never an issue. What WAS (apparently) an issue was Damian’s (aka “Joopy”) old school bum-around football shirt. The following is an actual email exchange between me and my wife, regarding this photo: 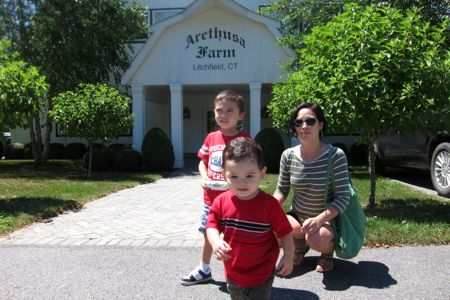 Me: “I love this photo. Joopy being Joopy, Calvin walking somewhere with such determination. You trying to do a normal family pose.”
Hoang: “Who let Damian out of the house in that shirt? Especially to go see people in fashion?”
Me: “You did. It’s ironic and hipster. You and Calvin are in sandals! To go see Manolo Blahnik!”
Hoang: “Hey man, I was wearing Kenneth Coles and Calvin was wearing Stride Rite – can’t go wrong with that.”

Oh we have fun. My point? You can wear sandals to this cow barn and be fine. I’ve been to plenty of cow barns in Connecticut and I can assure you, it’s not usually a wise choice.

There is an excellent NYT story on Arethusa (linked at bottom) which notes that the cows get, “daily tail-washing with a bucket of soapy water, conditioning with Pantene Pro-V (seriously) and brushing, plus a weekly full body wash and regular foot washes.” 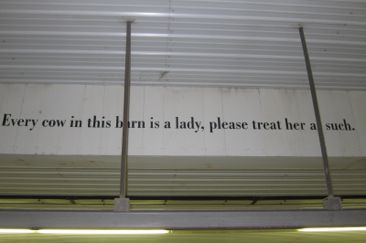 They sleep on imported wood shavings from Canada. They get their hides massaged and vacuumed daily. Flies don’t even hang around these lucky ladies. It’s all a bit, um, nuts. And yes, they are lucky ladies. As every other article mentions, visitors are greeted with a sign upon entry that says, “Every cow in this barn is a lady, please treat her as such.”

Dudes… they’re cows. Granted, they don’t even smell like cows, but they’re cows. How many cows are used to make Manolo Blahnik shoes ever year? Also, the cows on view are the show cows – and they are beautiful beasts. Arethusa has another barn full of hundreds of other cows almost a mile away. It’s another beautiful building, and I’m pretty confident that the cows over there, while not champions, are still treated as such.

There’s so much more I find interesting about Arethusa… but will try to condense, for we haven’t even touched on the actual dairy products yet (for another page). Like how the farm is built above wetlands so for the town and state to agree to renewed dairy farming, Arethusa must pick up and remove all the manure from 450 heads of cattle.

And I almost believe they succeed in this too. That’s amazing. (it’s taken elsewhere to be converted into fertilizer.) 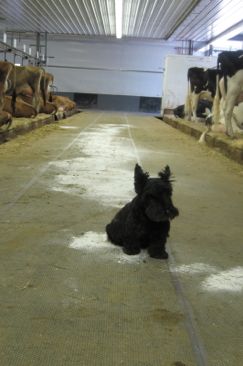 Here is their mission statement:

Located in the rolling pastures of Litchfield Hills, Arethusa Farm has a proud tradition of raising award-winning purebred Jersey, Holstein and Brown Swiss cows. We pride ourselves on providing the absolute highest level of care for our animals, and creating all-natural, farm-fresh dairy goods with a truly exceptional taste. Great milk comes from great cows, and great cows come from Arethusa.

If you’re wondering, on the day we visited one of the Manolo execs was there, in the barn, chatting with random visitors. He was clearly proud of his cows and his mission. (He was wearing some sort of ugly loafers.) I was wondering how many people help with the operation, and clicked through their website to a sub-site for people interested in things like show-cow purebred cow embryos and such”

Arethusa Farm was established in 1999. Owners George Malkemus and Anthony Yurgaitis purchased the Ltichfield, CT property with the intent of starting a dairy farm and bottling milk for sale to the local community. However, as new barns were built and old ones remodeled, a new plan started to take shape. George and Tony became interested in the world of show cows –

– a world which actually does exist; it’s like the 4-H Club for rich adults. 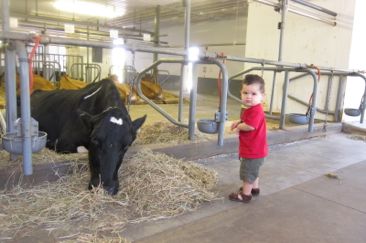 Back a few years ago,

Malkemus and Yurgaitis went on to hire Ernie Kueffner, a world renowned breeder, to help consult them on developing a first class herd. With Kueffner came several other additions — a promising young Holstein, Ernest-Anthony SC Vivian, and a group of ten open heifers — giving Arethusa Farm an outstanding group of deep-pedigreed young cows to build on.

Just a few short years later in 2004, Arethusa made history at the World Dairy Expo. Farm matriarchs, Huronia Centurion Veronica EX97 and Hillcroft Leader Melanie, were named Grand Champion Jersey and Grand Champion Holstein respectively. The pair were proven show-winners, produced a tremendous quantity of high-quality milk and continued to be outstanding flush cows. These traits, combined with deep pedigrees, keep their offspring and embryos in high demand to this day.

Overwhelming show success fueled major growth on the farm. New heifer, calf and state of the art milking facilities were built, and the herd is now almost entirely home-bred. These beautiful animals are exhibited at several national shows each year and garnered Arethusa the title of Premier Breeder at the World Dairy Expo in 2009. 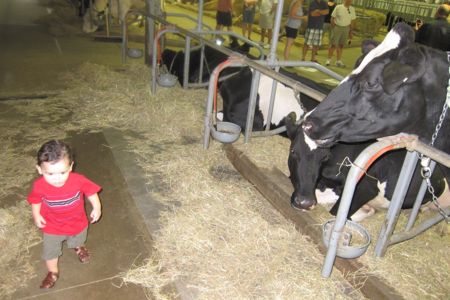 Here’s a video of Gorge and Tony on BloombergTV explaining how their $9 gallon milk is worth it. (You should watch this; I liked it.)
Here’s a direct link to the New York Times’ piece. 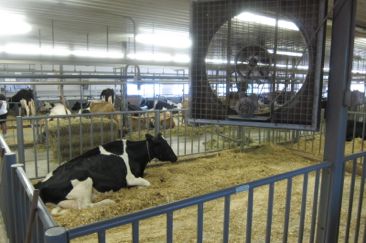 And just when you thought I was done… once per year, in late July, the Blahnik boys put on a Blahnik sample sale. All proceeds go to the Arethusa Farm Scholarship Fund whose goal is to aid agriculture students who need help paying for their education.

Right there, in the country south of Litchfield center. From what I’ve heard, it’s all a bit nuts as ladies descend like locusts on the shoes and happily pay $100 to $500 bucks for shoes that retailed $500 to $5,000. It’s a pretty down-low event, so you have to watch out for it and keep on your toes – like any good stiletto will do for you.

Perhaps more important than the dairy farm is the dairy store. So we said our goodbyes in our low rent fashion and sandals and hit the road over to the Bantam section of town to get some ice cream. Turns out, they don’t make milk and ice cream in an easy way at all either.

Arethusa Farm
Back to CTMQ’s Farms Worth Visiting Page