Notes: Please see comments for more info. Also, in December 2014 I took my sons to the “other” Watertown cave location nearby.

Every so often, perhaps once in every 40 or 50 posts I do, I come to write one for which I’m both excited and scared. This is such a post.

The story of the Leatherman is so crazy, so awesome, and so well done by others far more qualified than I that I feel a little silly writing this page. But the Leatherman’s time has come. So sit back, relax and prepare to learn all about one of the most mysterious and enigmatic characters to ever leave his footprint in Connecticut. Quite literally. 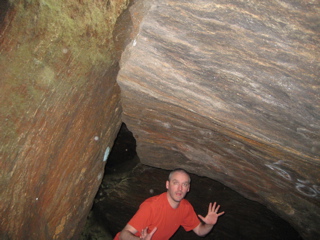 There are several books on the Leatherman and his portrait hangs in museums and libraries from Derby to Granby and points west into New York. Hartford’s PBS station produced an interesting half-hour show on the Leatherman – I really wish they’d pop it back into rotation. 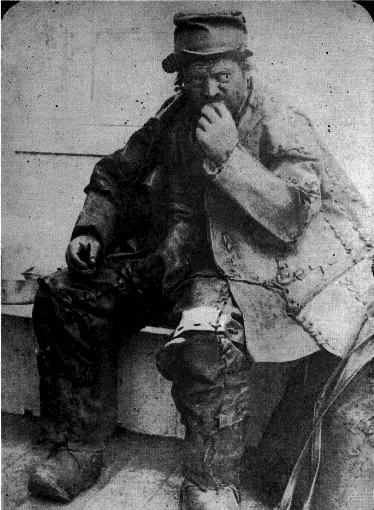 Several historians, hikers, writers and the merely curious have researched the Leatherman, culling together old newspaper articles from the 1800’s and compiling eyewitness accounts. And yet, to this day, he remains as mysterious as ever.

Giving him even more cred, Pearl Jam is apparently enamored with the Leatherman as well. Here is their song, “Leatherman,” which isn’t very good, but check out the lyrics. I heard they had a song about the Charter Oak, but it didn’t get recorded.

So what makes him so cool? The Leather Man was a legend in his own time. He walked a clockwise circuit of 365 miles every 34 days between the Connecticut and Hudson Rivers. He died on March 20, 1889 in Mt. Pleasant N.Y., and is buried in the Sparta Cemetery just south of Ossining, N.Y.

For many years after his death, his identity was unknown. Then, for just as many years, he was identified as Frenchman Jules Bourglay. However, recent research by Dan DeLuca (who has recently published a book on the Leatherman) has confirmed that he was not Jules Bourglay. But perhaps it’s best we don’t know who he was. 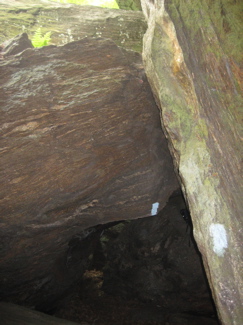 He was a vagrant and a tramp. His home was the woods of Connecticut and eastern New York; sleeping in caves and crude huts, living off the kindness of strangers. According to the legend (which has also been slightly debunked), his impossibly rigorous 34-day cycle was uncanny. He’d arrive at the same doorstep, pantomiming for food every 34 days.

If the town was too populous, or if someone startled or upset him at some point, he’d never return to that spot. The Leatherman almost never spoke, but rather grumbled and gestured his needs.

His name comes from his clothes, of course, He wore a self-made sixty pound suit of leather winter, spring, summer and fall. You know what? I’m just going to excerpt some bits from an older article from NPR here. (The original link I had here is dead so this stuff below is more or less unattributed. Sorry.)

He traveled in a clockwise direction, never once retracing his steps. From Harwinton his route took him to Bristol, Forestville, Southington, Kensington, Berlin, Middletown and south along the westerly side of the Connecticut River to the shore towns, thence westerly to Westchester County in New York state and without crossing the Hudson, turned easterly into Connecticut near Ball’s Pond. From Danbury he went northerly to New Milford, to Roxbury, Woodbury, Watertown, Plymouth and back to Harwinton, thus completing his cycle.

The Leather Man era covered almost a third of a century. It began before Lincoln was president and continued until 1889. To some he appeared to be going all the time when actually he traveled only ten miles a day taking ample time for rest and refreshment. Little children, to whom the Leather Man was pointed out on his first trips through, became of age and had families of their own and in turn may have pointed him out to their children. He became know as the “old” Leather Man because it seemed as if he traveled on forever. In time, the weight of years was noticeable. The blizzard of 1888 was too much of an ordeal even to one as hardened to the road and the weather as he and for the first time in memory of any one living he fell four days behind schedule. The rigors of that winter were such as to slow his ardor for travel and the following March he passed away on the George Dell farm in Briarcliff, New York. One of the parkways leading out of New York City is within sight of the last cave that sheltered him. 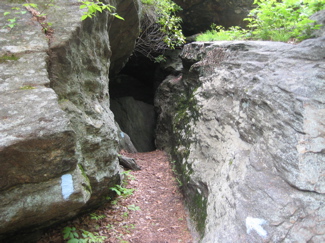 Anecdotes of the Leather Man are rich in flavor and run the whole gamut of human emotions. Pathos is often substituted by humorous situations but a strong desire to help the needy and unfortunate is evidenced by the guardianship of hundreds for this homeless itinerant. A statement concerning his regularity of travel was, “housewives set their clocks by him.” The truth of it is constantly challenged by the skeptical and yet the statement, coming from many sources, persists. How can people believe that one so carefree and apparently irresponsible could be so regular in his daily routine as to outshine the village chime that has to be regulated on occasion? The fact remains, he was regular and people knew the very day to expect him; the exact hour and almost the exact minute. Even the Leather Man could not have known the effect he had on the lives of people in scores of communities that adjusted their activities to his whims.

The Leather Man knew how to take care of himself and where to get what [he] wanted. He made all of his utensils and looked to kind friends for food, tobacco and matches only. A man of the out-of-doors, he knew every vagary of nature and how to deal with it. Never did he accept an invitation to sleep indoors, regardless of the inclement weather but made himself comfortable through his own ingenuity and handicraft. The question is frequently asked, “How did he keep warm in winter?” A number of people observed carefully his cave-keeping methods and took particular note of his heating [method]. Before leaving his cave each day an inverted “v” of small dry sticks would be placed on the “hearth” or large flat stone in the center of his shelter, needing only to be lighted on his next arrival. Additional dry wood was stored in the rock crevices within the structure. With such preparation little time was lost in starting a fire after a day’s journey and soon the small area was comfortable and warm. When enough coals had accumulated to warm the hearth thoroughly, they were swept outside and the Leather man lay down on his improvised “soapstone” to sleep in a warm, if not soft, bed. Additional warmth radiated from the low overhang of rock and the sensation must have been like sleeping in a hot oven. It was sufficiently warm for him to come through every winter in good health. 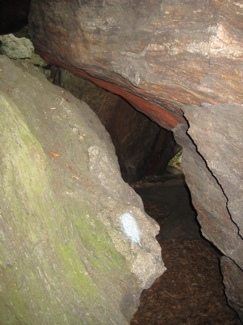 Some people have not given the Leather Man due credit for intelligence but he seems to have been endowed with enough sense to establish an itinerary in a strange land, make friends of hundreds of residents and win to his heart several score of housewives who took pride in feeding him. His welcome never wore out because he sought no more than one meal in thirty-four days from any household. He had more people concerned about his food, his health and his comfort than anyone else in Connecticut. He made his tools which he carried in a great leather bag of his own make, his outfit of leather patches and sometimes did his own cooking…

From all indications the Leather Man story will be perpetuated and remain with the best of our New England folklore. It is revived each year by the press and featured not less than six or eight times annually in western Connecticut. Only recently have libraries, museums and historical societies undertook to gather and preserve Leather Man material but the quantity accumulated thus far indicates that at some future date we shall have a voluminous record of this remarkable man in our Connecticut folklore.

Did you get that part about how he survived the Blizzard of 1888? Outside (in Southington, apparently)! I love this guy. 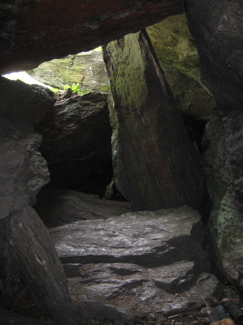 Many towns have their own “Leatherman’s Caves,” but the one that most people know – and the one I know with that actual name – is along the Mattatuck Trail in Watertown, very near its intersection with the Jericho Trail. It’s a safe bet that if there’s a cave along the route mentioned above, this guy slept in it.

It is worth noting that the cave in Watertown, which lies beneath the beautiful Crane’s Lookout, is by far one of the more habitable “caves” in the state. I put quotation marks around “caves” because our caves aren’t true caves at all, but rather rock overhangs.

Anyway, this fake cave is downright palatial. It’s easy to climb into and at about 6’3″ tall, I can just about stand upright in it. I’m sure the Leatherman considered this his Four Seasons.

It was remarkably clean for my visit. Usually, these types of places are havens for high school kids to party – and I’m sure this cave is no different, I just happened to walk through on a lucky day. Yes – walk through. The Mattatuck Trail is blazed right through the cave-like-thing, which is really cool.

I was happy to finally get out to see the cave myself and being inside it, and knowing the story of the man who gave the cave its name, it was fun to revel in my solitude and realize again why I enjoy hiking so much.

But also to know that I was going home to a warm meal in a warm house with a warm wife. 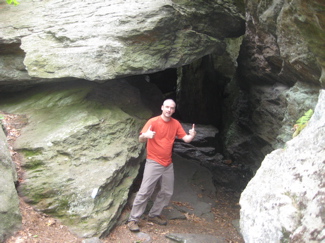