All Things Auer Farm
My page about City Steam Brewery, which is in a beautiful part of the old G. Fox Department store

Many people write blogs as a means of getting free crap. Mommy bloggers (apparently) love free yogurt and laundry detergent. Food bloggers eat endless comped meals in return for a glowing piece on their blogs. Such is the state of advertising and PR in this Twenty-teens day and age. 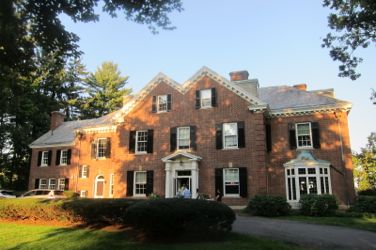 Then there’s me. I make a strong point of not accepting free stuff for this site. Call me outdated or whatever, but it’s just a thing I do. Everything on this site that I experience shouldn’t differ from YOUR experience, even if I’m a gloriously famous super awesome person.

Of course, tons of stuff all over this site are free to everyone, which is half the reason for my writing it.

What I’m getting at is that I went to a $50 Connecticut Historical Society event for free. Yup. I did. 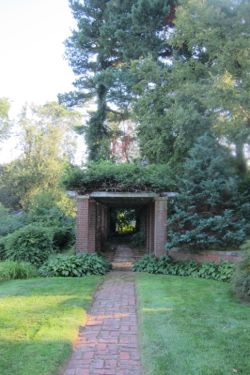 Raise a glass to history as we celebrate G. Fox and Beatrice Fox Auerbach! Tour the home and grounds of Beatrice Fox Auerbach on the 100th birthday of her former home, thanks to current owners Diane and Chris Gent. See where she entertained guests such as Eleanor Roosevelt and experience a “show” of G. Fox items. Drinks and refreshments will be served. Proceeds help fund CHS operations. Space is limited.

Thank you to CHS for extending a personal invite to me to attend. I initially said no thanks, but then rethought my position. 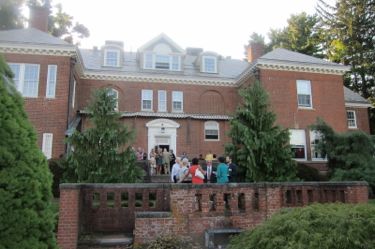 It’s not a museum or restaurant, so I’m not coloring anyone’s opinion of anything. It’s a cool little page to have on CTMQ and I could only go for half an hour anyway. (It was “curriculum night” at my son’s school and I was committed to attend.) Off I went.

The Fox house (as I’ll incorrectly call it going forward) is a few doors down from the Governor’s mansion. Pretty nice digs I would say. The current owners were present while the donors and socialites milled about the downstairs area. What do you have to do to own a Prospect Avenue mansion? Run your own financial consulting firm. Ain’t no thang.

A huge thanks go out to the Gents for allowing us (by “us” I mean me and a bunch of people in their 60’s milling about) into the former home of Mrs. Auerbach Fox – a name pretty much everyone in Connecticut knows. She’s a legend for more reasons than one. From the CT Historical Society site:

In 1847, Gerson Fox established a fancy goods store on Main Street in Hartford. From its beginning, G. Fox & Co. operated according to four principles, each of which stressed the importance of customer service:

Upon his passing, Gerson Fox’s philosophy was kept alive by his son, Moses Fox, and later by his granddaughter, Beatrice Fox Auerbach; each of them led the store to periods of greater growth and prosperity.

Under the leadership of Moses Fox and Beatrice Fox Auerbach, these principles became more than a philosophy; they were the foundation for all company policies. In the employee training manual, for example, sales clerks were reminded, state clearly what the merchandise will or will not do; never exaggerate. It is better to lose a sale than a customer’s good-will. 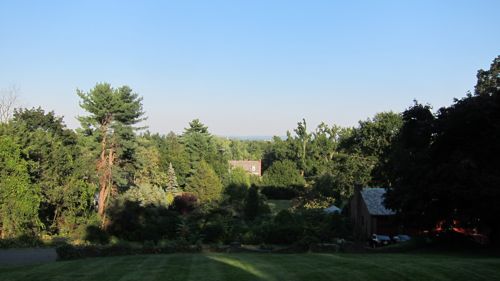 That’s great, but what about the woman herself? What makes her so great? Let’s turn to the University of Hartford’s (now dead link) for that:

From 1938 to 1965, Beatrice Fox Auerbach was chief executive of G. Fox & Company, Hartford’s premier retail outlet, and the sixth largest privately owned department store in the country. She was a pioneer in labor relations. Among her innovations was the establishment of a 5-day work week, and employee medical and retirement plans; she was the first in U.S. retailing to hire blacks in other than menial jobs and she provided advancement opportunities for women.

She was famously generous to the arts, health services, education and civic causes. Her name appears on three buildings on our own campus. But she was far more than her public persona.

A grandmother of twelve, at the age of sixty, Beatrice Auerbach began a series of trips which took her to all parts of the world. Personal diaries and correspondence and the recollections of friends, family and associates open a window on the life of Beatrice Fox Auerbach who, when asked for interviews often responded, “Don’t write about me as a business woman; call me a woman in business”. 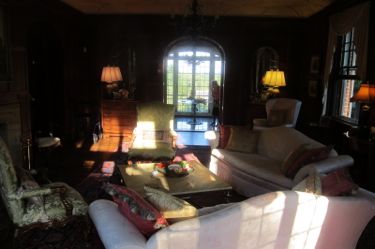 She was good people. And her house was/is very nice. The event at the Fox House was sort of a kick off to a series of public events around the state wherein CHS is bringing a few of the Fox artifacts and a lot of the Fox stories “to the people.” Judging by the turnout at this event and from what I’ve read online, people really, really loved G. Fox. (Disclosure, it closed while I was at UConn and I never, ever went there.)

(G. Fox was sold to May Department Stores and then became Filene’s and are now Macy’s – the few that still exist anyway. In downtown Hartford, the building is a mixed building, community college campus, and the City Steam Brewery.)

I spent some time talking with my friend Jen who was with CHS at the time before she reminded me that she had work to do. Ok, I get it. No one wants to talk to the weird guy with the camera. I grabbed a glass of wine and some cheese and fruit. I felt fancy.

There’s a lovely porch and patio area off the back of the house which takes in a nice view of Hartford. Inviting old koi ponds and trellises allow for one to sort of get lost in the wilds of western Hartford.

Back inside, the design and décor immediately reminded me of the Governor’s mansion down the street. (Here’s my visit to that swanky joint, where we met Jodi Rell.) 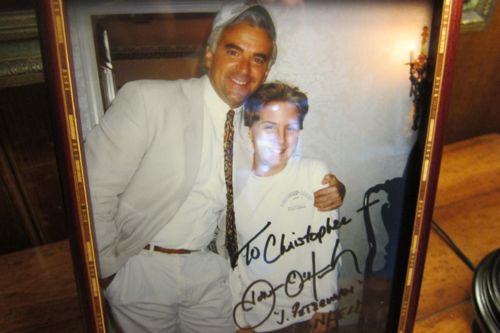 I first poked around the Gent’s stuff, which I know sounds completely creepy – and let’s be honest, it is – but come on. A signed picture with J. Peterman!

[A) Actor John O’Hurley is a West Hartford native and is around here quite often. B) I had absolutely no idea that J. Peterman was a real company and that their catalogs really were just like they were lampooned on Seinfeld. In fact, I’d argue they are worse now that I’ve spent 10 minutes there.] 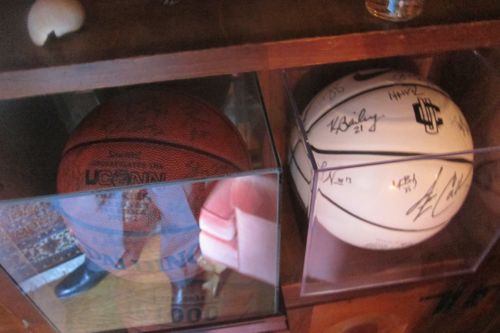 Into the office and Mr. Gent has an impressive collection of signed UConn basketballs; men’s and women’s. While I have no doubt they are authentic, I will never look at these things the same way after I became friends with someone who worked in the men’s basketball offices and told me half those signatures are phony-baloney.

One room had a table with a bunch of cool G. Fox artifacts – all property of the historical society. For some reason this bottle of G. Fox private label rye whiskey generated a ton of buzz (no pun intended) when I posted it on Facebook. It was opened, which leads me to think it may have been filled with tea or something. 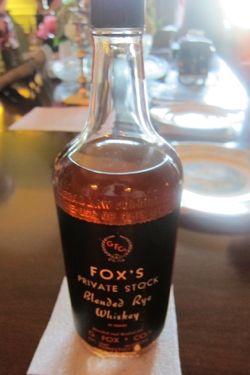 There was also the brass fixture from an elevator that showed which floors patrons were being taken too. Apparently this was a big thing at the store, as the elevator operators were characters themselves.

I overheard a few women reminiscing about their elevator experiences, mimicking the operators in a sing-songy voice: “Mezzzzz-a-niiiine! Lingggg-erieee!” They were really getting emotional about it.

There were old dresses and shoes and assorted mid-century sundries. But for me, the most interesting thing was some guy named DiBella. Googling him, I come across a corrupt bum (still active in Connecticut’s MDC and politics) named William DiBella and his son named Mark (a lobbyist) and another one named John. They all have connections with Old Saybrook which will be important in a second.

This DiBella owns (or said he did) 960 Main which is, of course, the site of the old G. Fox. He appeared rich to me and his dainty painted up wife looked the part as well. No matter, he was here supporting the cultural mission of the CHS, so that’s fine by me. 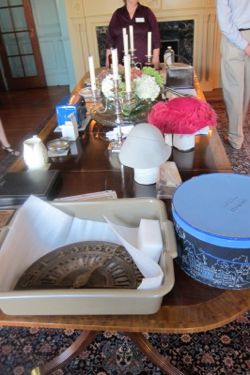 He was regaling a few of us in a corner about the G. Fox attic and some of the stuff he’d found up there, including an old Santa’s sleigh and carriage that were used at Christmastime. He went on to mention all sorts of treasures he’d found in nooks and crannies of the block-sized building.

He was saying all this in front of my friend Jen, a CHS employee at the time who was intimately familiar with the G. Fox stuff right in front of us. I suggested he donate that stuff to the CHS, but his wife told me they did give it all to the Old Saybrook Historical Society – but promised to give some more of the stuff to CHS. Who knows if they ever did or will.

I have a bunch of stuff that I’ve collected about Beatrice Fox, but I don’t feel like writing anymore. I mean, this isn’t even a museum. I’m nuts. 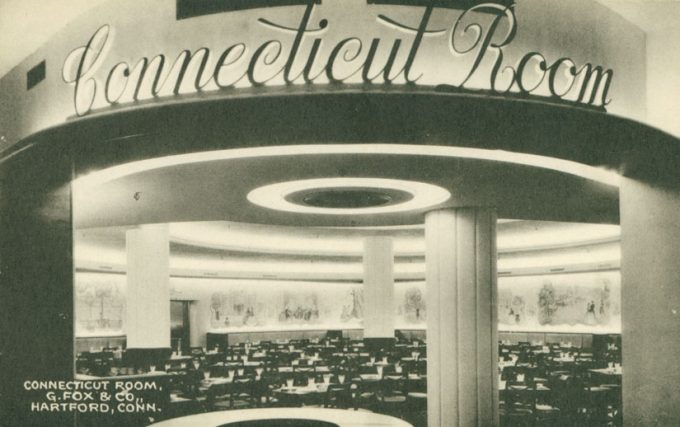