[March 2009 Update: A new benchmark has been placed at the true highpoint here, a few yards from where we climbed to. This does not upset me. Too much. Nope… not at all. I swear.] 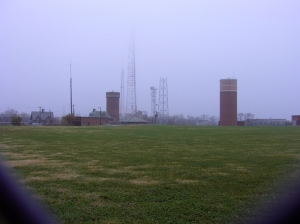 The District of Columbia is one wacky little place. It’s not a state; I don’t know what it is exactly. It votes so ridiculously Democratic (91% for John Kerry in 2004) as to be a joke. It also votes for Marion Barry… Again and again. It’s crime-riddled in parts, super-rich in others. Perhaps most curious, though, is that its highpoint can be reached via subway. I had initially planned on taking the subway north from our hotel to the highpoint area, just to make it unique. However, after thinking about it, I realized it was probably much easier to drive to it. That, and by doing so, I didn’t have to tell Hoang where we were going until we were there. (I came up with this idea after realizing that the guy up on Spruce Knob must have done the same thing to his poor unsuspecting wife, or she’d not have agreed to drive the family car up there.) 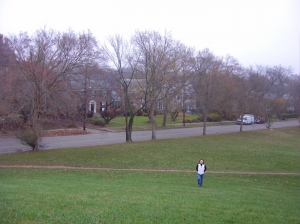 That’s not a criticism of Hoang at all. DC’s road planning leaves much to be desired, and it’s difficult to know where one is going if one doesn’t have a map. I used this confusion to my advantage, circling the Dupont circle twice in an effort to throw Hoang off any scent of where she thought we were headed: the famous Mall downtown. I missed the optimal exit (Connecticut Avenue) so I took the Massachusetts Avenue one instead, since it headed north as well. I cutover to Connecticut Ave near the huge and beautiful National Cathedral. We passed the Vice President’s house and the Zoo before stopping for some much needed coffee. It was at this point, about half way there, and after 15 minutes of stop and go urban driving that Hoang finally asked, “Where are we going?” (I guess the fact that our surroundings were getting decidedly more residential rather than presidential tipped her off.)

I stammered, “Errr, uhm, it’s a surprise!”
“Just tell me. Are you lost?”
“No, I’m not lost… We’re almost there, it’s only a couple more miles up the road.”
“Just tell me, baby.”
“Fort Reno Park. I read about it and it sounds really cool!”
“I’ve never heard of it. What happened to the Lincoln memorial, the reflecting pool, the Vietnam War Memorial, the Smithsonian?”
“Pshaw… They pale in comparison to what’s at 39th and Fessenden, trust me.”
“We’re going to the highpoint, aren’t we,” she lamented, with a dejected exhalation of coffee breath. 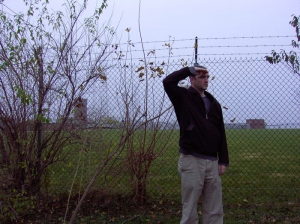 “Yeah,” I trailed off, but perked up and offered a rapid-fire response. “We are. But it’s nearby and it’s right along the road and we’ll only be there a minute and it’s a straight shot afterwards to the places you mentioned and we’re still on schedule and you’ve got a big ol’ coffee and its’ not raining and it’ll make me happy and isn’t it better I didn’t tell you and now we’re almost there and it’s the last highpoint until May next year at the earliest and…”
“Shhhhhhh, calm down. I don’t care. You freak.”

And with that, I parked on 39th Street NW, crossed Fessenden, jogged up the little hill and stared at the array of TV/Cellphone/radio antennas from behind a chain link fence. Not exactly Mt. Hood but a highpoint is a highpoint, right? Hoang took some photos of me at the summit, but I wanted more and better ones. She then pointed out the large elementary school below us a couple hundred meters to the south and said, “I think that that school may find it a bit sketchy that some random people are taking pictures of a fence, some antennas, and their school in this Terror Alert Day and Age. I agreed, so we ran down the tiny hill and back to the car. 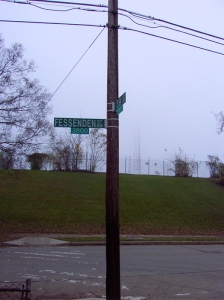 The rest of the day was spent doing what normal Americans do on vacations; we enjoyed several of DC’s sights, monuments, and the new Native American Smithsonian. The new WWII memorial is very powerful, and the Vietnam and Lincoln ones always are as well. The Native American museum, however, was a bit disappointing. It is very poorly laid out, and there is way too much multi-media. I learned nothing there except how much is stinks when a fire alarm goes off at a large, crowded, museum. After our day in DC, we visited with friends out in Shady Side, MD, and then drove north to Wilmington, DE and my family. Funny how Ft. Reno Park wasn’t mentioned to anyone that evening.

After another successful highpointing road trip under our belts, it dawned on me that in 5 days, we purposely drove to and visited a total of 9 places at which we were alone: Holyland USA, Centralia, PA, PA highpoint, tiny church, tiny post office, MD highpoint, Dolly Sods (though there were plenty of hunters), Seneca rocks (the visitor center was closed, to be fair), and the DC highpoint. Through it all, the horrible fog, the never ending rain and drizzle, the oddities, the stupidities, the pb&j’s, and the silliness, we had a great time. I am a very lucky man to have Hoang in my life… I’m sure I wouldn’t be on this journey alone. It’s only fun because of her. 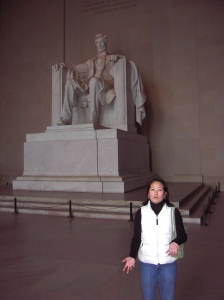