A Foot in My Mouth (Probably)
Afoot in Connecticut, 2013
By Eric D. Lehman

Afoot in Connecticut is a love letter to many things. In fact, it begins with a story wherein the author hikes off-trail among the quarry cliffs at Sleeping Giant State Park in Hamden to bury love letters from an ex-girlfriend and ends with him falling in love with his current wife, Amy. It’s a cute conceit, and aside from a few pithy passages here and there, it generally works.

But beyond the girlfriends and wife-to-be, the book is a love letter to other things. Eric Lehman loves tea. In fact, he loves it so much that he brings a little camping stove to sit in the woods on breaks during short day hikes to brew it. My man notes his tea-brewing activities on almost every hike chronicled in Afoot in Connecticut. Me? I’d just bring a thermos of tea if I needed tea on every five mile hike I took.

In addition to the tea, there’s also a lot of love for dried fruit and nuts. Also, since finishing the book and poking around the internet, I’ve learned that Lehman also loves marshmallows:

…Most of you know that roasting a marshmallow can be a sublime experience. Something that takes us back to childhood and makes us feel like the future isn’t so bad. The wonder of turning this piece of sugar into something more than itself is something that all of us can appreciate.

Bold claim. It’s that type of overwrought language that plagues Afoot in Connecticut which is, more than an ode to tea and and nuts and fire and Amy, a love letter to the woods of Connecticut.

It is clear that Lehman loves Connecticut. He is certainly one of the most prolific Connecticut-centric authors and poets in the state, and I certainly appreciate that. He’s taught creative writing at a few of our universities and is currently at the University of Bridgeport. Respect all around.

Most of you know that I’ve hiked more trails miles in Connecticut that 99% of all humans who have ever lived, and I realize this book isn’t for people like me. I’ve literally walked almost every inch of trail described in this book. But this is Connecticut, not Alaska. Almost no trail here is all that difficult for anyone in reasonably good shape. It’s possible to describe the hidden beauty around our state without overstating things.

(This, from a guy who goes bananas about the Hockanum River Trail…)

Several chapters describe Lehman venturing like Grizzly Adams into the wilds of… Cheshire? Hamden? Simsbury? New Milford? Like his description of roasting a dang marshmallow, it’s all a bit much for me.

But! But I’m sure it’s fine for most readers who aren’t familiar with our state’s trails and hills and rivers. For them, Afoot in Connecticut offers several jumping off points for exploration. Lehman explores a decent variety of terrain and counties; from Sleeping Giant to the Litchfield hills to the Tunxis State Forest in the north-central part of the state and others. 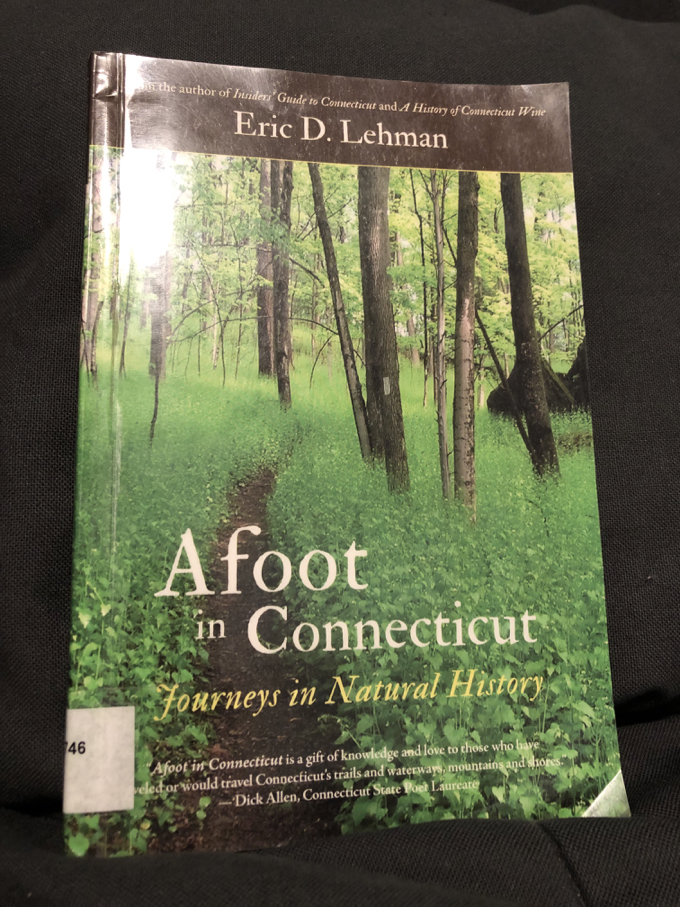 Over the course of his walks, he grows friendships, courts women, and meets his wife. He also suffers a long and tortured search for the so-called George Washington Road in Durham near the Mattabesett Trail. I had no issue finding it in 2008, but who knows when Lehman searched and what had occurred in the interim.

More tea and stove lighting and fire-building. For what it’s worth, I’ve never once used my stove in Connecticut, nor have I started a backwoods fire. From what I gather, Lehman has done both approximately 800 times.

I kid, I kid. The most striking passages in Afoot in Connecticut are the two really weird “walks across Connecticut.” The first was an abject failure, lasting only a few days and ending in crippling blisters and searing pain.

To be fair, he tried to hit campsites/motels which is very difficult in our state. It required lots of road walking, unfortunately. At one point, Lehman likens the climb up the hill behind Lake Compounce to Mt. Everest. My word. He also, oddly walks through downtown Bristol to get to his overnight accommodations. Which, while commendable in a way, is also pretty odd.

The book was published in 2013, but I gather that several of Lehman’s walks were years prior. In 2013 the last four miles of Connecticut’s section of the New England Trail to Long Island Sound were completed, allowing a true, woodland “walk across Connecticut.” Campsites are slowly being added, which is great, but too late for Lehman’s efforts.

The author claims to have spent “hundreds of hours” poring over maps and driving around, trying to find a suitable route. He began his first attempt at West Rock in New Haven (several miles from the coast, but whatever) and planned to hike north up through Hartland on the Tunxis Trail.

As I said, it did not go well.

Day two had been much harder than expected. My left thigh hurt and my right calf cramped up horribly as I was resting at the bed and breakfast. I counted five blisters now, including one that had blown up like a balloon the size of a sixth toe. I was in constant pain, even when not moving, requiring the constant use of ibuprofen. I decided that the weight of the pack was prohibitive, but couldn’t choose anything to leave behind. I probably had too many cold-weather clothes, shirts, and socks. The packages of noodles and oatmeal were certainly too numerous, lying idle while I devoured restaurant food. I feared that I couldn’t finish and would need more than this one break day.

Dude. West Rock to where he was is about 23 miles. Let’s call it 24. Two twelve mile days, with relatively little climbing and my man was half dead. I appreciate his honesty, even if it lacks the self-effacing humor of, say, Bill Bryson’s A Walk in the Woods. Sorry, I found this whole exercise patently ridiculous.

More aggravating, Lehman attempts a second “Walk Across Connecticut” which is really weird because this time it was almost all road-walking (ick), and … more rookie mistakes were made! Running out of water! Running out of food! Poor route planning! Honestly, Lehman is clearly a good guy, but how does this happen in Connecticut?! On ROADS, no less. All this with a hiking partner too. As the kids say, SMDH.

After meeting Amy and exploring the state through her fresh eyes, he wised up a bit. The two hiked a good chunk of the Appalachian Trail together but stayed in B&B’s and ate fancy meals and got shuttled around. Smart.

There is some wildlife wackiness throughout; he calls a red eft a lizard, says black squirrels are exceedingly rare, and his hiker buddy steps over a porcupine without noticing it. C’mon. And since I’m piling on, Lyme Disease was named for Old Lyme, not Lyme. And it’s Bash Bish Falls, not Bish Bash.

I strike that last bit. Because who cares. I get the need for florid language and exciting descriptions of places and things that perhaps aren’t all that exciting. Heck, I do that every day here. But there was just something about this book that irked me. (Bryson’s A Walk in the Woods did as well, so it’s likely just me.)

Still, I love reading others’ accounts of Connecticut hiking and discovery and for that, I thank the author.