No One Cares About the Gold Coast Anyway
Traveler’s Guide to Western New England and the CT River Valley
Tim Mulligan, 1994

This review completely ignores the non-Connecticut portion of the book.

It is absurd to review a travel guide from 1994 for all the obvious reasons. This book was published just before the internet began to take-off, so there are no websites listed in it at all. But moreover, the world is a different place now, so trying to follow a guide from 1994 is a bit silly. 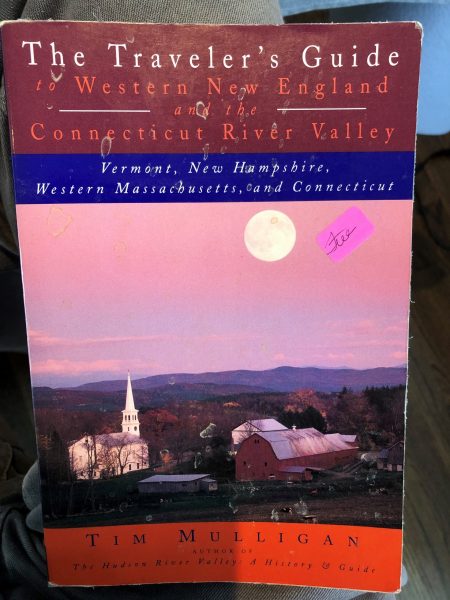 Which is why I kind of love this exercise. Author Tim Mulligan, amazingly, only listed ONE museum or cultural site that has since shuttered (The Holley – Williams House Museum in Salisbury). That’s simply amazing.

Of course, tons of the restaurants and hotels have closed or changed hands, but that’s just the way of the world.

The guide’s Connecticut section starts off with “Only Rhode Island and Delaware are smaller than Connecticut – it could be contained in Texas fifty-three times over, I’ve been told.” My friend Johnna would be pleased.

Mulligan continues, “For such a small state, Connecticut is extraordinarily diverse.” He is not, of course, talking about the people who live here, but the land and geographies. Think river valley vs. the coast vs. rural farming areas vs. forested hills.

The guide completely ignores Fairfield County, saying that the Gold Coast towns are “essentially bedroom communities for New York City, and for me, they have little to do with what gives Connecticut the special characteristics that make it worth visiting.”

Which is really weird because the book’s title is “Western New England…” and Fairfield County is literally the westernmost part of all of New England. Regardless, the author rightly notes that perhaps the best selling point for Connecticut is that everything is nearby. (Which is, of course, the only way CTMQ can exist.)

The Connecticut section begins with a nice and short history of Caucasian Connecticut with Adriaen Block (spelled as Adrian here) and then Thomas Hooker and his crew.

Mulligan ties Hooker through to the Charter Oak story and “The Fundamental Orders of Connecticut” which are housed in the Connecticut History Museum at the state library. That brings us to the early 1990’s and what the state has to offer travelers.

He starts with Hartford and its insurance history and Samuel Colt… “Hartford is a very handsome city,” he writes, mentioning – rechecks the text – the Civic Center and Constitution Plaza as standouts. Oof. There is a nice focus on the Wadsworth with a mention of Chick Austin’s house on Scarborough Street. Apparently, back in the day you could just call up and go check it out. (I believe you can still see the house today, you just need to jump through a few hoops.) 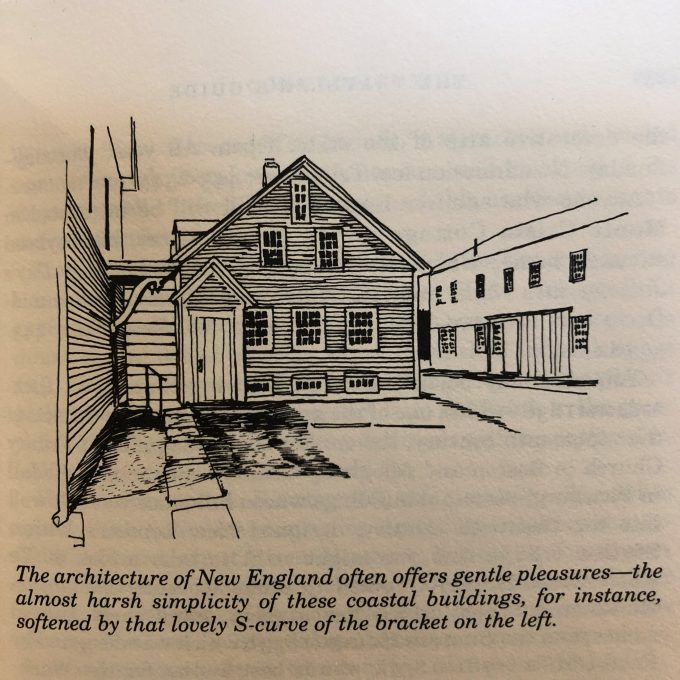 Mulligan writes, “Farmington, one of the loveliest suburbs in New England, is exquisite in a way that only great quantities of money can create.” If you weren’t convinced the author avoided lower Fairfield County, now you are. He describes Hillstead and Avon Old Farms lovingly.

Moving further away from the capital city, the book recommends Old Newgate Prison, Wesleyan, New Britain Museum of American Art, and… Suffield. Suffield? Yes, and appropriately so. It mentions the first cigar factory in the US and the beautiful main street through town.

There are the Wethersfield usuals, the Windsor usuals, the usual Dinosaur State Park in Rocky Hill and randomly, Roseland Cottage in Woodstock thrown in.

This guide throws in some of the most random facts that very few appreciate. I am one of the very few that loves how it notes Stonington is more or less the only Connecticut town actually on the ocean and not “just” the Sound. Good. Several pages on Mystic Seaport. Good. And not not nearly as much on the aquarium. Good.

He hits the Proper New London highlights and loves Essex, loves the steam train, loves the steamboat, loves Gillette Castle, and loves the Goodspeed. There is, of course, tons of New Haven and Yale content, which is very well done.

Moving on… “Litchfield is the prettiest village in the area and one of the prettiest in New England.” I didn’t read the non-Connecticut stuff, but I wonder how many times he wrote this same thing about other towns. I’m sure several. The author is forgiven because he also writes things like, “Technically, this lovely little trip encompasses more than the Litchfield Hills, but so what.”

I Love that. (This particular tour took in Lake Waramaug, a Washington hike, The Gunnery, Roxbury mines, Woodbury museums and shopping, and even mentions Bethlehem and Morris on way back to Litcfield. This guy is really good, even all these years later. Another tour starting in Litchfield takes in Norfolk, Salisbury Another Litchfield drive – Norfolk, Salisbury, and Kent – certainly one of the best options in the state.

There’s a section of where to stay and eat, which includes this:

Oof. (The Goodwin in Hartford was the one hotel.) I think the author would sing a different tune today with what’s happened in West Hartford, Glastonbury, and other towns in the region. But he was on point in the early 90’s.

This travel guide is honestly one of the best. It’s still incredibly relevant all these years later and I really like where he focuses attention and appreciate the decisions that were made about the places he doesn’t.

You won’t ever find this particular guide anywhere, and you surely didn’t read this whole page, but there you go. Maybe Tim Mulligan will read it someday and I hope I’ve made him smile.