1:22 PM, I tweeted that I have a Calhoun story
1:23 PM, Rep-Am sportswriter Ed Daigneault tells me to write it down. I just did.
2:22 PM, I publish it for your enjoyment

I toured UConn’s Storrs campus in the late summer before my senior year of high school in Delaware. I never gave much thought to which college I’d attend other than, “I’m not going to Delaware. Or anywhere south of Delaware. Or a small school. Or Rutgers (where my older brother was a junior). Or a school that required a flight to attend.” That was pretty much my list of qualifiers. 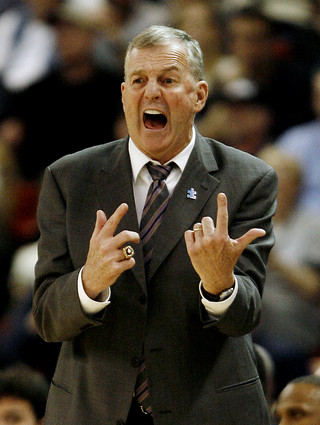 I only applied to UConn, UMass and Rutgers. Even though I knew I didn’t want to copy off my brother. I had a romantic vision of what New England was like and I thought I liked it. Autumn leaves, chilly football games, Downy snow weighing down hemlocks…

I was accepted to all three state schools and only visited the two northern ones. During my UConn visit, part of the tour included a stop in the infamously constructed Homer Babbidge Library. Avoiding the falling façade, we entered and were stopped at a little kiosk playing a loop of “The Shot.”

I’m from Delaware. I have always loved football and hockey. I couldn’t have cared less about basketball. Sure, I watched the Sixers here and there growing up and Villanova’s crazy 1985 championship was forced upon all young men in the Delaware Valley.

I had no idea what “The Shot” was. I looked at my watch from the back row of prospective students and only paid the already-worn video from the previous spring my half attention. Did UConn even have a Division I basketball team? I wondered.

The titter in the group in front of me drew me in. Whispers of “Oh my god, this was so awesome!” and “I’ll never forget this as long as I live!” emanated from the kids to their parents.

So I watched. I listened.

HOLY CRAP DID YOU SEE THAT GUY NAMED TATE SOMETHING CATCH THAT FOOTBALL PASS FROM SCOTT SOMEONE AND SCORE WITH NO TIME LEFT TO BEAT THAT ORANGE TEAM?!

Okay. That was exciting. The tour guide spent a good 5 minutes describing “The Shot” and its effect on campus earlier that year. None of this meant anything to me, but I couldn’t help but be intrigued that the school I was thinking about attending in northern Connecticut had a relevant basketball team and no real hockey team to speak of.

Over my four years in Storrs, I grew to hate walking a mile across frozen wasteland at 7:45 AM with an ever-present Alberta Clipper slicing my skin through my grunge-era flannel shirts. Romantic New England winters my frozen ass. I also grew to love watching basketball. I enjoyed the talents of Donyell, Donny, Kevin Ollie, and Ray-Ray among others.

I learned about the Big East and the finer points of the game and how much Syracuse sucked and that Duke was the worst place on earth. I learned that winning big games meant snowball fights and bonfires, no matter how idiotic that is. I learned that when you finally take that English 109 course you’d been avoiding for no reason other than it was only taught a mile away and you see 3 starting basketball players on the first day, you’ll never get an easier A in your life. Most of all, I learned to love college basketball.

I also learned how to decipher Calhounese. Part of being a UConn fan is being able to discern what the Hall of Fame coach was saying when hyper-excited or hyper-pissed. There is no such thing as hyper-in-between for Coach Calhoun. Even my friends in Delaware would prod me by making fun of my school’s men’s basketball coach’s unique mumbling, bumbling, spittle—driven, sweat inflected dialect.

Until his retirement, my wife (a fan as well, for she lives in Connecticut) and I would eagerly anticipate the post- first half Calhoun interview to get a good visual on how much dried spittle had accumulated in the corners of his mouth. A lot meant he’d been doing a lot of jabbering the team was probably failing him. A little meant we were good for a win.

I am forever indebted to my friend Ted Richmond. Somehow, through some stroke of luck, Ted had scored the greatest on-campus job there was. “Inventory Controller.” Somehow, through an even greater stroke of luck, Ted hooked me up with his job for the summer when he, being more intelligent than I, could relax and not suffer through some engineering level physics course we BS students had to endure.

The job paid incredibly well for an on-campus job, because it was directly with the state rather than the school. Two middle-aged men did it for a living. I could make my own hours around my classes. I quickly learned that half of my job involved not doing my job because that would spell doom for the two lazy gentlemen who did it to pay their mortgages.

It was ridiculous. After simply doing my job for a few days, I was given a talk. Complete with a patronizing arm around my shoulder and a twinkle in my mentor’s eye, I was told to “slow down. Make sure you’re getting everything right. Enjoy the job. Don’t take it too seriously or you’ll burn out.”

I loved that job.

An inventory controller receives a list of new (or sometimes old and moved) university property – which is pretty much every single thing that costs money owned by the school. Inventory controllers are responsible for tracking down those items, tagging them with little bar-coded stickers (at the time) and recording that bar-code’s number and the exact location and condition of the item.

This job got me into every nook and cranny of that school. Creepy storage areas, dean’s offices, state-of-the art laboratories – everywhere.

Then it happened: the order came through that the offices in Gampel Pavillion all got new Gateway computers. Gimme. That. List.

I got it. (I do recall that at that time another random student was working with us and he was pissed I got that list. Hey man, seniority rules.) I probably wasted an hour or two before going to Gampel. I tagged some stuff in reception areas and the locker rooms. (Which were very nice, even back in ’95).

I happened to know a manager for the women’s team and chatted her up for a while before being let into Coach Auriemma’s office to tag his new computer. His office was the nicest one I’d seen on campus. Dark wood, huge desk, nice cabinetry – the works. Geno wasn’t there, so I had the chance to poke around a bit. Controlling inventory takes serious time and effort.

Coach Calhoun wasn’t there either so I told the assistant down the hall at his office that I’d have to return when he was. (Not really true, of course, but you understand my logic.) I worked for the State of Connecticut and I had a Very Important Job to do and I absolutely must return when Coach Calhoun was present because I see here he has a new laptop so he’ll need to have it here.

(I don’t know if that was even true, but whatever. I had to wait to gain access to many offices to be occupied during the course of that job, so it wasn’t so odd.)

Through my women’s team contact, I was able to peg a time when Calhoun would be there.

I went, I spoke to the assistant, again explained my important mission and was granted access. Wow. This office made Geno’s look like child’s play. The desk was bigger. The chair was bigger. The cabinetry was nicer and the man himself was bigger.

If you don’t know, he’s a tall dude. Seeing him on TV with all of his players all the time may give you the wrong idea that he’s average. He’s not. He’s taller than me and I’m 6’3”. He paid me little attention and apparently had no idea why some skinny white kid was standing in his office with a clipboard and a roll of stickers.

I explained the situation.

I explained the situation again.

“Yes. and, according to my list, a new chair and something called a credenza – I decided to play along – “whateverthefuckthatis.”

He looked up at me. His mottled skin even more reptilian in the dim office lighting. One hand raised to his temple, rubbing a tired brain containing a lifetime of basketball knowledge, with a lifetime still to go. “A credenzer?”

“Yeah. Did you get a new piece of furniture in here this summer?”

“I don’t know. It’s furniture. Do you have the World Wide Web on that new Gateway I have to get the serial number from?”

“Go to Httpcolonbackslashbackslashwwwdotnetscapedotcom. It’s awesome. We’ll have an answer in only 4 minutes.”

He was looking for the “on” button on the new computer. I suggested we ask his assistant since I had to mess with the computer anyway and really, as much as I wish now I forced Coach Calhoun to navigate the early years of the “World Wide Web,” it was sort of weird at the time.

His assistant laughed at us for not knowing what a credenza was and I pointed out that her boss had the added ignominy of not realizing that squat piece of furniture 8 feet away was brand new. She laughed. He stared at me.

I finished up my tagging and record-keeping and thanked him for his time. He was warm and pleasant and wished me luck in my studies. I wished him luck on his upcoming season and noted that Ray Allen was awesome.

The credenza was empty, save for some magazines on top. I like to think it now has three national championship trophies on it and as Calhoun turns the lights off in his office for the last time this year, he dusts off the top of it and thinks back to that long-haired inventory controller who mocked him for not knowing whateverthehellitwas.

“We” beat Duke for the National Championship in 1999. We won two more – one by sheer skill and one by sheer Kemba. We lost the worst game in history to George Mason in the Final Four. Calhoun has survived cancer thrice. He is not giving one dime back. He’s still cantankerous and funny and busy and charitable.

I have kids now. One has significant special needs. Calhoun wore an Autism Awareness ribbon prominently for years on TV. I respect that and that’s important to me, even if my son has a different syndrome.

And we almost never miss a game. My sons will know what the next “The Shot” is all about. 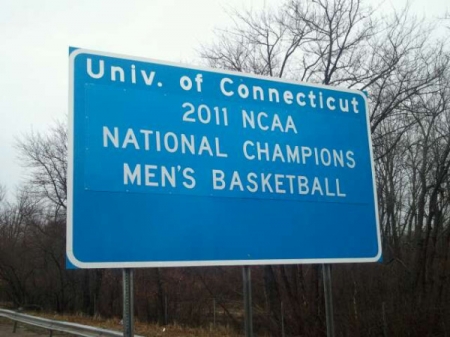