Phew. This is hard work.

I’ve had a page about Campbell Falls for several years up on CTMQ, but it always bothered me. I visited this place in 2010 with my older son Damian and we merely parked and made the quick .4 mile round-trip walk down to the highlight of the park – the beautiful waterfall – and then I carried him back up to the car and we were on our way. 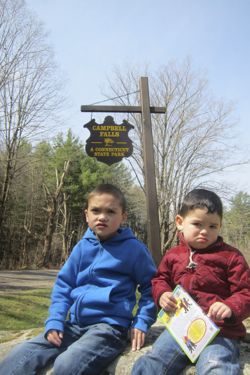 That was great back then, as he was not yet verbal and the idea of actually hiking was simply a ridiculous one. So I sort of re-jiggered that page and put it on the site where it belongs: In the waterfalls section. (You can, and should, read that page here – if only for the cute pictures of little Damian.) It’s a rather different story than the one you’re about to read here, I promise. 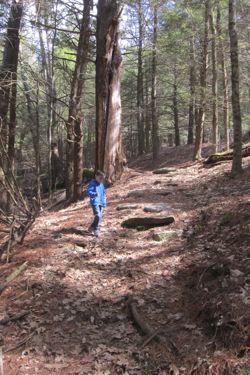 Though of course there is overlap, like these next two paragraphs:

Campbell Falls State Park in Norfolk, CT is the most northern state park in Connecticut. It’s also one of the most southern state parks in Massachusetts. Huh? Yup, check this out: Campbell Falls State Park Reserve was a gift to the State of Connecticut and the Commonwealth of Massachusetts from the White Memorial Foundation of Litchfield Connecticut. The park was placed under protection of the two states in 1923 and special laws were passed in 1924 to authorize the cooperation in care and maintenance of the park. (The two parks are actually not congruous, which is sort of weird I guess.) 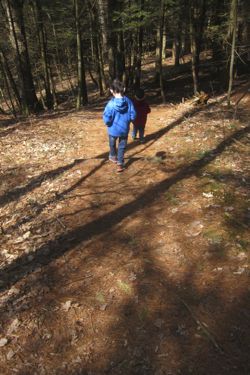 In 2010, I accessed the falls via Campbell Falls Road which straddles the border with Massachusetts. Now, in 2014, I wanted to get (and give to my sons) the full flavor of the state park, so we parked at the “official” entrance a little farther south on Spaulding Road in Norfolk. (This is a road off of 272 a short ways south of the border.)

There is a decent little hiker’s lot there with room for several cars. In theory, 50 cars could park here on the lawn and along the road, but the beauty of Campbell Falls is that no one ever goes there. Its solitude is one of its best attributes. 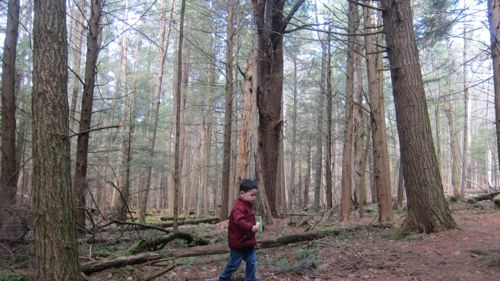 As we began, little Calvin dropped his banana and was not happy about that fact. I suppose I should have waited to take the picture by the sign, but I rather enjoy his sour puss. He really liked that banana, as evidenced by the fact that he carried the dirty thing the entire way to the waterfall.

At which point he gleefully tossed it into the water. Eh, it was a small piece of banana. What am I gonna do? 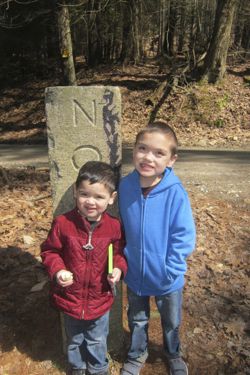 The hike to the falls is only about four-tenths of a mile and it’s flat and easy. There were some wet areas to navigate, but nothing treacherous at all. If you’ve been following along my hikes with my boys, you know that hiking is not Damian’s favorite activity. His developmental delays have always made any sort of physical effort way more strenuous than they would be for a typical eight-year-old.

But something is happening now in 2014 – he’s beginning to enjoy our hikes! Not only that, but he’s sort of starting to care about his efforts as compared to his little brother’s. He wants to take the lead at times, which is just wonderful for me to see. Sure, he’s slow and anytime the ground becomes rocky or steep or wet, he stops and thinks about each footfall. BUT! But he’s moving forward on his own now and not shutting down or demanding I pick him up.

This, my friends, is a huge victory in our world. I love it. (I should note that while the boys were traipsing through the majestic pines of Norfolk, where pockets of snow still existed deep into spring, my wife was at home making authentic macarons from scratch for her mother’s birthday. I have no idea how much time and effort they truly took, but I do now know why they cost so much at bakeries. They are not easy to make.) 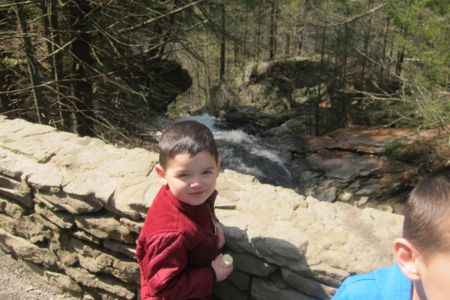 Perhaps Damian’s most impressive feat during this outing was that he only asked ONCE if we were headed back to the car! (Compared to a year ago when it would have been about fifty times.) Calvin, for his part, just bumbles forward almost effortlessly over rocks and streams. To see the difference between the two, and to realize how hard certain “simple” things are for Damian, really makes me proud of him for how far he’s come.

Will he ever hike up Mt. Katahdin? Highly doubtful, but who knows. He signed his grandmother’s birthday card, “Love, Damian” in with a very legible hand this same day. In a moment of reflection with Hoang I said, “two years ago I could not have imagined he’d be able to do this.” Those are the moments being a parent of a special needs kid are pretty darn cool. 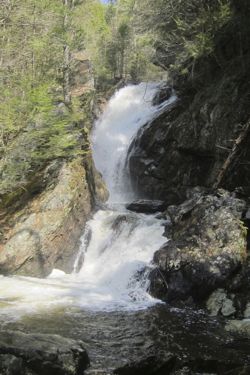 (Calvin’s scribble on the other side of the card was just abysmal. C’mon, kid, get it together.)

Once we reached Campbell Falls Road, where most people park to access the falls, we walked down it to get a view of the rushing water from the bridge above. It’s a cool bridge and all, but the view of the falls is fairly useless.

We took a side trail from the road down to the base and this was probably the first time I put my boys in real danger. A bad misstep – possible for a precocious three-year-old and a kid like Damian – could have resulted in quite a dire tumble down the steep slope to the bottom of the ravine. Fortunately, both boys were cautious and prudent in the descent. (And if Hoang is reading this, I was very careful to hand-hold them down the steepest sections, I promise!)

The falls: They LOVED them. The Whiting River rushes from Massachusetts into Connecticut via a 50+ foot drop. They are loud. The mist sprays off the rocks and creates a scene that would be unique to Connecticut… if they were actually in Connecticut. Alas, the falls themselves are about 100 feet north of the border. Sigh. 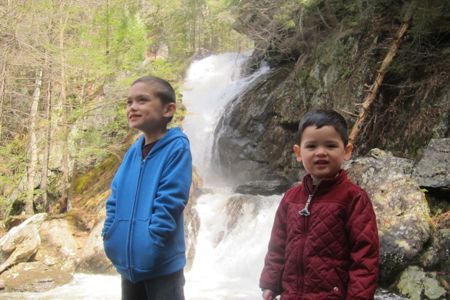 I mentioned the solitude earlier; there we were, three clowns at the base of a beautiful waterfall on a perfect spring day – all alone. While we did see another couple hiking in and as we wove our way back up the trail away from the falls we passed several people heading down (people who were taking the short way in), the twenty minutes at the base of the falls were blissfully ours alone.

(Which meant that no one saw Calvin throw his banana into the stream.)

We walked back the way we came in, to very little complaining. There is something so cute about physically tired little boys though, as Calvin trudged along in silence, each step seemingly weighing him down further.

But they both made it back to the car and immediately started demanding food. Yup, another successful hike with my sons. 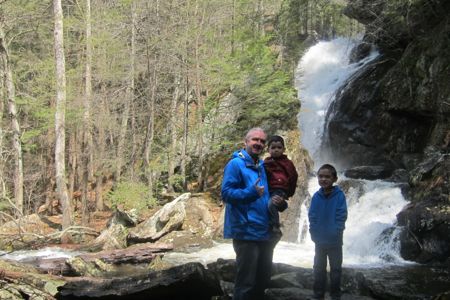 My 2010 page about the falls themselves

Back to CTMQ’s State Parks page