Windsor Locks is, in its own way, one of the weirder towns in Connecticut. Sure, it was once a thriving “port” city thanks to the locks along the Connecticut River that gave the town its name. Today, there stands a mile of empty factory shells that stand testament to those bygone days.

Then it got an airport and the Air National Guard base there. Without that? Oof. 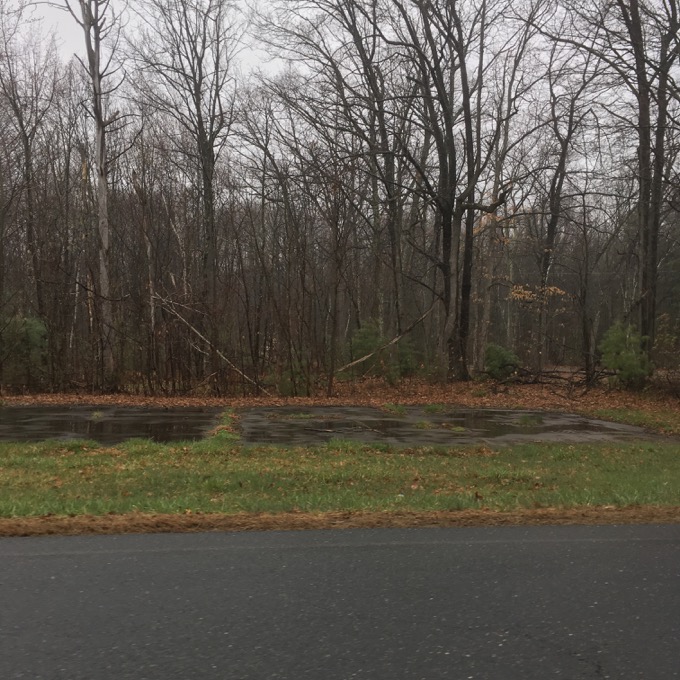 It’s also home to former prisoner of war camps. Dating all the way back to the Revolutionary War, when Hessians were held captive there up through World War II. (You may recall that one particular Hessian prisoner supposedly erected the very first Christmas tree in American history.)

I readily admit my surprise at learning the town was also home to a POW camp during WWII and that krauts indeed were kept there. I drove around the seemingly endless road ringing Bradley International Airport looking for remnants of the camp. I had a pretty good idea of where it must have been, but really… without a historian riding shotgun, I was merely guessing. 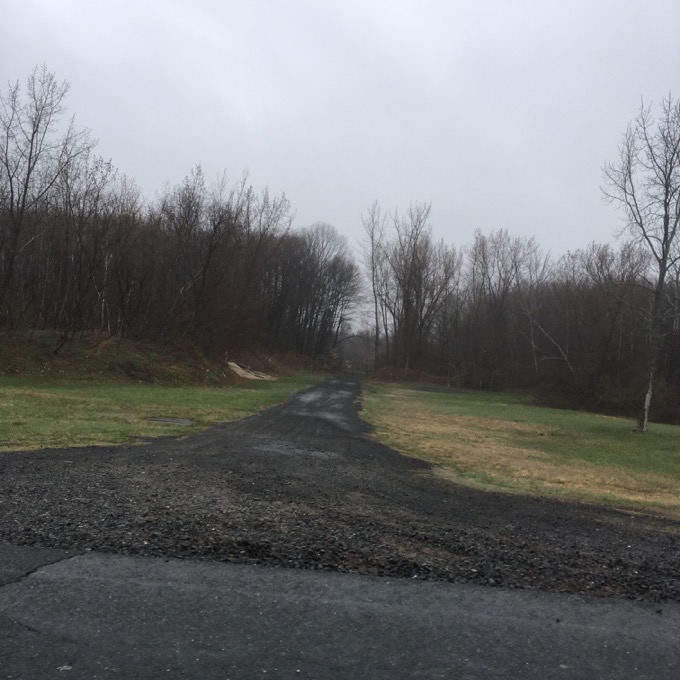 Regardless, I was very close to where the camp was. But since I have no firsthand account of what went on there, I’ll turn to the The Hartford Courant.

It wasn’t widely known at the time — even in Windsor Locks, where Bradley Field is located — that soldiers of the Third Reich had landed there on Oct. 8, 1944. Some 250 Germans would stay for nearly a year.

“No one wanted anyone to know they were there,” says Phil Devlin, who grew up in Windsor Locks and whose father was stationed at Bradley right after World War II. The Germans, of course, were prisoners of war, and Bradley was among about 600 camps throughout the United States that had been set up to detain them. Vermont was the only New England state without a POW camp.

Bradley’s contingent consisted of enlisted men, not hardcore Nazis, and many reportedly preferred being anywhere, even in snowy Connecticut, to being shot at. Some reportedly expressed an interest in staying here after the war was over.

However unsettling in theory, the presence of German soldiers in Windsor Locks was uneventful. By all accounts, they were well guarded and well cared for, and actually had plenty to do, between work and recreation.

They didn’t make any trouble, and there were no reported escape attempts, much less successful ones, as there were at Fort Devens in Massachusetts. An American woman fell for a prisoner there, and the pair made their escape to Nantucket, of all places, where they lived as man and wife for several months. 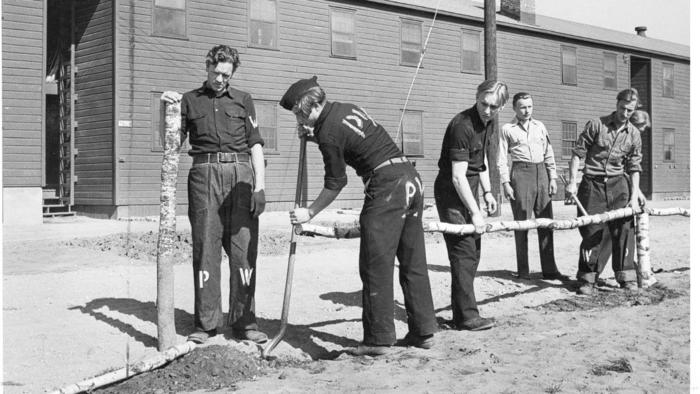 There were some 2,000 escapes nationwide. Most were caught in short order or turned themselves in, but not all: one escapee managed to melt into American society, got married, and avoided detection until 1985, when he gave himself up on network TV.

But Connecticut’s POWs barely made a blip on the state’s radar screen, and most people today are surprised to learn that they ever were here.

“It wasn’t a big deal, they didn’t bother anybody,” recalled William Poggi, 96, who was in the Navy during the war but heard all about the POWs when he returned home to Windsor Locks.

William Casinghino, also of Windsor Locks, was 17 and worked on the base while the prisoners were there, right before he entered the Navy. Now 89, he recalled, “I made a few deliveries to them, inside their gate, once with butcher block for their kitchen. The guards told us how to behave before we went inside the fence, to treat them with respect.” He added, “There was a barbed wire fence; it was pretty secure. They would take them outside to do things on the base, like lawn care.”

The capture of German POWs began with the Allied victories in North Africa in 1943 and got more bountiful as the war progressed. In all, some 380,000 Germans were shipped to the United States along with smaller numbers of combatants from Italy, Japan, and several other nations.

Bradley was chosen because it was then an existing U.S. Army base that was sufficiently isolated from the surrounding civilian population. POWs were not to fraternize with base personnel much less local residents.

“They were treated very well here,” said Jimmy Nussbaum, whose father was an Army sergeant on the base during the war. “He had some of the prisoners on his work crews, he told me.”

They were, indeed, treated well here, arguably better than the requirements of the 1929 Geneva Convention, to which both Germany and the United States were signatories. Prisoners could not be asked to do dangerous or war-related work, and were paid 80 cents a day in script that could be used in the canteen to buy cigarettes, soda, toiletries etc.; the pay was roughly the same as an American Army private received. They were to be properly clothed and housed, and provided the same food and medical care as their captors.

Histories say that the Bradley contingent of POWs cut firewood, salvaged lumber, tidied up the base, and did vehicle maintenance and kitchen duty. In some camps the prisoners were loaned out to local farmers and businesses, for example, to dig potatoes in Maine. The war, of course, had caused an extreme labor shortage nationwide. The 1998 book “Bradley Field: the First 25 Years” by Thomas C. Palshaw states without elaboration that some POWs were let out to Connecticut farmers.

The existence of German soldiers in the state was not a secret for long, at least not to readers of The Hartford Courant. On Oct. 25, 1944, a little more than two weeks after they had arrived, the newspaper ran a story on page 14 with the upbeat headline “Prisoners at Air Base Seem Happy.” The sub-headline read: “Captured Germans at Bradley Field Work, Play, Study and Dream of Home.”

Reporter John C. Perham was given an official tour of the base and wrote that the POWs seemed “tractable, reasonably cheerful and healthy” and “proved most cooperative even eager to have their pictures taken.”

He reported their ages as ranging from 18 to the mid-40s, with the average age being 28, and that their stature was slightly less than that of American soldiers. They represented a cross section of German society: some were barely literate while others had advanced academic degrees.

The article also informed people who wanted to avail themselves of the POWs as laborers to contact the War Manpower Commission, which determined whether a shortage of available local workers justified the request. Perham noted the posted menu for lunch, which the prisoners were preparing for themselves: it included roast beef, sauerkraut, potatoes, vegetables, bread, coffee, and apples. Ach du lieber!

Perhaps the most startling revelation in the article, which was accompanied by a photograph of Germans building a fence around a soccer field, was that beer was included in the prisoners’ rations (3.2 beer, but still…).

Indeed, all work and no play makes for a dull POW. The men pursued arts and crafts, read extensively, used the machine shop, played soccer, studied English, and wrote and received letters from home. Trinity College lent 50 books in German each month to the POWs and the German Red Cross also supplied books, among other things. The men had their own medical clinic, mess, barracks and a chapel, which they built themselves. It offered both Catholic and Protestant services. Their four-acre stockade was set apart in the southwest corner of the 1,700-acre airfield, near where the airport terminals are now.

In an article published in the Courant in 1997, Michael C. White reported: “Carl Erik Wenngren and Helge Westermann, Lutheran clergymen, made inspections of both the Bradley and Westover camps in August 1945. In a report, Wenngren wrote that the canteen at Bradley ‘seemed to be very well furnished,’ and offered for sale German books by Tolstoy and volumes of American art, poetry and plays. He noted that more than 700 books had been sold in the canteen by 1945.”

The report apparently did not specify if “War and Peace” was among the Tolstoy titles.

Phil Devlin remembers hearing from his father that when the war ended some of Bradley’s POWs wanted to stay in this country. Germany, after all, was in ruins. But American attitudes toward its resident prisoners had hardened as reports surfaced about the Holocaust and the poor treatment of American soldiers held by the Germans.

Besides, international law required POWs to be repatriated, and they were. Some were more reluctant to leave than others, especially those whose hometowns had come under the control of the Soviet Union.

Bradley Field was closed as a U.S. Army base in August 1945 and reverted to Connecticut control. In 1946, it became home to the Connecticut Air National Guard. Most of the POW buildings were destroyed by the 1979 tornado.

But the Germans’ stay in Connecticut rippled through history, as Palshaw told this tale in his book:

In 1969, Bill Wilson and George Damato, two Connecticut Air National Guardsmen stationed in Germany, were hiking across the countryside to visit a medieval castle. An irate landowner accosted them and demanded to know who they were and what they were doing on his property. They replied that they were U.S. airmen whose unit was based in Windsor Locks, Connecticut.

“Oh, Bradley Field!” exclaimed the German, who had been a POW there. The Americans had a newfound friend, who proceeded to show them the town in grand style. 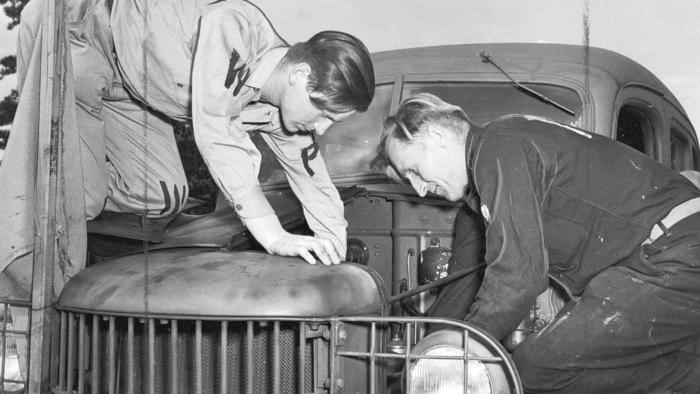