CTMQ > Everything Else > Geography > Campbell Falls

[Note: For my Waterfalls pages, I’m using the town designation used by the Connecticut Waterfalls 2013 guidebook. Because sometimes it’s fun. This one is quite unique because the fall themselves are in Massachusetts, mere feet over the border. More explained below.]

I’ve been to these falls twice and was equally impressed both times. I’m not the first to say that they would be my favorite Connecticut falls… if they were within our border. Alas, they are not… but just barely. You can see and hear the falls from the Nutmeg state, but to feel the spray on your face or to take any decent pictures, you must cross that 18th century-determined incorrect border. 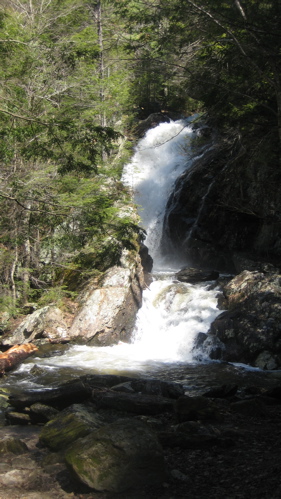 Incorrect in that it was laid too far south. If those early surveyors got it correct, these falls would be ours. Dangit. Fortunately though, perhaps as a small acknowledgment that the Bay State was in error all those years ago, the falls are contained within a Connecticut state park and are supposedly managed by both states. I like to think Connecticut takes care of it – but that the graffiti currently (April 2014) on the granite border stones is the fault of Massachusetts.

I visited first in 2008 with my son Damian. For that trip, we parked along Campbell Falls Road (along the border in Massachusetts) and trekked the short walk down the hill to the bottom of the falls. I’ll just dump that report here for your enjoyment.

In 2014, now with an older Damian and a three-year-old Calvin along for the ride, we hiked the “long” way in from Spaulding Road down in Norfolk, Connecticut. I’ll use that trip report as my page for the State Park itself. You can read that here. (More waterfall pictures and video over there.)

Hm. Now that I’ve deleted my exposition for this semi-new page, I don’t know what to write here to fill the space. This is sort of hard, since I spend so much time explaining how the park came to be and how its uniquely operated today that it going to be difficult to make two distinctly interesting pages about the falls AND the park itself. Oh well, I’m sure that bothers no one other than me. So please bear with any repeated information you’re about to read. 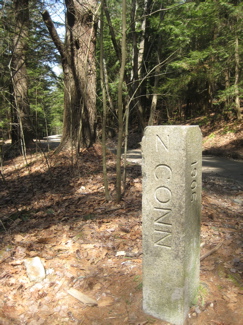 Campbell Falls State Park in Norfolk, CT is the most northern state park in Connecticut. It’s also one of the most southern state parks in Massachusetts. Huh? Yup, Check this out: Campbell Falls State Park Reserve was a gift to the State of Connecticut and the Commonwealth of Massachusetts from the White Memorial Foundation of Litchfield Connecticut. The park was placed under protection of the two states in 1923 and special laws were passed in 1924 to authorize the cooperation in care and maintenance of the park. (The two parks are actually not congruous, which is sort of weird.) 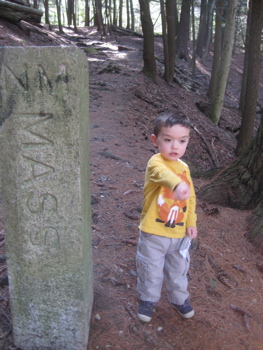 I had to occupy Damian for a few hours on an absolutely perfect April Saturday. And everyone likes waterfalls, right? Right.

Once in Norfolk, we headed north along route 272 which is one of those old tarmac roads – want to learn something random to impress your friends? You’ve heard of “Macadam” roads before, right? But if you’re like me, you didn’t connect the dots between “tar” and “Mac”adam road surfaces. Now you know – anyway, Route 272 is a hilly old road to Massachusetts.

On the way north, look to your left and get some nice views of Mounts Race and Everett (both in MA). 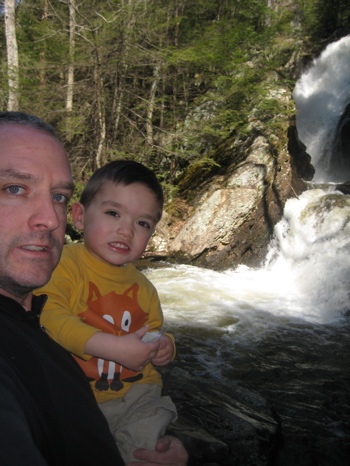 As I’ve already said, you have three choices as far as hiking in to see the falls. One option is to turn left onto Campbell Falls Road off of Route 272 heading north, right at the Massachusetts border and driving all the way to the arch bridge over the top of the falls. From the bridge, you can’t really see all that much of the falls proper, but it’s still rather beautiful and the road is fairly traffic-free. There is a very steep, but official, access trail that goes straight down from the road to join up with the gentler trail near the base of the falls. 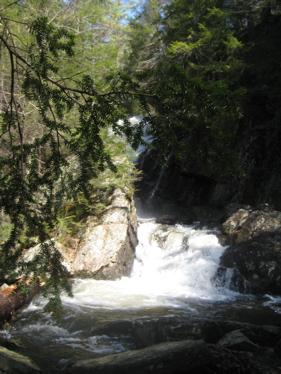 A second option is to park at the little lot closer to 272 and hike the more popular, and slightly less steep trail down to the bottom of the falls. It’s short – only about two-tenths of a mile, so pretty much anyone can do it. Heck, I did it with Damian; you have no excuse.

The third option is what I describe over on my page about the state park. It’s a totally flat hike (until the walk down to the falls) from the park’s main entrance on Spaulding Road and is only about .4 mile in total, one-way.

And that longer hike, through some fairly old growth pine, sounds great… except we didn’t do that in 2008. Remember, Damian may be four but due to his Smith-Magenis Syndrome, I can’t ever depend on him walking very far over rocks and roots. Plus, we had a long day ahead of us (elsewhere), and I didn’t want to wipe him out off the bat. So we took the easier option – the second one I mentioned above. 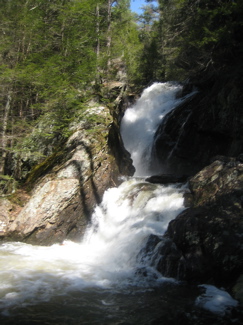 We took the left turn off of Route 272 and onto Campbell Falls Road which is a mere 5 feet across the Massachusetts border. This is not a road you want to drive when it’s icy or snowy, as it’s fairly steep and skinny as it heads down the ravine. I tried that once with Hoang in the car and… yeah. I turned around when it looked like death loomed ahead.

The excitement starts before you even park though. Halfway down the hill, you pass a stone state line obelisk. I love these things – so stately… And now we were back in the comfortable confines of Connecticut. I wouldn’t want to leave my car parked in stinkin’ ol’ Massachusetts.

Damian and I walked down the fairly steep hill, with the roar of the falls growing ever closer. The “hike” is short, but sadly, at the .17 mile mark (give or take a hundredth of a mile), we passed another border marker, bringing us back over into Massachusetts. 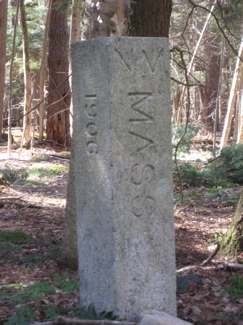 As I’ve said, the actual waterfall is about 100 feet over the border and in the Bay State. The Whiting River, rising in Massachusetts falls over 50 feet before entering Connecticut. The Whiting River literally rushes out of the state of Massachusetts and tumbles into Connecticut; smart water! Again, repeating myself, if the falls were in my state, they would definitely be in my top three Connecticut falls. Sigh… they are not – but they are close enough to include on CTMQ. Obviously. And yes, you can see them from Connecticut.

It’s just like how you can enjoy the Horseshoe Falls part of Niagara Falls from New York, when 75% of the falls are in Canada. Yeah, just like that. (Did you know they stopped the flow over Niagara Falls in 1969? Check it out.)

A total of 100 feet of water cascades down the river, but the main waterfall is probably in the 50 foot range. This main waterfall section is quite a sight to behold when it’s flowing heavily. It’s loud and majestic – you can really feel the power of the water when you’re there on a good day. Mist splashes everywhere and depending on your feelings on the matter and the ambient temperature, that can be pretty fun. 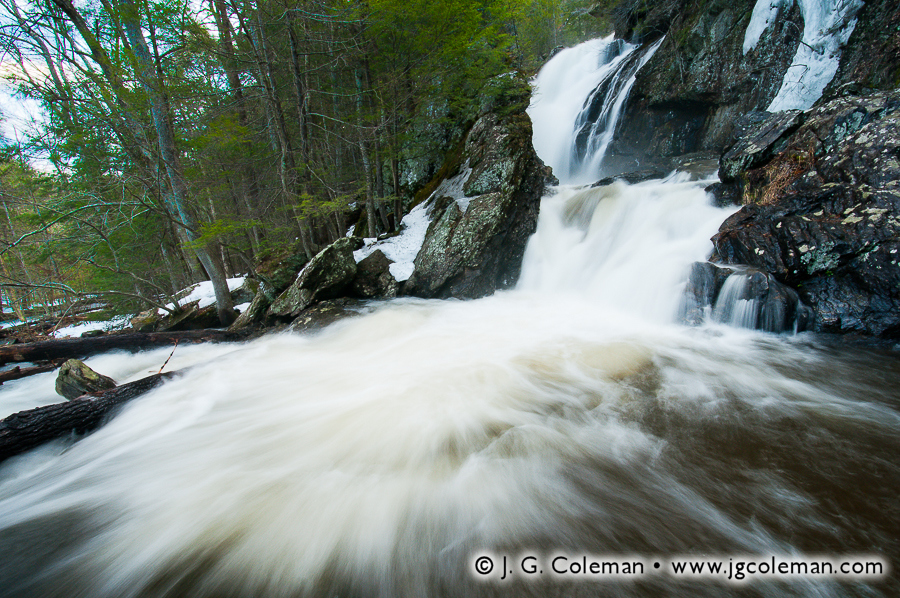 I tire of my bad pictures, so my friend Justin Campbell has allowed me to show off his.

They were too loud for Damian, it turns out. Granted, the area just suffered some epic rains about a week prior, so the falls were particularly impressive during our visit. Damian wouldn’t let me put him down, even though he really enjoyed watching the waterfall. They mysteries of my child….

[Almost exactly four years later, Damian still said they were “too loud,” but he had a much better time at their base with his little brother. You should still click over to the state park page, if only for more pictures of my brood.]

It was no mystery, however, why he wanted me to carry him back up the hill to the car. Punk. 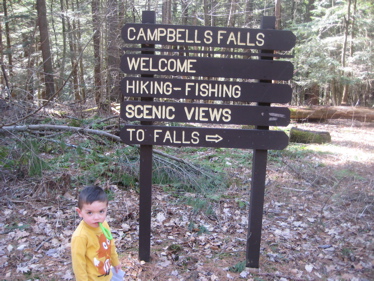 Accessibility: Short and fairly steep down and up, totally less than half a mile if you park at the trailhead. OR, you can park across the state park and make the .4 mile trek in from the small parking lot.