[Note: For my Waterfalls pages, I’m using the town designation used by the Connecticut Waterfalls 2013 guidebook. Because sometimes it’s fun. Like now… because as you all know, Stevenson is a section of.. Of Monroe? That’s the only Stevenson I can find, but who knows. Such are the vagaries of Connecticut town naming conventions. Anyway, these falls are in Oxford near Jackson Cove Town Park.]

These falls are included in the new (2013) Connecticut Waterfalls guidebook, so I’m adding this page a year after visiting. And since I’m lazy, I’m not going to go find the CD that contains the original pictures to give you the lovely giant waterfall picture you so richly deserve. Sorry. 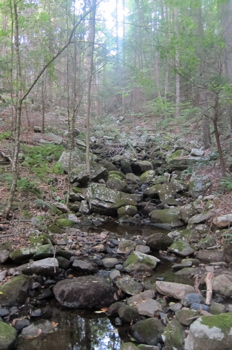 And as you can see, the “falls” were rather dry during my visit.

You have a couple choices as to how to approach these falls. I would recommend the long way, from the southern terminus of the Pomperaug Trail. From there, it’s probably a little over two miles up to the falls, but it’s a lovely two miles, up on the ridgeline above the Housatonic.

There are several nice outlooks along the way and it’s just a fun couple of miles out in the woods. If you can’t swing the longer hike, you can park at Jackson Cove Town Park in Oxford and head south along the trail. The guidebook states that you, as a hiker, can avoid the whole “residents only” rule of the park somehow, and I’m inclined to believe it. I parked here once at dawn in January, so I have no “normal people” experience with it. 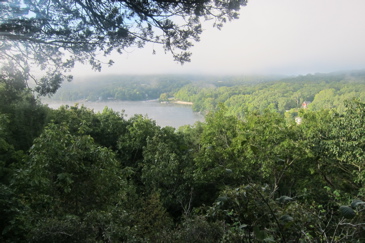 View near the falls

If you do this, finding the trail may be a bit of a challenge. Here’s what I wrote on my Pomperaug Trail page:

The trail climbs in earnest for a few minutes, as if to purposely get away from the summer crowds and up to a spot that only people who WANT to hike the trail will hike up to. The Pomperaug crosses a bunch of brooks and creeks and rivulets. This southern section of the trail would not be fun after or during a heavy rain. There are no bridges and some of the brooks I crossed looked like they have the potential to be fairly serious when they wanted to be.”

Even though they were dry during my hike, they are still pretty and afford the hiker a nice little challenge.

In the end, the real challenge will be for those guidebook readers who go to Stevenson instead of Oxford. Good luck to them.

My hike of the Pomperaug Trail