As I’m sure you’ll be racing out to experience this tiny town green for yourself, it’s right off of exit 18 along Route 2 where 85 and 16 come together. All kidding aside, the reason for this being on the Freedom Trail is surprisingly important. 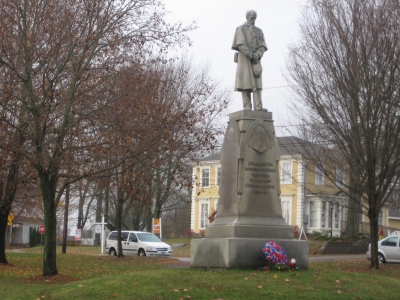 This is the Civil War monument at the western end of the green.

During 1803-1804 the “Old District School House for Colored Children” was established behind the Congregational Church near Colchester’s town green, predating any other attempt in Connecticut to provide educational opportunities specifically for African American youth. Although racially segregated in that white children attended a different district school in town, the African American school was nonetheless famous throughout the state for the uniqueness of its mission. It attracted students from outside the bounds of Colchester.

One of its graduates was Amos Beman, who was later associated with Hartford’s Talcott Street Congregational Church and New Haven’s Temple Street Congregational Church, both of which are included on the Freedom Trail. The school closed in 1848 as its students found acceptance at Bacon Academy and other local schools. While no longer extant, the school is depicted in the sketch of Colchester’s green in John Warner Barber’s Connecticut Historical Collections (1835).

Just up Route 85 from the town green is this house. As you can see, it is currently getting a facelift. While this site’s inclusion on the Freedom Trail is very different than the town green’s, it’s still very interesting nonetheless. 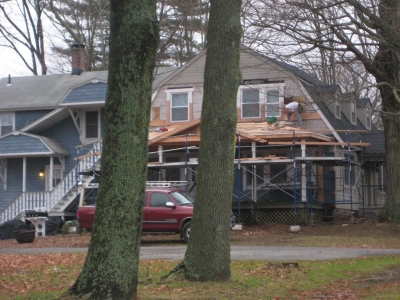 Lyman Trumbull, a grandson of Benjamin Trumbull, was born and reared in this house, which is still on its original site. Later a United States senator from Illinois, Lyman Trumbull was one of the founders of the Republican Party and in 1865 helped author the Thirteenth Amendment to the United States Constitution that ended slavery in the nation. The house is included in the Colchester Village National Register Historic District.

Sorta like how another recently elected Illinois Senator who wasn’t born in Illinois’s Hawaiian home will be on some sort of “Trail” 100 years from now.