2019 Update: Daniel’s Dairy Downtown has closed. It’s sister shop, Michael’s on the Mitchell College Campus is still open in 2019, but no longer serves Connecticut made ice cream. But I’ll keep this page for historic reasons.

I was going to title this, “I’d like a Double D Cup, Brah” but figure (and hope) the current slang “brah” meaning “bro” meaning “my friend” will have disappeared soon and therefore rendering the title completely nonsensical and obsolete. 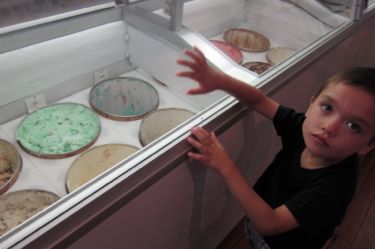 It is a good one though. The title, not the stupid slang word.

Besides the title pun, I’m not sure why I’m bothering with this page. For you see, the business minds behind Daniel’s Dairy Downtown no longer make their own ice cream. And no, it’s no longer made across New London at Michael’s Dairy either, as many assume. In fact, if my sleuthing and my inside sources are correct, Daniel’s is now wholly independent and gets their ice cream from Bliss in… in… I’m finding it hard to say… in Massa –errch. Massa-bleechhh. Massachuuu-urp. 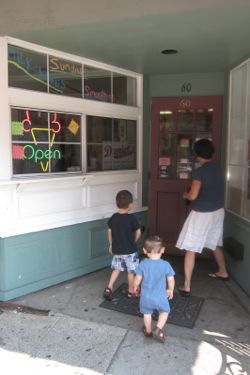 Therefore, this place no longer qualifies for my already-too-big list of Homemade ice cream joints around Connecticut.

So why bother with it? Especially since the pictures of the boys are nowhere near as cute as they often are? Heck, I don’t even have a Calvin picture, so I’ll throw in this one, taken the same day: 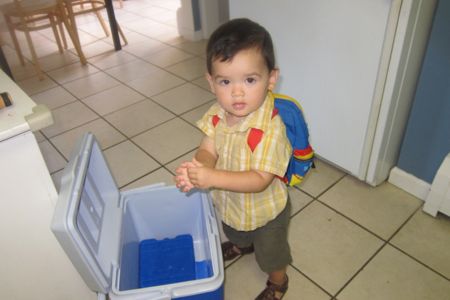 I don’t know. Maybe just to expose Daniel’s for what it is. And maybe to point out that they have this sort of creepy machine that “makes” your flavor right there, which I don’t find the least bit appealing.

While they have great lineup of Massachusetts hard ice creams, made terrible only by their provenance, they offer a TON of soft serve flavors. How do they do it? They have a vanilla base (or perhaps a non flavored base of some sort) to which they add a bunch of flavoring juice/gel/goop to and mix it up and voila! 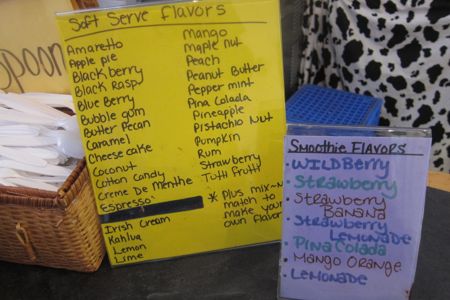 Pumpkin (or whatever) ice cream!

Just not my thing. 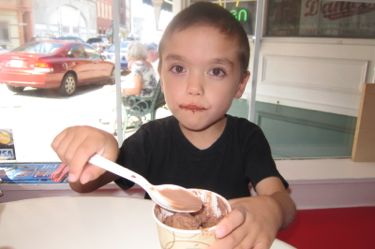