2019 Update: No, this wasn’t the 434th museum I visited. It was somewhere around the 175th. But I decided to roll these post-closure “visits” into my general Museum Visits list so I have one less list to worry about. I figure with the defunct visits, it doesn’t really matter whether I visited in 2012 or 2019, y’know?

More importantly, this place is rising from the dead and the Danbury Historical Society is rehabbing the building to be reopened someday! I wrote this in 2012 when it was decidedly defunct. I will update it should the need arise. 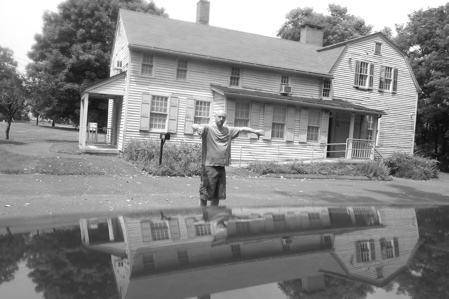 I am a little hesitant to pronounce this place dead just yet, so let’s call this venerable museum more of a zombie than a corpse. Or is a zombie officially a corpse anyway? I don’t know… I’ve never really been into the whole zombie/vampire nonsense that infects the Internet like, oh I don’t know, the blood sucking undead. (Note: Shaun of the Dead and Zombieland were both excellent movies.)

Every couple of years, when I edit my giant list of CT museums, this was one of the 20 or so that I never knew anything definitive about – owing to its zombie status, yes, but also to the fact that it used to be and/or also is called The Scott Fanton Museum. The Danbury Historical Society always listed it/them, but never gave me much to go on. So imagine my excitement/sadness when I happened to drive by the old house with Damian one day on our way to something else.

I should note, although Danbury is probably the most difficult town in Connecticut to navigate, I was on Mountainville Avenue for a reason.

The Danbury Museum and Historical Society was formed in 1947 as the result of a merger between the Scott Fanton Museum and the Danbury Historical and Arts Center. During the late 19th and 20th centuries, John Fanton, a Danbury industrialist and prominent citizen, and his second wife, Laura Scott, traveled extensively through Europe, Asia, and the Americas and collected artifacts from each country they visited. In 1921, after their deaths, a museum was opened in the Fanton home on Deer Hill Avenue for the purpose of exhibiting these collections. 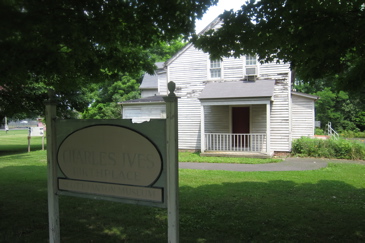 I don’t know what the Fanton/Ives connection is (comments below attempt to clear it up), but can we assume they both lived in this same house? A house which, by the way, has been moved to three different locations around town and now sits behind Rogers Park Middle school. In recent years – I think within the last two – a series of interpretive signs surround the house and give visitors a great synopsis of Ives’s life and work. It’s pretty darn cool that these signs were created… keeping the idea of it being a museum very alive.

The house is a mess; with a caved in ceiling and no wiring and who knows what else. It is estimated that it would take a million bucks to restore it to be an awesome museum, drawing international visitors interested in Ives’s early life. I wish them all the luck in the world, as Ives is easily one of the most important American composers in history.

Charles Ives was an American modernist composer. He is one of the first American composers of international renown, though Ives’ music was largely ignored during his life, and many of his works went unperformed for many years. Over time, Ives came to be regarded as an “American Original”. Ives combined the American popular and church-music traditions of his youth with European art music, and was among the first composers to engage in a systematic program of experimental music, with musical techniques including polytonality, polyrhythm, tone clusters, aleatoric elements, and quarter tones, foreshadowing many musical innovations of the 20th century.

And yes, that last – and all of the following paragraphs are from Wikipedia so don’t expect me to have any idea what any of it means.

The former museum is a wooden frame structure built in 1780 and expanded on since. Over the course of the 19th century it was the residence of several generations of Iveses, a family important in the city’s history. In 1874 it was the birthplace of Charles Ives, who became an internationally recognized composer in the early 20th century. 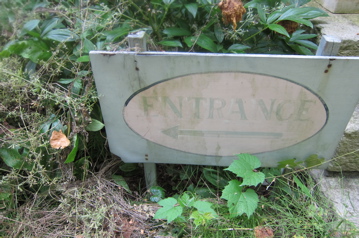 Charles Ives was born in the house in 1874, while it was still located at 210 Main Street. While he was still in early childhood his family moved to Stevens Street, but they came back for frequent family occasions, which often included playing classical music on the piano. Even after he went to Yale University and lived in places other than Danbury for the rest of his life, he often returned to the family home. In 1924 the front dormers were added, the year the Iveses moved the house to Chapel Place, just behind the first site, so the Danbury National Bank could expand. Charles and his brother also felt that, in a neighborhood that was by then heavily commercial, it had lost the aura that had helped inspire his music.

Ives still visited the house frequently over the rest of his life, even after he gave up composing and moved to nearby West Redding, where he died in 1954. It is the only extant former residence of his that is connected to his musical career, since the two houses where he lived in Hartsdale, New York, during most of his productive years are no longer in existence. After his death his sister-in-law remained in the house until her death in 1964. 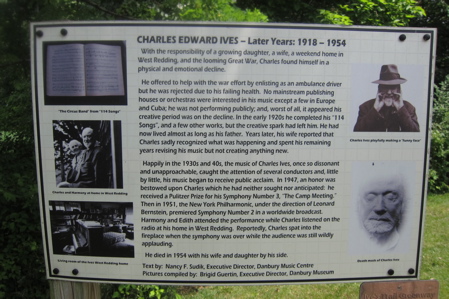 Three years later, in 1967, another bank, Fairfield County Trust, wanted to expand the parking lot the house was adjacent to. The bank conveyed the house to the Danbury Historical Society, which bought a 14-acre site south of Rogers Park and moved it to Memorial Drive, since it was too small to be added to the museum’s existing property at the John Rider House. It was moved for the last time in 1971, four years later, when the local school district wanted to build Rogers Park Junior High School. To facilitate this move, the schools leased the eastern seven acres from the museum for 99 years with an option to renew.