Note: This page appears over on my Satan in Connecticut! section, so it takes on a different flavor.

As if the whole Hell Hollow story wasn’t enough (Here), I set out for the same evil area a month later in order to pick up some miles on the local CFPA Trails (Pachaug and Quinebaug) as noted just above. I didn’t even realize that after parking my car at Hell Hollow Pond on Hell Hollow Road, I’d be passing by a Devil’s Den after hiking into the woods for a few miles! Imagine my excitement! 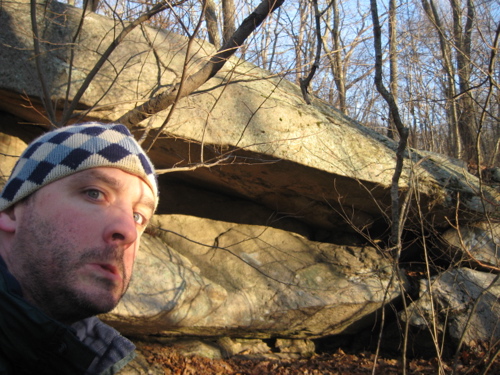 When I think of “Devil’s Dens” (there are 4 or 5 in the state alone), I think of the idiom “Den of Iniquity” which is more or less defined as “A place of immoral behavior, usually of a sexual type.”

Now, I can believe that the local kids may traipse out here on Friday nights to engage in such activity, but the name derives from something else entirely, from this wonderfully FACTUAL site – something that not common with such subjects: 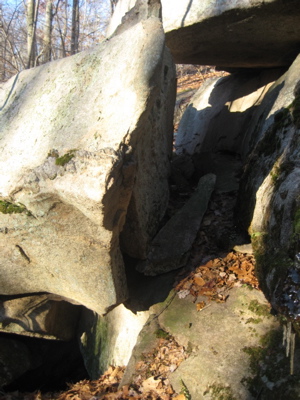 A rock formation known as “Devil’s Den” can be seen northeast of Hell Hollow Pond, on the southwest side of the dirt Flat Rock Road on the Quinebaug Trail. The formation exists beside Hell Hollow Brook and includes a shallow cave-like feature… Rock formations are often fancifully associated with the underworld.

Indeed they are. In reality, this Devil’s Den is pretty weak. Other very nearby rock formations are actually cooler – the ancient streambed that forms the sort of road now called “Flat Rock Road” as well as a nearby lookout with a random glacial erratic serving as a nice bench to sit and relax upon.

There are a couple little overhangs that may keep your cat dry in a rainstorm, but not much else. There was no graffiti and no trash here, which was definitely a nice surprise since access is pretty easy from a nearby road.

Just a quick note on this den – it’s gone.

The Plainfield “Devil’s Den” should not be confused with the large “Devil’s Den” cavern which existed near the village of Oneco in Sterling, Connecticut; it appears that the large cavern was destroyed by granite quarrying in the nineteenth century. Boy, don’t they know the consequences of such actions?

Much more here, if you’re interested. They call it the Devil’s Den Chimney. After all… every den needs a fireplace and therefore, of course, a chimney.