If you’re reading this, you likely know that the humble shad is Connecticut’s state fish. You’re probably aware that shad runs in the Connecticut River used to support a huge shad industry. And you may have even eaten shad or its roe.

(Growing up, I think one of my dad’s favorite special dinners was shad roe.)

Shad is celebrated here and there still; Windsor’s annual Shad Derby springs to mind as does the wonderful little Haddam Shad Museum. (Our visit.)

But the Queen shad event may be the annual shad bake put on each June in Essex by the local Rotary Club. This event has been going on for about 60 years, and it has grown each decade. It has moved down the street to the grounds of the Connecticut River Museum since we visited. Yankee Magazine has called it one of the “Top 20 Summer Events”. 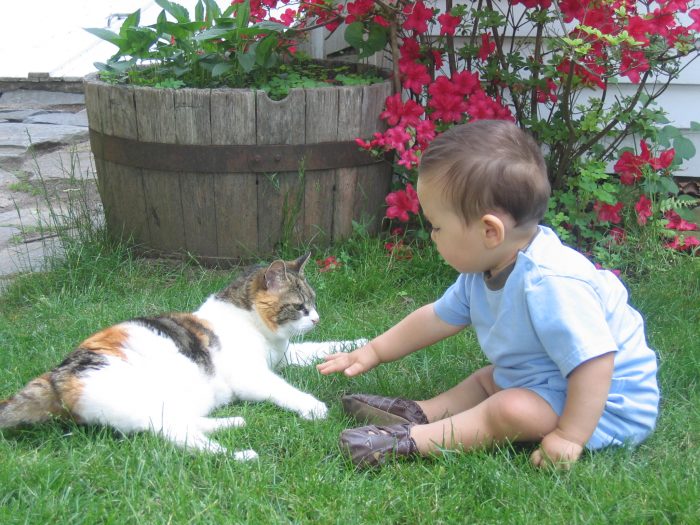 Hoang, Damian and I attended the Shad Bake in 2007. But, for some weird reason, I have no pictures of the actual event. (Back then, I never thought to document anything other than museums – and we also visited one of them that day too, the Pratt House Museum.

But I did take a bunch of pictures of 17-month old Damian with a cat. So that’s what you get. 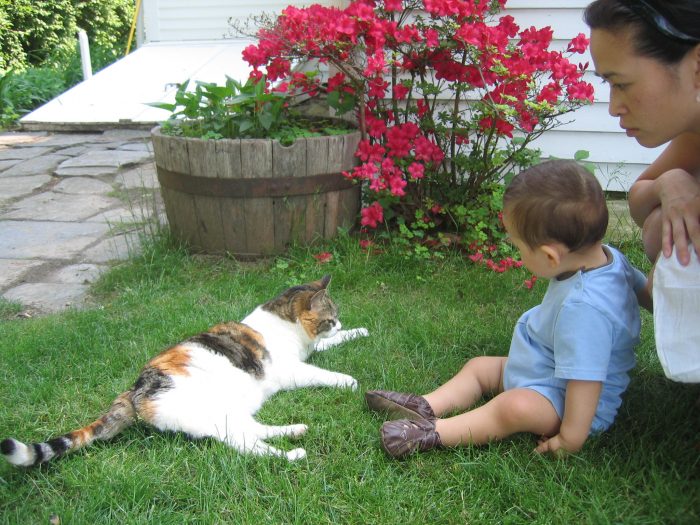 The shad is prepared “traditionally” in that it is baked around a huge fire pit. It’s a whole thing. Personally, the deboning demonstration is the most interesting part of the day. 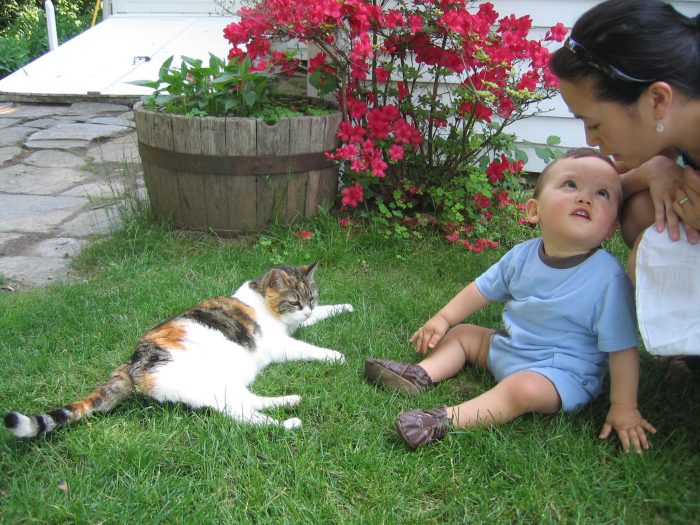 As the catch dwindled, the number of people who knew how to bone the shad dwindled. It is a very, very difficult fish to fillet. I worked for years at an impossibly popular seafood store and pretty much know all there is to know about shellfish and fin fish. I can fillet anything… but was always kept away from the shad.

Except I have tried. Shad have approximately 43 billion bones to remove. There are very, very people who can do this properly today, and it’s cool that a few show up in Essex each June. 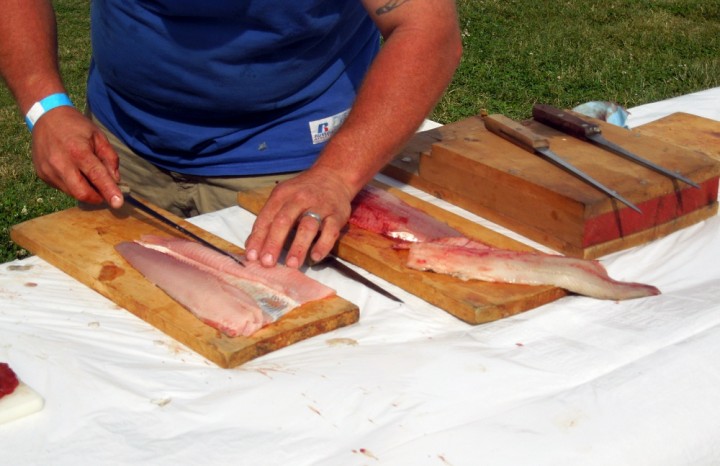 Preparations include nailing the shad fillets to rough-hewn oak planks, using common roofing nails. Strips of salt pork are affixed to the top and bottom of each fillet, which adds flavor during the cooking process. Each fillet is seasoned with olive oil, paprika, and other spices.

I’m guessing the Native Americans didn’t have paprika or olive oil, but when the early white people came to town, they probably added the salt pork. Unfortunately, that salt pork kept Hoang away from enjoying her $30 shad dinner. Oh well. 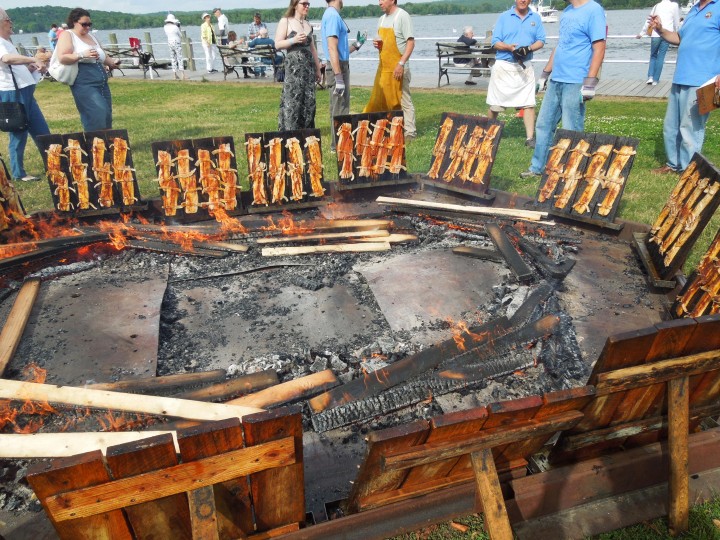 The planks are then positioned in circular fashion around the scorching fire, and the fillets slowly bake for fifteen to twenty minutes in the searing heat.

When a batch of fillets are ready, a call of “Board!” goes up from one of the Rotarians. The finished shad planks are pulled away one-by-one from the fire and taken to the nail-removal station.

At the nail-removal station, a pneumatic tool normally used by carpenters and roofers pulls out the nails while a Rotarian holds the cooked fillets in place using specially designed spatulas. 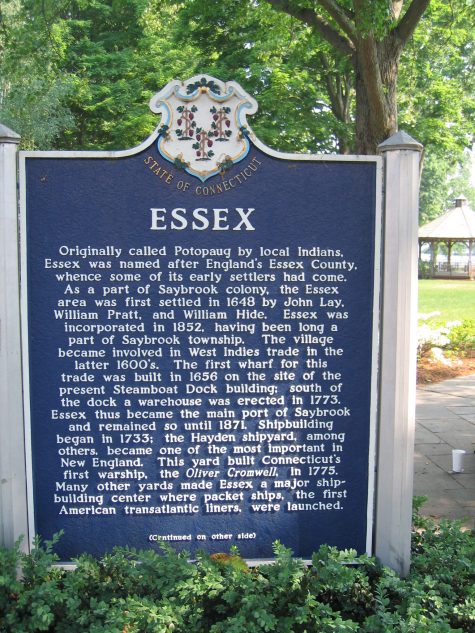 There is other food available like chicken and hot dogs and potato salad and such, but really, if you go to the shad bake – and you should! – eat the shad. Set in a beautiful small town with a rich nautical history eating the state fish prepared in a traditional way with a bunch of relatively wealthy white people while watching yachtsmen come and go.

I’m not sure I can think of anything more Connecticut than that. 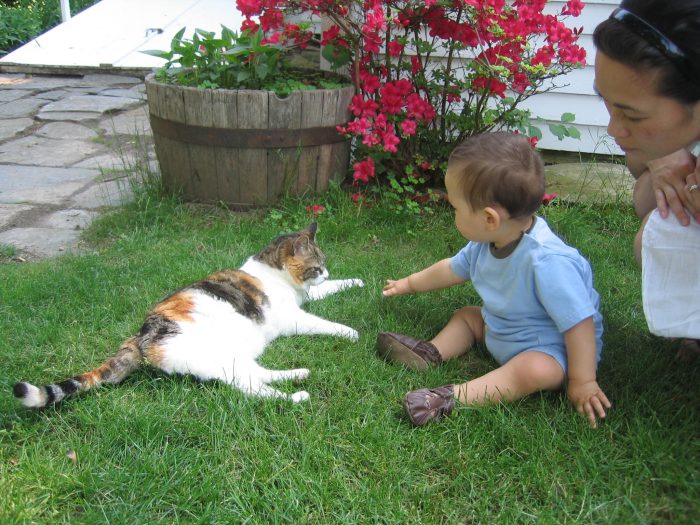