Arrgh! This is (yet another) one of the pages on this website that make me crazy when it comes to placement. It’s not a museum, but it’s so much more than a farm and has such an interesting history – and future potential – that its borderline. This stuff makes me (and only me, I know) nuts. 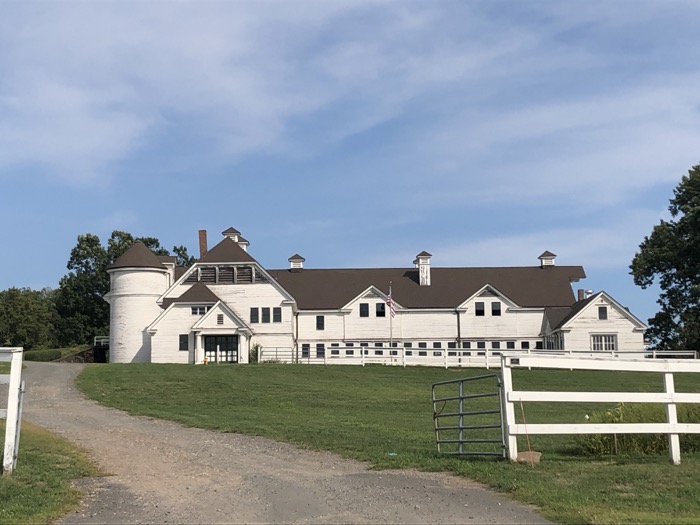 Anyway, after spending a week out in Rhode Island, we had one more day of traipsing in us so we went north up to Suffield’s Hilltop Farm Fest on Labor Day. I knew a few things about the farm before we visited, but I didn’t know this event was so well attended. It was pretty darn packed, but not insanely so. We even ran into friends from Canton – all the way up here in Suffield at a Farm Fest. 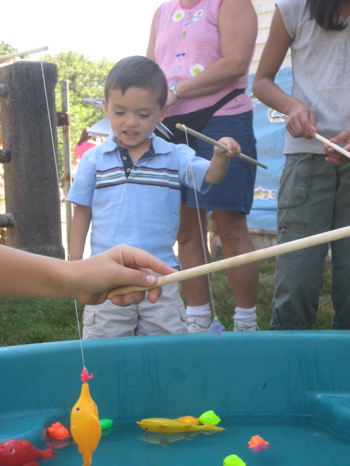 There are a lot of activities for the kids at this annual event, so Damian was actually pretty content the whole time we were there. The only time he got angry was when his dad wanted to check out some of the historical displays and such. I know, right?

Hilltop’s website is pretty informative and fairly well-designed, so let’s see what they have to say about themselves. Like I said earlier, there is a rather unique history to this place:

The northeast corner of Suffield has a long farming history dating to the 1600s. Early settlers recognized the rich soils as well as protection from attackers afforded by the area’s location on a steep rise high above the Connecticut River. Many generations called this corner home, including the Sykes/Sikes family, a notable Suffield dynasty with ties to the early settlers.

Okay, that wasn’t so exciting. But this picture of Damian on top of a dirt mountain is! 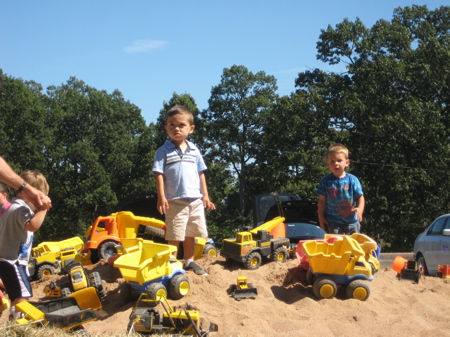 NOW let’s get to the cool part, which if you came here to read about a farm you’ll hopefully by happily surprised:

From 1913-1925 George Hendee, of Indian Motorcycle fame, purchased 24 parcels in this corner of town and created Hilltop Farm. Hendee’s holdings ultimately totaled 500 acres, a good-sized operation in the Northeast for the early 20th century. Hendee lived at Hilltop until 1940 when ill health forced him to sell. 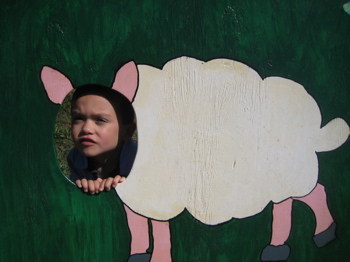 To some people, George Hendee is an icon. Indian Motorcycles are revered by the people who revere such things, and it’s pretty neat to learn that he started this very farm. To their credit, Hilltop does indeed have some historical displays set up about Mr. Hendee and it’s the stuff like that that drive me to think about this place as sort of a museum. 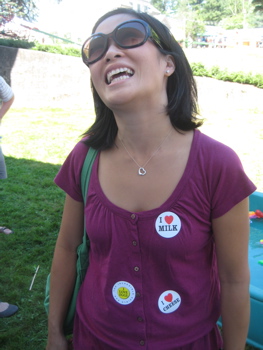 He’s so important that I will now write a bit more about him, again from Hilltop’s website:

In 1897 George Mallory Hendee, a former highwheel bicycle champion, founded the company that would later launch the Indian motorcycle. Introduced in 1901, Indian was the first commercially successful, gasoline-powered motorcycle in the U.S. The company was known as Hendee Manufacturing Co., until 1923 when it was renamed Indian Motorcycle Co. 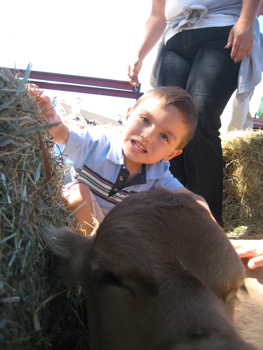 Hendee was a prominent figure in bicycling, holding positions in local, state and national organizations. He also sponsored racers and races, which lead to his interest in developing a motorized pacing bike.

In 1900, Hendee met engineering wizard Carl “Oscar” Hedstrom and witnessed the superior performance of Hedstrom’s pacer. He recognized the commercial potential of the bike for the general public. In January 1901 Hendee recruited Hedstrom to join his company in Springfield, Massachusetts as chief designer and engineer of a “motorized bicycle for the masses.” 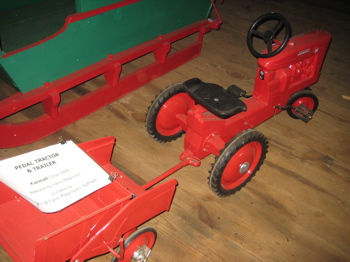 In May 1901, the Indian prototyple was successfully tested on a steep hill in Springfield. Hendee Manufacturing eventually became the largest employer in Springfield with 3200 employees. Despite competition from 200 other motocycle brands, by 1913 the company was the largest motorcycle company in the world with annual production of 32,000 units.

Hendee stepped down as president of Hendee Manufacturing in 1915 and as chairman in 1916 and retired to his 500-acre Hilltop Farm and 17-room Hilltop Manor. He raised a prized herd of Guernsey cows known as Hilltop Butterfats, which became well-known throughout the cattle breeding industry. He also established a model poultry plant for the breeding of white leghorn chickens. Hilltop Farm became an important producer of milk, dairy and poultry products.

During WWI, Hendee was the volunteer postmaster of the YMCA in France and oversaw delivery of mail to troops in the front lines. 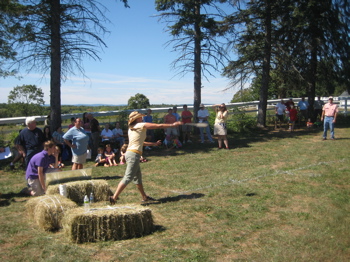 Hendee, a noted philanthropist, was instrumental in bringing a Shriners Hospital for Crippled Children to Springfield, Massachusetts, in 1925. He generously supported many other Springfield organizations.

After many years of failing health, Hendee died in 1943 at the age of 76. He and his widow Edith Hale Hendee had no children. 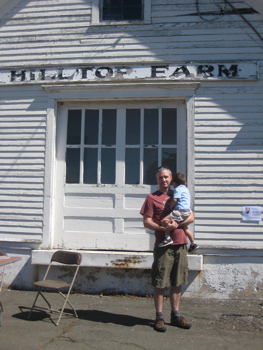 You see? I told you this farm had a cool and somewhat surprising history. Since Hendee’s death, the farm was then owned by a prominent attorney named Charles Stroh and upon his death, the land was divided up among the town of Suffield and some private owners. 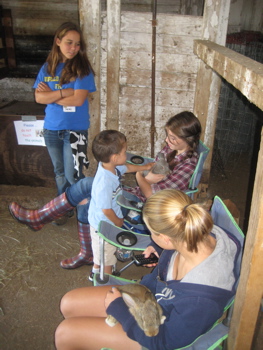 Today, ownership is a bit of a confusing mess with bits and pieces owned privately, some owned by Suffield, and the “important” chunk is leased by the Friends of Hilltop Farm from private owners – including the massive so-called “Monster Barn.” Construction of Hendee’s signature dairy barn, a landmark in Suffield and “one of the finest in the state,” was completed in 1914. It boasted modern and sanitary features, many of them operated automatically. This thing is a mammoth 20,000 square feet. 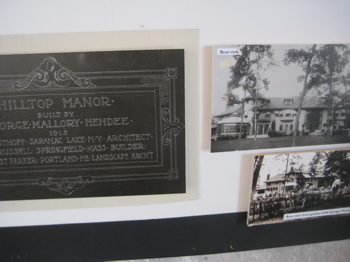 It’s also really quite beautiful and I had fun poking around inside, finding some hidden treasures in various nooks and crannies of the place. There were some old toys displayed here as well as stuff like an old icebox. It was pretty random, but this place is a bit of a work in progress. 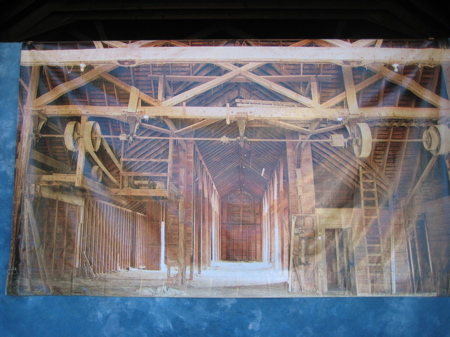 Meanwhile, Hoang and Damian were busy enjoying the Farm Fest; food, skillet tossing contests, little mazes for the little ones, “milking” stations, baby calves to touch… Pretty much everything any family would want from such a “fest.” 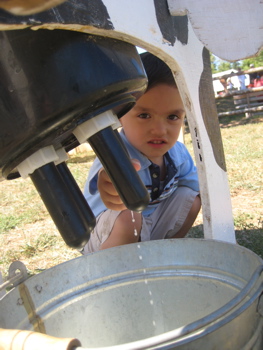 Heck, there was even a little kid “tractor parade” that preceded an adult tractor parade which was, well, it was exactly what it sounds like. A parade of tractors. While they do that and you look at more pictures of Damian doing that stuff, here’s a bit from a 1914 Springfield Homestead article about the farm and barn as it was being built.

“Noticeable from the roadway is a great white barn calculated to be sufficient for a farm of considerable scope and dimensions. The two great towers bordering the entrance are more than ornamental however; they’re silos and of prodigious capacity. The rest of this main floor is given up to hay storage and for farm wagons and implements. It could also store a locomotive or a whole train of cars, for it is mammoth in size. The ground floor reached from the lower level is done off in concrete and plaster and there is room for a “tie up” of an army of cattle. Off to the left of this good old-fashioned barn is a hen emporium with countless runs for thousands of biddies.” 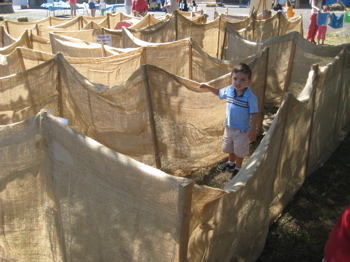 It’s true, I just wanted to get to that word: “biddies.”

Lastly, I wanted to share the vision of the Friends of Hilltop, bolding mine: “We see a vibrant learning center at Hilltop operating year round with summer camps, school group visits, seminars and special events. We see gardens, crops and classes. We see meaningful and fun programs on farming, gardening, architecture, photography, history, nature and caring for the land.

We see young and old and in-between. We hear laughter. And we see people coming back for more.”

So you see, Hilltop is hoping to one day be even more of a museum-like place.

We had a grand old time at Hilltop Farm and whether or not you have little kids, you probably would as well during their annual Labor Day weekend Farm Fest. Then we went to Collins Creamery in Enfield on our way home. 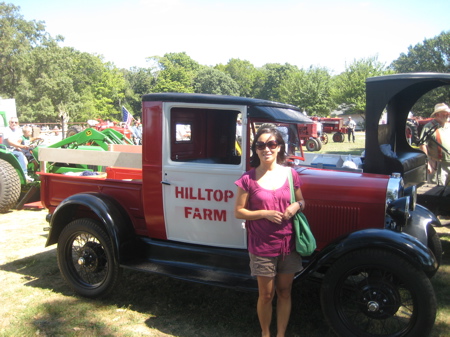