In October of 2016, The Hartford Courant’s Peter Marteka wrote,

Horse Guard State Park Scenic Reserve is one of those [astericked, as in overlooked] places. But after what I saw on my visit, it easily moved into my “Top 10 list of Connecticut State Parks You Should visit” — asterisk or not. Maybe everyone in Avon already knows about this place. But I doubt it because you really have no idea a place like this exists in a highly suburban and commercial area of town. 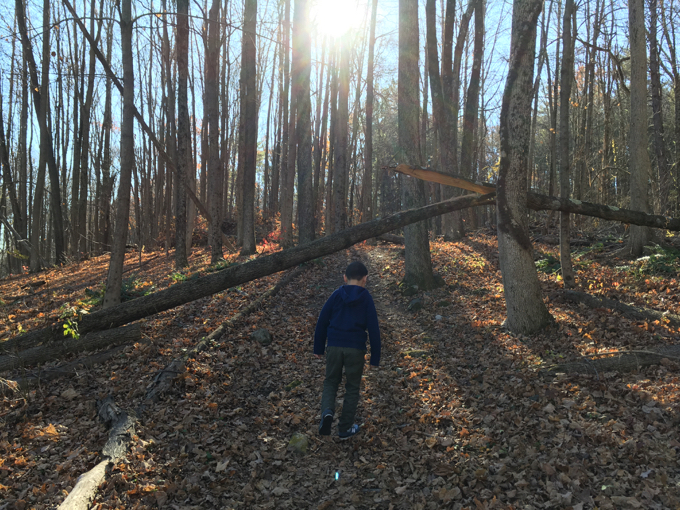 Visitors to the park will find no signs announcing the park’s presence. The closest thing to a trailhead is the circa-late-1700s Derrin House owned by the Avon Historical Society. The entrance to the trail, once you park near the red clapboard house, is denoted by a yellow and blue logo of the First Company Governor’s Horse Guards. The state park gets its name from the oldest active, continuously mounted cavalry unit in the United States, a group that dates back to 1788. Visitors to the state park can see the company’s horses frolicking and galloping in the fields across Route 167. 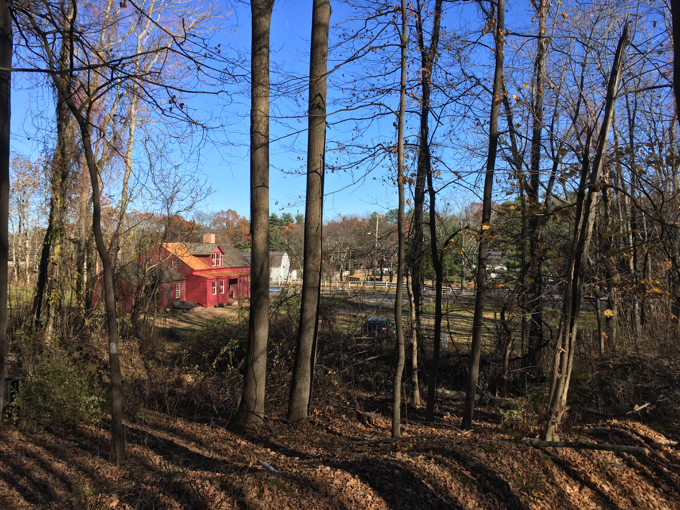 I happened to visit and hike the park myself a mere three weeks later. Marteka’s article didn’t exactly bring the crowds, and I’m fine with that. But something did happen in the years since… Again, 2016 Marteka:

So flick that asterisk away from Horse Guard State Park. Get rid of the “scenic reserve” designation. Put up a sign. Construct a decent trailhead with an online map.

I can report that in 2019 there is a sign, a decent trailhead, and an online map. Considering this place has been a state-owned parcel of land since 1964, I think we can all agree that it’s about time. 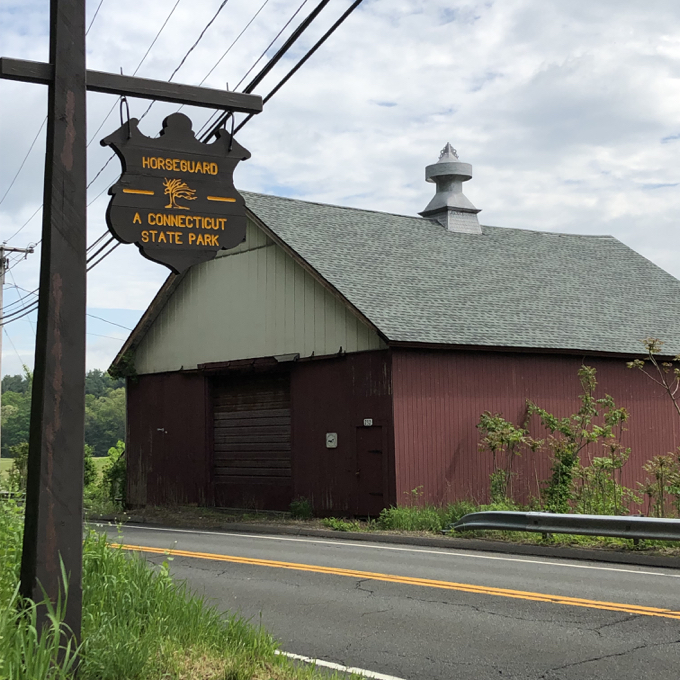 For Marteka is right – this is a beauty spot. One worthy of anyone seeking resplendent views with minimal effort. Connecticut has several of these, almost exclusively along the Metacomet Ridge that cleaves the state in two. For my purposes, this at least allows me to take Damian up a hill in the hopes that he’d appreciate a nice view.

Flashing-forward again to 2019, Damian’s hiking days appear over, as his disabilities simply disallow him to walk even a mile in the woods anymore. So when I look back at days like this, I grow a bit wistful. Not that this hike was without its problems, but at least we made it through. 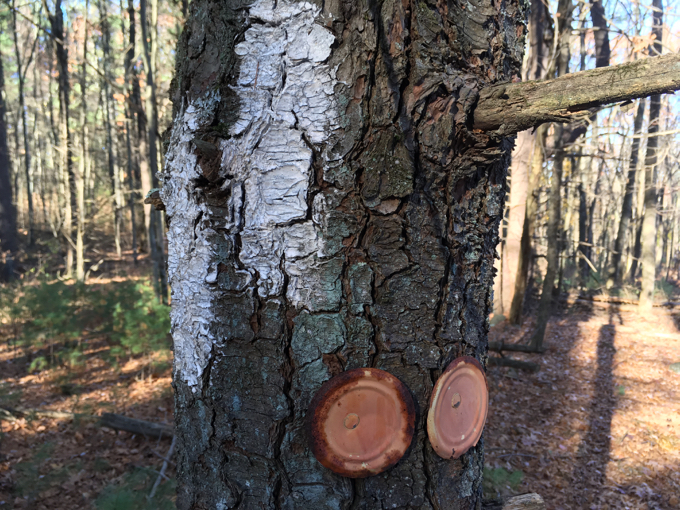 As mentioned, there is now a little hiker’s lot next to the Derrin House and one of those wooden crest signs denoting the spot. This is a small park, and has only one marked out-and-back trail. Still, it’s worth your time. I’ve read from multiple sources that the trail is 1.5 miles in total, which is not remotely correct. From the lot to the top is less than half a mile. I’m sure of it. 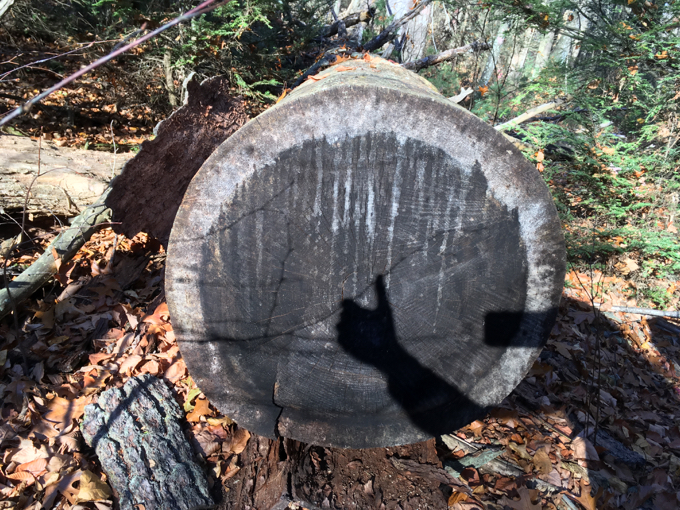 Once on the trail, there are glimpses of the namesake of this park. Across the main road from the park is the 1st Company Governor’s Horse Guard; the nations oldest cavalry unit. Horses still live and train here, and the people who do this stuff – the horse guards I guess – still come out here to keep the unit going.

The big red horse guard barn across from the new park parking lot has been taken over by the Avon Historical Society and the hope is that perhaps someday we’ll get another barn museum in Connecticut. Woo-hoo. 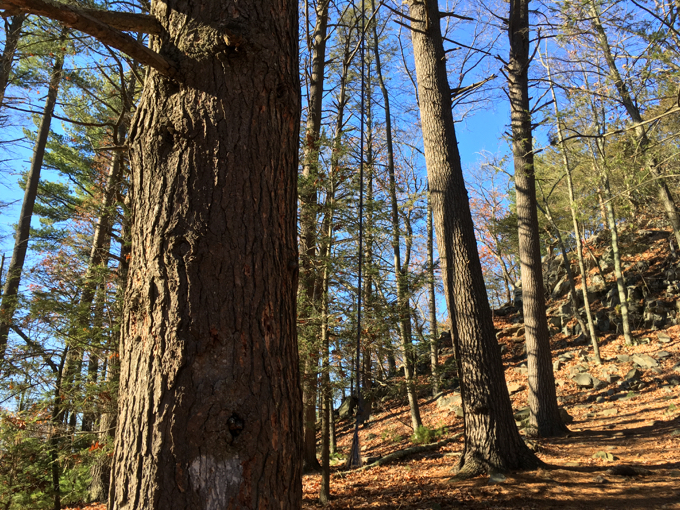 The existing AHS museum where this trail used to officially begin, the Derrin House is important because this land is the Derrin’s land. Or was 300 years ago. Somehow, through chance, selfishness, preservation… the plot of land of the scenic reserve was never developed.

So here we are, Damian and me, walking up the trail marked alternatively by white blazes and rusty can lids. (Yeah, it’s a thing.) As we neared the top, with Damian whining all the while, there was just no way he was going to clamber up the rocky escarpments to get up to the nice views. So he sat and ate a snack while I ran up the final meters to the ridge’s edge. 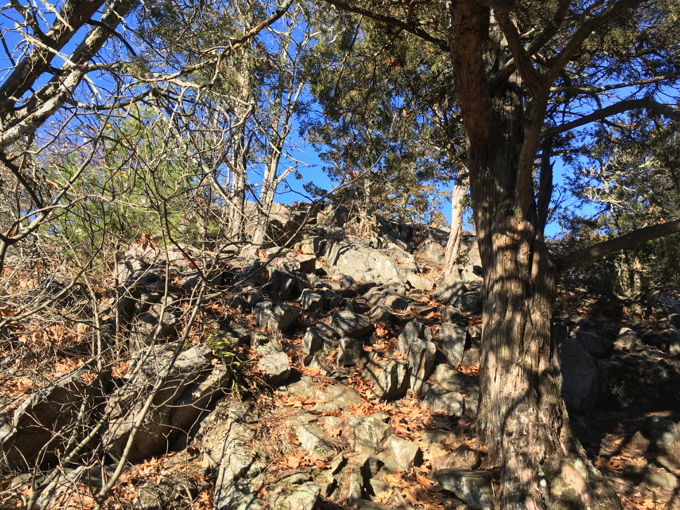 Now, the views up here aren’t unique to this little sliver of state land. Those of us who get out and about have seen this view at fifty other overlooks along the Metacomet Trail as well as several other lesser known trails from Meriden to Suffield.

And yet… it’s somehow cooler here. No one hikes up here. The official trail sort of peters out where I left Damian and those of us interested in the views must forge our own path. (It’s not hard.) I’m not sure why this is the case, exactly, nor do I particularly care. 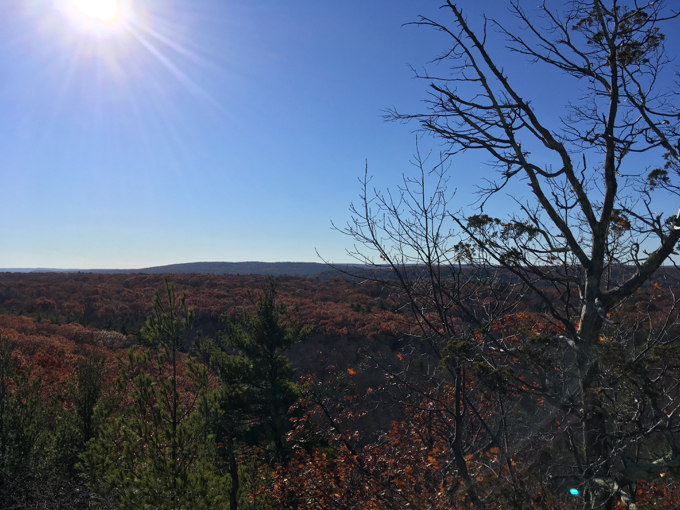 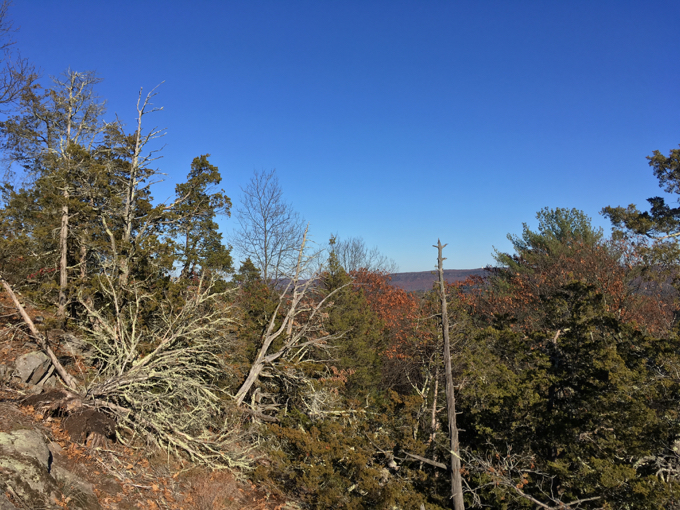 If I was alone, I’d have pushed northward along to ridge to see what I could find. As it was, I was tethered to my special needs son and couldn’t go too far. I spent a few minutes among the flagged and stunted trees, offering time-worn evidence of the difficulties of life on the ridge. The viewshed here is expansive and impressive; it’s always amazing to be in central Connecticut, one of the most densely populated states in the country, and see a sea of trees for miles around. 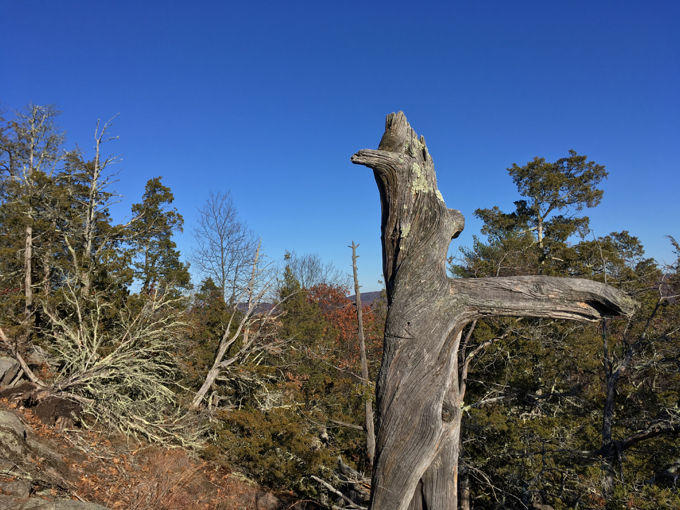 Satisfied, I scrambled down the scree and gathered up my son for the easy trek back down to the car. Damian is always much better when he’s “going back to the car” rather than the opposite. It gives him purpose and a tangible goal. (Downhill helps as well.)

Avon has some great hikes and this little one is perhaps the best. And yet… it’s a pretty well kept secret. Not as much of a secret as what Damian is thinking when he finds two pieces of wood and tries to tell me what they mean to him, but a secret nonetheless. 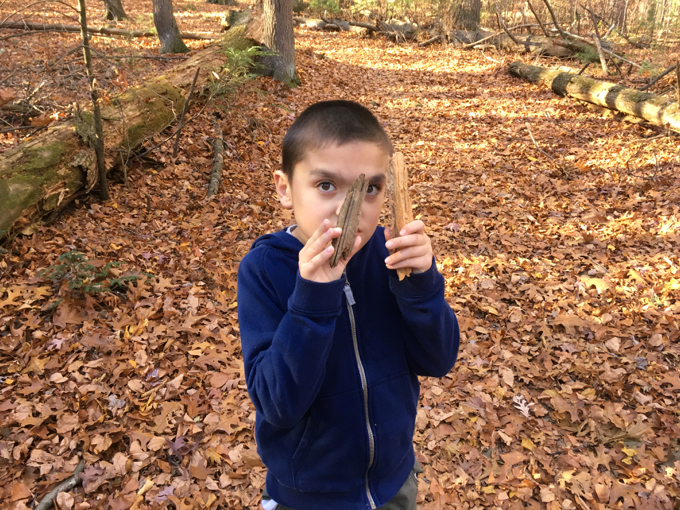