My seven-year-old son was looking at one of my maps and had some questions. The map in question was my map of Connecticut towns and at the time, 11 were colored in green. It was also time to color in a 12th. That town was Burlington and the reason for coloring it in was that I considered it “complete.” I gave Calvin the honors. 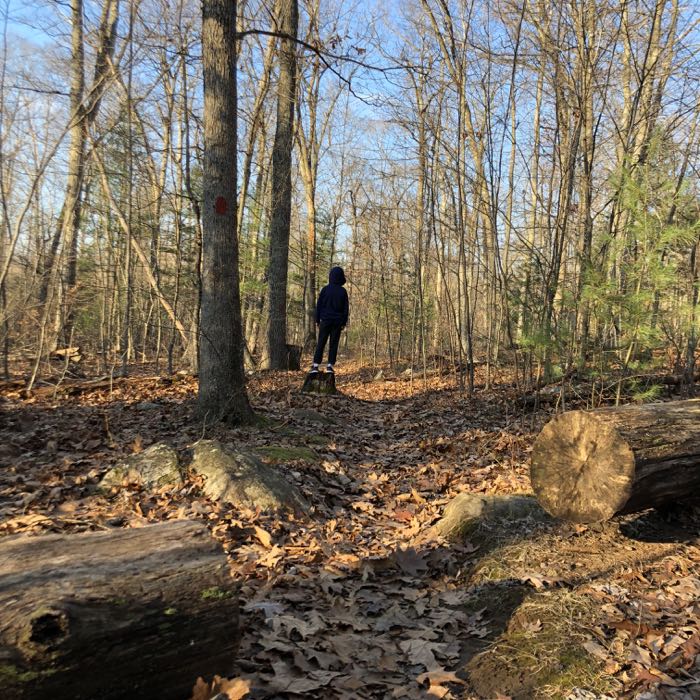 Which he happily did, but ever so slightly colored outside the town line into Avon. He was despondent about this mistake. At the same time, I was telling him why some towns were green and he seemed quite interested in his weird father’s hobby. So I asked him to look at the map and the town names and to pick which town he’d like to help me “complete” in 2019. He didn’t even think about it: “Avon,” was his immediate response.

That’s weird, I thought. It’s a town he knows, and it’s very near our current home in West Hartford. So I asked him why. He hemmed and hawed for a minute until finally admitting that if and when I complete Avon, then his ever so slight green marking across the Burlington border into Avon would be covered up. Clever, overly perfectionist kid I have here. Regardless, I said, “Avon it is. This means that you’ll have to join me for all the remaining Avon things in 2019.” He was on board. 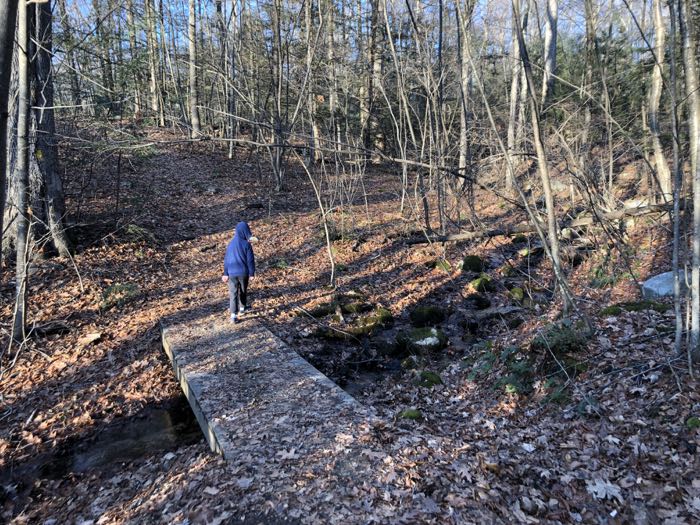 Which meant that he’d join me on my hike of Huckleberry Hill in the western end of town. The day was a bit chilly but sunny, and we hit the road. I had already walked around Countryside Park, which is connected to Huckleberry Hill via a trail across Huckleberry Hill Road. We parked in the cul-de-sac at the western end of Northgate Road and hit the – holy cow, the houses up here are HUGE. Like, almost humorously huge. I very much enjoy parking my beat-down Subaru on these roads and bumbling around the woods behind them with my goofy child. It is entirely our right to do so, and I imagine that at least a few of those homeowners turn their noses up at us.

So be it. There’s a decent trail network here and then all sort of form a grid on the hillside. That hill being, presumably, Huckleberry Hill. At no point are any of the trails very steep or rugged, but of course my child found the biggest boulder on which to play. 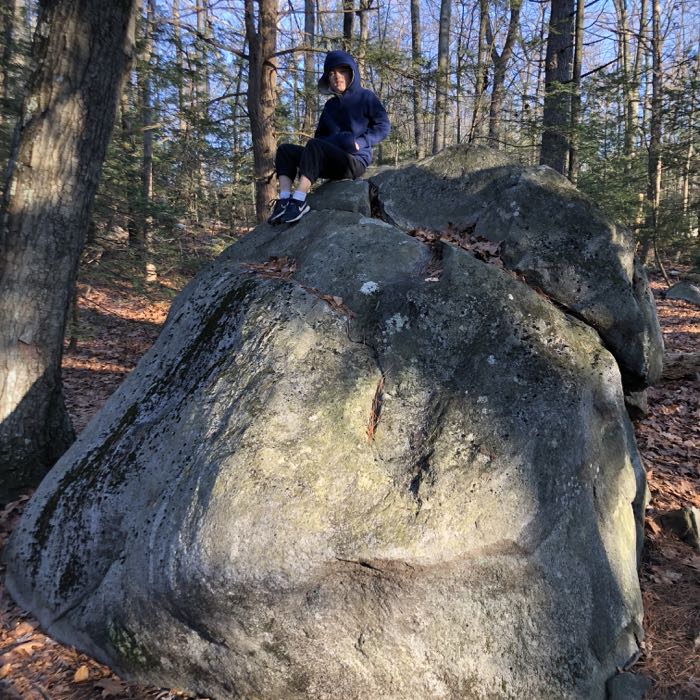 Our plan was to take the most circuitous route, counter-clockwise, and – holy cow, seriously, these are some seriously big houses we were walking behind. 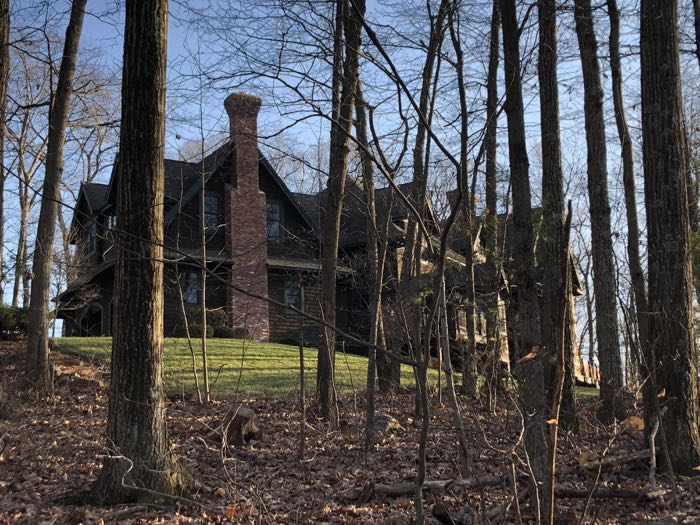 Calvin deemed that particular house “scary.” I laughed and asked him why. “Because it’s so big and dark. I dunno, it just looks scary to me.” At least I can rest easy knowing that our modest little cape comforts the boy. After all, who wants to have extra space and large sunlit rooms if it’s going to scare my dear child? Note to self: remind my wife of this while house shopping.

We ambled down the hill towards Huckleberry Hill Road and then began walking north, sort of side-hilling a bit. The trail made several stream crossings, most via bridges that have seen better days but still got the job done. It became evident that there has been some tree cutting here and there; not so much due to a lack of trees, but more because of the rutted and muddle woods roads we were navigating. 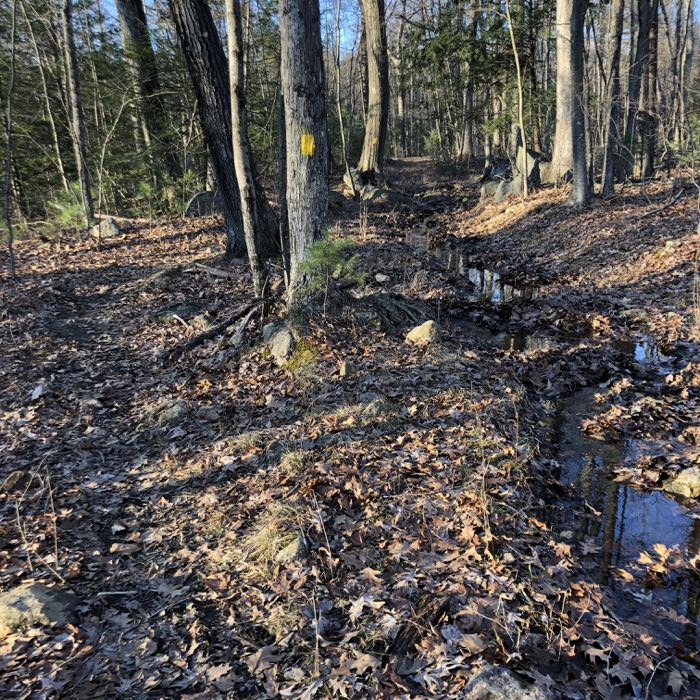 Ah, yes, I just looked at some info on Huckleberry Hill and learned that there has been a forest management/tree-cutting program in place here for many years. They’ve done a decent job keeping the forest “intact,” at least as far as I could tell. For example, Calvin had no idea that they were clearing trees in areas all around us.

At the northern reaches of the park, Calvin found a cool little rock formation that he determined could serve as a bed. It was a pretty cool little slot between to cleaved small boulders. I gave him a high-five for his resourcefulness: 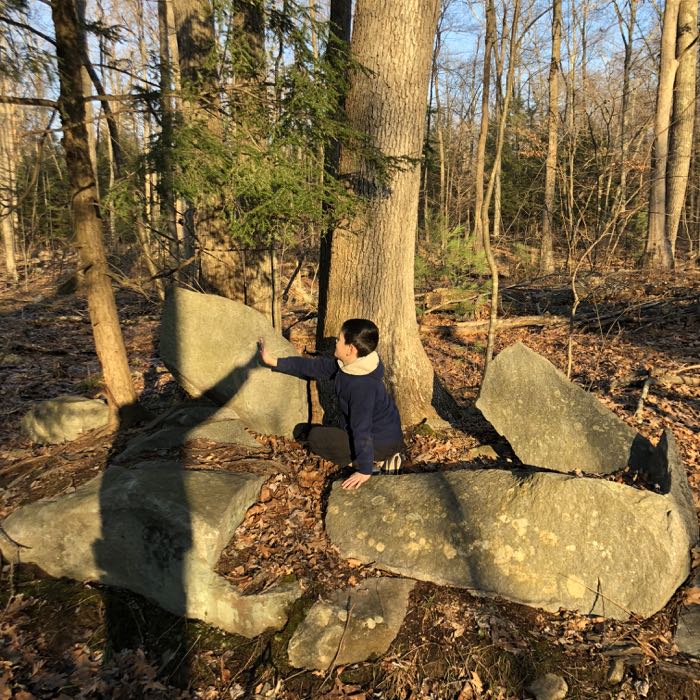 Then, as seven-year-olds are wont to do, this little scene turned in to a whole thing. We, apparently, were destined to live right here, in the Avon woods, right along a trail. Calvin’s bed and room would be over here, and my bed and room would be over there. My room turned into a kitchen though, as Calvin piled rocks for cooking followed by a quite-intense session of fire building. 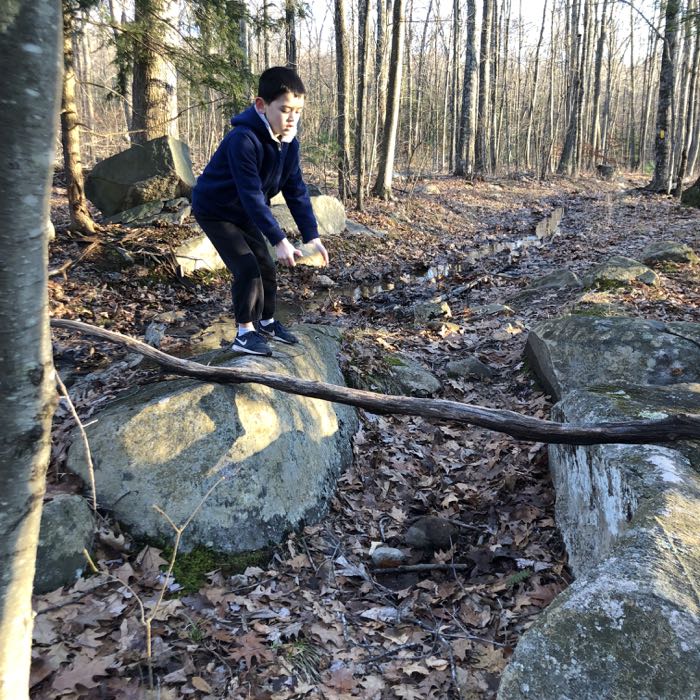 A spit was found and placed and all that was left to do was to catch and kill an animal and to start a fire with wet sticks. Calvin seemed determined that this was quite doable as the December sun was just beginning to settle behind a hill to the west. At first, he had squirrel on the menu but that quickly changed to bear.

That’s right. We were to hunt down and kill a bear with a stick in the half hour before the sun set, skin it, start a fire with wet sticks, cook it, and then sleep in our little rock shelters with no roofs. It was a whole thing. When I paternally explained that literally none of that could happen on December 23rd with no preparation or time, and that perhaps Mama would be a bit concerned with this plan, he seemed quite disappointed. 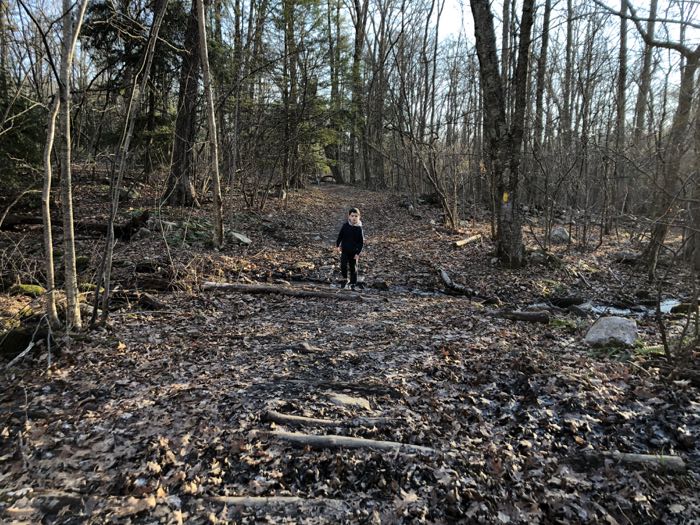 We messed about in our fake home for quite some time and I was impressed with Calvin’s determination to build and imagine a forest home. But that winter sun, on the second earliest sunset of the entire year, was now partially blocked by that western hill and… we still had some walking ahead of us.

So we began humping it up the hill, slightly dejected that his plan couldn’t come to fruition. Calvin did promise, however, to hunt down any squirrels or birds we would see on our way back up the hill to the car. (For the record, this was purely little kid imagination, as he has absolutely no clue what hunting entails and I’ve certainly never put the idea of killing and eating bears in his head.) 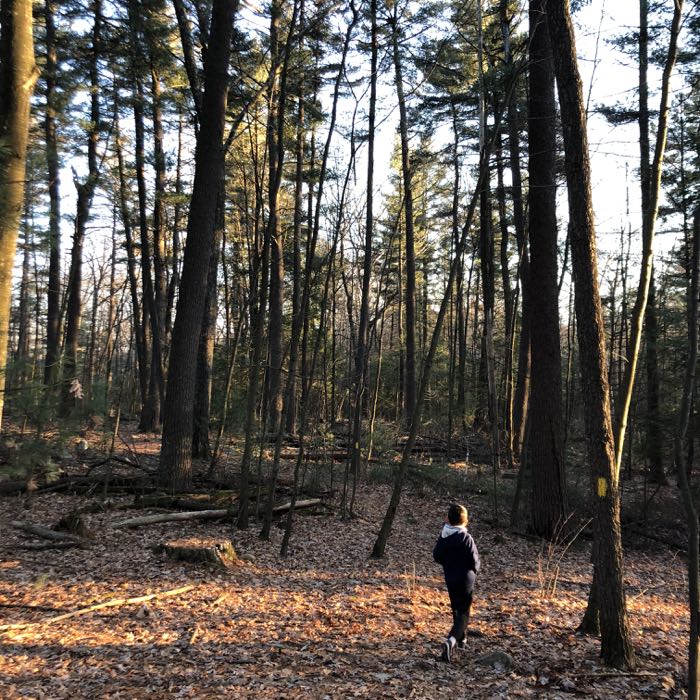 We made our way up the hill and through the hemlock grove to our car, safe and sound in the rough neighborhoods of the Avon highlands. This place offers up a good place to go for a nice and safe little walk in the woods.

Unless you’re a squirrel. Or bird. Or bear. 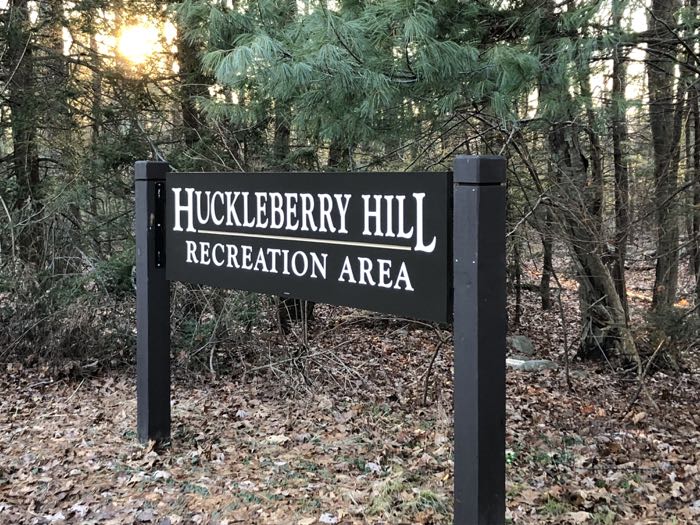