A couple years after this visit, the museum added a fairly large new wing. Perhaps I’ll revisit someday when I have all my faculties.

To catch y’all up, I had just visited East Haddam’s Nathan Hale Schoolhouse. On the drive down to this part of the state I started feeling ill for some reason. After I left the schoolhouse and on the 8 minute drive over to the Historical Society Museum, I really started feeling awful. It was very strange to say the least, but this is CTMQ and wimping out due to my disturbing fever dreams wasn’t about to happen. The rain started to really pour down as I pulled into the lot and made my way inside. 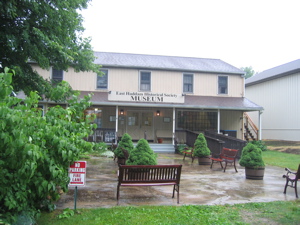 I wrote that whine in my introduction as a way of apologizing for the lack of thoroughness in my report. I was totally out of it, to the point of barely remembering my experience. And that’s a shame, because the little burg of East Haddam has put together a pretty nice little museum. A full “Seven rooms” according to their handsome brochure. Upon entering, I was greeted by a kindly older gentleman. It turned out that the guy was originally from West Hartford (where I live now), so we small talked for a bit and then he launched into the tour, inviting me to start off with a half hour movie about the Goodspeed Opera House. 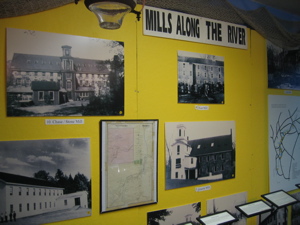 With sweat forming on my brow and a rapid weakening of my knees, I respectfully declined his offer and even told him I was feeling quite terrible, actually, so I’ll just be quickly checking the place out. And that’s a shame, really, because East Haddam (though I knew nothing at all of it) seems to have quite an interesting history. Of course, my near-hallucinatory state may have resulted in an embellished view of what I saw; I’m not quite sure. 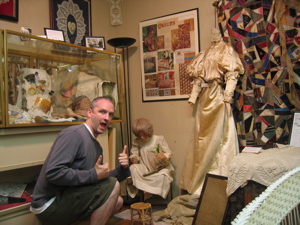 Built in 1876, the Goodspeed Opera House is one of the top attractions in the area. I could have taken a tour of the majestic old Victorian along the Connecticut River, as it was Connecticut Open House Day, but that would have to wait for another year. William Goodspeed, who was a shipbuilder and multi-faceted businessman, built this building to catch the attention of the bustling river traffic and promote the interests of the East Haddam community. It initially served as general store, office building, post office, steamship arrival point and shipping dock for imported and domestic merchandise. It totally looks like the Haunted Mansion at Disney World to me. 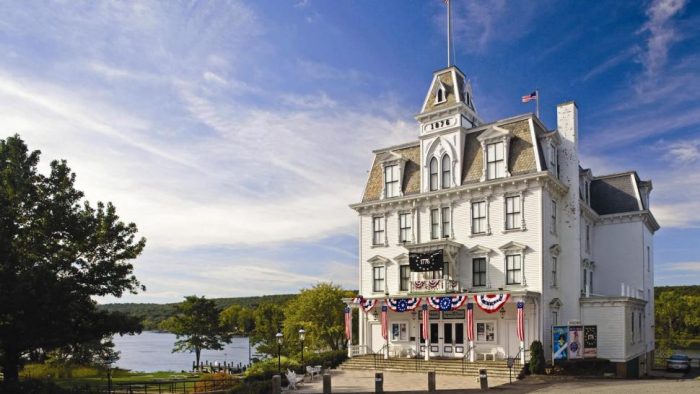 Not my picture, obviously

This Goodspeed character really did a lot to help East Haddam. But what about before him? Well, the land was part of an original purchase from the Indians in 1662 for thirty coats – about $100. It included Machimoodus, “the place of noises.” So named from subterranean sounds formerly heard there. The first settlement was along Creek Row in 1685. Ferry service across the Connecticut River began in 1695 and ended with the completion of the swing bridge in 1913. Areas of town are known as Millingtion, Hadlyme, North Plains, Leesville, Johnsonville, Moodus, Little Haddam, and the East Haddam Landings. 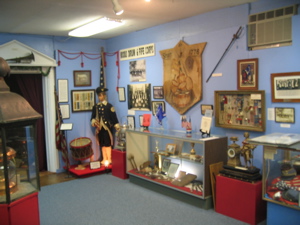 What are all those town names in one little town? That’s CT for ya… Provincial to the core, and I’ll never figure it out. It’s true, East Haddam is indeed east of Haddam, but both are several miles south of Middle Haddam. I suppose Little Haddam is part of East Haddam but apparently so is Hadlyme, which is several miles north of Lyme, Old Lyme, and of course, East Lyme. But you don’t care, what are these strange noises in the place called Moodus?

Dating back to Indian lore, there have always been stories of subterranean banging noises. These noises (and associated stories) continue on up to the present. There are a million articles online about the noises, all of which I find interesting. At least in 2007, people recognize they are merely small earthquakes rather than angry Narragansett Indian Gods or aliens or… oh heck, there are plenty of idiots alive today who still think this stuff. 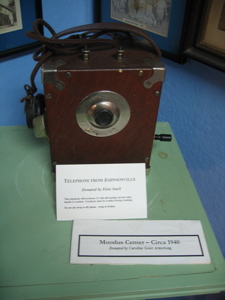 After checking out the displays on the Goodspeed and the Moodus noises, I quickly scoped out a room of random historical miscellany. Old fife and drum stuff, Venture Smith’s (a famous slave) tool chest, an old Post office booth, and an extensive display on the mills that the town was built up around a few hundred years ago. All quite authentic stuff and I’m sure it was interesting, but by this point my bed was calling my name… and it was 40 miles away. My head was spinning, but I was still in the game. Barely. I went to another room to learn more about the mill industry.

One room was set up like a general store from about 150 years ago. This was the Spencer-Cone store that lasted to varying degrees from the late 1700’s until the 20th century. But there was something odd going on… I started getting the feeling I was being watched. Watched by creepy dolls and creepier mannequins. I tried to learn about the textile industry of old Millington, but I couldn’t shake Ted Danson’s handsome stare… 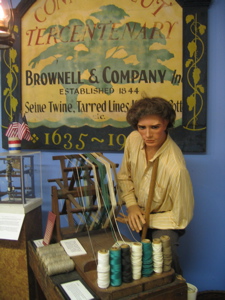 I turned, sweating more profusely now but still looking cool, to check out a miniature Goodspeed Opera House and to read about it and the floods it’s suffered and the money issues and all its rich history. As interesting as that was, I could have sworn Daisy Buchanan wanted the next dance… 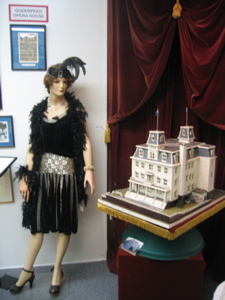 “Hey Daisy you floozy, I’m married,” I said aloud, as the room began to sway a bit. I left that main room to the back of the museum where I entered a room with a large display of changing women’s fashions. It focused on the popular dress styles of the early 19th century up through – Ahh, a little girl was standing there staring at me chanting, “One of us, one of us…” 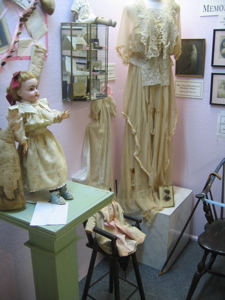 My word! What was going on! What insidious museum designer was messing with my fevered brain?! Besides, I don’t care about fashionable dresses from 1890 anyway. Get me outta here! I entered the next space… An old country store… Nice, benign, safe and – WHY IS JOHN KERRY SELLING ME OLD CHEESE?! 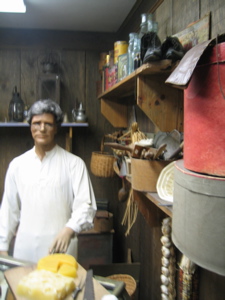 I looked left, I looked right, Ah! They were all talking to me. I wasn’t learning anything about the town! Things like how through the years there were as many as 19 saw mills, six grist mills, and 13 tanneries there! Things like how East Haddam native Captain George Comer was the last of the New England whalers who always came back to town, ultimately dying there in 1931. (Not to be confused with the last of the New England Whalers who will never come back to town.) My head was pounding with ache, my joints on fire with pain. At least young Keanu Reeves had some apples to offer me… 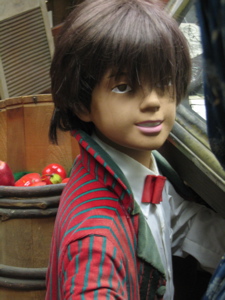 Huh? What was he doing here? No matter, I’d learned all i was going to learn about this beautiful town for the day and just wanted to find the exit and hit the road. Maybe get some cold water, take some Tylenol, and hit the sack before assessing my illness in full. Let… me… out… 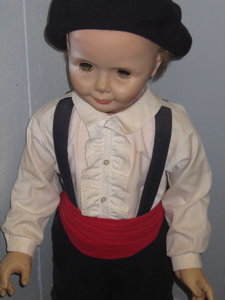 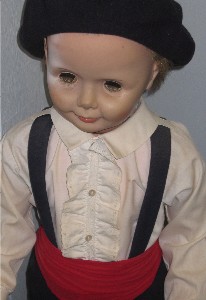 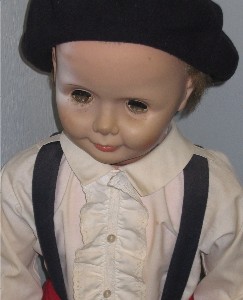 “Someone? Is anyone here!? I have no cell phone service! HEEELLLLLP MEEEE!” 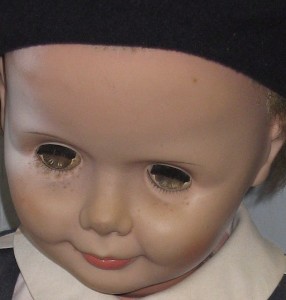 I really was sick and went straight home (skipping several stops I had planned for the day) to bed until the next morning at which point I was fine. I blame the dolls.