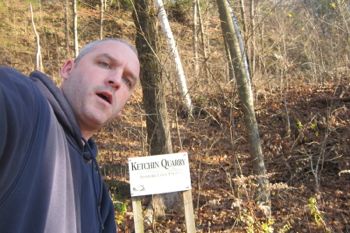 Weird because I take pride in writing almost every word on this site; only cutting and pasting in rare circumstances. But for this page, about a ridiculously short little “hike” along Quarry Road in Simsbury, it makes no sense to write my own words when the SLT has done it all already.

Before you read about this cool little trail, you should know that even though it’s super short and even though you never really lose sight of your car the whole time, the SLT clears this little trail and has provided a bench at the end. The bench is more of a way to stop people from continuing along, but still… so much effort put into a tiny little trek. 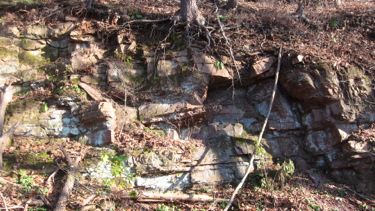 The Ketchin Quarry property, a four acre parcel on Quarry Road, has a significant place in Simsbury history. The path from the small parking area on the side of Quarry Road leads visitors to a steep rock face from which brownstone, a type of sandstone, was quarried. Town records show that by the early 1800’s, some Simsbury residents were cutting stone from the quarry for their own use, as fireplace lintels, foundations and fencing.

In 1897, Andrew J. Ketchin and his son William, two members of a family that included a number of skilled stone carvers, bought the quarry. They developed it into a commercial operation. Stone from the quarry was used to build a number of prominent buildings in town. These include the current Town Hall (formerly the Horace Belden School dating from 1909) and the Methodist Church on Hopmeadow Street, the original part of Central School, the original part of the Tariffville Firehouse and many of the buildings of the Ensign-Bickford Company, now merged with Dyno Nobel ASA. 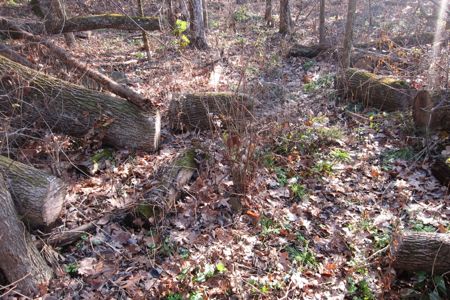 Tiny trail yet, someone cut the trees from the path. Amazing.

In 1925, A. J. Ketchin and Son sold the quarry to the Ensign-Bickford Company. The transaction included the quarry, three derricks for moving stone, and scores of stoneworking tools. Ensign-Bickford used the quarry as a source of stone for its factory buildings for a number of years. The company generously gave the site to Simsbury Land Trust in 1994. Today signs along the path at the Quarry tell the story of its geological origins and of its place in Simsbury history. 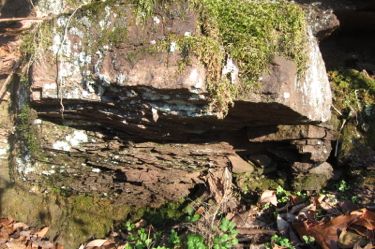 It is interesting that Connecticut was the site of numerous brownstone quarries at the turn of the 20th century and was known as “The Brownstone State”. Connecticut brownstone was used in buildings throughout the Eastern United States and was even shipped to San Francisco and London. There is little historical documentation for the Ketchin Quarry in Simsbury, but we do know that the buildings of Ketchin Quarry stone help define the character of our town center.

I hiked the trail in about 3 minutes. But the SLT, being as great as they are, posted a series of informational signs all along those 3 minutes to teach those of us who care to walk the trail all about the quarrying operation. 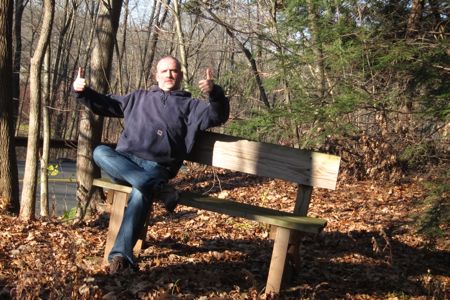