Suits Me to a Tea
Kettletown Brook Cascades, Southbury
January 2012

These falls (cascades, officially) are included in the new (2013) Connecticut Waterfalls guidebook, so I’m adding this page two years after visiting. And since I’m lazy, I’m not going to go find the CD that contains the original pictures to give you the lovely giant waterfall picture you so richly deserve. Sorry. 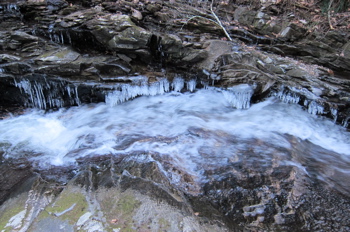 These are the rare falls on the massive CTMQ list of falls that can be, depending on your time of visit, more difficult to get to than you’d think. If you go during the times the state park charges entrants money, you have to pay money. Are these falls alone worth the prices of admission? No. But the whole of Kettletown park is.

If you plan on getting in a good hike and are planning on parking at Jackson Cove down in Oxford along the Housatonic, that’s not going to work, as I think it’s a residents only park. So plan accordingly. Or just go in the middle of January at (or even before) dawn like I did and you’ll have your choice of free parking no matter where you go.

If you park at Kettletown, the walk down the road to the cascades is easy enough. The Brook Trail itself follows the cascading brook in question. I imagine that during times of high water this is a mess of a trail – the payoff being more exciting photo ops.

And I imagine during dry months, this whole excursion will be a bit of a piffle. I can report that in January, even when the temperature is in the single digits like it was for me, the cascades are still tranquil and very pretty. (It wasn’t that cold leading up to my hike, hence it hadn’t frozen over.) 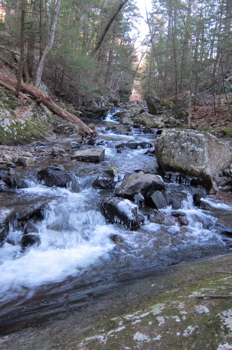 Kettletown affords visitors lots of hiking opportunities and the trail network it connects with, namely the Pomperaug, takes hikers south along the ridges above the river. This is a very pretty and relatively uncrowded natural space.

Oh, it’s called Kettletown because some lame white guys traded the Pootatucks a brass kettle for this land. Land which contained garnet mines and tons of space for charcoal platforms and such.

One freaking brass kettle. (Even better, the Pootatuck settlement of yore was buried underwater when the Housatonic was dammed in the early 20th century.)

These cascades are the tears of the Pootatucks.