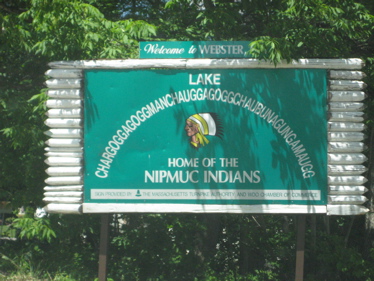 When I originally planned on “visiting” this lake and posting about it on CONNECTICUT MuseumQuest, I meant to have my rare “Not-In-CT” alarm go off. This alarm is for the few things that are CTMQ-worthy but aren’t in Connecticut – like my visit with Damian to Campbell Falls within sight of the border with Massachusetts, among others.

But as I stared closely at some maps, I realized two things: That you can see this absurdly named lake from the far northern reaches of Thompson, CT AND, more importantly, the cedar swamp on the southeastern end of this ridiculously named lake DOES bleed into Connecticut. And, in theory, after some seriously heavy rain, you could maybe, just maybe, slog a canoe from the lake proper to the swamp proper without realizing you’d crossed state lines. So… no “Not-In-CT” alarm this time. 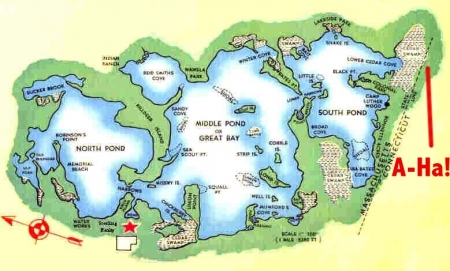 Of course, the only reason I’m hastily writing this page (the videos at the bottom tell the story better than I am) is because of the wackadoo name. And, as you’d guess, there’s a story about it. From OldeWebster.com:

Picture below is from a cool guy who rode his bike across the country [whose let his website lapse]. 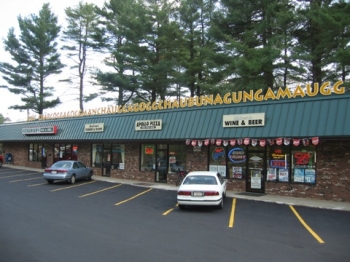 From the days when the big lake with the longest name in the United States was a central gathering place for the Nipmuc Indians and their friends, the great pond – divided by narrow channels into three larger bodies of water – has been famed throughout the area.

The Indians had several different names for the great body of water, as can be learned from early maps and old historical records. However, all of these were similar in part and had almost the same translation, according to Indian language. Among early names were Chabanaguncamogue, Chaubanagogum, and Chaubunagungamaug, the latter now incorporated in the long name.

All historians – and Indians of this and other territories – have agreed that Chaubunagungamaugg means “Fishing Place at the Boundary”. 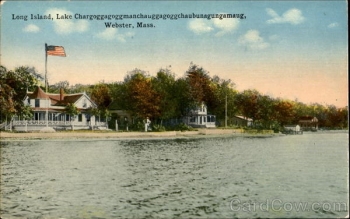 This old postcard is from… I forget. Darn. I hate that. But it’s not mine, of course and I’m sorry to the old postcard website I took it from.

One of the tribes on the other side of the lake was the Monuhchogoks, which was corrupted to the name Manchaug. A map of 1795, showing the town of Dudley, indicated the Lake name as “Chargoggaggoggmanchoggagogg”. In 1831, both Dudley and Oxford, which adjoined the lake, filed maps listing the name of the pond as Chargoggagoggmanchoggagogg, but a survey of the lake done in 1830 lists the name as Chaubunagungamaugg, the ancient name.

Authorities have indicated that the development of the name to the present long form stems from the time Samuel Slater began his mills near the lake, which was nearer the Manchaug village. Hence the Indian designation Chargoggagoggmanchauggagogg meaning “Englishmen at Manchaug,” came into use. Later they added their original Indian descriptive name, and the entire designation becomes “Englishmen at Manchaug at the Fishing Place at the Boundary” — or Lake Chargoggagoggmanchauggagoggchaubunagungamaugg. 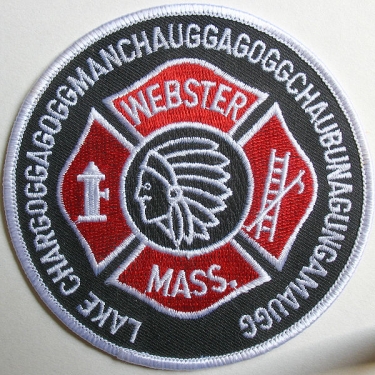 Despite this official knowledge, the lake – now descending too often to the designation of Webster Lake – is known the world over by the humorous translation “You Fish on Your Side, I Fish on My Side, Nobody Fish in the Middle”.

As far as is known, the great publicity attained by this translation and the length of the name, stems from a story once written by Larry Daly, editor of the Webster TIMES, and widely picked up by other papers and magazines. In his humorous article about the Lake and the Nipmucs, and the disagreement over the translation, he submitted his own translation – which is now more freely accepted than the authentic meaning.

In the days of the Indians, the lake was a noted fishing place. The tribes gathered there for their pow-wows.

The coming of the white man changed that kind of gathering, but throughout the years, the lake with the long name has continued to attract thousands of people to its shores each summer.

Nice going white man. Even if, as I read it, you’re responsible for this lake being the least bit famous with your silly translation. In fact, there are songs and poems and all sorts of fun stuff that has cropped up around the lake. 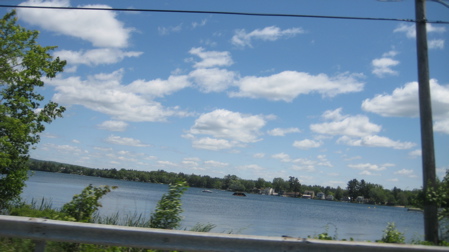 I happen to think it’s all pretty cool. And if the attendant videos below are any indication, so does the rest of the world.

Back to Geographic Oddities