North Haven doesn’t have much representation on CTMQ. A few little museums and maybe a trail here and there. And there’s this: Liuzzi’s Cheese – which is really much, much more than just cheese – tucked away amidst some ugly industrial and office buildings on State Street. I don’t know much about authentic Italian food but I know this: Liuzzi’s is pretty darn incredible.

My first bit of evidence for this was the parking lot. I was there a couple days before Christmas and every Tom, Dick and Luiggi was at Liuzzi’s. It was a madhouse. Once parked, I squeezed my way into the store and – wow, I could see I might be a while. I could hardly move about the store in order to take it all in. I couldn’t get anywhere near the deli counter to marvel at the quality and selection contained within.

Now you’re saying to yourself, “Steve, this place isn’t anything like all the other places on your The Connecticut Cheese Trail!” No, it’s not. There are no cows or goats here and I didn’t see any random farm cats either. But I thought that since Liuzzi’s makes several cheeses on-premise, that they are worthy of inclusion. If there are other stores like this who make their own cheeses, by all means, let me know. 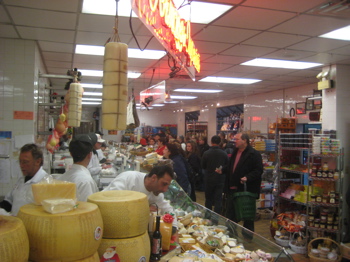 It took me a little while to get the lay of the Liuzzi’s land. The longest line was for the cold cuts and meats. Since I had no interest in that, I knew I was okay. There is another counter for the plethora of prepared foods and yet another for hunks of steak and other meats. Lots and lots of meats. Seriously people, look at this display.

You can buy this: a Beef Chalet Roll. What’s that? Why, it’s a Choice Butterfield Flank Steak, seasoned, then stuffed with prosciutto, ham and mozzarella. That’s meat stuffed with meat and more meat. MMMMMMMMMMmmmmmmmmeat.

In addition, Liuzzi’s sells all sorts of imports from Italy, including a full line of imported Italian pastas, cookies and crackers. Sauces and raviolis and hard-to-find specialty products! Italian-looking shoppers all seemed very pleased with the selection during my visit.

And believe me, this place is real Italian. The men working the counters all love their mamas; you could tell. They all had names like Pasquale and Dominico. (In fact, everyone in the Liuzzi clan is named either Pasquale or Dominico. Don’t believe me? See for yourself.) You should check that link for the history of the family of cheese artisans and also for the cool vintage cheesy – in a good way – pictures. 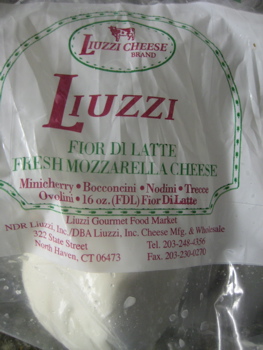 The family’s cheese making roots date back to the mid 1800’s! So yeah, they know what they’re doing. Perhaps more than any other cheese maker in Connecticut in a lot of ways. So now you can see why I’ve included Liuzzi’s on my Cheese Trail.

As mentioned, they make a bunch of different cheeses on-premises. The cheese of their home region. They are: Fresh Mozzarella, Ricotta Cheese (large curd and whipped), Basket Cheese, Caccioricotta, Caciocavallo, Smoked Mozzarella and they even make Home-made butter. Now, I don’t what those cheeses that start with C are, but they sound delicious. 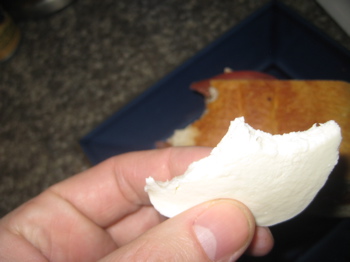 Okay, okay, curiosity got the best of me – caccioricotta is a ewes’ milk cheese from central and southern Italy and Sardinia made in 2 versions. The soft version is made by a lactic coagulation and may be eaten fresh or salted and ripened for 2 to 3 months for use as a dessert or grating cheese. The hard version is coagulated with rennet or fig juice and the curd is moulded, salted and ripened for 3 to 4 months.

So what’s caciocavallo? Oh, it’s even better. Read this explanation from cheese.com through to the end:

This cheese originates from Southern Italy. It’s a traditional, stretched curd cheese made from cow’s milk. It’s gourd-shaped and tied at the thin end with a cord to hang. After the period of three months this cheese can be eaten as a table cheese, after the period of two years it is used for grating. There are also smoked versions of this cheese. Cavallo means “horse” in Italian and it is said that this cheese was originally made from mare’s milk. In Italian language the expression “to end up like Caciocavallo” means to be hanged. 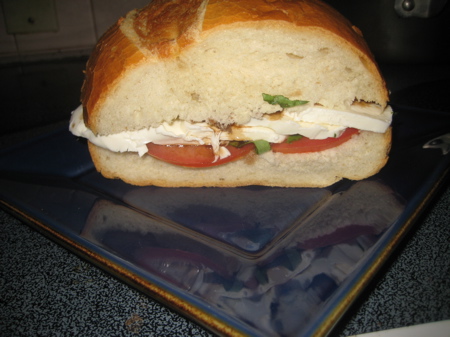 I bought some fior di latte. Which, as you Italians know, is merely mozzarella. Did you know that mozzarella is an Italian Traditional Speciality Guaranteed food product? The term is used for several kinds of Italian cheeses that are made using spinning and then cutting (hence the name, as the Italian verb mozzare means “to cut”). It also means mozzarella can only officially come from certain regions of Italy.

But whatever, as with champagne and tequila and all those regional food items, no one adheres to those EU rules. I never understood the appeal of fresh mozzarella – until I had real fresh mozzarella. (I’ve also never understood why Italian-Americans insist on saying “Mootz.” It doesn’t have much flavor, but somehow that slight tang and slight brininess along with the smooth yet springy texture works.

I love it. This stuff was top notch. I made some awesome TBM sandwiches which I could eat until the cows come home, get milked, and then made into cheese. MMMMMMmmmmmmozzarella!

I should note that I also bought some sort of mozz, prosciutto and roasted pepper roll thing which we served at our holiday brunch. My extended family loved it silly. 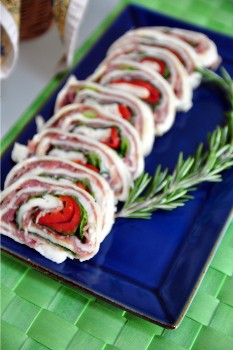