I’ve no information on this stop along the Underground Railroad. But I can verify that the whole family drove by it with me after a visit to an in-town children’s museum. This is located in the nicest part of Manchester, that’s for sure. 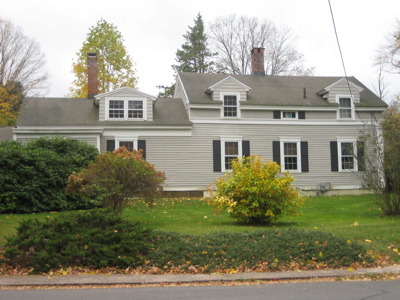 The house from the back. Trust me.

Update! From the newly revamped CT Freedom Trail (as of February 2011) website:

Hart Porter built this home between 1840 and 1845. According to oral tradition, the outbuilding was used as a hiding place for fugitives escaping on the Underground Railroad. There is a full basement in the small building that is accessible only through a trap door. Although Manchester is not generally recognized as being on an Underground Railroad route, there is some evidence of abolitionist activity. The Methodist Church hosted anti-slavery meetings and the pastor often preached abolitionist messages. Frederick Douglass spoke in the church at an anti-slavery convention in 1843. Porter was married in the church by an abolitionist pastor, which could indicate abolitionist sentiments. This home is privately owned and not open to the public.

Thank you Official People. For this would have been the most useless page of thousands on this website if not for that paragraph.