The best story from my visit to the McGuff Museum of Girl Scout History does not lie in the artifacts lovingly collected and placed for exhibit in the bowels of a large building in North Haven. No, the best story surrounds the fact that I, a 40-something man with no daughters, no connection to girl scouting, and no real interest in girl scouting, toured the museum alone one random weekday afternoon. 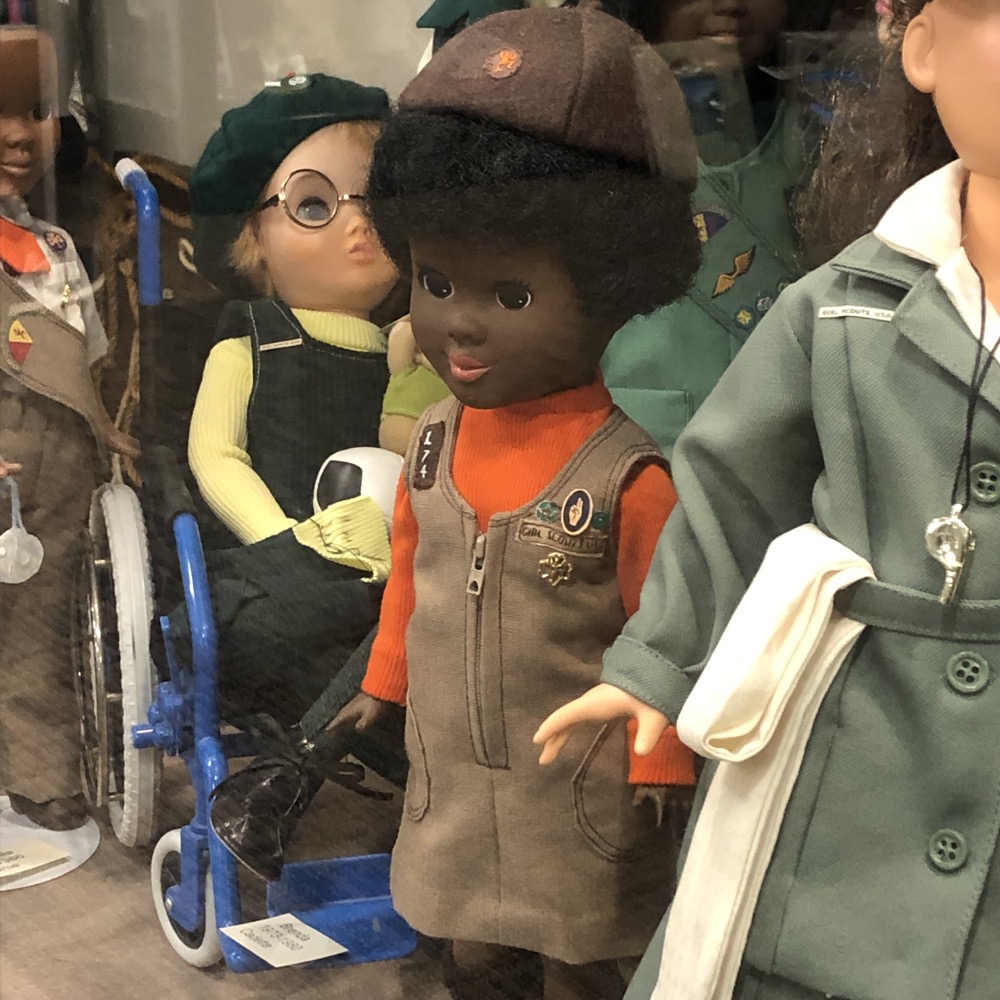 And this isn’t a museum that has open hours either. It’s a “request an appointment and hope for the best” type of museum. But I hadn’t requested an appointment. (And this was my second attempt at getting inside, having tried half-heartedly a few years prior with Damian at my side.)

I arrived at a time that I was pretty sure was listed as a time when Girl Scout staffers would be present. But finding them inside the large building that also houses foot care specialists and real estate agents wasn’t easy. In fact, a woman asked me if I needed help when she found me aimlessly wandering around. 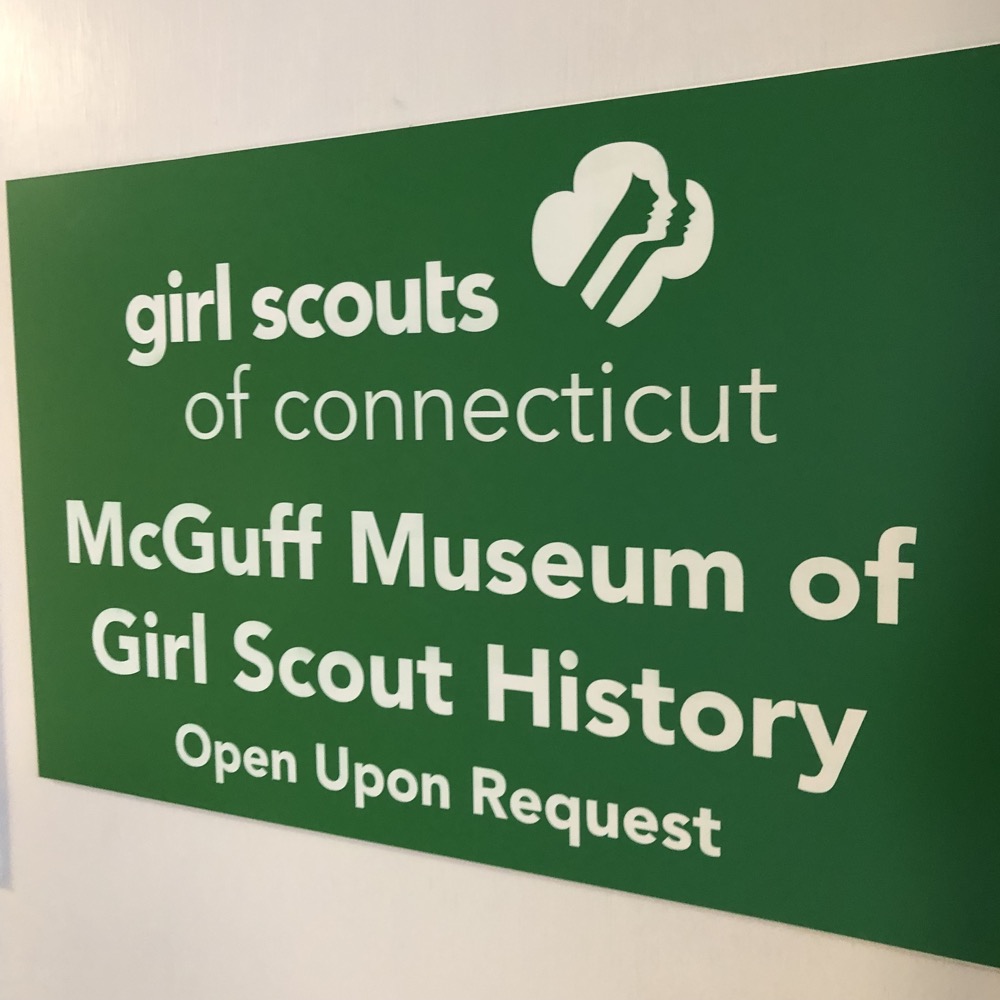 “I’m looking for a Girl Scout Museum which I’m not even sure exists,” I boldly proclaimed.

Sandy (not her real name because I don’t remember her real name, so I suppose it could actually be her real name by pure luck) was not around but another woman was. They were intent on getting me inside, but couldn’t find the key to the locked down museum. She… let’s call her Betty, and my helper woman scoured the joint for a key and I think they may have even tried contacting Sandy on my behalf. 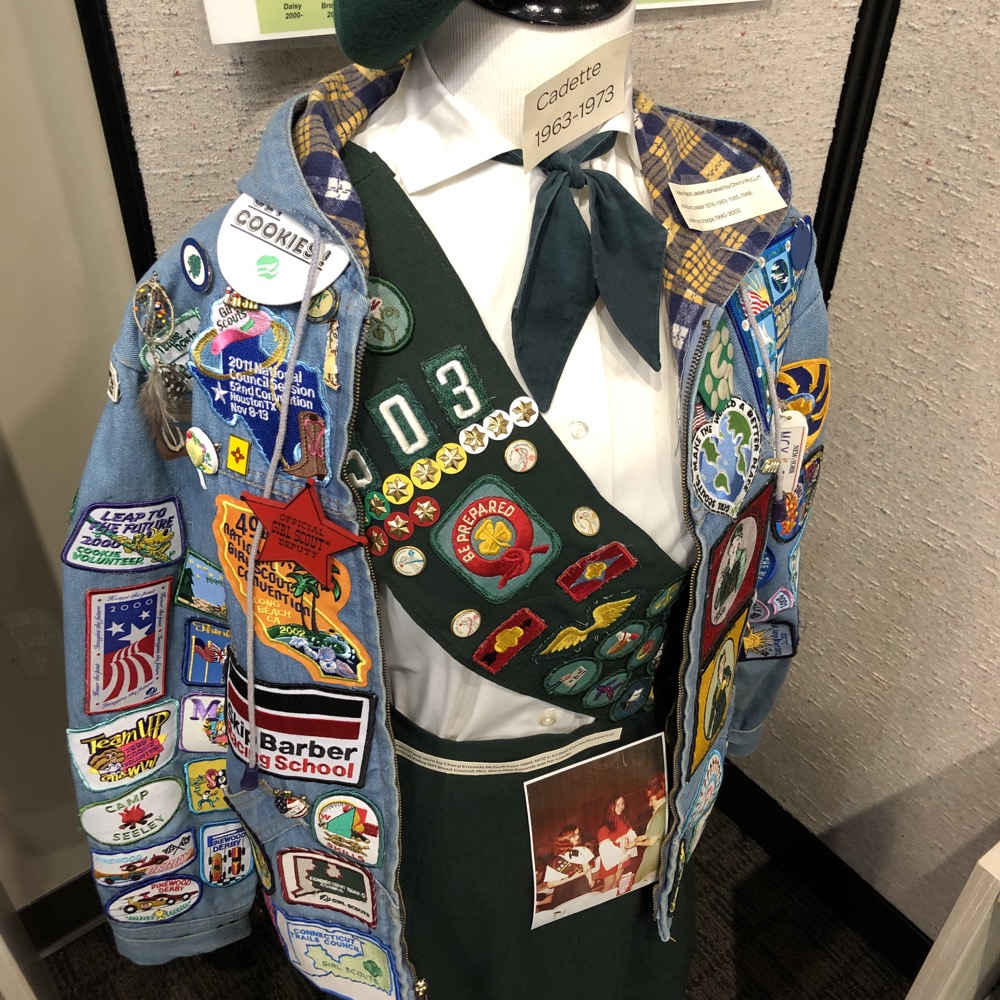 What wonderfully helpful women. While we were attempting to break in, the question came.

“Why do you want to see this place? What is your connection to scouting?”

I went for it. I lied by butt off. I invented a daughter. I’ve never gone that far before, but the effort required to see this place, and the specificity of the subject matter almost forced me to do this. As I was lying, it occurred to me that I know nothing of girl scouting – and I was talking to women who likely devoted their lives to it. It was terrifying. 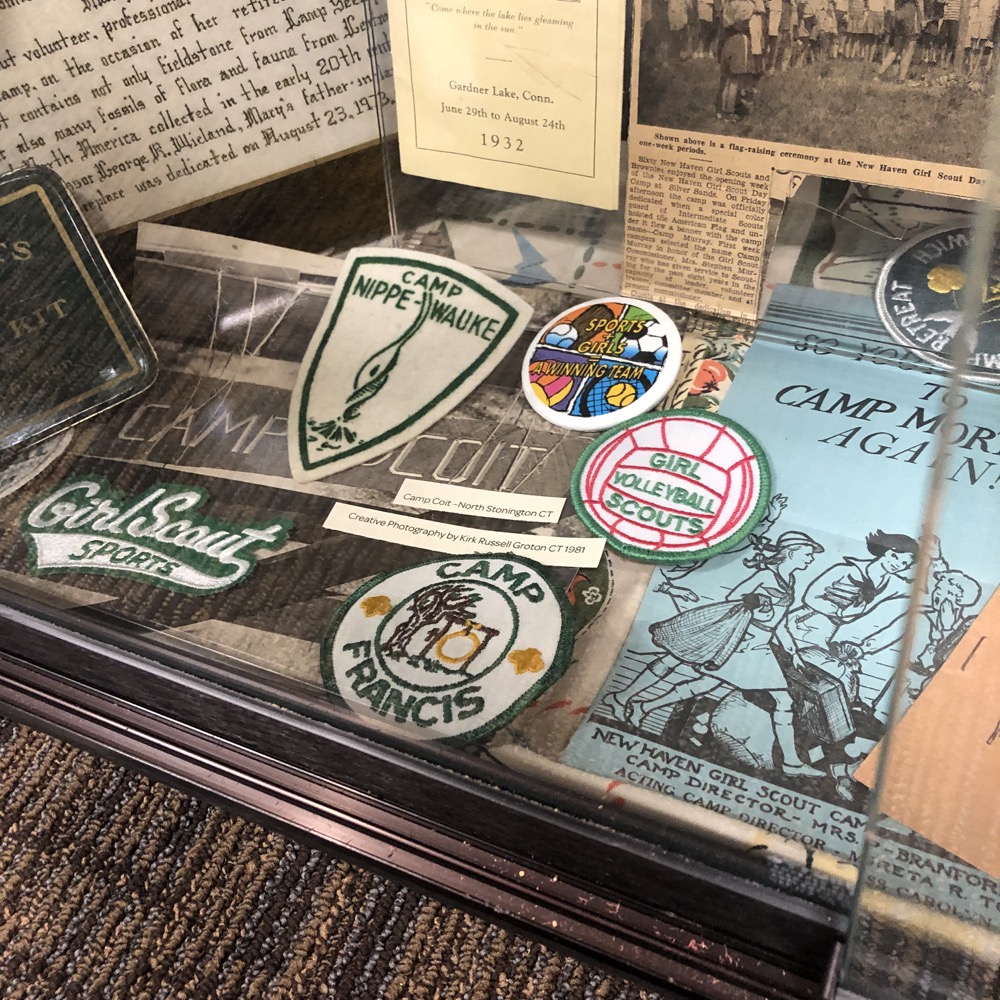 Just as I was about to fall apart, the key was procured and I was in! The museum is housed in one large room and contains the history of girl scouts in Connecticut. It opened in 2013 as the Museum of Girl Scout History but the McGuff name was attached a few years later to honor the family whose philanthropy made it possible.

Cheryl and Stephen McGuff of Avon made the generous gift in 2011 that made the museum a reality. Girl Scout hats off to the McGuffs. And hey, I think the woman who got me into the museum and stayed by my side the whole dang time was not “Sandy” or “Betty,” but rather Girl Scouts of Connecticut CEO Mary Barneby. (I just found a picture scouring for info on this place.) 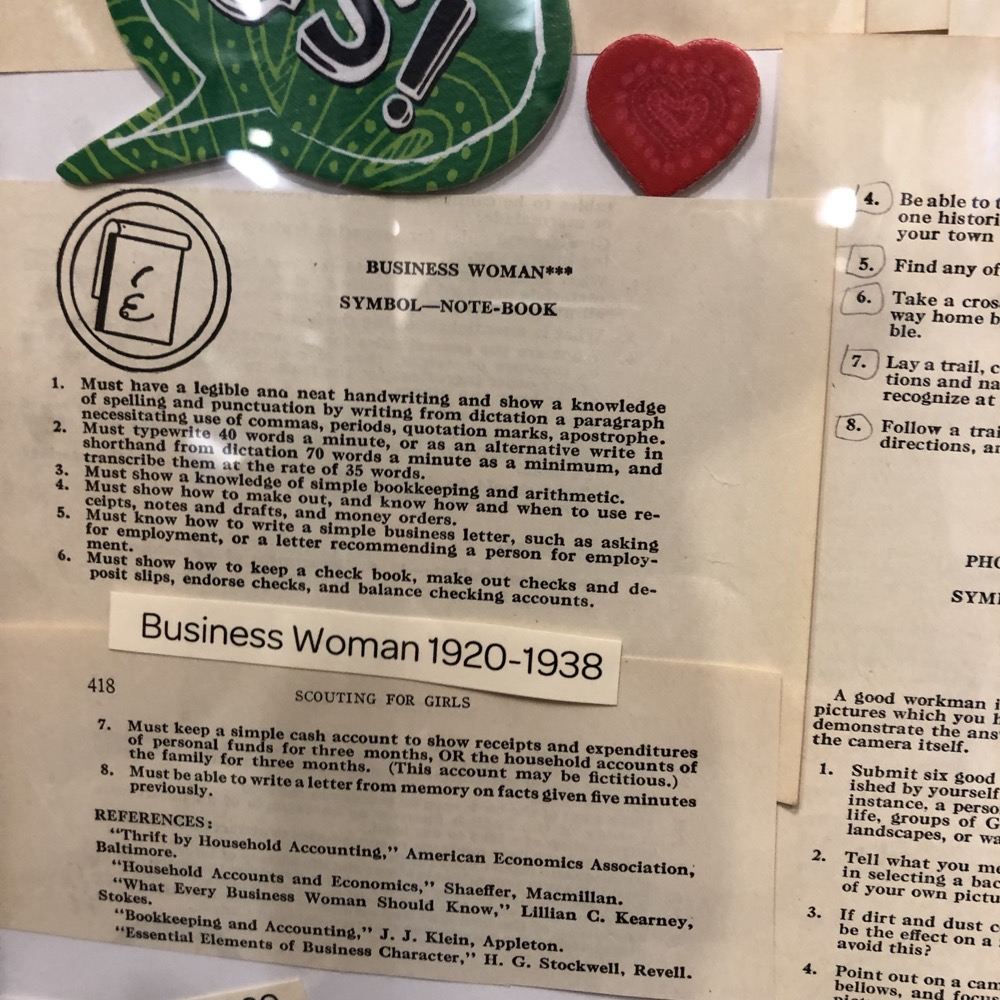 Holy cow, I was lying about a fictional scouting daughter to the head cheese. Eesh. I hope I didn’t weird her out too much. (My ignorance became my strength though; I love my fake daughter but don’t really know much about her non-existent scouting, so here I am at the museum to show her that I’m trying to learn. In retrospect, that was kind of brilliant.)

Keep telling yourself that, Steve. If it helps you sleep at night. 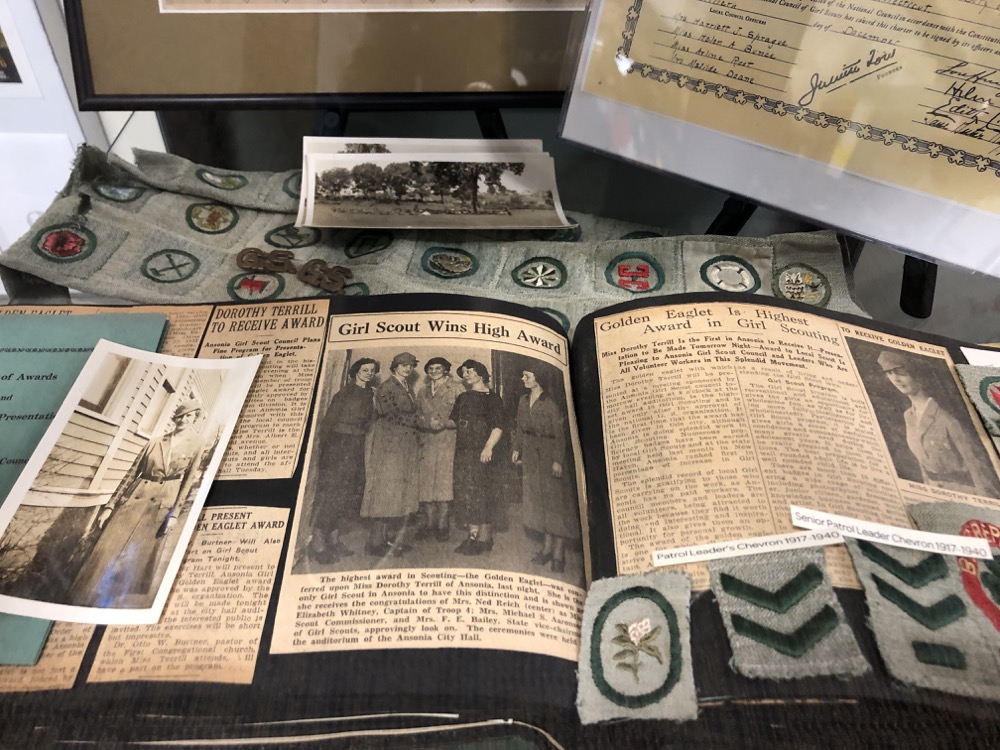 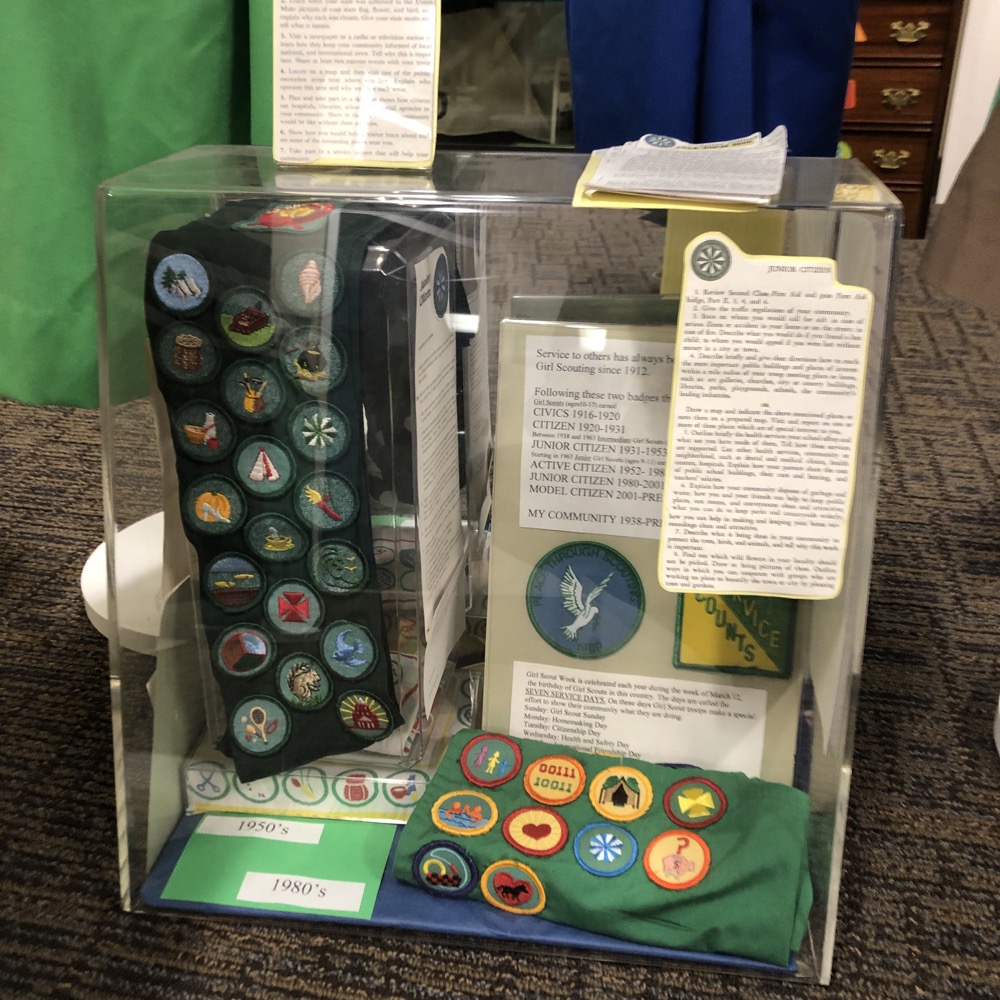 The Girl Scouts of Connecticut museum consists of displays of Girl Scout memorabilia from around Connecticut from 1912 until today. And it’s pretty interesting. My stunningly beautiful and brilliant daughter would love it. Especially the try-on area where she can dress up in different Girl Scout uniforms from past eras!

The museum also houses a collection of dolls in replica uniforms, local and international items, historical uniforms, accessories, and more. The exhibits focus mostly on Connecticut scouting, but I did learn a bit about the history of Girl Scouts in general as well. 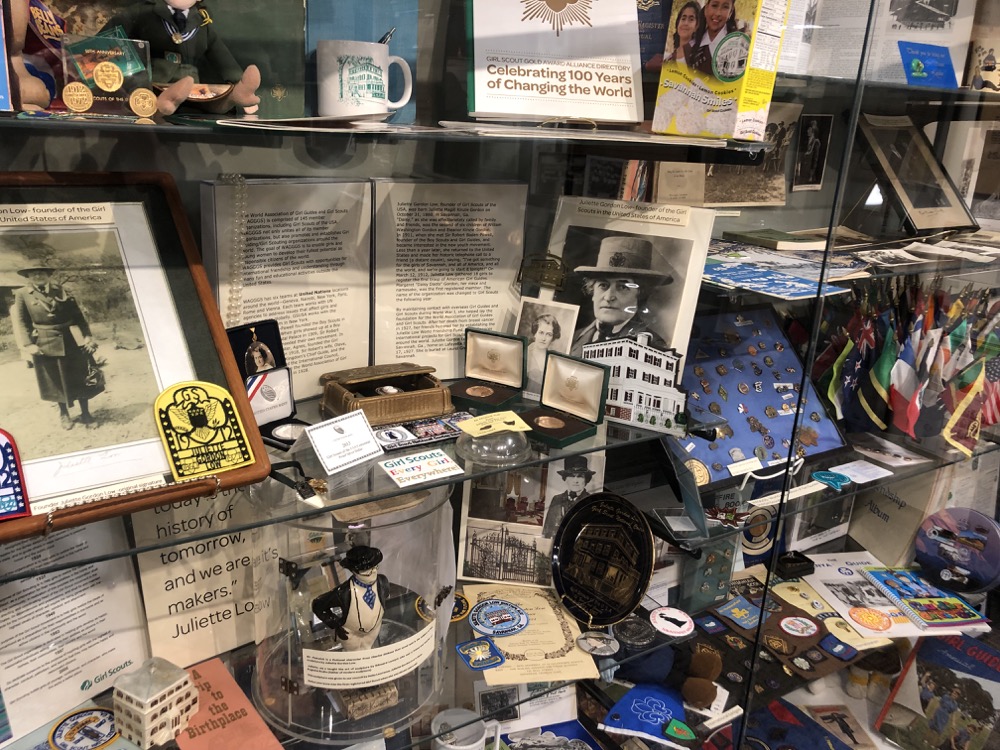 In March 1912, Juliette Gordon Low brought a group girls together in Georgia, wanting them to explore new possibilities and the wonders of the world around them — and she wanted them to do it together. Thus, Girl Scouting was born.

Along with Juliette Gordon Low, also known as “Daisy,” these first Girl Scouts blazed trails and redefined what was possible for themselves and for girls everywhere. They played basketball. They hiked, swam, and camped. They learned to tell time by the stars. And most importantly, they shared a sense of adventure and a belief that they could do anything. And just like Girl Scouts do across the country and around the globe today, they offered a helping hand to those in need and worked together to improve their corner of the world. 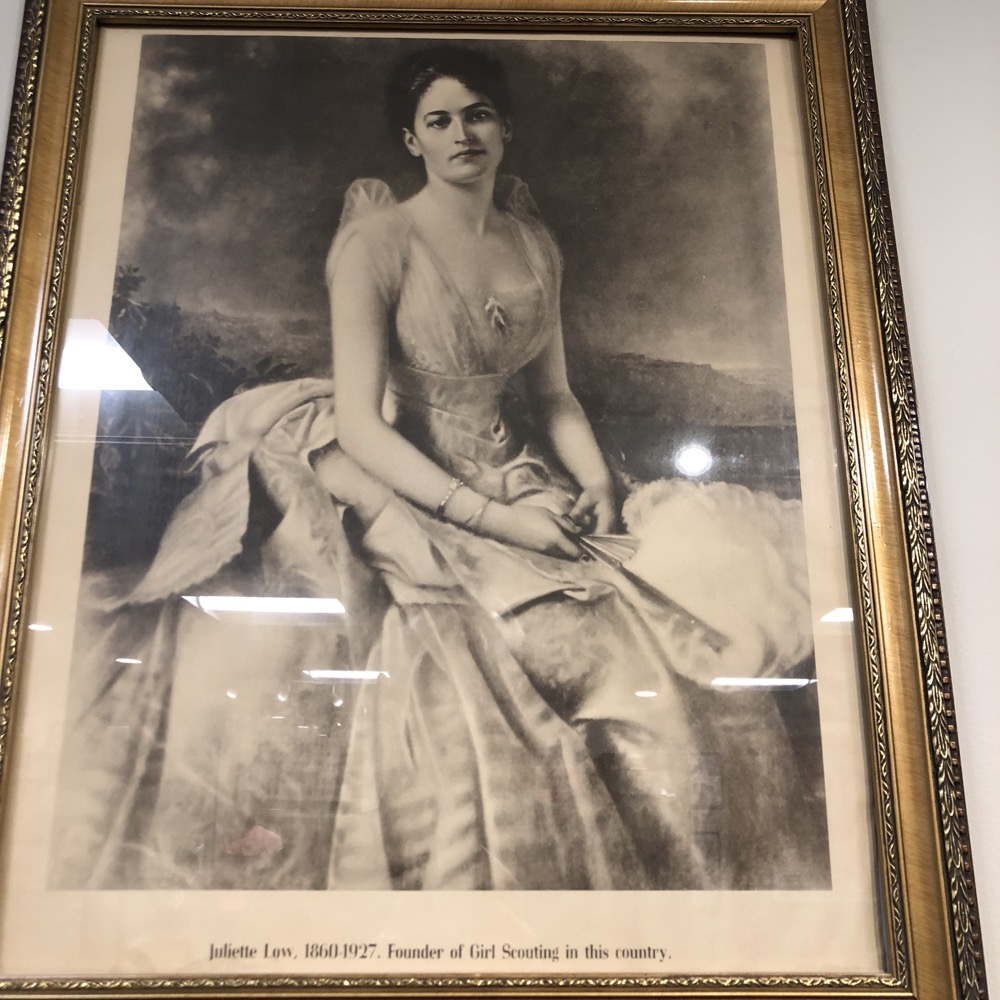 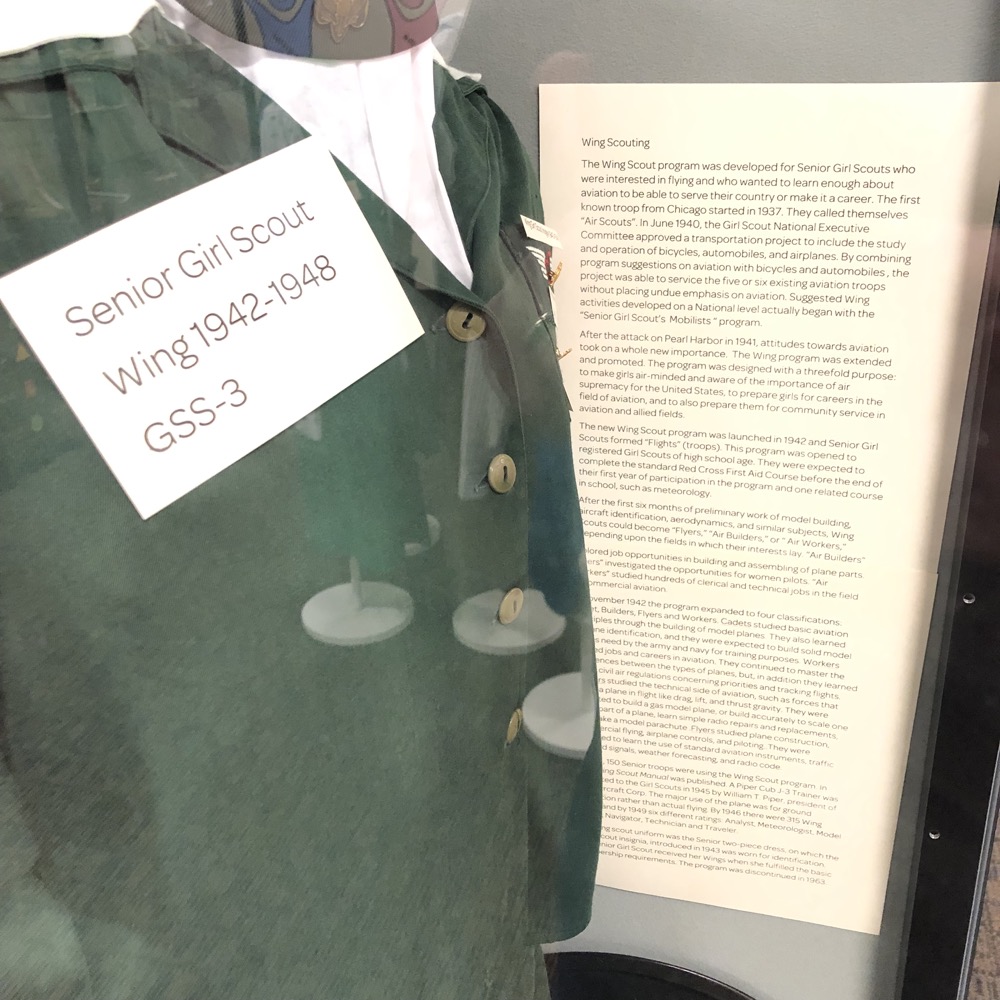 What’s interesting to me is that nowhere in the Girl Scout histories I’ve read is any mention of Boy Scouts. The Boy Scouts got going just a few years prior in 1909 and one would assume that they influenced Gordon Low, but I’m not seeing that as the case. And good! Girls don’t need no stinkin’ boys.

Since the founding of the Girl Scout Movement more than a century ago, Daisy’s small circle of girls has grown to include nearly 2 million girl members and more than 50 million Girl Scout alums. Including my fictional daughter. 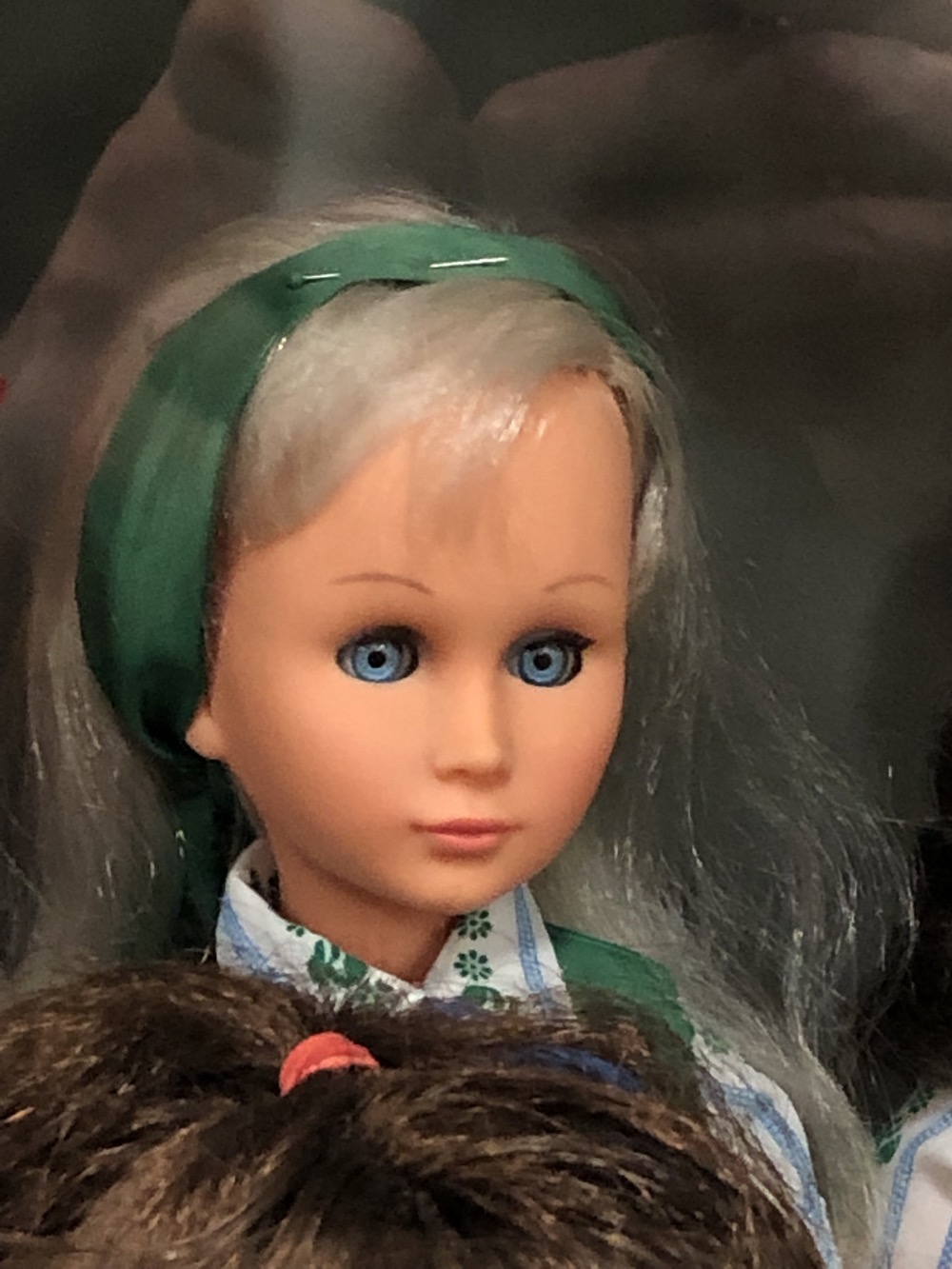 Mary is justifiably proud of this little museum. It is comprehensive and houses a lot of cool artifacts. It is well-presented and held my interest for far longer than you’d think. Back in the 80’s when I was involved in scouting and my (real) sister was a Brownie and then a Girl Scout for a short while, there was a feeling that they just did “girl stuff” and it was all very sexist in a way.

I believe that was certainly true then. But back in the day, Girl Scouts were progressive and didn’t seem to be pigeonholed into gender tropes. They had lots of wartime programs and even promoted things like getting pilot licenses and entering architecture. They hiked and camped as much as the boys did – again, this wasn’t happening in Delaware Girl Scouting in the 1980’s at all. (And I’ve heard similar laments from women my age about their experiences.) 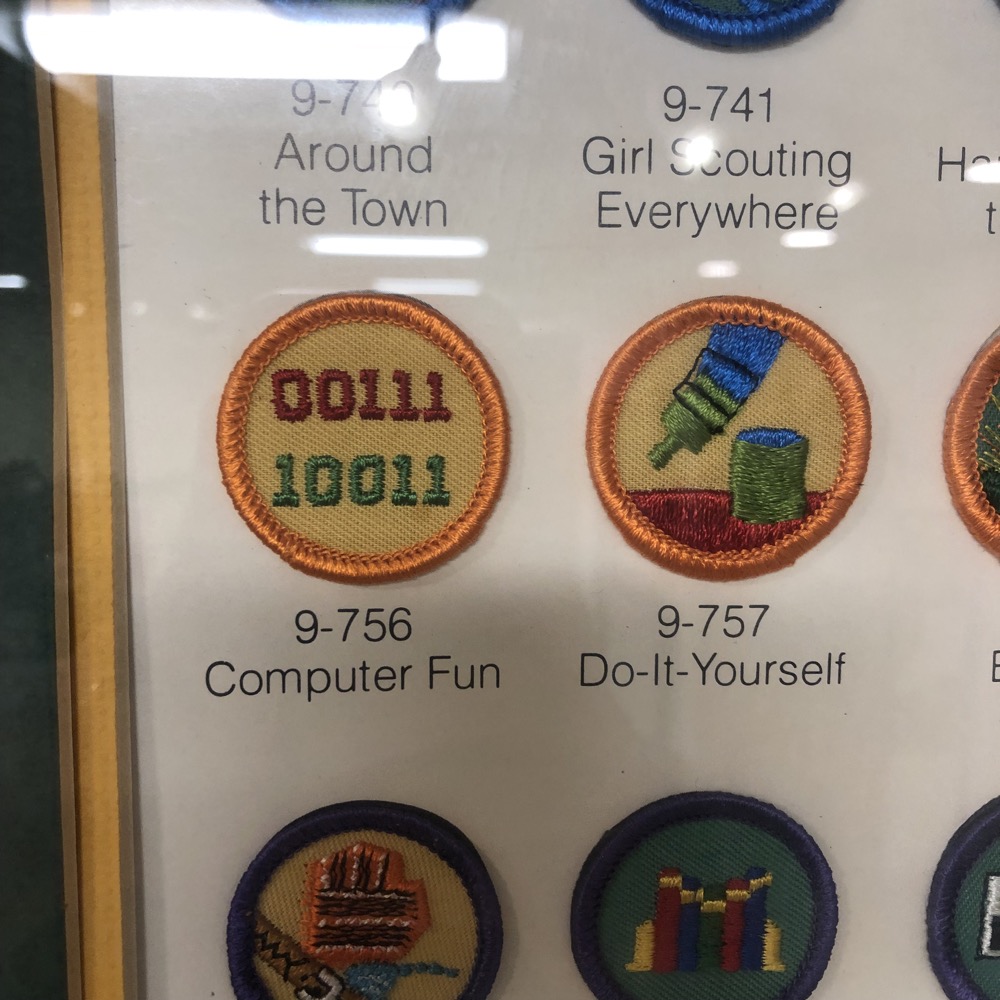 My fake daughter would like you to know that today’s Girl Scouts are a bit more well-rounded and adventurous, for what that’s worth. (Nothing; as I have no idea.) I do know that several Connecticut Girl Scout camps have closed in the last few decades because I’ve hiked through several former properties.

I was most fascinated by the merit badges (or whatever the “girl” equivalent is called) of yore. You’d sort of expect lots having to do with secretarial work and baking and sewing and stuff, but that’s not entirely the case at all. Back in the day, some were pretty groundbreaking. I wound up having a rather in-depth conversation with Girl Scouts of Connecticut CEO Mary Barneby. 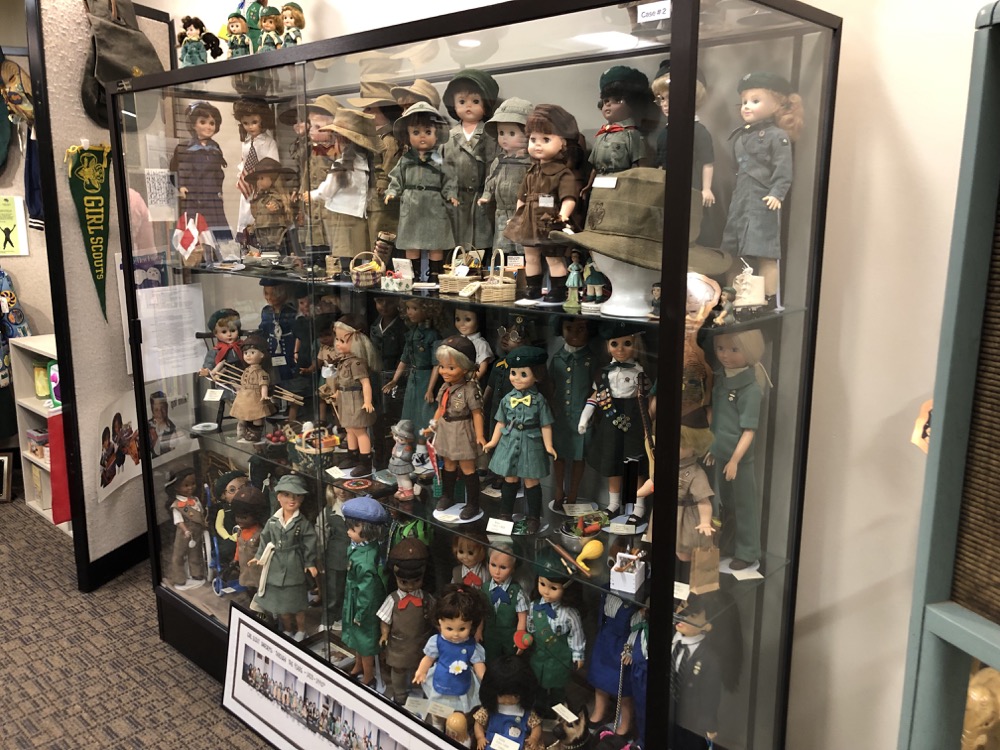 Sure, the museum features an army of dead-eyed dolls and plenty of stereotypical “girl stuff,” but girls can certainly still be girls while not being demeaned for doing so. I came away from my 40-minute visit with a greater appreciation for the history of Girl Scouting and the future of the organization. 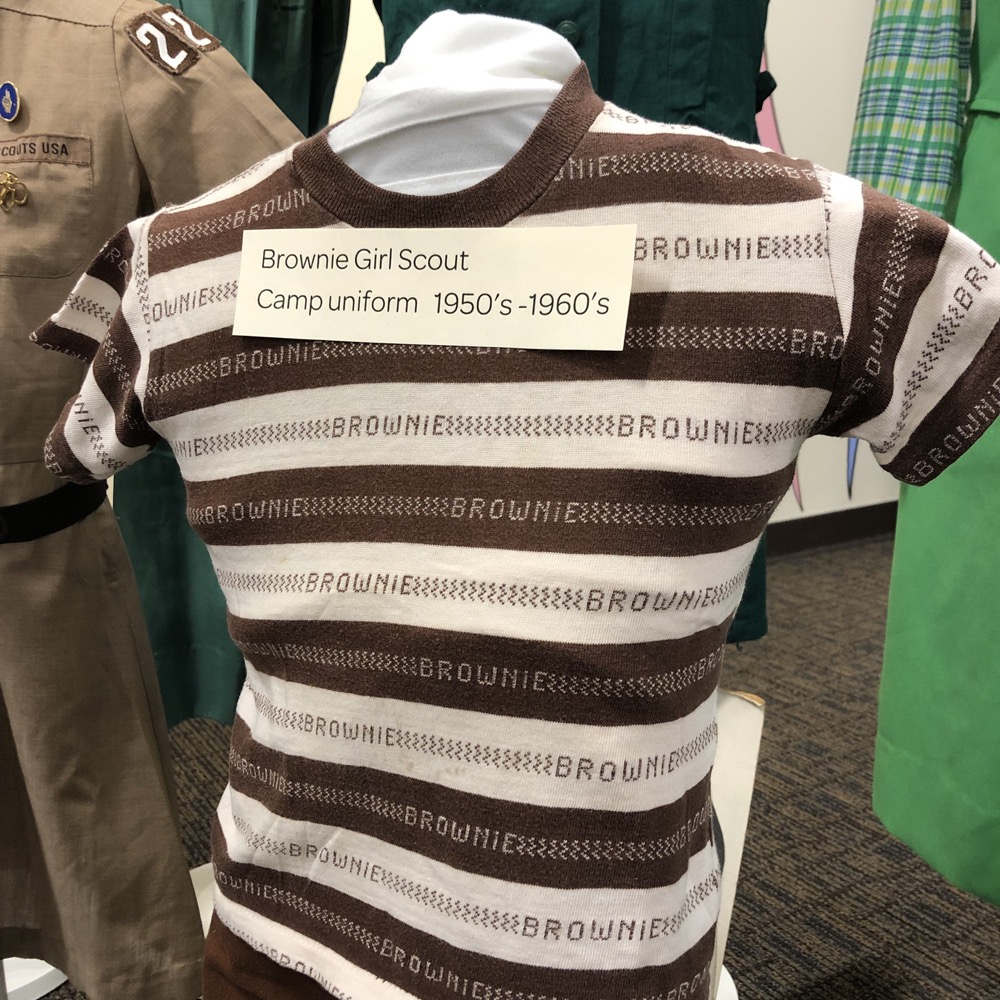 I know that some weird stuff has been happening more recently with scouting and how Boy Scouts now accept girls or something. (Around the world in most countries, scouting is a mixed gender pursuit – so this isn’t really a big to-do.) But for a brief moment in time in North Haven, I had a daughter and there was no discussion of “woke gender norming,” the financial ruin of Boy Scouts due to sexual abuse lawsuits, or the waning interest in scouting in today’s cell-phone and social media society. It was rather nice.

No, Mary and I had a good time rolling through history; the empowerment of young women, fashion trends, and the importance of life skills learned through scouting. Huge thank you to Mary and the woman who found her and to the McGuffs for making this random little hard-to-access museum a reality. 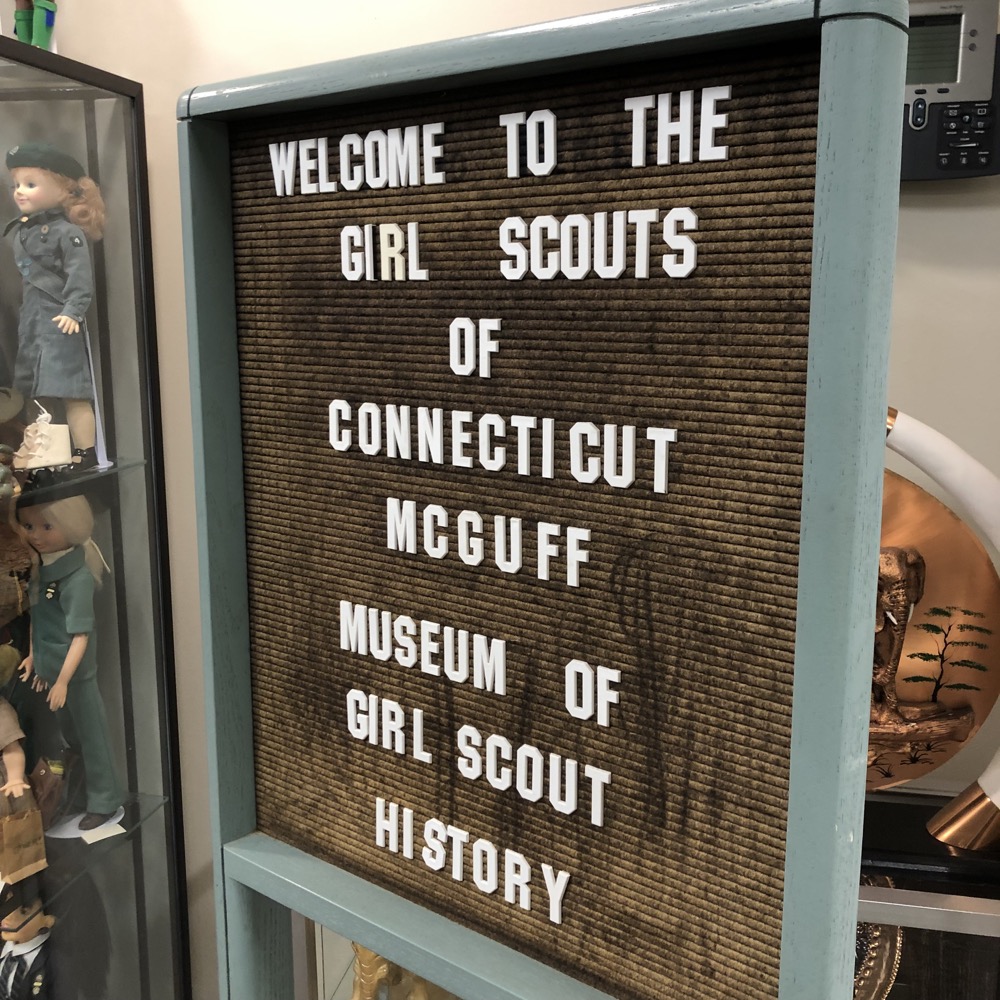 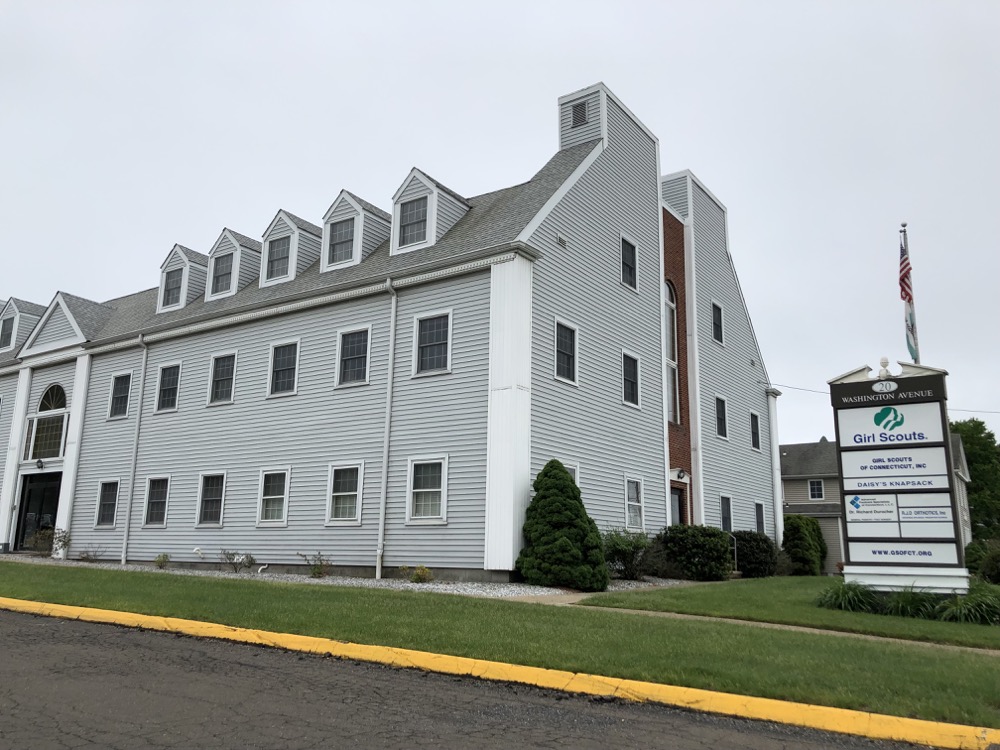